Exeter City travel to Swindon Town for their first away game of the League Two season. It will be the first time they have met Swindon in a League fixture since March 2011 when a Ryan Harley penalty saw the Grecians collect all three points at St James Park

The County Ground has been the home of Swindon Town since 1896. The current capacity of 15,728, all-seated, has been at that level since the mid-1990s. The postcode for the sat nav is SN1 2ED

Grecian Travel coaches will depart from Unit 1 Nightclub at 10.30am on Saturday, August 12. Ticket prices are as follows:

Other pick-up points include: Honiton Road Park & Ride (by Miller & Carter steak house), Cullompton Services (Junction 28), Tiverton (Junction 27), Taunton (Junction 25). Any other pick-ups need to be booked by prior arrangement.

To get to the County Ground leave the M4 at Junction 15. Take the Commonhead roundabout. Turn left onto the A4259 Marlborough Road. Take the second exit at the roundabout onto Queens Drive. At the next set of roundabouts take the third exit onto County Road - the entrance to the ground is on the first right.

The train journey from Exeter St Davids to Swindon usually requires at least one change at either Bristol Parkway, Bristol Temple Meads or Westbury and will take over just two hours in most cases. Once you have arrived at Swindon train station turn left onto Station Road. Facing the White House pub, head right onto Corporation Street. At the traffic lights turn left onto Manchester Road. At the end of Manchester Road turn right onto County Road. The entrance to the stadium is the second left. This walk should take approximately 10 minutes.

Parking for away fans is located within the stadium complex priced at £10. There are 12 allocated disabled bays. There is also parking at St Joseph’s School behind the Ground on Ocotal Way. A space at the school costs £5. The postcode for St Joseph’s is SN3 3LR.

To collect tickets or to buy on the day, please head to the away ticket office which is located next to the Stratton Bank at the end of the Arkells Stand. You can purchase tickets for the game by clicking here

There are a number of pubs located within the main town centre and within walking distance from the County Ground, although visiting supporters are advised to check in advance which pubs will be available to them. There is an away supporters bar that will be in use for the 2017/18 season. Bar 71 opens from 12pm on a Saturday and 6pm for an evening kick off. Bar 71 is located towards the Stratton Bank at the end of the Arkells Stand. The bar serves both draught beer and lager as well as serving a selection of snacks.

The distance between St James Park and the County Ground is 119 miles, taking just over two hours to drive.

Exeter City drew 1-1 with Swindon Town at the County Ground in their second match of the Sky Bet League Two season.

A first half goal from Liam McAlinden was cancelled out by Swindon Town substitute Kaiyne Woolery in the second half, meaning the Grecians travelled back to Devon with one point after a hard fought encounter.

Paul Tisdale made three changes to the side that suffered a narrow defeat to Charlton Athletic in the Carabao Cup in midweek with Craig Woodman, Jordan Moore-Taylor and David Wheeler returning to the starting line up in place of Troy Archibald-Henville, Jake Taylor and Luke Croll.

City had their first attempt through Holmes, who was making his first league start of the season. The City winger’s effort from distance was on target, but for an important block by the Town defence.

The resulting deflection led to two City corners, and the second seeing Moore-Taylor rise well but the City defender was unable to connect with the ball from close range, despite finding himself in a good position unmarked.

City had another attempt on goal six minutes in when a long ball forward found Liam McAlinden unmarked. Good hold up play with Reuben Reid followed before Jordan Tillson was teed up just outside of the box, but his curled effort was straight at Swindon goalkeeper Lawrence Vigouroux.

It took the home side until just before the 20-minute mark to register their first effort on goal through Harry Smith. After Paul Mullin did well to turn Pierce Sweeney and cross, Smith’s low effort was just wide of Christy Pym’s left-hand post.

City then had a good move down the left-hand side, started by Craig Woodman’s ball forward to Holmes. The winger’s cross was met by McAlinden who did excellently to tee up Reid, who was looking for his second goal of the season, but his volley was mistimed and rolled out for a Town goal kick.

The Grecians then thought they’d scored their first of the afternoon when Sweeney’s header at the back post was then nudged towards goal by Troy Brown, but Town cleared off the line. Despite City’s appeals that the ball had crossed the line they were made to settle for a corner.

City then, deservedly, found themselves a goal to the good on 27 minutes in an extraordinary phase of play. From Chris Hussey’s dangerous free-kick, which was punched away by Pym, which led to a Grecians’ counter-attack.

Reid’s strike from distance was then tipped onto the post by Vigouroux, but thankfully McAlinden was on hand to tap in from close range after finding himself unmarked in the Town penalty area to give the City number 19 his first goal of the season.

The home side then thought they had drawn themselves level moments later when a dangerous cross deflected off of Sweeney’s head and into the City net, but for the linesman’s flag which adjudged there to have been a Town handball in the build-up.

City, who dominated much of the first half, then had another good chance to extend their lead through Holmes. After Sweeney had collected Reid’s pass out wide, he crossed excellently towards the far post, but the incoming winger was unable to keep his header on target.

McAlinden then almost made it 2-0 with a superb piece of link up play with Reid. Sweeney’s pass inside was dummied by McAlinden for Reid as the latter laid it back to his teammate whose curled shot was just wide of Vigouroux’s post which meant City went into the break with their one goal advantage.

City began the second half with the same intent when they had another attempt cleared off of the line, this time by Vigouroux, from Holmes’ dangerous in swinging corner.

But Swindon were keen to put on a performance in front of their home supporters and began to dominate possession in the second half.

A low pass saw Woolery latch onto the ball in behind the City defence after 56 minutes, and despite the onrushing Pym, the Town number 22 poked home to level the match.

Woolery, who often looked threatening with his pace, was then played through on goal as Town broke, but his effort was saved well by Pym as he rushed from goal and Moore-Taylor then did excellently to get back and clear.

Jake Taylor then had a good opportunity for City on 73 minutes when, after good build up play from the likes of Reid and Lloyd James, his curled effort edged just wide of Vigouroux’s goal.

As City continued to search for a winning goal Tisdale looked to youngster Jack Sparkes, who made his competitive debut on 74 minutes, and made an instant impact with a thunderous effort from distance coming back off the post, with Vigouroux well beaten.

Both sides continued to push forwards in search of the all-important winner, City with an excellent chance to snatch the lead on 90 minutes when Holmes burst through to strike well, but for a good save by the Town goalkeeper.

But the scores stayed level as referee Darren Drysdale blew his whistle after four added minutes, to give City a hard-earned point at the County Ground.

Exeter City sold out of tickets for this Saturday’s game away at Swindon Town.

However, tickets are still available for purchase, for away fans, on the day game with no extra charge for buying on matchday.

Whilst not absolutely necessary, if fans would like to book in advance, the number to ring at Swindon is 08718761993 (option 2)

However, fans will be able to pay on the day at the Away Ticket Office, which is open from 1pm. This is situated just 50 yards from the away turnstiles at the Arkells End of the ground. They can take payment by cash or card. 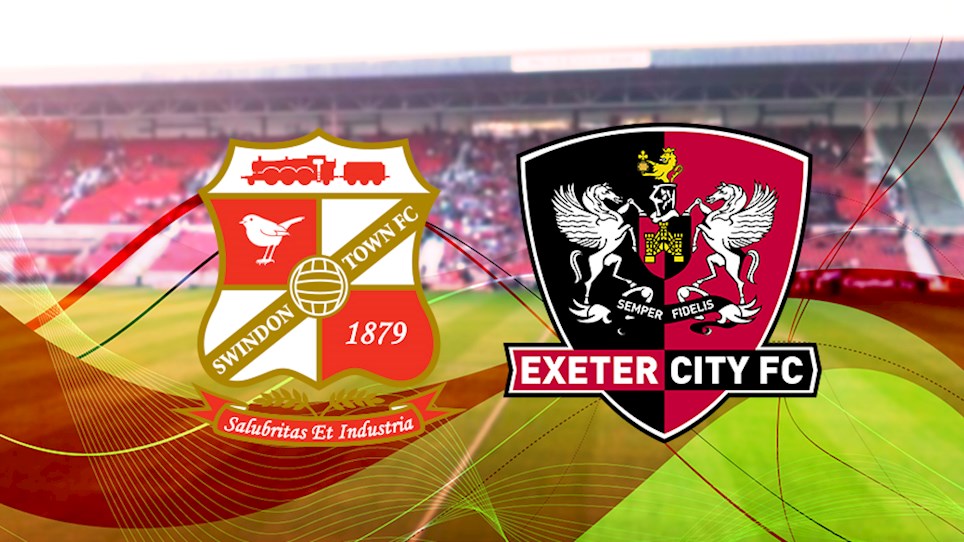 
Tickets now available for the trip to the County Ground