The Grecians go into the match boasting the second best record for home league wins in all four divisions for 2017 with 17 victories.

West Brom, on the other hand, haven’t won in their last 20 matches in all competitions and come into the game on the back of a 2-1 defeat away at West Ham United last time out.

However, City boss Paul Tisdale does not think that will have any bearing on the game.

“Whatever they have done over the past few games is irrelevant,” said Tis. “They are a Premier League side with professional people who want to do their best. So I think we are looking forward to it and I think we realise that it is going to be a very tough game.

“We start the game trying to win it, but we want to do ourselves justice, play really well and give our supporters something to cheer about. We are expecting a really tough opponent that has got a lot more experience and international caps and everything else that goes with being a Premier League team.”

“For us it will be something to build on and gain momentum from. I don’t think it’s going to relieve the pressure of winning in the Premier League," he said.

“But it’s important we win and get into the fourth round and create some kind of excitement for our fans, some kind of hope for them. We’ve got 350 fans going there and we need to deliver for them.”

The match is sold out, meaning there are no tickets left to purchase in the IP Office or Thatchers’ Big Bank. If you have ordered your ticket for collection please go to the ticket booth in Red Square, near the club shop & reception to collect.

If you are in the IP Office Stand on Saturday the Red Legion have organized a show your colours display for fans to get involved with. All the information can be found on this article.

Thank you to our match sponsors RGB Building Supplies, Gregory Distribution and City Plumbing. All three companies have been long-standing supporters of the Grecians and you can find out more about them by clicking on their name in this article.

We also have two ball sponsors for the game: Thatchers Cider and St Austell Brewery. Again both companies are long-standing supporters of the Grecians and you can find out more about what they offer by clicking on their name.

The Centre Spot bar is open to both home and away fans during matchday. After full-time there will be an offer of a four-pint pitcher, of Carlsberg, Thatchers or selected stocks, for £10 while stocks last. 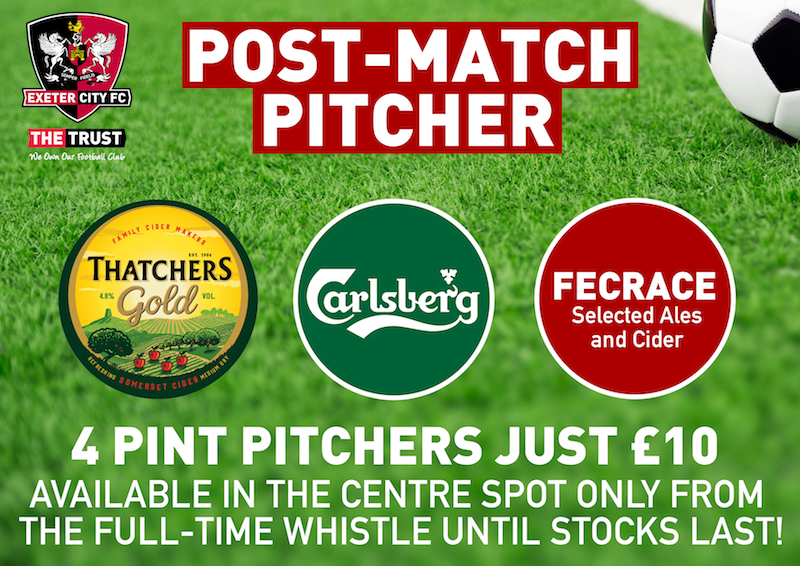 The bar has big screen TVs and will be showing Fleetwood Town v Leicester City match before the game and the Norwich City v Chelsea game after full-time.

A special 84-page perfect-bound edition of the Grecian has been produced for our FA Cup match, with interviews from Ryan Harley and Alan Banks.

There is also a full guide to West Brom and all the usual features including a special FA Cup poem from our resident Bard of ECFC Rob Casey. You can pick this up around the ground, including the club shop & reception, for just £3

The Junior Grecians family zone will be open to its members from 12.30pm on Saturday and to the general public, including away supporters, from 1.30pm. The zone has video consoles, large TV screens a refreshement stall and table football.

Supporters in the IP Office stand are also advised that the kiosk in this zone is open for supporters of all ages to use to get their half-time refreshments. You will find the queues in the family zone to have less waiting time than those at kiosks in other areas of the ground.

The Junior Grecian Family Zone is not open to members of the public after the game has finished.

Charlie Todd: Charlie is 10 and is football crazy. He trains at the ECFC performance centre and enjoys watching and supporting Exeter City and Chelsea. His favourite player for the Grecians is Jordan Moore-Taylor

Ross Blackmore: Ross is the third generation of his family to follow the City after his dad and grandad.  Ross enjoys football, boxing and playing his Xbox. He watches city both home and away and his favourite City player is Lee Holmes

The club shop will be open from 11am to 5.30pm for all your City merchandise needs! The club shop is located in Red Square, at the back of the IP Office Stand.

It was Albion’s first half dominance that inflicted the damage on City as early goals from Salomon Rondon and Jay Rodriguez were enough to send the Premier League side into the fourth round, despite Christy Pym’s fine penalty save.

City manager Paul Tisdale made two changes to the side that fell to defeat against Newport County on New Years Day with Lloyd James and Craig Woodman being replaced by Liam McAlinden and Hiram Boateng in the starting line-up. Meanwhile, Albion boss Alan Pardew named a strong starting XI for the visitors.

Albion went in front just 72 seconds after kick-off when City failed to clear Chris Brunt’s teasing cross and the ball fell to Salomon Rondon on the edge of the City area. The striker curled a first time effort into the top corner which Christy Pym got a hand to, but couldn’t keep out.

City had their first chance of the game after 15 minutes when Jayden Stockley failed to connect with a fine, curling cross from McAlinden which had caused problems for the Albion defence.

Soon later, Albion doubled their advantage when Hal Robson-Kanu’s cross led to a mix-up in the City defence which allowed the lively Rodriguez to latch on to the loose ball and poke home from point-blank range, leaving Pym with no chance.

Just seconds later, the visitors thought they had scored a third when Rondon nestled the ball into the bottom corner, but the flag had already been raised for offside against the Venezuelan striker.

Albion were then denied what looked to be a certain goal when Pym pulled off a stunning save to prevent McClean’s close-range effort from rippling the net.

Pym came to City’s rescue again late in the first half after Albion were awarded a penalty for Pierce Sweeney’s foul on Rodriguez. But substitute Robson-Kanu failed to convert from the spot as Pym dived to his right to make the save.

City very nearly reduced the deficit on the brink of half-time when McAlinden’s awkward cross was fumbled by Ben Foster and the ball fell to Stockley. The City striker was faced with an open goal from a tight angle, but he failed to squeeze the ball home as his effort cannoned off the post.

Soon after half-time, Albion had another goal disallowed when Ahmed Hegazi bundled the ball into the net after the linesman had flagged for offside.

Albion were not as dominant in the second half and this allowed City to gain a foothold on the game. The hosts went close to pulling one back when Dan Seaborne failed to connect with Boateng’s swinging free kick after it fell to the defender at the back post.

After a spell of City pressure which saw both Jordan Tillson and Dean Moxey go close, Robson-Kanu was then sent through on goal but City’s defence forced him to rush his effort and he half-volleyed wide.

As the game drew to a close, City battled hard to look for opening but the Albion defence held firm to end City’s Emirates FA Cup adventure for another season.

Phase 4 of sales for City's Emirates FA Cup third round match against West Brom have now started (Friday, December 22, 2pm). Phase 4 is online sales only, over the festive period.

This phase will be for all gold, silver and bronze members and community members*

*Defined as anyone registered on the ticketing system on the day of the 3rd round draw (plus anyone who subsequently registered and bought a ticket for the replay).

Phase 4 will have a limit of 2 tickets per person (two tickets per member on top of those they may have already purchased).

In-person sales for phase 4 will start at 10am on Wednesday, December 27, from the ticket booth at St James Park, as normal.

During the online only sales period, a portion of Big Bank tickets will be held back from sale to ensure there is availability for anyone wishing to purchase in person from December 27.

Please note, there will be no FA Cup sales on Boxing Day, this will be normal match day operations only.

There is still no planned general sale release, this will only happen subject to availability and closer to the game itself.

Having issues purchasing online? Please click here to view a guide on how to buy West Brom tickets online. 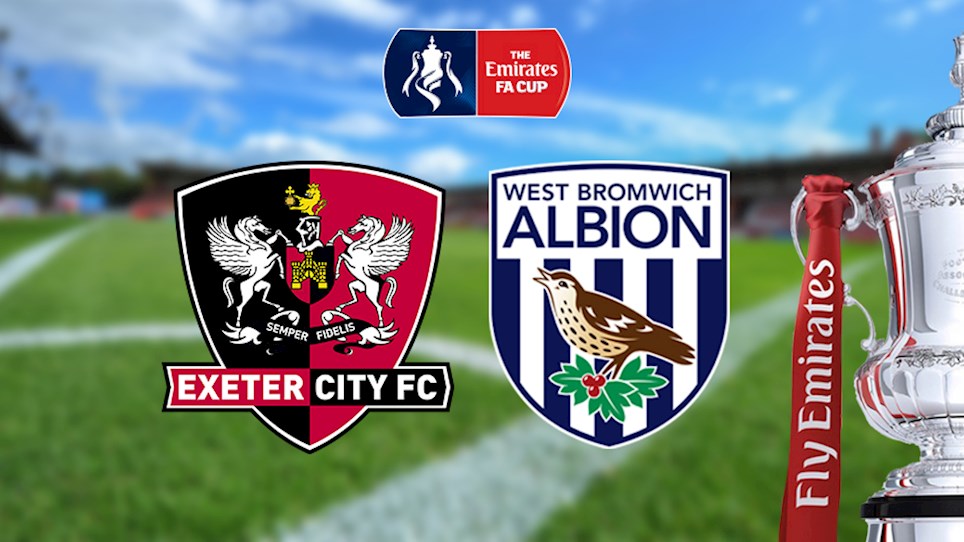 
Tickets for Exeter City’s match at home to West Bromwich Albion on Saturday, January 6, are now on sale to gold, silver and bronze members and season ticket holders.