The tie is evenly balanced after the 0-0 draw at Sincil Bank last Saturday meaning it’s a winner takes all affair as both sides look to book a place in the play-off final at Wembley.

Speaking ahead of Thursday night’s match, manager Paul Tisdale says the Grecians will have a strong squad to choose from against Danny Cowley’s side.

He said: “No one was injured from Saturday which is really good news and Troy Brown has had another week training. He’s close enough to be selected which poses a decision for me.

“That’s what you want as a manager, players who are in the team playing well and players not in the team training well. We are still without Lee Holmes, but apart from that, we’ve got a pretty well functioning team at the moment.

“I think we all know it will come down to the second half of the second game, it often does. You have to make sure you are in the game and you need to respond or make your advantage pay.”

The match at St James Park has already sold out ahead of Thursday but supporters without tickets can watch live on Sky Sports.

We would like to thank our match sponsors: Thatchers Cider, City Plumbing Supplies and RGB Building Supplies

Turnstiles will open 15 minutes early, from 6.30pm, on Thursday to allow extra-time to get into the ground. We recommend that you come early to avoid missing any of the action.

Due to the match being a sell-out, and the possibility of extra time and penalties, two additional services will be provided which are as follows:

We will have a special play-off semi-final matchday programme on Thursday evening. Inside is an extensive feature interview with Director of Football Steve Perryman conducted by Media Manager, Simon Larkins, as Steve discusses his time at City and the work he has done at the club over 17 years. In the interview you can also hear from former Grecians, Liam Sercombe, George Friend and Ollie Watkins as they pay tribute to Steve. Also, inside the programme, Ben Strange gives you the lowdown on our opponents and their recent form going into the semi-final second leg. There is also content regarding what the City Community Trust are up to over the summer and how you can get involved and we also look back at every single League Two play-off final, courtesy of Leigh Edwards.

You can pick up a copy of The Grecian for £3 in and around the ground on Thursday evening.

The Junior Grecians family zone will be open to its members from 5.45pm tonight and then to the general public, including away fans, from 6.45pm. The zone has video consoles, large TV screens, a refreshments stall and table football. 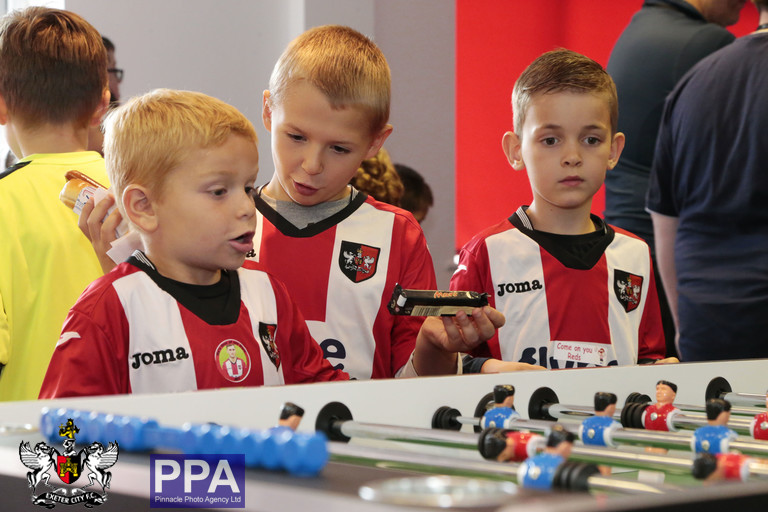 You can read their profiles in the matchday programme on page 11. If you would like to be a matchday mascot next season then make sure to be in contact with our operations manager Andy Gillard via email at andy.gillard@ecfc.co.uk

We currently have a sale on at the club shop so if you would like to purchase any Exeter City merchandise, or a matchday programme then be sure to visit the club shop which will be open from 8.30am-30 minutes after the match

Ticket collections will be availalbe from 5.30pm on Thursday evening.

After taking the lead through Stockley’s strike in the first half, Boateng and Harley both fired home in style after half-time to put City three goals in front. Matt Green then scored a late consolation goal for the visitors, as City outshone the Imps on the night.

The Grecians made one change from the side that battled to a goalless draw in the first leg at Sincil Bank, with Robbie Simpson replacing Lloyd James in Paul Tisdale’s starting line up.

Both sides looked to make a quick start in what was an electric atmosphere at St James Park, and it was City who had the game’s first chance through Robbie Simpson.

Boateng threaded a neat ball into the feet of Stockley, whose deflected cross found Simpson in the box. The striker looked to steer the ball towards goal on the turn, but his effort was narrowly wide of the near post.

In response, Lincoln looked to make their presence felt when Alex Woodyard’s long ball was met by the head of Michael Bostwick in the penalty area. Bostwick’s lofted header landed to Matt Rhead at the far post, but he couldn’t adjust his body to direct any meaningful effort at goal from close range.

City then applied a period of sustained pressure on the Lincoln back line, which included a couple of long-range efforts from Ryan Harley, as well as a fine save from Ryan Allsop to keep out Jordan Storey’s bullet header.

City’s persistence then eventually paid off as they took the lead in the 26th minute. Jordan Moore-Taylor’s long ball was knocked forward to Pierce Sweeney and the defender calmly nodded the ball to his right, and into the path of the oncoming Stockley. City’s top scorer was first to the loose ball and he then rifled the ball home from a tight angle to send the Big Bank into raptures.

Soon later, it appeared that Elliott Whitehouse had pulled the Imps level before the goal was ruled out by referee Darren England, who adjudged there to have been a handball in the build-up.

Seconds after half-time, the tie was lit up by a moment of genius as Boateng doubled City’s lead in style.

The midfielder, who was at the heart of everything for City, surged forward from inside his own half and found space some 30-yards from goal. He then cut inside and curled a stunning shot which soared past the helpless Allsop and into the back of the net after a deflection off the left-hand post.

Lincoln then pushed forward as they looked to find a way back into the game. Their spell of pressure culminated in a decent chance for the visitors where the ball was headed back and forth in the City penalty area before Rhead’s headed effort was gratefully claimed by the rising Christy Pym.

At the other end, Ryan Harley responded by producing a moment of his own magic to hand City some comfort on the 70th minute.

Sweeney picked out the midfielder from a throw-in and then it was all Harley as he pummelled a sublime half-volley from 30 yards out. The ball sailed in to the top corner to hand City a three-goal cushion in remarkable fashion.

Minutes later, Lincoln struck back as Matt Green gave the visitors a glimmer of hope with 10 minutes remaining. Green pounced on to Rhead’s flick-on and then dinked the ball past Pym to set up an interesting finale at St James Park.

The visitors gained confidence from Green’s strike and looked to capitalise on their new-found momentum with a flurry of opportunities in the closing stages. It was Green again who had the pick of the chances to add to Lincoln’s only goal.

However, City’s defence held firm to ensure the Grecians booked their place at Wembley for a second consecutive season.