Exeter City face Accrington Stanley at home this Saturday aiming to get back to winning ways having suffered back-to-back defeats.

Stanley sit third in the table, four points and one place above City. However, Grecians manager Paul Tisdale says it is too early in the season to start talking about six-pointers yet.

“I don’t think we are in that sort of territory yet where we have to start talking about six pointers,” said Tis.

View all of Paul Tisdale’s pre-match thoughts, where he demands a response in mindset from his team below

There are a limited number of tickets still available in the IP Office Stand, as of Friday morning, but we urge fans to buy these in advance as it is more than likely that stand will sell out before kick-off.

There should still be standing tickets available in the Thatchers Big Bank on matchday. However, there is a £1 increase on the day of the game from those purchased in advance.

Fans can purchase tickets by calling 01392 411243 or by clicking on the following link. Tickets will then be available to collect on the day from the ticket booth in Red Square.

We are pleased to welcome RGB Recruitment as our matchday sponsors. It is the second match RGB Recruitment have sponsored this season as they were also match sponsors for our 4-1 victory over Morecambe. A good omen perhaps. RGB are specialists in constructions recruitment. You can out more about them by clicking here.

Exeter City’s Pierce Sweeney is the feature interview for this Saturday’s programme as he talks about settling to life in the Westcountry and his regular right-back role at the club.

There is all the usual 92 pages of content where you can find out what links Kalamazoo Kingdom with City and what Jimmy Giles first, best and worst moments of his career were.

You can pick up a copy of the matchday programme in the club shop & reception and the ground for just £3.

Now that the Exeter City shop/reception has been refurbished, the Exeter Foodbank collection point has made a welcome return, just in time for Christmas.

The club has been without a collection point for a while now, so we are looking to make up for lost time, to help support those in our community that are most in need over the festive period.

Donations can be made at the donation point in reception/club shop at St James Park, between the hours of 9am to 5pm, monday to friday, or 11am to 5pm on match days.

Exeter Foodbank was started in 2008 to help local people, many of whom had been affected by the financial crisis and subsequent downturn in the economy. City have been supporting Exeter Food Bank over the last few years, and your generosity makes a real difference to people’s lives in the local community.

All donations are welcome, but priorty items for November include:

You can read all their profiles on page 39 of the matchday programme.

The club shop will be open from 11am to 5pm on matchdays. The club shop is located in Red Square at the back of the IP Office Stand.

Goals either side of half time from Hiram Boateng and Pierce Sweeney were enough for the Grecians to take victory over a battling Accrington side.

Paul Tisdale made three changes to his starting XI as the Grecians looked to get back on track following the defeat away to Crawley Town in midweek. Kane Wilson, Liam McAlinden and Jayden Stockley all came into the side in place of Craig Woodman, Kyle Edwards and Reuben Reid.

City’s first effort at goal came inside four minutes after Jake Taylor had an effort from distance blocked well by Ben Richards. After good hold-up play from Liam McAlinden, Taylor found space and shot on target but for the interception from the Accrington defender.

Soon after, the City midfielder had his second attempt at goal after a knock down from McAlinden from Hiram Boateng’s cross on the left saw Taylor shoot over.

Another chance came seconds later when McAlinden latched onto a long throw to find himself with just Accrington keeper, Aaron Chapman, to beat from a tight angle but the City number 19 could only shoot wide.

Taylor then had his third and his closest attempt on 19 minutes when he received the ball at the back post following a deep free-kick and fired against the crossbar.

For much of the half the away side were reduced to only a couple of chances at Christy Pym’s goal. Sean McConville saw his free-kick edge just over, before Kayden Jackson saw his header from close range well saved by the City keeper.

A succession of free-kicks for the away side almost ended in John Coleman’s team taking the lead on 39 minutes when Mallik Wilks saw his effort go just wide after good pressure from the onrushing City defence.

City captain, Jordan Moore-Taylor, then did excellently to drive the Grecians up field before his curling cross skimmed the head of McAlinden who couldn’t steer his effort towards goal.

A late flurry in the last few minutes of the half saw the Grecians go close and finally take a deserved lead when Boateng rifled home.

Initial good play from McAlinden eventually saw Stockley in a good position to pull the ball back centrally with Boateng timing his run perfectly before he side-footed home into the top corner.

Callum Johnson had the first opportunity of the second half for the away side on 49 minutes when the ball was kept alive from an Accrington corner, before the midfielder drove his shot towards the near post, but hit the side netting.

McAlinden was then presented with a golden chance to increase City’s lead a few moments later when he was found by Lloyd James, and went through with just Chapman to beat, but could only shoot straight at the Accrington keeper.

The away side began to dominate the ball and tested the Grecians’ back line in the air at every opportunity. But credit to the organisation of Moore-Taylor and Troy Archibald-Henville, who had replaced Troy Brown earlier in the match, as both central defenders battled doggedly.

Moore-Taylor then made a brilliant block in the six-yard box on 75 minutes when Farrend Rawson shot towards goal amongst a scramble in the City box as the Grecians fought to hold onto their advantage.

The away side then had Chapman to thank when he made a brilliant double save when McAlinden went down the right and shot low but for the keeper who then got back up to deny Stockley’s rebound as he kept his side in the match.

Five minutes from time City were given the perfect chance to double their lead from the penalty spot after Jayden Stockley went down in the area after being pulled back by Mark Hughes.

Pierce Sweeney then stepped up to fire his effort into the bottom left corner to put the Grecians in control of the match going into the final few minutes as they took all three points at St James Park.

A small amount of seated tickets are now available in the IP Office Main Stand for Saturday's match against Accrington Stanley, due to Stanley not taking up their full allocation.

The seats are in Block L of the IP Office Main Stand, and can be purchased online by clicking here. 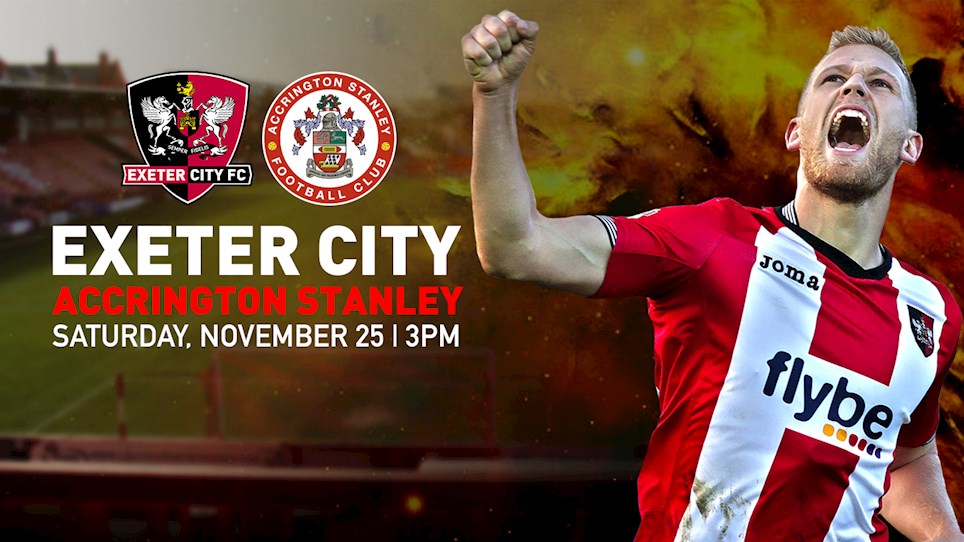 
The IP Office Main Stand has sold out for City's match against Accrington Stanley on Saturday, November 25.