Exeter City make a midweek trip to Moss Rose as they take on Macclesfield Town in Sky Bet League Two.

Fresh from their 1-1 draw with Cheltenham Town, the Grecians are back on the road as they take on Sol Campbell’s side in a fixture that had to be rearranged due to a waterlogged pitch back in March.

Ahead of the match, manager Matt Taylor said: “It’s going to be a tough game, they always are this time of year. The pressure continues to mount, we’ll be in and around it and it’s our game in hand so we’ll go there, hopefully with a clean bill of health, obviously Christy (Pym) is not available but the rest of the group will be better from Saturday.

“We were motivated after the defeat last week (to Mansfield) and we should be even more motivated for Tuesday now."

The sides last met back in November at St James Park when the Grecians slipped to a 1-0 defeat. City were unable to find the net on the night as Harry Smith’s goal from close range was the difference. 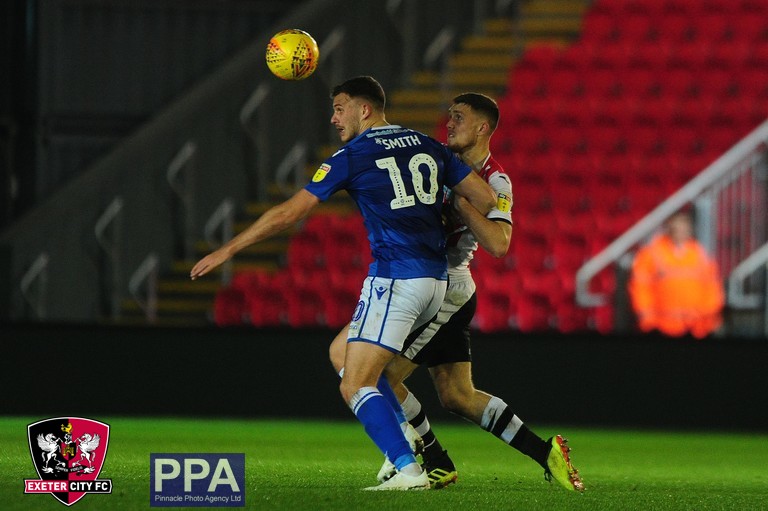 Macclesfield Town will handle all away tickets sales from visiting supporters on the evening of the game and as a result no advance purchases are available.

Tickets on the day and night of the game are cash only, but there is cash machine next to turnstiles.

There is no advance discount for buying tickets at Moss Rose and the prices are as follows:

*Must be accompanied by an adult.

***A valid ID may be required

You can purchase a match pass on iFollow in both the UK and overseas at the cost of just £10. The stream includes the live BBC Radio Devon commentary. 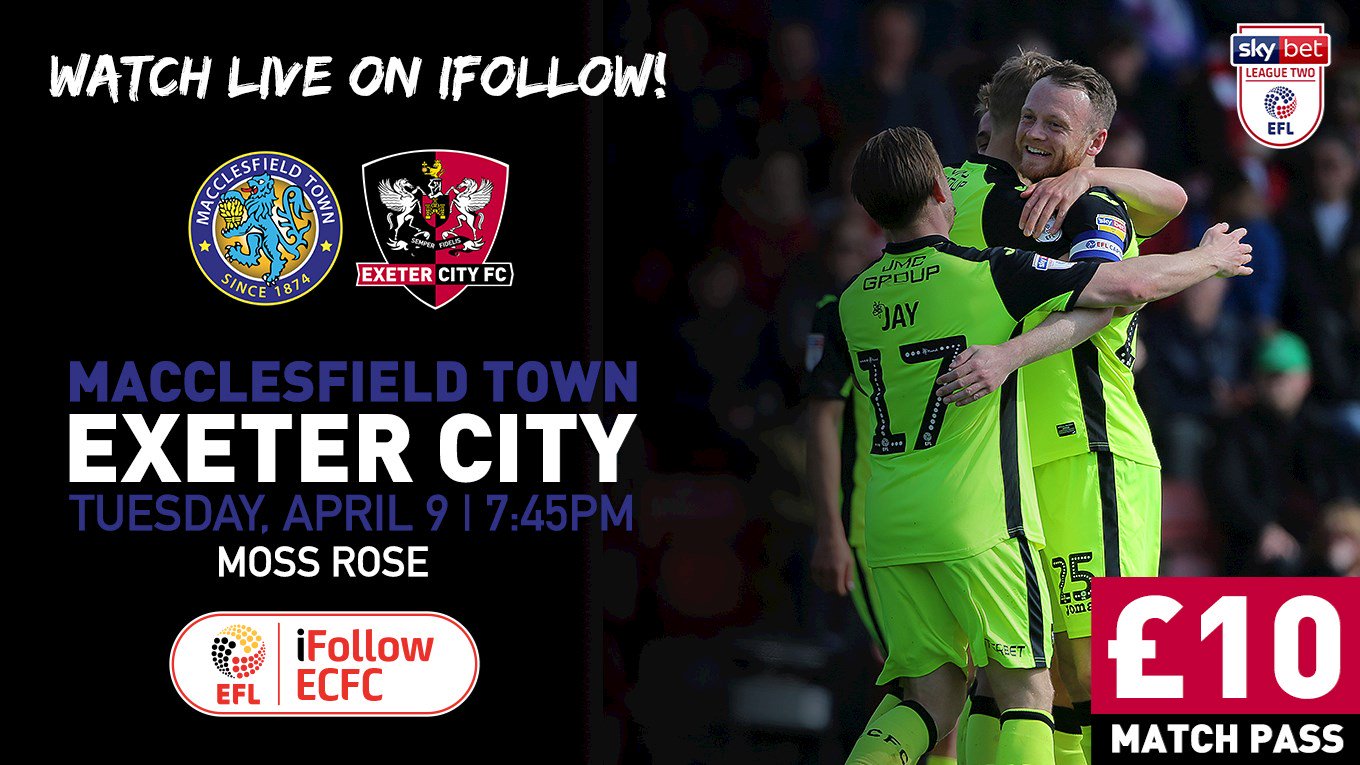 The supporters’ coach departs at 1:00pm from Unit 1 nightclub for a fare of £33.

A trip to the north west for the Grecians means from Exeter you need to take the M5 north before joining the M6 north before leaving for the A500 at Hanchurch. This will take you through Stoke-on-Trent then you need to take the third exit for the A34 on the major roundabout. Continue along this road for a while continuing over a series of roundabouts before joining the A536 which takes you all the way up towards the ground before you need to take a right turn onto Moss Lane where the ground is. According to Macclesfield Town’s website, There is ample road side parking in the immediate areas around the ground. The club asks supporters to be advised to check for double white and yellow lines. A very safe place to park is in the Lyme Green Retail Park, which is only about 300 yards south of the ground down the London Road or on the London Road itself.

The nearest station is Macclesfield. Leave the station and turn left up Sunderland Street until you reach a major crossroads at the war memorial. Take a left here and follow for roughly a mile. The ground is immediately in front of you with the away ticket office is located immediately to the left of the ground next to the Silkmen Cafe. From Exeter St David’s you can take the 14:48 train, with no changes, all the way to Macclesfield which takes around four hours so should get you there for 18:36. If you wish to get there earlier, the 13:24 train from Exeter, which then requires one change at Birmingham New Street, can get you into Macclesfield for 17:36. Unfortunately there are no train that will directly to return to Exeter from Macclesfield which depart after the final whistle.

According to footballgroundguides.com there aren’t a great deal of pubs and food outlets around the stadium due to it being outside the centre of Macclesfield. The closest pub is the Golden Lion, which is just under a 10-minute walk from the away turnstiles. It serves real ale and on match days and there is food on offer. There are also a range of refreshments available from the stadium.

Despite Ryan Bowman notching his first and second goal for the Grecians, two strikes from Harry Smith and a Michael Rose penalty meant that City were unable to take advantage of their game in hand in the race for the play-offs.

Manager Matt Taylor made three changes to the side that started the draw at Cheltenham Town last time out, with Lee Martin making his first start since early February following injury. James Hamon also replaced the suspended Christy Pym, whilst Hiram Boateng came into the centre of midfield.

The Grecians started brightly and dominated possession in the early stages and they had the first chance of the game when Jake Taylor’s shot deflected off a Macclesfield defender and looped up for Lee Martin to volley but Kieran O’Hara collected in the Town goal.

Elliott Durrell then had the ball in the net in the 10th minute after he peeled away behind the City back line, and despite finishing into the bottom corner, the winger was adjudged to have been offside.

Both sides continued to get into positive positions on the field, but neither were able to create too many clear-cut chances at goal. Moxey had a sight at goal when a corner broke to him on the edge of the box, bit his curled effort edged over.

But it was City who churned out the first moment of real quality when Lee Martin combined with Boateng before getting in down the left and crossing to the far post for Bowman to head home from close range to register his first goal in a City shirt.

The Grecians weren’t ahead for long though as just a few minutes later the hosts levelled through Smith. A cross from the left-hand side managed to evade Moxey and Hamon before the Town striker headed in.

In an entertaining period, City then went ahead for the second time when Bowman got his second of the night after latching onto a long ball forward from Hamon, and despite O’Hara rushing out, the forward thumped an effort home from the edge of the box.

Just a couple of minutes before half-time Troy Brown went inches from giving City a 3-1 lead when he found himself unmarked at the far post, but despite a dangerous ball from Boateng, the City defender was unable to connect.

The game then took another twist in stoppage time during the first half when a long free-kick came into the City box and Moxey fouled Nathan Cameron. Rose then stepped up to convert past Hamon to make the score 2-2 going into the break.

Reece Cole was the first to have an attempt in the second half when he found some space around 30-yards from the City goal, and despite a vicious effort, Hamon tipped over. From the resulting corner Cameron headed towards goal but the City keeper did well to collect as the ball creeped towards the line.

Moxey had the Grecians’ first real chance of the second period on 65 minutes when he managed to escape his marker and rise to meet substitute Matt Jay’s corner, but the defender was unable to keep his glancing header down.

Smith had an excellent chance to put the home side in front when they managed to get in behind the City defence when the ball was played through to the forward, but he was unable to keep his effort on target as he sent the ball over.

It was Macclesfield who would get the all-important fifth goal of the game on 85 minutes when the home side won the ball back high up the pitch before Durrell crossed for Smith to score his second of the night from close range with a header.

Late chances in injury time fell for Nicky Law, who couldn’t get a clean shot away, before Pierce Sweeney saw a low effort drift just wide of goal meaning the Grecians returned to Devon unable to take advantage of their game in hand.