Exeter City take the Easter Monday trip to Stevenage looking to bounce back from a Good Friday defeat to Crawley Town.

Ahead of the match, City boss Matt Taylor said: “There are some tired bodies, Pierce looked like he was struggling for the last 10 or 15 minutes (v Crawley.) We’ve got to dust ourselves down, we can only look at ourselves on the back of today, that’s the frustrating thing because we were more than good enough to get something out of the game. We’re good enough to go and get something out of the game on Monday, but it’s put more pressure on ourselves.”

The sides last met back in early October last year at St James Park when the Grecians claimed a 1-0 win with Dean Moxey netting the only goal of the game with a right-footed finish from close range. 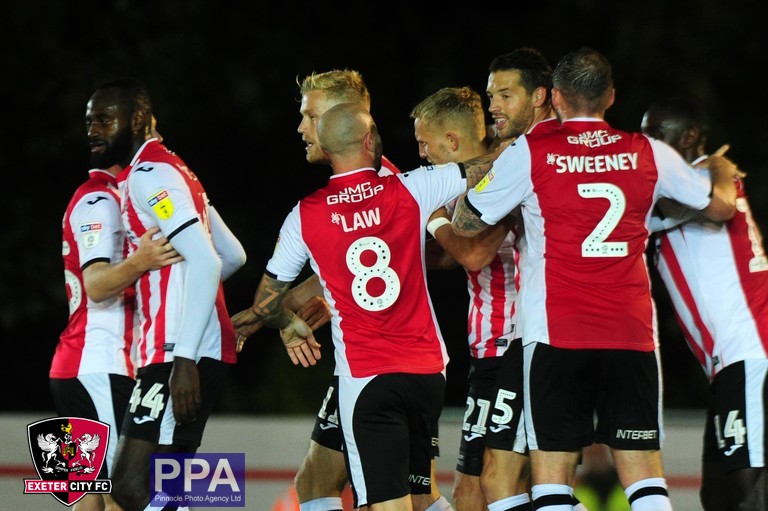 The supporters’ coach will depart from Unit 1 nightclub at 8am for a fare of £30. Pick-up points include: Unit 1 nightclub (Summerland Street), Honiton Road Park & Ride (by Miller and Carter steakhouse), Cullompton Services (junction 28), Tiverton (junction 27), Taunton (junction 25), any other pick-ups en-route by prior arrangement.  The easiest way to buy is online, or on your mobile using the clubs ticketing system.   For more information or to book please contact Chris Woolcott on 01392 250250 or John Bishop on 07904036334 or by email at: john.bishop760@btinternet.com (after 6pm).

To get to Stevenage from Exeter take the M5 north all the way up to the M4 East where you need to travel towards London. You then need to join the M25 clockwise and follow the motorway for a period of time before taking the exit for the A405. Continue along this road before you come to a roundabout and take the third exit for the A414. Follow this road for a while before you meet the A1 which you need to follow before leaving for a main roundabout and the A602 which will take you to the stadium. Free match day parking for 500 cars is available to fans at Fairlands Valley car park to the north of the ground. This is signposted from junction seven of the A1(M). Please then use the signposted underpass to cross the A602 to the stadium, rather than crossing the dual carriageway by foot.

According to footballgroundguide.com, there is a large club house bar at the ground, behind the south stand, which is popular with both home and away fans alike. Otherwise, there is not much in the way of pubs near to the ground. Still, if you like your real ale then it is worth taking the 15-minute walk to the 'Our Mutual Friend' pub in Broadwater Crescent. This pub, which is listed in the CAMRA Good Beer Guide offers seven beers on hand pump, plus real cider.

Exeter City stayed in the Sky Bet League Two play-off places with a well deserved point away at Stevenage.

The Grecians fell behind to a Kurtis Guthrie goal but having levelled through Ryan Bowman before half-time it was City who deserved all three points as they hit the woodwork three times and had a goal disallowed.

City manager Matt Taylor made three changes from the side that lost to Crawley Town last time out. Troy Brown missed out through injury and was replaced by Dean Moxey at the centre of defence, while Hiram Boateng and Lee Holmes dropped to the bench at the expense of Randell Williams and Lee Martin.

Stevenage, who knew that they could leapfrog City into the play-off places with victory, got the first to get a shot on target following an energetic start from both sides. Ilias Chair did well to cut inside onto his right foot and powered a shot goalwards that Christy Pym pushed to safety.

Minutes later and City responded with an effort on target of their own but Pierce Sweeney’s effort, from a half-cleared corner, was comfortably saved by Paul Farnam.

Then, following another corner, that was cleared and played back into the box Randell Williams had a shot well blocked by the keeper but before Bowman could put in the rebound the referee blew for a foul on the Stevenage shot-stopper who was caught by the City winger’s follow through.

Then on 28 minutes came the breakthrough as Chair crossed from the right for Kurtis Guthrie to head goalwards. His initial shot was blocked on the line by Dara O’Shea but as the West Brom loanee was looking to clear the ball on the line the Stevenage player rushed forward to prod home.

City responded well to the set-back though as 11 minutes later they were level. The goal came from a quickly taken corner that allowed Nicky Law to slide a pass into Jake Taylor. His effort was blocked by a defender but the ball fell kindly for Bowman who side-footed home for his fourth goal in five games. And the Grecians could have been in front at the break as moments later Williams worked the ball onto his left foot and curled a shot that cannoned off the underside of the crossbar before bouncing to safety.

City started the second half in similar fashion as a superb ball into the box from Craig Woodman saw Williams ghost in and bring a good save out of the home goalkeeper.

Then on 49 minutes, Lee Martin hit a speculative effort from 35 yards that cannoned off the top of the crossbar, before Emmanuel Sonupe fired a good chance over from inside the box in reply.

However, for the majority of the second half, it was City who controlled proceedings with  Taylor having a close-range shot blocked after Martin fed the ball to him in the box with an intelligent pass.

Then Woodman almost grabbed a goal as his shot from just outside the area took a deflection on its way to goal, that almost wrong-footed Paul Farnam.

And with the scores level with 10 minutes to go, the home side gambled sending on striker Alex Revell for full-back Luther Wildin but it was City who created the only two chances of note in the closing stages.

First Bowman thought he’d won the game when he tapped home Williams’ shot that had cannoned off the post – only to be denied by the offside flag. And then Williams fed the ball into Taylor eight yards out but he could connect with the cross with any conviction and the ball ended up behind for a goal kick.