Exeter City kick off their 2018/19 Sky Bet League Two campaign as Carlisle United make the trip to Devon in what will be Matt Taylor’s first competitive match in charge of the Grecians.

After play-off final heartbreak for the second season running, City will be looking to pick themselves up and go again as they welcome John Sheridan’s Cumbrians for the season curtain raiser.

“Everyone is looking forward to it, we are under no illusions about how difficult it will be on Saturday and throughout the season going forward. You want your first game to be at home, you want the fans to get behind you, and then hopefully we can pick up a positive result.”

The sides last met in March in what was a big game at St James Park as the Grecians attempted to chase down the automatic promotion places and Carlisle looked to sneak into the play-off spots. Dean Moxey put City ahead in the first half when he peeled away at the far post to fire in left footed, before Ashley Nadesan levelled for the away side as the match ended 1-1. 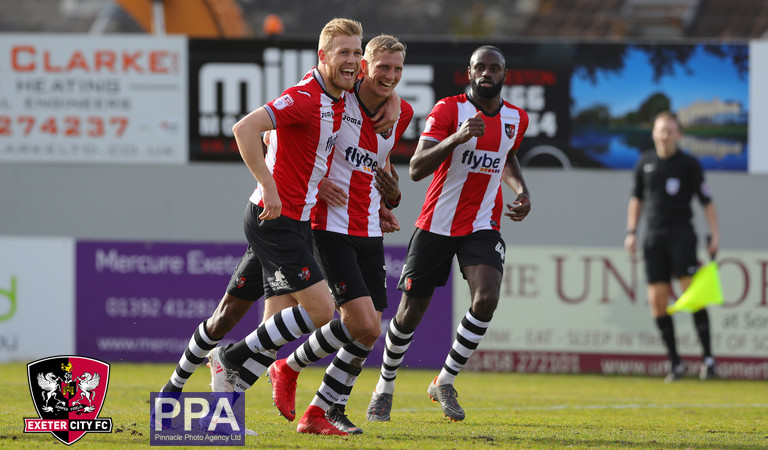 With the ground capacity currently reduced due to the ongoing development work we encourage all supporters to buy tickets as early as possible to avoid being disappointed on the day of the game.

We would like to welcome our matchday sponsors RGB Building Supplies and Bidfood to our opening game of the season.

For more information about any of our sponsorship opportunities please contact Matt Kimberley at matt.kimberley@ecfc.co.uk

Turnstiles will open from 2pm. 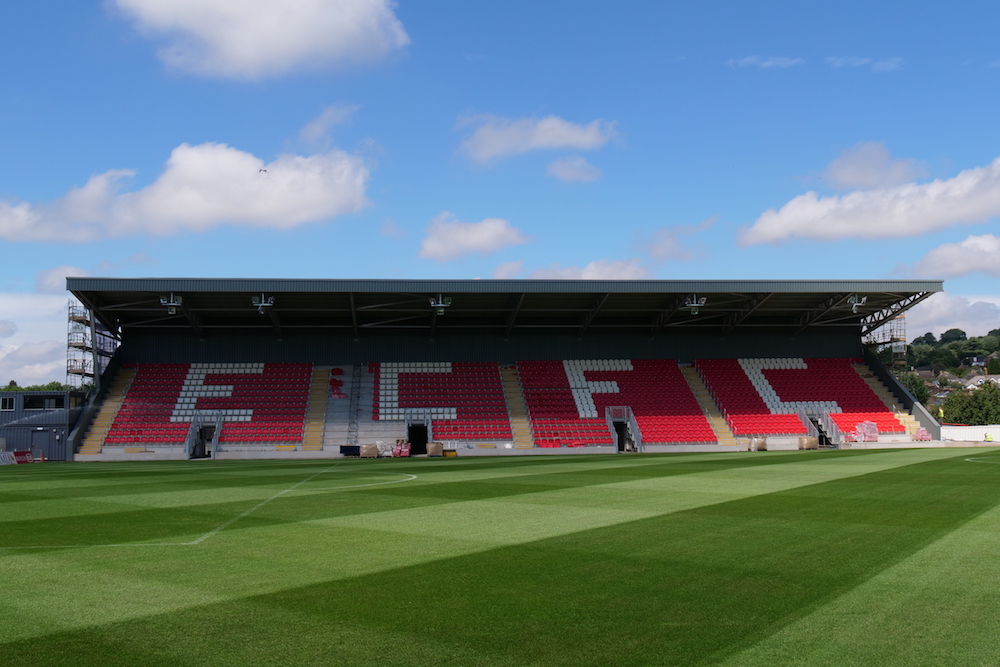 Our matchday programme, The Grecian, has been redesigned for the 2018/19 season with some exciting content included and can be purchased for just £3 in and around the ground. Inside you can read an exclusive feature interview with new club captain Jake Taylor as he reveals his excitement about taking the new role.

Also, inside is our new quiz section where you can take part in various quiz games, not to mention 10 questions on our magic midfielder, Hiram Boateng.

You can also keep up to date with what the City Community Trust have been up to over the summer holidays so far, and how you can get involved. Lifelong City fan Tony Morris returns with his regular feature as he discusses England’s World Cup campaign, and you can also hear from local journalist Matt Bamsey as he previews a new era for the Grecians.

The Junior Grecians family zone also returns this season with opening time at 12:30 for members and 13.30 for the rest of the public. The zone has video consoles, large TV screens, a refreshments stall and table football. 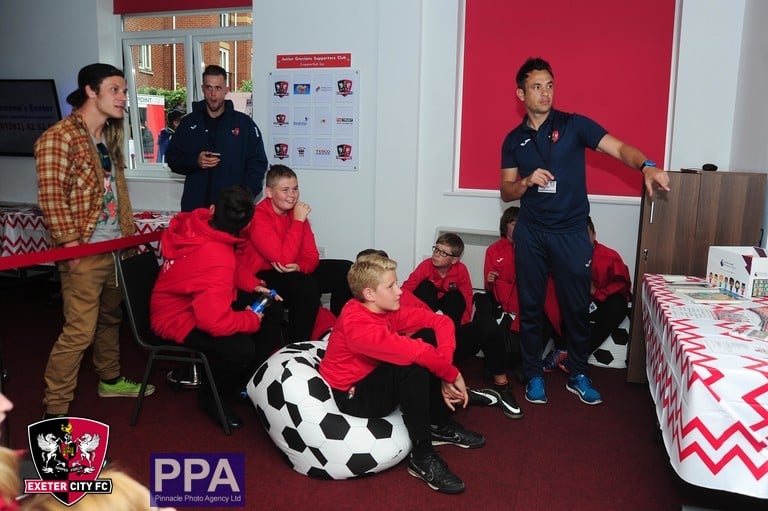 You can read their profiles in the matchday programme. If you would like to be a matchday mascot this season, then make sure to be in contact with our operations manager Andy Gillard via email at andy.gillard@ecfc.co.uk

The club shop will open from 11am to give you the opportunity to make some purchases ahead of the match and will close at 17:30.

Exeter City are urging fans not to leave it to chance and book their tickets to watch Matt Taylor's first competitive match in charge of the Grecians in advance.

Due to the reduced capacity in the Thatchers' Big Bank for the season opener, the club has a limited number of tickets left in the standing areas. Click here to find out more.

Exeter City got their 2018/19 season off to a positive start with a 3-1 win over Carlisle United at St James Park.

In Matt Taylor's first competitive match in charge of the Grecians, they went ahead in the first half when Nicky Law struck, before Jonathan Forte added another with a composed finish.

United pulled a goal back just before half-time, but were unable to find an equaliser as substitute Tristan Abrahams then sealed the points for City with an injury time goal.

The Grecians named the same side that started last weekend’s final pre-season match with Bristol Rovers as they looked to get off to a strong start on the opening day of the season.

It was almost the perfect beginning for the Grecians in the first minute when Hiram Boateng whipped in a teasing ball towards new striker Forte, but he mistimed his effort as goalkeeper Joe Fryer pounced on the loose ball.

The following quarter of an hour saw little in terms of chances with both sides sizing each other up as both had spells of possession.

The next chance that City created, though, would see them go ahead when Boateng sprung a move from the centre of midfield. He worked the ball well with Law before the latter played in Forte down the left-hand side and the forward crossed well for Law, who continued his run, before side footing a volley home on 16 minutes.

George Glendon would have the visitors’ first attempt at goal soon after when he received the ball on the edge of the box before shooting straight into the arms of Christy Pym.

City had the crossbar to thank on 24 minutes when Danny Grainger’s free kick from the edge of the box crashed off the woodwork and onto the goal line before the Grecian defenders cleared away.

But it was City, who looked dangerous every time they went forward, who would find the next goal just before the half hour mark when a period of sustained pressure saw Law thread in Holmes, who teed up Forte to open his account for the season with a fine finish as he doubled the home side’s lead.

In what was an exciting half of football at St James Park, John Sheridan’s side then pulled a goal back on 37 minutes when the Grecians failed to clear a couple of crosses before another ball came into the box and Bennett made no mistake as he guided his header into the far corner.

Forte was then presented with a chance to double his tally right on the cusp of half-time when he raced through after beating the offside trap. The forward just had Fryer to beat, but he was unable to lift the ball over him as City took a 2-1 lead into the break.

City started brightly after the break and almost enhanced their lead when Holmes cut in from the left before fizzing an effort towards the far corner, but he was unable to keep his shot on target as it edged just wide.

On 52 minutes United had a good opportunity when Hallam Hope darted inside the box before working space for a shot, which seemed to take a deflection off a City defender, nevertheless referee Graham Salisbury awarded a goal kick.

Jayden Stockley then had wonderful chance to get the Grecians' third when he was picked out expertly by Law, but the striker miscued his left footed attempt as it flashed just over Fryer’s goal.

The lively Tristan Abrahams was the introduced just after the hour mark, alongside Lee Martin, and the former created a good chance for himself after some tenacious running before he stung the palms of Fryer from a tight angle as Taylor’s side pushed to restore their two-goal cushion.

But Sheridan's side continued to look for an equaliser and began to see a lot more of the ball in the latter stages of the game, with the City defenders being forced to make a succession of blocks from corners.

Abrahams then confirmed the points for the Grecians when he was played in by Stockley as City broke forward in stoppage time. The youngster kept his cool before firing in powerfully to round off an excellent win.

Exeter City are urging fans not to leave it to chance and book their tickets to watch Matt Taylor's first competitive match in charge of the Grecians in advance.

Due to the reduced capacity in the Thatchers' Big Bank for the season opener, the club has just 749 tickets left in the standing terrace.

There are also a handful of tickets that have now been released in the IP Office Stand. However, there is a chance the match could sell-out in advance of kick-off so we are advising all supporters who want to watch the dawn of the new era at St James Park to get their tickets in advance.

The quickest way to buy tickets for Saturday’s match by visiting: tickets.ecfc.co.uk and the upgraded software is now mobile-friendly.

You can also phone 01392 411243 or visit the club in person during normal office opening hours.

Tickets booked in advance will be avialble for collection on matchday but you can collect them before! 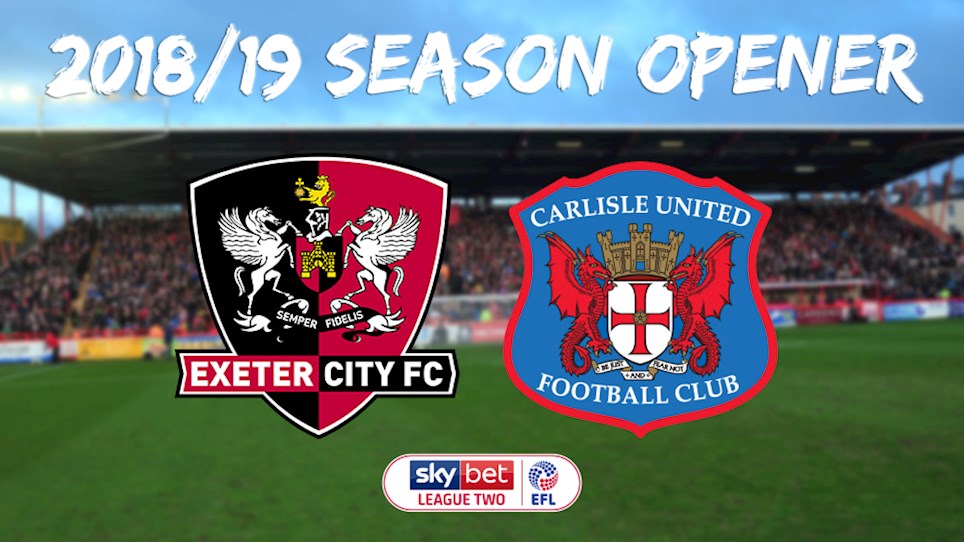 
Due to the ongoing redevelopment at St James Park the capacity of the Thatchers Big Bank will be reduced to 2,640 for the first game of the season against Carlisle United. 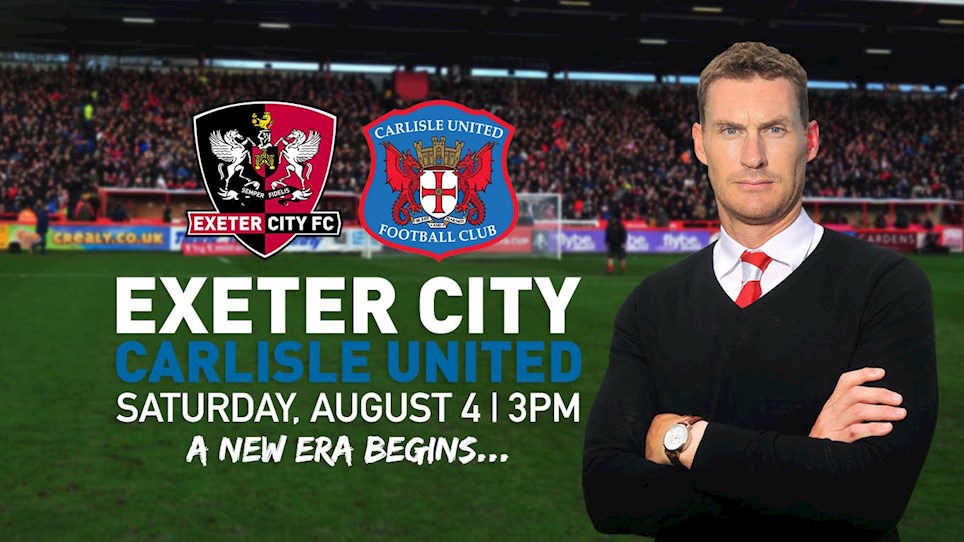