Exeter City return to Sky Bet League Two action when they travel to Gigg Lane to take on Bury.

The Grecians will be looking to bounce back from their last league outing when they fell to defeat at home to Macclesfield Town.

Ahead of the match, manager Matt Taylor said: “It will be a tough encounter. They are in fine form, especially at home, they’ve scored a lot of goals, they play free flowing football, and they’ve got a lot of good attacking players on show.

“We’ve got to back ourselves, we’ve got to a good enough group of players to go there and certainly match them, give them a competitive game, and hopefully come out on top."

The sides last met in February 2015 at Gigg Lane when they played out a 1-1 draw. The Grecians took the lead in the match when they went ahead through Arron Davies in the 13th minutes. 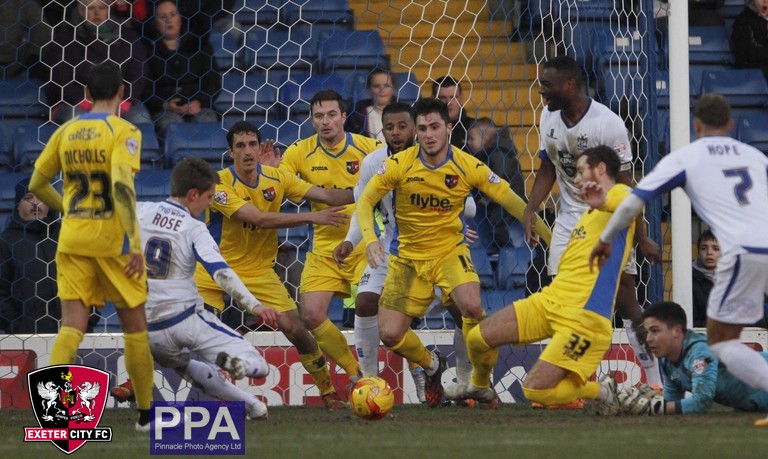 But the home side brought the match level through a former Grecian in Daniel Nardiello who found the net in the 45th minute of the match.

Tickets can be purchased via Bury’s ticketing system by following this link. Tickets are also available on the day at the same prices.

Ticket categories and prices are as follows:

Please Note: Family tickets and disabled tickets can only be purchased from the Ticket Office.
If you are buying your ticket on the day of the game, you can do so directly from the turnstile, which saves time queuing at the Ticket Office.

Blue Light Discounts
Bury Football Club offer a discount for all serving members of the emergency services and HMP. Adult Tickets and Family Tickets can be purchased at £10 rather than the normal price of £20. Discounted tickets can be purchased by visiting the Ticket Office and displaying the relevant identification.

NHS staff can claim their free ticket using their ID card on the day.

Please note that anyone claiming a complimentary or half-price ticket on the day can do so by attending our Ticket Office on the day of the game. These tickets cannot be ordered electronically or at the turnstiles.

Pre-game, the on-site Bury FC Social Club is open to home and away supporters and as well as two bar areas, offering a selection of hot and cold food options.

When scheduling allows, ta live game will also be shown on the projector screen as well as the various TV screens that adorn the walls.

The club offers the usual matchday refreshments within the concourse areas, via stadium catering company, Centreplate.

There are a few pubs around the ground and along Manchester Road in particular. Otherwise, Bury town centre is around a 15-minute walk away where there are plenty of pubs to be found including a Wetherspoons pub called the 'Art Picture House' on Haymarket Street.

Exeter City’s under-18s suffered defeat in a six-goal thriller at Forest Green Rovers last Saturday as they lost 4-2 in Gloucestershire.

The Devon outfit arrived looking to get back to winning ways in the Youth Alliance league following their setback last week.

The visitors began proceedings quite well, enjoying spells of possession and territory as they looked for weaknesses in the Forest Green set up that they could exploit.

However, on 10 minutes, it was the home side who netted the first goal of the game.

Breaking quickly, one long ball dropped in behind the Exeter backline. With the defence failing to deal with the situation, the Rovers attacker latched onto the ball and slotted home to give his side the early lead.

As a result of the goal, Forest Green began to exert more pressure, which they used to their advantage as they netted again five minutes later when goalkeeper Felix Norman miskicked a clearance to their striker to double the home side’s tally.

On 30 minutes it became 3-0 after a period of pressure from Rovers. After Gribble’s men had misjudged the path of the ball, the Forest Green forward was in on goal once again. Norman slipped as he tried to scramble into position, and with the shot-stopper on the floor, the frontman was able to tuck the ball into the back of the net.

Five minutes before the interval, it was 4-0 as the hosts’ attacker beat everyone to meet the ball first and slid the ball home.

When all seemed lost at half-time, knowing that their first-half performance was below par, the response from the Devon side’s players was excellent after the restart.

Tactical tweaks and substitutions were made as the visitors tried giving a good account of themselves in the second half.

Half chances came and went for City, and replacement Theo Simpson looked lively with two early efforts at goal. Charlie Lawrence also saw a long-range effort go wide, as Exeter continued to build up some pressure.

Another substitute, Nelson Iseguan, also proved to be a threat, and on 80 minutes the Grecians reduced the deficit. Dodd was able to link up with his midfield as he charged towards the edge of the 18-yard box. The playmaker curled his effort inside the post to make it 4-1.

However, he and his team weren’t done there, as five minutes from time, Dodd scored his second of the game. With a smart run from deep, a neat cutback located the midfielder, and he placed the ball into the top corner from 20 yards, scoring the game’s sixth goal.

However, the late rally wasn’t enough, as the clock ran out, and the home side ran out 4-2 winners in a game of two halves. Gribble and his players will look to respond when they play Yeovil Town in their next Youth Alliance League fixture.

Exeter City under-18s coach, Chad Gribble said: “As much I loved seeing our fight and character in the second half, we have to be realistic and say that the first half was unacceptable. We fell to pieces after our start, and we are well beyond the mistakes that we made here. It was certainly out of character.

“After the run we have been on over the last two month, perhaps we have taken our foot off the gas, because we weren’t our normal selves. We have got to find a way to regroup, and after that first goal went in, we needed to stay in the game.

“We just needed to manage the game better. The errors we made were at a point in the match when both teams were trying to get a foothold in the game, and maybe we just didn’t have the maturity in that situation to stay in it. It definitely gives us something to learn from and look to improve on.

“The second half, in general, was a real positive. We showed what we were capable of, but I still feel we weren’t at our absolute best. Theo Simpson did well when he came on. He has been off with a lengthy injury so credit has to go to him, whilst Nelson Iseguan impacted well when he was introduced. James Dodd was outstanding. Not often one player gets a hold of the game when the others weren’t at it, but he showed a real mental robustness out there that maybe we haven’t seen before.

“Yeovil Town are our next opponents and we definitely have the ability to bounce back. Young players can make mistakes, but we hold high standards here. We’ve been back on the training pitch, working hard at those areas we needed to improve on, and we’ll be looking for a positive response from the boys on Saturday afternoon.”