Exeter City will be looking to make it two wins from two as they travel to Oldham Athletic in Sky Bet League Two.

The Grecians recently halted a difficult run with a 1-0 win over Crewe Alexandra at St James Park last weekend, but they travel to an in form Oldham side at Boundary Park.

Ahead of the match, manager Matt Taylor said: “It will be a physical, quick, game against a good team who will play the ball forward into our backline and pick up the second ball, and they’ve got some really good attacking threats.

“They’ve scored a lot of goals recently and showed what a good team they are.”

The sides haven’t met since January 2012 in what was a 0-0 draw in League One at Boundary Park. 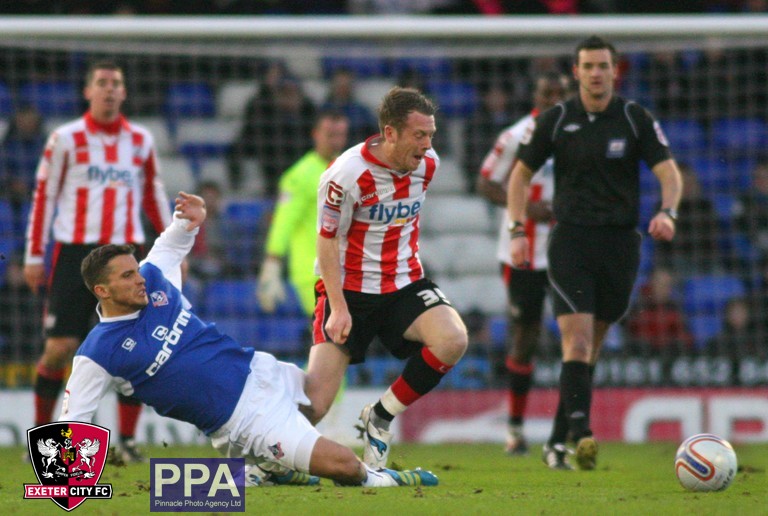 Prior to that the sides met in October 2011 at St James Park when the Grecians won 2-0 thanks to goals from Daniel Nardiello and Guillem Bauza.

Advance tickets are available for City's trip to Boundary Park until 12noon on Friday, December 21 online and 2pm in person.

Ticket prices in the Chadderton Road Stand are as follows:

Matchday Purchase available? YES, available in store or cash on the turnstiles.

From Exeter take the M5 up to the M6 before taking the A556 around Knutsford.  Follow that road until you join the M56 and then the M60. Then take the exit for the A62 which takes you to a roundabout where you need to take the first exit onto the A627. Follow that road until the next roundabout where you need to take the third exit onto A6048. Follow that road round to the left and onto Sheepfoot Lane where the stadium is. There are nearby car parks not far from the stadium. The total distance between St James Park and Boundary Park is 249 miles and will take around four-and-a-half hours to drive.

Getting to Oldham by train, involves first getting to Manchester Piccadilly and then catching a metrolink train out to Boundary Park. The closest metrolink station is Westwood, which is approximately 1.3 miles and a 20-minute walk to the stadium. If you catch the 8.23am train from Exeter St Davids on Saturday, December 22, you can arrive in Westwood for 1.43pm.

According to the footballgroundguide.com, the closest pub is the Clayton Green, which is a Brewers Fayre outlet and can be found 200 yards from the corner of the Main Stand. There is also the Greyhound Inn, which is across Broadway down Holden Fold Lane. This pub welcomes visiting fans, shows Sky and BT Sports, offers real ale, serves freshly cooked food and is family friendly. It is also has a large car park which can accommodate coaches. The pub is around a 10-minute walk away from the visitors’ turnstiles.

A tough first half saw Athletic go ahead through Sam Surridge's header before Stockley levelled things going into the break.

Callum Lang then put the hosts back in front just after half-time, but a powerful left footed finish from Stockley made the score 2-2. The striker then got the winner with a well taken header from Lee Holmes' cross.

Manager Matt Taylor named an unchanged starting 11 to the side that sealed a 1-0 win over Crewe Alexandra last weekend at St James Park.

The opening minutes saw both sides try their luck from distance with Lee Martin looking to continue from where he left off last weekend, but his effort went over, as did Lang’s shot following a City deflection.

The home side then found themselves in front on 12 minutes when Oldham worked it well on the right before Tom Hamer crossed to the far post for Surridge to head home from close range.

Lang almost doubled Athletic’s lead soon after when he cut in from the left before firing a low effort just wide of Christy Pym’s left-hand post.

Lang then had another chance for Oldham on 23 minutes when he arrived at the far post from a deep cross, but his effort flashed across goal and somehow went behind as the Grecians endured a tough opening period.

Pierce Sweeney then had an attempt for City shortly after when a corner fell to him at the back post, and after controlling well, his effort could only find the side netting.

As the half wore on the Grecians seemed to improve in retaining possession, and they created a good chance when Holmes threaded the ball through to Jake Taylor in the Oldham box, but his effort was well saved by Daniel Iverson.

That preceded the Grecians’ leveller when Nicky Law’s corner found Stockley at the near post and his flicked header found the far corner to make the score 1-1 on 38 minutes.

Both sides traded more half chances going into the break, but credit to City who battled back to ensure the sides were level at half-time.

The Grecians got off to the worst possible start as they found themselves behind once again when Lang tricked his way into the City box before firing low beyond Pym.

But City almost hit back through Holmes when Martin did well to drive inside before teeing up his teammate, but his right footed effort crashed against the crossbar.

The Grecians continued to threaten, and they drew level again in excellent fashion. Law did well to drive forward before he played the ball back to Holmes, and his low cross to Stockley saw the striker shoot first time into the top corner to make the score 2-2.

It got even better for City on 70 minutes when they put themselves ahead when more good work from Holmes saw him drive down the left before crossing well for Stockley to head home to complete his hat-trick.

But Oldham pushed to level the score, and they almost did in the 82nd minute when Lang found a yard of space to the right of the City box, but his powerful effort edged just over the City goal.

The Grecians then felt they should’ve had a penalty when substitute Matt Jay played in Chiedozie Ogbene, who did well to cross for Law, but despite getting a tame effort away, the midfielder felt he was pulled back.

City then retained the ball well in the closing stages to hold on to a hard earned three points.