Exeter City’s pre-season campaign continues as they make the trip to Twerton Park to take on Bath on Tuesday in a 7pm kick-off.

The Grecians will look to build on last Thursday's 6-0 win over Truro City as they take on Jerry Gill's Bath City.

Speaking after Thursday's win, Matt Taylor said his side "will only get sharper, stronger and fitter" as pre-season continues at pace. Matt added: "It will be a tough couple of games next week. Bath and Weymouth are good sides so we've got to manage that."

Nicknamed the Romans, Bath City play in the Vanarama National League South, and finished the 2017/18 season in ninth place.

How to find Twerton Park:

The journey to Bath takes around 1hour and 50 minutes and is 86 miles. Click here to find out more. 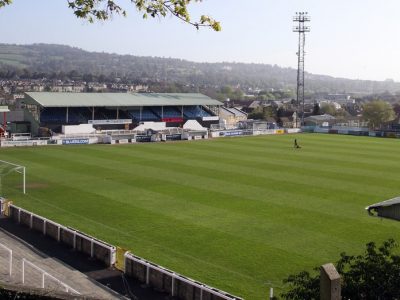 Matt Jay netted the only goal of the game when he scored just two minutes into the second half in a match where Matt Taylor used a number of first team players as they continue their pre-season work.

The aim from the outset for Matt Taylor’s men was to give a number of the starting players 60 minutes of football and the substitutes 30 minutes as the Grecians continued their pre-season work.

It was the home side who would have the first chance at Twerton Park when the game was less than two minutes old as Jack Batten rose well from a corner to head at goal, but for a goal line clearance by Jake Taylor, who hooked the ball away.

Five minutes later Robbie Cundy then had another chance for the home side from a similar position when he rose to head from another corner, but his effort drifted narrowly wide.

City had to wait until the 15th minute to register their first real attempt when Alex Hartridge played a superb cross-field ball into the path of Lee Holmes, and the winger did well to cut inside and shoot but his attempt was blocked, and goalkeeper Ryan Clarke claimed the ball just before Matt Jay could pounce on the rebound.

Jay then did well seconds later when he benefitted from Jayden Stockley’s tenacious running as the City number 11 found his striker partner, and Jay did brilliantly well to shield the ball before getting a shot away which trickled across goal as Bath eventually cleared.

Clear-cut chances then became more scarce in the first half with both sides unable to find that extra bit of quality in the final third to create many shooting opportunities.

On 40 minutes Andy Watkins managed to find himself a yard of space before hitting a low attempt which was kept out and held well by Christy Pym.

It was the Grecians who would have the next chance, though, when Holmes did well down the left-hand side before delivering an exquisite ball to the far post but Stockley was unable to keep his header on target as the sides went in at the break level.

The second half was just two minutes old when the Grecians took the lead as Stockley latched onto an excellent ball through from Craig Woodman. The forward controlled well before knocking the ball into the path of Jay who finished coolly past Clarke with his left foot.

Matt Taylor then made no less than 10 changes from the hour mark on with the manager keen to give as many minutes as possible to his squad.

With the home side too making a lot of changes, the match struggled for rhythm, but they forced Christy Pym into a save when Ollie Mayhew teed up Frankie Artus who stung the palms of the City goalkeeper who kept the ball out well.

Substitute Jack Sparkes then went close for City when he nipped inside before shooting with his left foot, but his effort could only find the side netting.

Harry Kite then sprung from deep with a positive run before setting Sparkes away down the left. The two then worked the ball well before the City number 31 sent an effort towards the far corner but Clarke claimed well.

The Grecians then went close again on 78 minutes when Jonathan Forte darted down the left before sending a deep cross towards Tristan Abrahams who just miscued his volley as the ball edged wide of goal.

Despite controlling much of the second hald the Grecians were unable to double their advantage as they claimed another pre-season victory.