Exeter City round off their pre-season campaign with a trip to the Memorial Stadium to take on League One side Bristol Rovers.

After Friday night’s 2-2 draw with Taunton Town where a host of youngsters featured, the Grecians will look to fine tune their preparations against higher opposition to ensure they are ready for the first match of the 2018/19 season at home to Carlisle United on Saturday, August 4.

Looking ahead to Saturday's game at the Memorial Stadium, Matt Taylor said: "We will have a better idea of where we are at 5pm on Saturday and we will work hard next week and prepare as best we can for Carlisle United

“They (Bristol Rovers) are a league above us, but as I have said all pre-season with have got some good players so I am expecting it to be a good game.”

Rovers compete in Sky Bet League One and play their home matches at the Memorial Stadium. They too will play their final match of pre-season, a schedule which has seen some mixed results as Darrell Clarke prepares his side for the first match of their season away at Peterborough United. Last season Rovers had a mid-table finish as they came 13th, but no doubt they will be keen to improve on that in the coming season and perhaps push for a play-off spot on League One.

City fans are housed in the South Stand (seated) and ticket prices are as follows:

Please enter the ground via turnstiles 24-26

How to find the Memorial Stadium:

The journey to the Memorial Stadium is approximately 82 miles and we recommend that you allow around two hours of travel time, particularly due to holiday traffic on the M5 if driving.

The clubs last met competitively in April 2016 as the Grecians were beaten 3-1 at the Memorial Stadium with Jake Taylor netting for City.

In a game where both sides had spells of pressure, it was City who took the victory with some clinical finishing in front of goal that saw them lead 3-0 at the break before defender Troy Brown added a fourth after the interval.

It was Rovers who started the brighter with Alex Rodman having a couple of efforts at goal and Kyle Bennett firing another shot just wide.

However, Jonathan Forte fired the first warning shot of what was to come on the 20th-minute mark as he latched onto a flick-on from Jayden Stockley and lifted a shot over the advancing Bristol Rovers' keeper Sam Slocombe but the ball bounced wide of the unguarded net.

Rodman then went close again for Bristol as he got a boot to a near-post corner and saw his effort flash across the face of goal and inches wide. So, it was slightly against the run of play in terms of chances that City took the lead in the 28th minute. It came when Pierce Sweeney's low cross evaded Stockley at the near post, which allowed Forte to steal in just behind and side-foot the ball home.

From that moment on, City controlled the first half and they doubled their lead four minutes later when Stockley nodded a corner back across goal for Dean Moxey to fire home with his left foot. 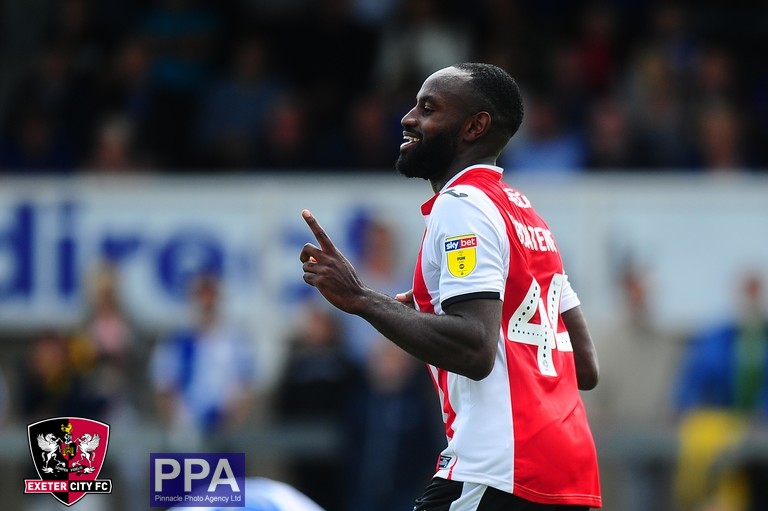 Hiram Boateng, known for his special strikes, then scored his second goal of pre-season as good pressure from Lee Holmes saw the ball break to the edge of the area. That is where Boateng picked up the ball and curled a beautiful shot home from 20 yards.

Rovers started the second half strongly as well, but the City defence stood firm and Christy Pym was not tested. Brown then made it 4-0 on the hour as the home side struggled to clear another corner and the ball found its way to the back post where City's defender side-footed home.

After that, the managers used their substitutes to make a number of changes to both teams which disrupted the flow of the game. Bristol though ended the match the stronger with Ollie Clarke bringing a good save out of Pym before former Grecian Liam Sercombe fired over for the hosts.

Tickets are now on sale for Exeter City's final pre-season friendly against Bristol Rovers at the Memorial Ground on Saturday, July 28 in a 3pm kick-off.

We have a limited number of tickets available to purchase from the club, on the day sales will also be available at the Memorial Stadium.

City fans are housed in the South Stand (seated) and ticket prices are as follows:

Please enter the ground via turnstiles 24-26.

There are no advanced discounts with tickets available on the day at the Memorial Stadium.

Tickets are the same as the prices abbove with the carer going free of charge.

There are 6 visiting wheelchair spaces situated in front of the Away South Stand (please note this is an uncovered area).

Tickets are the same as the prices abbove with the carer going free of charge.

Disabled/carer tickets are reserved in the South Stand front row (Row A).