Exeter City are quickly back on the road as they make the trip to Crawley Town in Sky Bet League Two.

Following a hard-earned point at Grimsby Town on Saturday where the Grecians were unfortunate not to claim the victory, they go in search of more points against a dangerous Crawley side who beat in form Newport County 4-1 in their last match.

Ahead of the encounter, City midfielder Jordan Tillson said: “They’ve had some good results. They beat Newport County 4-1 on Saturday.

“I’m sure that they will be up for it after a good result on Saturday. We can go there, be ourselves, and hopefully we can match them and better them.”

The sides last met towards the end of the 2017/18 campaign as the Grecians chased down the chance of promotion. In an exciting encounter, City were held to a 2-2 draw by Town, then managed by Harry Kewell as Jayden Stockley helped himself to two goals prior to Josh Yorweth making the score 2-2 in the 68th minute.

Tickets are now on sale for City's match at the Broadfield Stadium on Tuesday, October 23, in a 7.45pm kick-off.

You can buy tickets online. You can also call the club during the normal office hours on 01392 411243 or visit the club shop & reception in person between 9am and 5pm Monday to Friday. You will be unable to get your ticket from St James Park after 11am on the day of the game,

The People’s Pension Stand (Seated) prices are as follows:

The KR-L Stand (Standing) prices are as follows:

Grecians Travel departs Unit 1 nightclub at 1pm, with the fare priced at £30. Other pick up points include Honiton Road Park & Ride (by Miller and Carter steakhouse), Cullompton Services (junction 28), Tiverton (junction 27), Taunton (junction 25), any other pick-ups en-route by prior arrangement.

The journey from Exeter St Davids to Crawley station should take between four hours and four and a half hours.

Although this route has fewer changes, it is nearer towards the four and a half hour time whereas the first option is closer to just four hours. Once you come out of the station, turn left onto Station Road and continue until you reach the end of the road.

There is a bar at the back of the Bruce Winfield stand called the Redz Bar. This bar allows in away fans. The closest pub to the stadium is the New Moon which is located on Brighton Road. They serve food also such as burgers and other meals. This is about a five-minute walk away towards the town centre. Another pub that is close by is the Downsman which is found on Whakehurst Drive, just off of Southgate Avenue. The Downsman offers a large menu including a range of Indian dishes as well as outdoor catering.

The total distance between St James Park and Broadfield Stadium is 188 miles and takes around three and a half hours to drive.

Exeter City stretched their unbeaten run to 11 games in all competitions as they put in a high-energy, battling display at Crawley Town to take a point.

City manager Matt Taylor made two changes to the starting XI as leading scorer Jayden Stockley, who suffered through illness in the days leading up to the match, dropped to the bench along with Holmes. That meant Matt Jay and Lee Martin with both recalled to the side.

However, there was a further disruption to City’s plans when Hiram Boateng, originally named in the starting XI, dropped out in the warm up to be replaced by Jordan Tillson.

Not to be deterred though, City started the brighter and pressed well from the front forcing a home side that had scored in every league match at home since Boxing Day last year, into plenty of mistakes.

Jonathan Forte, who produced some good hold up play early on, was first to go close as he pounced on a loose ball and fired over from 20 yards inside the opening minute of the match. Then Jake Taylor sent an inviting ball across the face of goal that nobody could turn home.

However, after that, it was a half of very few chances. Crawley began to dominate possession without troubling Christy Pym, while City were unfortunate with a couple of offside decisions before Jay sent in a low cross that Lee Martin was a yard away from turning home at the near post. 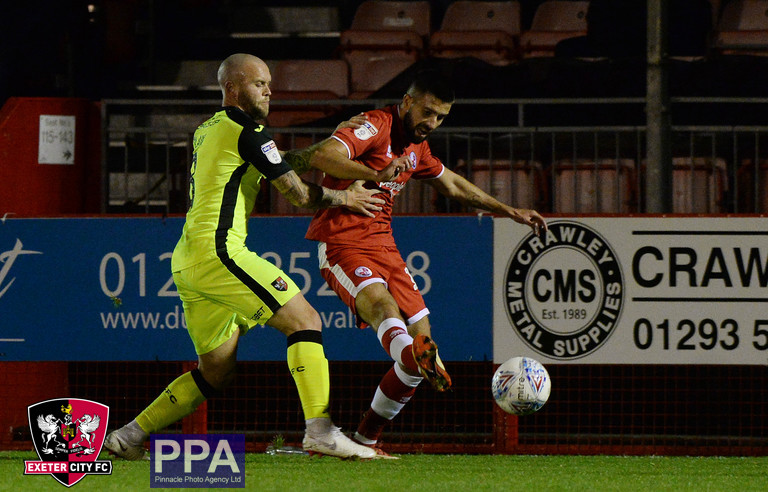 Crawley were first to go close in the second half as they won the ball high up the pitch and Luke Gambin fired an effort on target but it was a comfortable save for Pym.

Matt Taylor then introduced Stockley to proceedings on 56 minutes, for Tillson, and moments later a quick throw-in from Dean Moxey set Forte away down the left and he almost found his strike partner with a low cross but the hosts cleared.

However, just past the hour mark, Crawly took the lead as Ollie Palmer held up a long ball well before feeding a ball into Morais just inside the box and he curled a shot into the far corner.

City almost responded immediately though as Stockley attempted to turn home a low cross from the right, but Glenn Morris produced a good instinctive save, and then Forte hung up a cross to the back post where Stockley, under pressure from a couple defenders, nodded just wide.

At the other end, with 13 minutes to go, Aaron Martin put in a superb sliding block to prevent Palmer from getting on the end of a right-wing cross.

That was a crucial piece of defending, as a minute later City broke from the corner that Aaron Martin had given away and Holmes won a brave header before racing through one-on-one and firing expertly past Morris.

Then as the game approached the 90th minute both sides had great chances to win. First Lee Martin dinked a shot over Morris that was cleared off the line by a covering defender and then Pym had to get up quickly, after making save, to deny Ashley Nathaniel-George’s follow up effort.

However, in the end, the Grecians had to be content with a point that keeps them in the automatic promotion places - a point ahead of fourth-placed Newport County AFC.

Tickets are now on sale for City's match against Crawley Town at the Broadfield Stadium on Tuesday, October 23 in a 7:45pm kick-off.

The People’s Pension Stand (Seated) prices are as follows:

The KR-L Stand (Standing) prices are as follows:

Grecian Travel: The supporters coach to Broadfield Stadium departs at 1pm and is £30 per person. Please click here to find out more.