Exeter City will be looking to make it five wins in a row at St James Park, and extend the unbeaten run to 12 matches as they take on Forest Green Rovers in a 3pm kick-off on Saturday.

Ahead of the match, which sees the Stagecoach Adam Stansfield Stand in use for the first time, City-manager Matt Taylor believes the new facilities are an example of how the club is moving forward.

Matt said: “The stand looks fantastic. It’s been a long time coming, I think everyone is looking forward to getting bums on seats and watching football.

“Facilities like this help the club along and it shows the way we are going. The club is moving forward, the away stand will be open at some stage in the next month or two then all of a sudden, we’ve got a ground we can be proud of.”

Matt also revealed that the Grecians are struggling from a few “little knocks and niggles” ahead of the match with Mark Cooper’s side, as the Grecians take on an opponent who have lost just once in the league this season.

Tickets are on-sale at advance prices until close of play on Friday, October 26. The new Stagecoach Adam Stansfield Stand has sold out, and there are a handful of tickets still available in the IP Office Main Stand.

There is plenty of spaces available in the Thatchers Big Bank, so come get behind the boys in red and white and help continue City's strong start to the season!

ALL supporters to come and tour the brand-new Stagecoach Stand and its facilities straight after the Forest Green Rovers match on Saturday, October 27. 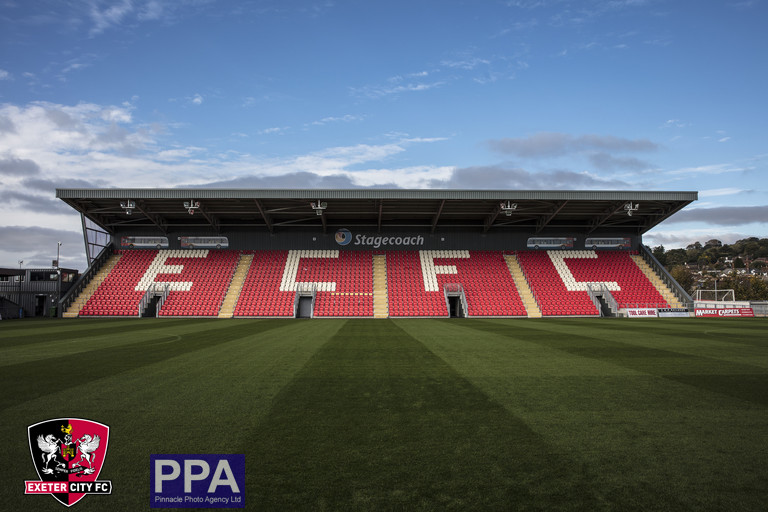 Entrance to the Stagecoach Adam Stansfield stand will be strictly through the Well Street turnstiles only, after the match, meaning supporters will need to leave the ground and re-enter. There will be a controlled entrace to the new stand via match day stewards. 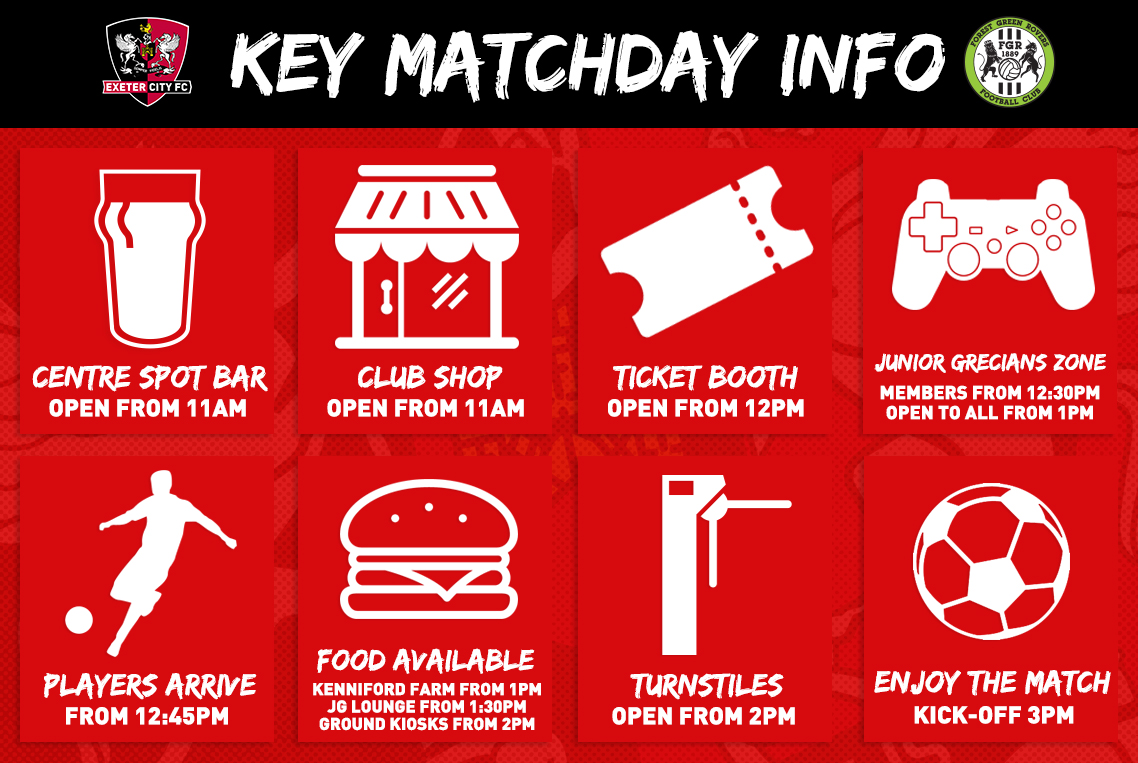 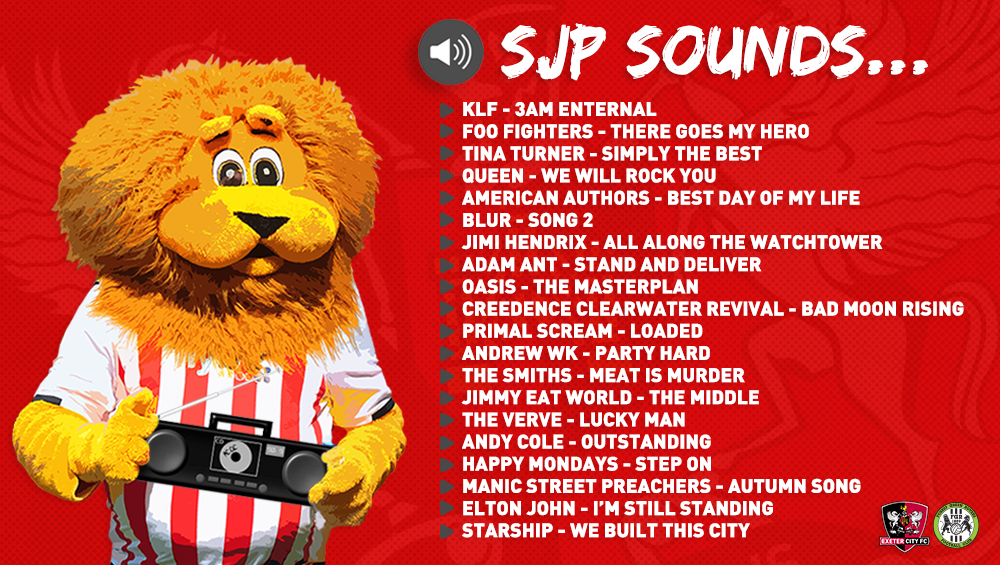 When we last met

Going in goalless at the interval, Exeter came out in the second half with a point to prove as goals from Jayden Stockley and Pierce Sweeney’s penalty ensured the home side all three points.

The match sponsors for Saturday’s game are Bishop Lacey in Chudleigh, assosicate match sponsor is Bidfood and our ball sponsors are the guests of the Exeter City board, those who have gone above and beyond in the construction of the Stagecoach Adam Stansfield Stand.

Ashfords are also sponsoring the latest edition of the match day programme, The Grecian. We are looking forward to welcoming our sponsors to the match and wish them a very pleasant day with us.

In the latest edition of The Grecian, you can read an in-depth feature interview with City midfielder, Jordan Tillson. Inside, he discusses life at City, ground redevelopments and what it’s like working under Matt Taylor.

The programme features a special cover dedicated to the opening of the new Stagecoach Adam Stansfield Stand.

You can also read about City Community Trust’s Santa Run and how you can sign up. Tony Morris returns with his regular feature and you can read all about our opponents.

Pick up a copy for just £3 from around the ground! 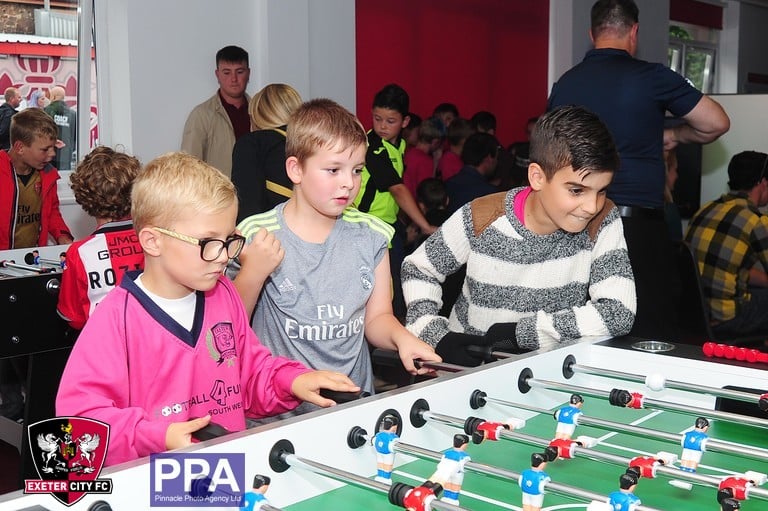 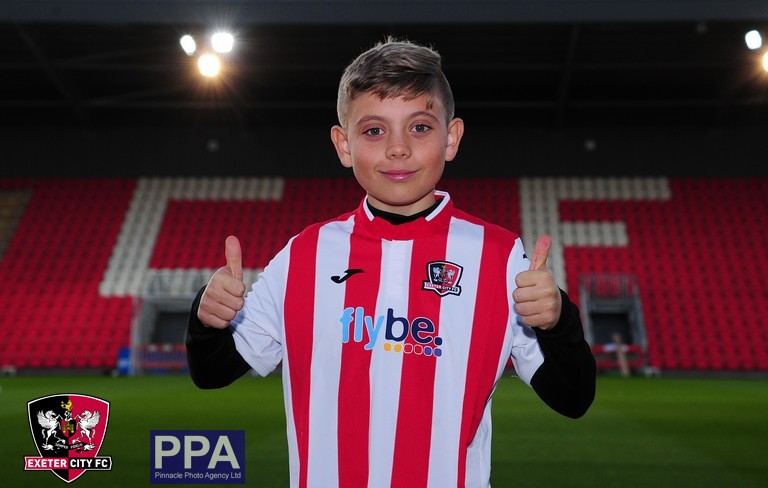 Exeter City's 11 match unbeaten run was brought to an end as they fell to a 2-1 defeat against Forest Green Rovers at St James Park.

Reece Brown found the net early in the second half with a good finish before Liam Shephard made the points safe for the away side. Aaron Martin found the net in bizzarre circumstances when goalkeeper Robert Sanchez miskicked a clearance in the dying moments of the game.

Grecians’ boss Matt Taylor made two changes to the starting eleven from Tuesday’s draw against Crawley, with Jayden Stockley returning to fitness in place of Matt Jay, while the injured Christy Pym dropped out of the matchday squad – James Hamon starting in goal for City. Former City player Lloyd James captained Forest Green on his return to St James Park.

FGR showed a clear commitment to a possession-based system in the opening stages, frequently opting to play short from defensive dead-ball situations, but they were nearly caught out as City won the ball high up the pitch - quick interplay released Jonathan Forte on the inside-right channel, but the City striker was flagged for offside.

The visitors were the more incisive in the first 20 minutes, and had a great chance to take the lead after 16 minutes as a rapid breakaway found  Brown, who cut inside Aaron Martin but delayed his shot just long enough to allow the centre-half to recover, making a last-ditch block.

The Grecians’ first real chance came after 22 minutes, as a pass from Rovers’ Lloyd James hit the heel of another visiting player – Jayden Stockley picked up the loose ball and unleashed a shot from the edge of the box that FGR goalkeeper Sanchez held comfortably.

City were then an inch or two away from opening the scoring – a lovely diagonal over the top from Pierce Sweeney on the right-hand side found Stockley and Nicky Law with an overload, and the former’s header released Law, who dribbled past the goalkeeper but hit the post from an incredibly tight angle.

The game opened up towards the end of the first-half, and Hamon was called into action on 37 minutes, diving low to his right-hand side to get down to Dayle Grubb’s effort. A speculative effort from Jayden Stockley a couple of minutes later then went well wide of the Forest Green goal.

A well-worked move for the visitors would have then given them a great chance to take the lead going into half-time, but a superb recovering slide from Luke Croll took the ball away from Forest Green’s attack at the vital moment.

The visitors came flying out the blocks in the second-half and soon had the lead they’d threatened to take in the first period – Brown curling an effort beyond Hamon and into the very top corner.

The game then settled into a scrappy rhythm that favoured the visitors, and City failed to assert themselves onto the game, and they were punished. With 73 minutes on the clock, Luke Croll misjudged a slide tackle and Forest Green broke at pace, switching the ball from the left to Shephard on the right, and his fiercely hit drive beat Hamon and flew into the bottom left corner.

It took until injury time for City to threaten to halve the deficit; Matt Jay’s spectacular effort flew wide of Sanchez’s goal, but that was about as good as it got for the Grecians after Rovers had doubled their lead.

Somehow, City did get themselves on the scoresheet, as Aaron Martin’s clearance rolled miraculously through the legs of Sanchez in the 95th minute, but it wasn’t enough for Exeter to take anything from the game.

The result places Exeter in third, two points but three places above Forest Green in the League 2 table.

The Stagecoach Adam Stansfield Stand will open for the first time on Saturday, October 27 for City’s match against Forest Green Rovers.

As this is the first match, a gradual opening is being made to ensure everything is working fully.

Tickets are now on sale (advance only) for blocks C and D in the stand. The tickets are on general sale with no priority status required.

Tickets will be available until 5pm on Friday, October 26 and can be purchased in one of three ways. You can book online via Mobile, tablet or desktop by visiting: tickets.ecfc.co.uk from 12pm on Monday, or call: 01392 411 243 or by visiting the club shop/reception at St James Park.

There will be no matchday sales at all for the stand on Saturday, October 27 just advance purchases available. Please note that no collections will be currently available at the new stand as it won’t yet have an operational ticket booth. 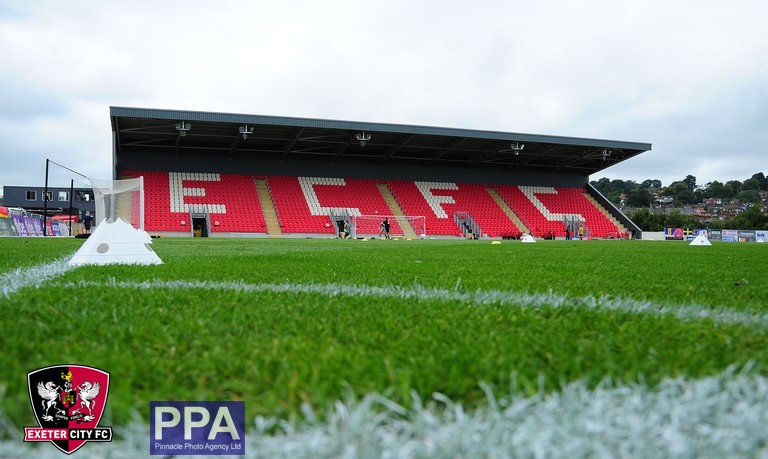 The Forest Green Rovers match is currently the only match that tickets are being released in the Stagecoach Adam Stansfield Stand, ticket details for November matches will follow in due course.

The opening of the new stand means there is now an increase in wheelchair spaces in the ground.