Exeter City are quickly back in action as they make the trip to Birmingham to take on Coventry City in the Carabao Cup.

Having taken six points from their opening two league fixtures, the Grecians enter the first round of the competition looking to progress against their League One opponents.

Ahead of the match, goalkeeper Lewis Ward said: “You always want to prove yourself against higher opposition. We know that we’re more than capable of getting a result there and progressing in the competition so we’ll just have to make sure that we stay focused on what we can do and play our game, then hopefully get a result.”

The Grecians last came up against Coventry City in the League Two play-off final at Wembley in 2018 as City were denied promotion with a 3-1 defeat in the capital.

Jordan Willis put Coventry ahead just a few minutes after half-time before Jordan Shipley’s deflected strike found the net soon after. Jack Grimmer then netted a third before Kyle Edwards scored City’s only goal of the day. 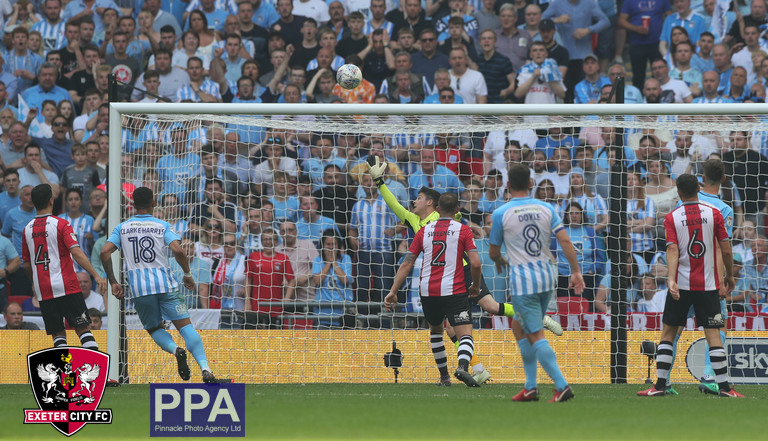 The game, which will be played at Birmingham City's St Andrews Stadium, will kick-off at 7.45pm on Tuesday, August 13.

Tickets are available on the day at the stadium.

Concessions: Include students with IDs, over 60s, under-21s and Armed Forces with ID.

Matchday purchase: Yes, pay on the day is available.

From Exeter take the M5 north all the way up towards Birmingham before joining the M42. Continue along the motorway for a short period before taking the exit for the A435. After going straight over on numerous roundabouts along the A435 you will then join the A540. You will then come to a roundabout near a McDonalds before taking the third exit up towards the ground. On-site parking is sold out for Tuesday’s game. The Main Stand Car Park can be accessed via Garrison Lane. The Kop Stand Car Park is accessed via Coventry Road – there are no road closures for this game. Off-site car parking will be available at Birmingham Wheels Park – B8 1AD. This is a short walk from St Andrew’s. Fans will be able to pay on the gate here for £5 on Tuesday. Off-site car parking is also available at Century Park Industrial Estate - B9 4NZ. This is a couple of minutes’ walk from St Andrew's and fans can pay £5 on entry for the car park.

You can travel via train from Exeter, but routes are limited. You can get the 15:24 from Exeter St. David’s which will take you to Birmingham New Street. You then need to make the journey (around an eight-minute walk) to Birmingham Moor Street before getting a quick train to Bordesley. From Bordesley station, the stadium is a 0.6-mile walk. Unfortunately, you will be unable to travel back via train after the game to arrive in Exeter on the same day therefore you will need to make alternative arrangements to return, or stay overnight and wait until the following day to travel back.

Exeter City exited the Carabao Cup at the first round stage with a 4-1 defeat at St Andrew's against Coventry City.

An early goal from Jordy Hiwula, a header from Matt Godden, and a second from Hiwula took the game away from the Grecians in the first half as the hosts raced into a lead.

City pulled one back through Pierce Sweeney midway through the second period before substitute Amadou Bakayoko headed home late on.

Manager Matt Taylor made eight changes to the side that started the 1-0 win over Stevenage last time out as he looked to ensure minutes were given to squad members who had not featured so far in the opening two fixtures, as Ben Seymour was handed his competitive City debut.

It was a nightmare start for the Grecians when they were dispossessed in the Coventry half and Fankaty Dabo took possession before driving forwards past a number of City players before he squared it to Hiwula, who finished well low past Jonny Maxted.

City almost responded five minutes later when they worked it well out on the right through Archie Collins, and the youngster crossed well for Seymour to glance a header just wide of Ben Wilson’s far post.

The City striker would have another attempt on 10 minutes when Gary Warren’s ball forward was flicked on excellently by Alex Fisher into the young forward’s path, but he dragged his low effort just wide.

Matt Godden would have Coventry’s next attempt at goal just before the 20-minute mark when the home side combined well before the former Stevenage man volleyed at goal, forcing Maxted into a good stop as he collected.

Godden then got himself on the scoresheet when Coventry were awarded a free-kick just outside the Grecians’ box on the left. A wicked delivery was headed on by the Coventry forward and ended up evading Maxted and into the far corner to give the home side a more comfortable score line.

It would get worse for the Grecians just before the half-hour mark when they were caught on the counter-attack before the ball was pulled back and Hiwula picked it up from a tight angle. Despite the on rushing Maxted, the Sky Blues man curled home into the far corner to make it 3-0.

The Grecians were given a golden chance to pull a goal back on 43 minutes when the ball was played back into the box following a corner and headed on by Fisher, but Pierce Sweeney was unable to guide his effort on target as Wilson came out to deny him.

Lee Martin continued to look lively after the break and he almost set up a City reply when he shifted the ball inside from the left towards the far post, but it just evaded the sliding Fisher and Seymour.

It took until the 67th minute for the Grecians to really threaten the Coventry goal in the second half, and they did so through Jack Sparkes. After Matt Jay's shot was charged down the ball fell to the youngster before he shifted onto his right and shot powerfully, but for a smart save from Wilson.

Much unlike the first period, chances became few and far between with the home side comfortable with their advantage as they looked to frustrate Matt Taylor's men.

But City did get their goal in the 80th minute when Sparkes' wonderful free-kick from the right in a crowd of bodies appeared to come off Sweeney and end up in the net as the away side made it 3-1.

As the game headed into its final three minutes of normal time, Ben Chrisene wrote his name into the Exeter City history books as he became the youngest player to turn out for the first team at the age of 15 years, 7 months, and one day.

Still there was time for another goal as substitute Amadou Bakayoko headed in from close range in the dying moments of the match to make the score 4-1.