Exeter City will look to continue their unbeaten start to their League Two season as they make the trip to Oldham Athletic on Tuesday night in a 7.45pm kick-off.

The Grecians have picked up two wins so far and go into the match at Boundary Park following a 1-1 draw with Swindon Town.

Manager Matt Taylor believes he could make changes to the side that started the match with Swindon with players waiting to come in and impress.

He explained: “I’ve got to assess it on Monday and Tuesday with Tom’s (Parkes) suspension and Randell (Williams) looks like he may be a bit of a doubt.

“We’ll see, it’s the reason why we’ve got a squad. MJ (Matt Jay) was ready when he came on, we’ve got Jack Sparkes waiting in the wings, and Ben Seymour. We’ve got lots of personnel waiting and ready to go.”

The sides last met towards the end of the 2018/19 season at St James Park as both teams looked towards a play-off push. 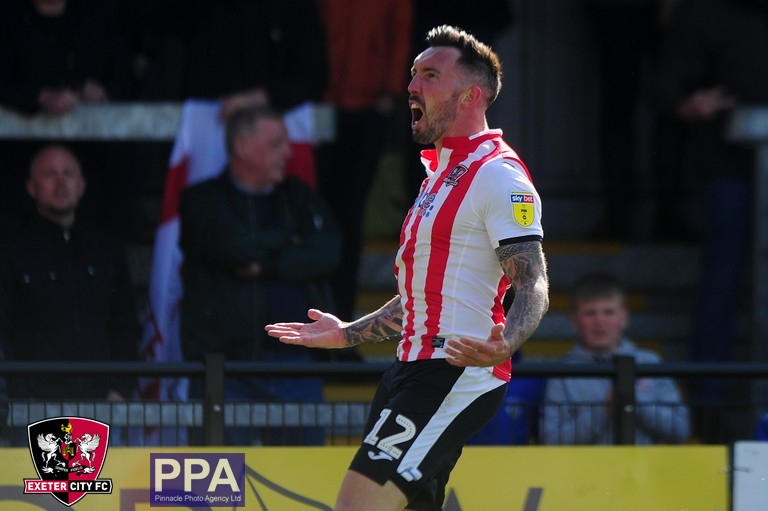 In a narrow affair, it was City who picked up all three points through Ryan Bowman. A quick free-kick saw Lee Martin beat his man before crossing for Randell Williams to have his header saved, before Bowman headed home the rebound from close range.

Unable to make it to Boundary Park? The match is streaming live in the UK and overseas, and a UK match pass costs just £10. Click here to find out more. 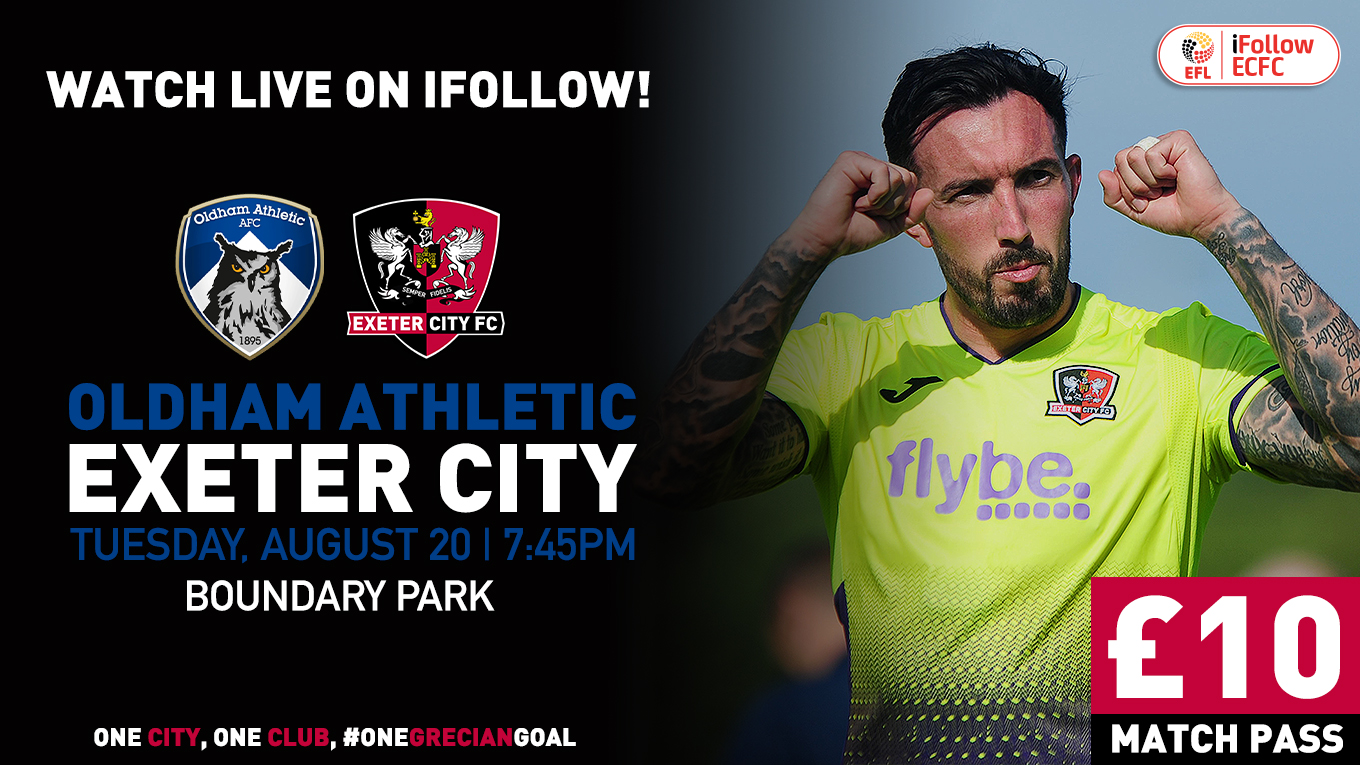 Grecian Travel: The supporters' coach will depart at 12.30pm on the day of the game for a fee of £38. To purchase travel tickets, click here.

Getting to Oldham by train is not easy, but the 12.50pm from Exeter St Davids gets you into Manchester Picadilly at 5pm, with a change at Birmingham New Street. From there you have to get a short tram to St Peter’s Square before changing to get the pink line tram out to Westwood which is the closest Metrolink stop to Boundary Park. However, it is still a 20-minute walk from here to the stadium.

According to the footballgroundguide.com, the closest pub is the Clayton Green, which is a Brewers Fayre outlet and can be found 200-yards from the corner of the main stand. There is also the Greyhound Inn, which is across Broadway down Holden Fold Lane. This pub welcomes visiting fans, shows Sky and BT Sports, offers real ale, serves freshly cooked food and is family friendly. It is also has a large car park which can accommodate coaches. The pub is around a 10-minute walk away from the visitors’ turnstiles.

Exeter City continued their unbeaten start to the league campaign as they picked up a 0-0 draw on the road against Oldham Athletic.

The Grecians had the better of the chances throughout the match and often came close to finding an all-important winner but were unable to find a way past a determined Oldham outfit.

Jake Taylor thought he'd won it in the dying seconds of the match but for his goal to be ruled out for offside.

Manager Matt Taylor made four changes to the side that started the 1-1 draw with Swindon Town last weekend as there were starting spots for Matt Jay, Lee Martin, Jack Sparkes and Jayden Richardson, who made his City debut after agreeing a temporary deal to sign for the club last week.

The first real chance of the game fell for City on 10 minutes when Richardson did well down the right following a City throw, and the youngster crossed low for Lee Martin, whose goal bound effort took a nick off an Oldham defender to nestle the wrong side of the post.

That preceded another good opening for the Grecians when Ryan Bowman was found inside the Athletic box before chesting the ball and volleying goalwards, but his attempt went just over as City looked to gain and early foothold in the game.

Mohammad Sylla would have Oldham’s first real attempt on target just before the half hour mark, with the home side forced to try their luck from range on a couple of occasions which failed to trouble Lewis Ward beforehand.

The central defender turned well after recycling an Oldham corner, but his effort lacked conviction as the City keeper collected.

Good chances then fell in quick succession for both sides when Bowman turned well just inside the Oldham box before curling a left footed effort goalwards, but Gary Woods saved and held well.

The home side then went up the other end through Gevaro Nepomuceno down the right, and after bringing the ball down well he fired an effort at goal, but Ward saved well to clear for the Grecians.

Oldham had an excellent chance to go ahead in the dying moments of the first period when Ashley Smith-Brown crossed well from the left to the far post, and despite the ball bouncing in the City box, Johan Branger-Engone’s header edged just over.

The Grecians had the first opportunity of the second period when they worked it excellently from back to front with Aaron Martin finding Lee Martin centrally. The ball then found its way out wide to Richardson, who then fed the ball back to Lee Martin, and despite turning well, his left footed effort was dragged just wide of goal.

City had a glorious chance to go ahead just after the hour mark when they broke well and Sparkes crossed wonderfully to the far post to find Jay in the six-yard box, but he was unable to keep his header on target.

Matt Taylor’s men continued to dominate in the second period and Nicky Law was next to have an attempt when they broke forward and the ball fell to the City number 8 on the edge of the Athletic box. And despite being in space, the midfielder’s low effort edged narrowly wide of goal.

Against the run of play Oldham then had a rare chance when Nepomuceno was played in down the right-hand side in between the City defence, but credit to the impressive Dean Moxey who slid in well to send the Oldham man inside, and Ward was out quickly to claim the ball.

The Grecians then had Moxey to thank when the ball fell to substitute Zak Mills following an Oldham corner, and despite the Athletic number two firing viciously at goal, Moxey was on hand to clear off the line with a brave header.

Oldham keeper Gary Woods was then called into action when Pierce Sweeney found Jake Taylor superbly down the right, and despite shooting on target the Oldham keeper was out quick to block the ball behind for a corner.

City thought they'd won it in the dying seconds when Nicky Ajose's cross found Taylor at the far post, and despite heading in and running off to celebrate, the flag was up for offside as the full-time whistle followed soon after.

Tickets for City's match against Oldham Athletic at Boundary Park on Tuesday, August 20 (7:45pm) are now on sale.

Grecian Travel: The supporters' coach will depart at 12.30pm on the day of the game for a fee of £38. To purchase travel tickets click here.