Exeter City are in Leasing.com Trophy second round action on Wednesday night against Oxford United in a 7pm kick-off.

The Grecians have been in fine form in the Leasing.com Trophy, unbeaten and winning their Group after picking up wins against Cheltenham Town, Newport County and West Ham United.

City made the last-32 last season before falling to Peterborough United at home and will be looking to better that this season.

Ahead of the match, City wing-back Jack Sparkes said: "We are really looking forward to it. It's another competition we are involved in and it means more game time for players and another chance for players to prove why they should be playing more regularly."

City last met Oxford United in the same tourament back in 2016. The Grecian youngsters performed well in their opening group game, but ended up falling to a 4-2 defeat to Oxford United at the Kassam stadium.

Goals from Tyler Roberts, Chris Maguire, Ryan Taylor and Alex MacDonald made the difference against the injury-hit Grecians who at times looked dangerous against the League One outfit.

Tickets can be purchased in advance by clicking here.

There will be a reduced size of The Grecian for the match costing just £1.50 where we profile this evening's opponents, we also hear from Grecians boss Matt Taylor.

The match can be streamed through the club’s Ifollow service. Click here to find out more. 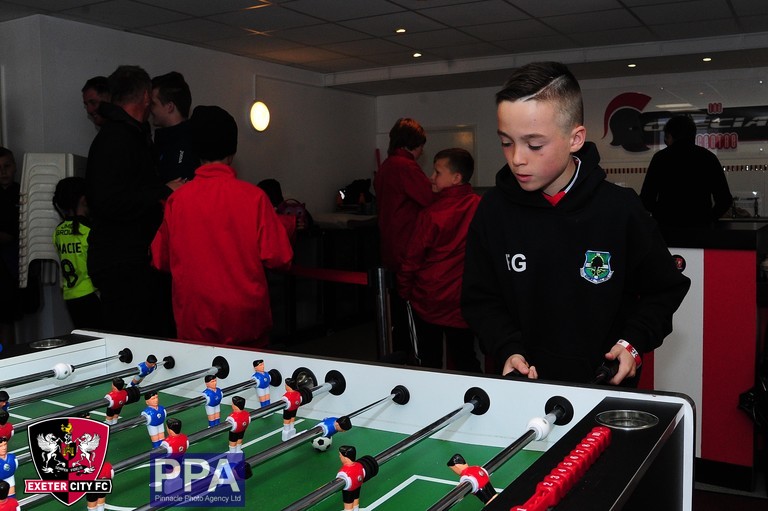 The club shop will be open until 7pm on Wednesday, giving you the opportunity to make some purchases ahead of the match including the popular new third and away kits!

Three consecutive penalty saves from Dino Visser in the shoot-out saw Exeter City emerge winners against Oxford United in the second round of the Leasing.com Trophy on Wednesday night. The game had finished 0-0 after 90 minutes.

City boss Matt Taylor made an array of changes from Sunday’s 2-2 draw against Hartlepool for the visit of Oxford United in the Leasing.com Trophy. The visitors also made several changes from their last league outing against Walsall, in which they won 1-0.

The visitors started brightly, and Jamie Mackie was the first Oxford player to threaten – the former Grecian shooting wide from a tight angle with three minutes on the clock, having gotten the better of Tom Parkes. Dan Agyei then burst down the left-wing, though his cross was claimed by Dino Visser.

The Grecians responded with a fantastic chance of their own, as Matt Jay beat his man and threaded a great pass into Alex Fisher, and the striker put in a superb cross that Lee Martin was only inches away from meeting with his head.

Visser was then called into action again with 11 minutes on the clock; Mackie latched onto a through ball and, despite being forced wide, unleashed a fierce shot from inside the box that Visser somehow got a hand to, and diverted onto the crossbar. City continued to find joy in the attacking third, however, and Joel Randall’s cross searching for Fisher was cleared just as the City man looked to be directing it goalwards.

Quite how City didn’t score two minutes later appeared a mystery – Jay worked his way through the Oxford defence before producing a superb save from Jack Stevens, and the loose ball fell to Randall whose effort was cleared off the line.

Visser then produced another moment of quality to get a strong hand to Agyei’s fierce shot from close range; the South African dived low to his right-hand side to keep the visitors at bay with a superb save.

City surged back into the game at the end of the first period, as Matt Jay forced another save out of Stevens after some good interplay with Harry Kite, before Jayden Richardson fired over at the end of the same move.

Excellent work from Lee Martin produced the first opportunity of note in the second period; he drew his marker away from the penalty area before feeding Jay, whose effort in space was mishit and saved easily by Stevens.

The visitors nearly grabbed a spectacular opener as Mark Sykes plucked the ball out of the air and fired a half-volley towards Visser’s goal, but thankfully for the Grecians the effort was wide of our goalkeeper’s left-hand post. Visser had to be on his toes again moments later to palm away a dangerous cross, and did so bravely – a collision with Agyei won a free-kick for City and the danger was cleared.

It was a second period that was contested less in each side’s attacking third and more in the midfield, with neither side able to find a winner inside the 90 minutes.

Into the penalty shoot-out, and Dino Visser – having not put a foot wrong in the 90 minutes – saved all three penalties sent his way by the League One side, stopping Forde, Hall and Sykes from 12 yards, while the Grecians scored all three through Jay, Sweeney and Seymour to advance to the next stage.