Exeter City are just one match away from a trip to Wembley Stadium as they travel to face Portsmouth at Fratton Park in Leasing.com Trophy semi-final action on Tuesday, February 18.

Ahead of the match, Exeter City's Matt Jay said the Grecians will take confidence from the fact that they have already beaten two Sky Bet League One sides out of the competition already and motivation from being one game away from a final at Wembley.

“Getting to Wembley is not something you think about when you start of this competition, but now we have got through the rounds and we have done quite well, it is definitely something that is going to motivate us, because we are only one game away," said Matt. “We have beaten some good sides along the way, some teams from higher divisions and some teams who have been doing well in their league and also the young Premier League sides. So, we will go into tomorrow’s game with a lot of confidence that we can cause a bit of an upset.”

WATCH AT THE CENTRE SPOT

Exeter City's Leasing.com Trophy semi-final against Portsmouth at Fratton Park on Tuesday, February 18 will be shown in the Centre Spot Bar at St James Park.

The match, which kicks-off at 7.45pm is live on Sky Sports and will be screened along with Liverpool's round of 16 Champions League tie against Athletico Madrid.

Don't forget that Exeter City Supporters' Trust members can get 20% off drinks at the bar. 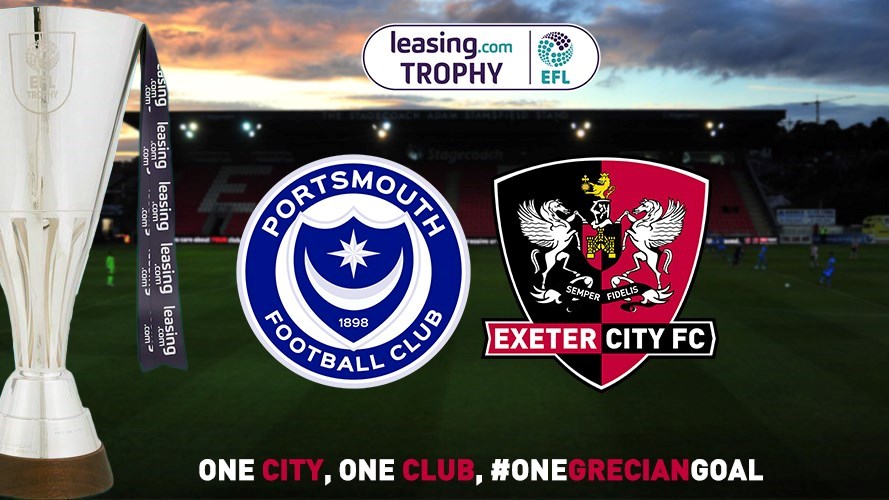 David Wheeler's second half goal, and his fifth in five games was enough to give City the three points and extend the unbeaten run to ten.

Portsmouth have played at Fratton Park since they were formed in 1898, and it remains one of the most characterful stadiums in the country.

The main stand was designed by well known football architect Archibald Leitchm and was described as an "Ornate Pavillion complete with Clocktower" which is similar to Fulham's Craven Cottage.

The Fratton End was opened in 1997 and is the most modern of the stands in the stadium, as well as the tallest. The seats have the outline of Jimmy Dickinson, the player with most appearances for the club. The North and South Stands are both two tiered, while the Milton End, which will host our fans next week, was once the only roofless stand in the Premier League.

For the fastest route to Fratton Park, follow the A30, A35, A31 and M27 to Mile End Road in Portsmouth. From here take the A2030 to Frogmore Road in Southsea. The car park at the stadium is reserved for home fans, which means visiting supporters are left with the choice of either street parking which is generally available due to a lack of parking restrictions near the stadium, or on of the matchday car parks which can be found at the Miltoncross academy or on Velder Avenue.

Trains from Exeter St David’s take around three to three and a half hours, with a change of service at either Salisbury or Westbury. However, while there are plenty of outbound services on the day, the is not a suitable train back from Portsmouth Harbour as the last leaves at 8.23pm.

Popular with away fans is the Good Companion pub, which is on the main A2030 about a five minute walk away from the ground. It is a large pub serving real ales and had a good mix of home and away support. Other nearby pubs include the Brewers Arms, and the Milton Arms, both found on Milton Road.

Click here to find out all you need to know about visiting Fratton Park.

The total distance between St James Park and Fratton Park is 130 miles and it takes around three hours and five minutes to drive. 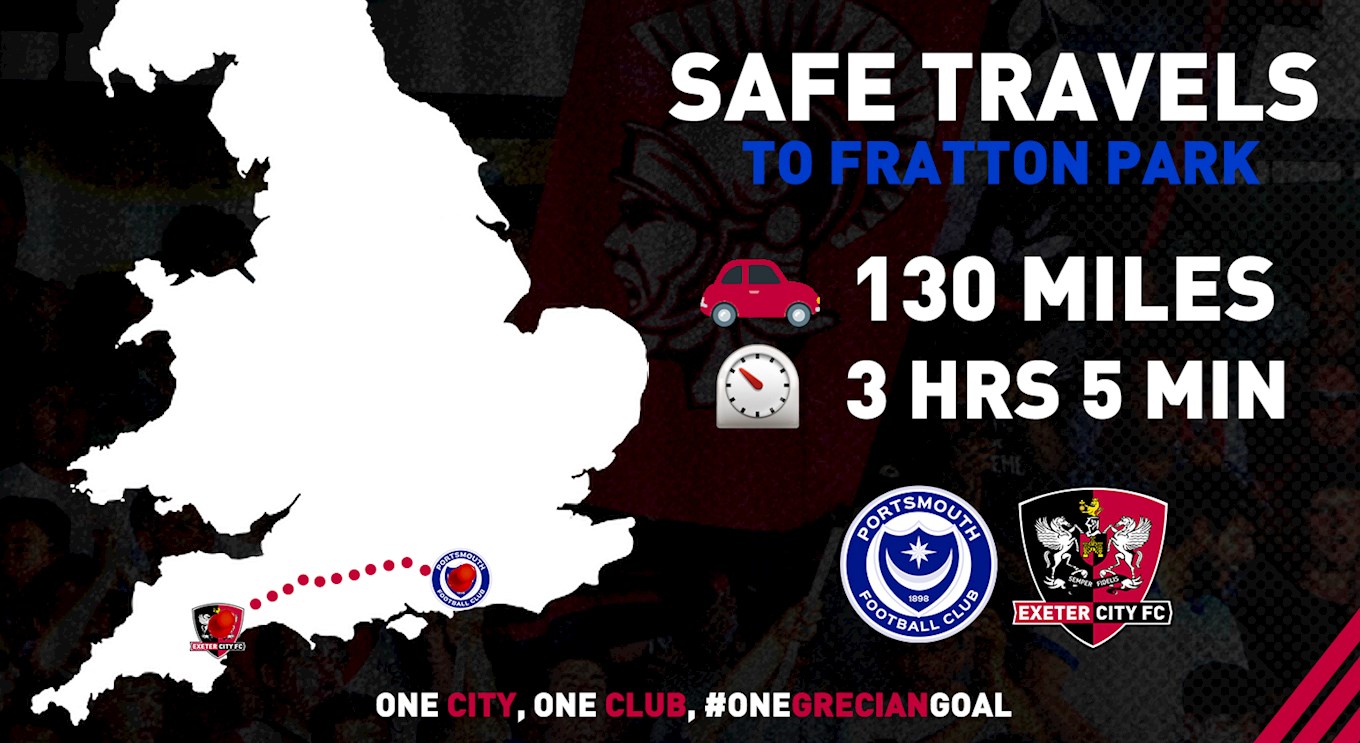 Exeter City's chances of going to Wembley Stadium in the Leasing.com Trophy final were cruelly ended by two injury-time goals from Portsmouth at Fratton Park.

The Grecians who had led twice late on through goals from Jake Taylor and a deflected cross from Joel Randall, were undone when Cameron McGeehan and John Marquis scored in injury-time to give Portsmouth what, looked a time, an unlikely victory.

Manager Matt Taylor named a side with a mixture of youth an experience as Tom Parkes and Gary Warren lined-up alongside Jordan Dyer in defence, while Harry Kite got a midfield spot with Nicky Law and Jake Taylor.

However, it was the Grecians who impressed in the first half despite a Portsmouth side, who have not been beaten at home all season, naming a strong starting XI.

Randall and Lee Martin both got good crosses into the Portsmouth box inside the opening 10 minutes before Ronan Curtis then skied an effort of from inside the area as the hosts countered.

Portsmouth when then forced into an early change as Ellis Harrison went off injured to be replaced by Marquis.

Jayden Richardson got down the right and looked to cut the ball onto his right foot after 33 minutes but his shot on the edge of the six-yard box was blocked. Joel Randall then had another effort from 20 yards blocked by a Portsmouth defender before Lee Martin volleyed wide.

However, despite, City and Portsmouth having a number of breaks into the opposition areas neither keeper had been tested as the sides went into the break all square in a first half where both sides cancelled each other out.

Randall then had the first break into the Portsmouth box in the second half, following a strong run forward from Jake Taylor, but his cross into the box was claimed by Alex Bass.

However, after 52 minutes came the first big chance of the match as a cross to the back post was nodded towards the goal line amongst a melee of bodies and Tom Parkes had to be in the right place to boot the effort of his goalline.

Lewis Ward then produced the save of the match as he dived to his left to turn a powerful shot from Oli Hawkins to safety midway through the second half.

However, it was in the final 15 minutes that the match really came to life as Randell Williams, on a substitute, ran to the edge of the box and hit an effort that deflected wide for a corner which Jake Taylor volleyed home after Portsmouth failed to clear it well enough.

However, with eight minutes to go Portsmouth drew level as Parkes blocked Ronan Curtis' effort on the line only for Marcus Harness to follow up and fire in the rebound.

There was further twists to come as Randall, who has netted twice in this competition before, played in a low cross for Ben Seymour that was turned into his own net by a Portsmouth defender with two minutes to go.

That looked to have won the match for City, but McGeehan had a deflected shot, that looped home in the 91st minute, and then Marquis nodded in with virtually the last attack of the match to grab the winner and break City's hearts.