The Grecians come into the match still in first position after their midweek win over Port Vale last time out, but they will be taking on a Newport side who have lost just once in the league this season.

Ahead of the match, manager Matt Taylor said: “You always need to be at your best, regardless of who you're playing. Whenever you go to Newport you know it's going to be a serious test in terms of your durability and your physicality."

The Grecians come into the match first in Sky Bet League Two having picked up 21 points from their first nine matches of the season. As for Newport, they sit sixth in the table and come into the game following a 1-1 draw with Macclesfield Town last time out. 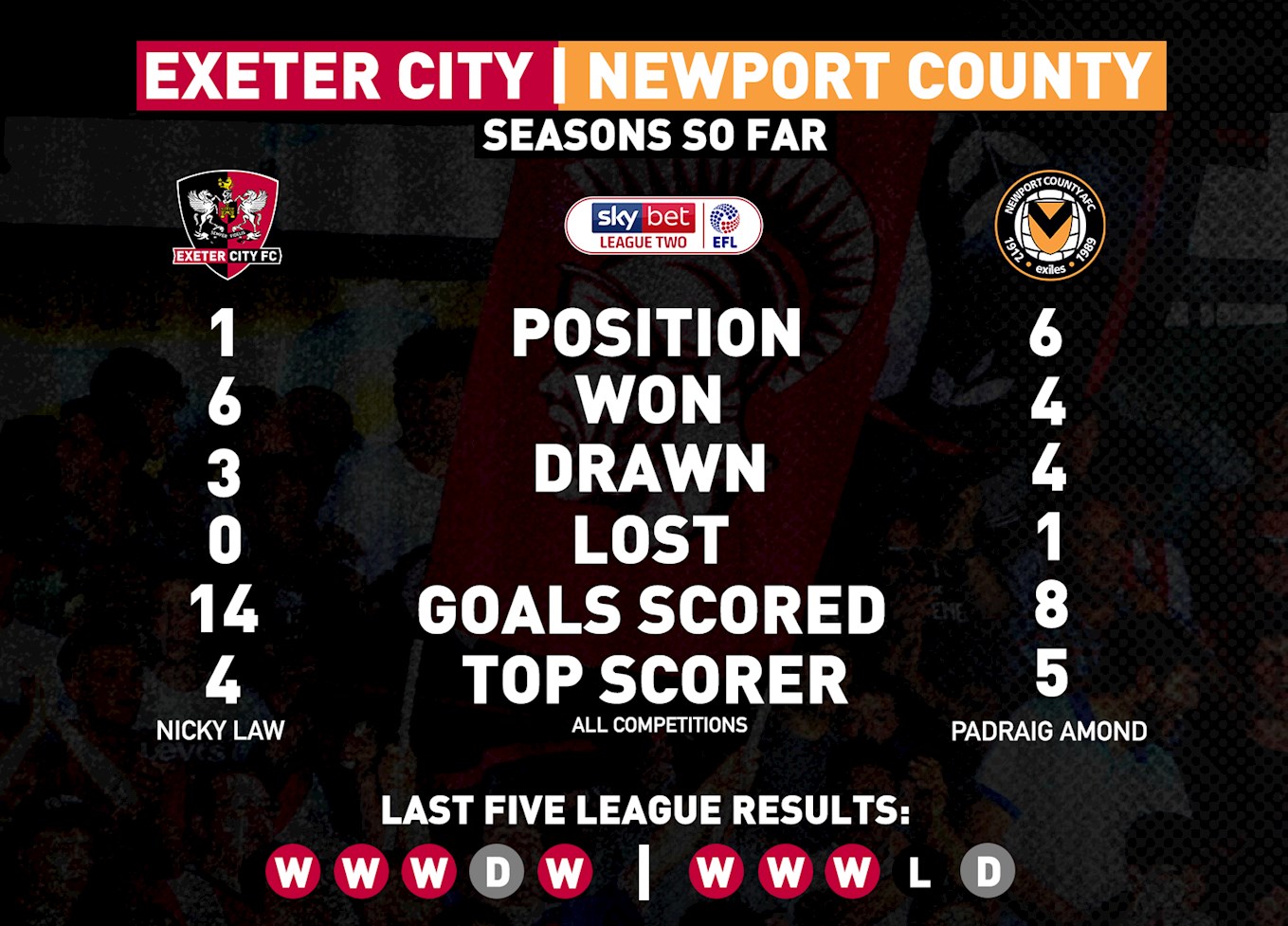 Ahead of the match, Newport manager Michael Flynn said: “We’ll give it our best shot now [on Saturday] and I’d love a fully fit squad for that, but it’s not to be at the minute.

“We will be fully recharged ready to go for Saturday with that raucous, loud crowd that we have at Rodney Parade.”

The sides last met back in January as the Grecians fell to a 1-0 defeat at Rodney Parade. A tightly fought encounter saw Jamille Matt prove the difference when he scored in the 71st minute. Ryan Bowman then fired an effort off the crossbar from distance as City were unable to draw level in south Wales.

Our advanced allocation of tickets for City's trip to Rodney Parade to face Newport County on Saturday, September 21 have now sold out.

Tickets can now ONLY be purchased from the away end on the day and are cash only.

PLEASE NOTE: Tickets are now only available in the South Stand, which is uncovered seating.

You can take the 10:24 train from Exeter St David’s which will get you to Newport for 12:24 having made one change at Bristol Temple Meads. You can then get the 17:44 train back from Newport which will have you back in Exeter at 19:44, again having changed at Bristol. The station is less than a mile walk from the ground, just over the river.

Despite going ahead after 15 minutes through Lee Martin, City were pegged back by a Tristan Abrahams penalty in the second period and battled to take a point away from south Wales.

The Grecians made two changes to the side that started the 2-0 win over Port Vale in midweek as Lee Martin and Randell Williams came into the side.

It was City who started brightly in the opening seven minutes, first when Pierce Sweeney found Lee Martin, whose dangerous cross had to be pushed away by Tom King, before Nicky Law cut to the by-line before seeing his effort turned behind for a corner.

Sweeney was in the thick of the action again on 11 minutes when he rose excellently at the far post to meet Williams’ corner, and the Irishman’s effort forced a smart save out of King in the County goal.

City made their early dominance pay when they took the lead on 15 minutes. After a corner had to be retaken, Williams delivered a superb cross which evaded everyone in the box, but for Martin, who tapped home from close range to make it 1-0.

The home side then created an opportunity for themselves when a ball down the right managed to evade Tom Parkes, and Jamille Matt poked an effort at goal, but for Lewis Ward who saved well.

Newport began to get more of a foothold in the game as the half wore one, and Ward was once again called upon when Matt knocked the ball down well for Joss Labadie to fire low, but for an excellent reaction save from the City keeper as the Grecians took a narrow advantage into the break.

It was the home side that would have the first chance of the second period when they counter-attacked and substitute, and former Grecian, Tristan Abrahams managed to get in behind before crossing for Matt to fire first time just wide of goal.

More pressure would follow for the home side as the Grecians were forced to defend as Kyle Howkins saw his effort blocked by Parkes before Labadie’s follow-up effort sailed over Ward’s goal.

Newport would then be awarded a penalty when Parkes unfortunately slipped, and whilst attempting to clear whilst on the floor, was penalised for a foul on Josh Sheehan. It was to be Abrahams who would step up to take the penalty and he converted calmly past Ward.

A chance then fell for Dean Moxey on 78 minutes when Jake Taylor managed to keep a City corner alive, and it fell to the defender who was unable to keep his effort on target.

Jayden Richardson's tenacious running then almost earned City an opportunity after he managed to dispossess King in the County goal in stoppage time, but for the Newport defence just managed to clear in the nick of time to prevent the youngster from getting a shot away.