The Grecians have been free-scoring of late, netting 18 goals in the last four league matches, eleven of which came in the last two at St James Park and will be looking to pick up another valuable three points and push up towards the automatic promotion places.

Ahead of the match, City midfielder Matt Jay, who made his 100th professional start on Saturday said that the team are looking to kick on over the busy festive period.

"We are getting stronger and we want to attack this Christmas period." said Matt. "It is going to be interesting, they aren't in the best of form but that goes out of the window around this time with the games coming thick and fast.

"They will have a long trip down and we will try and make it as difficult as we can for them and get the result we want."

You can watch Matt's full interview 👇

We are delighted that supporters are being welcomed back to stadia across the country and up to 1,800 of you will be in attendance on Tuesday. if you're one of the lucky few we have some important information you need to know, especially if this is your first visit to the Park since the return of supporters. 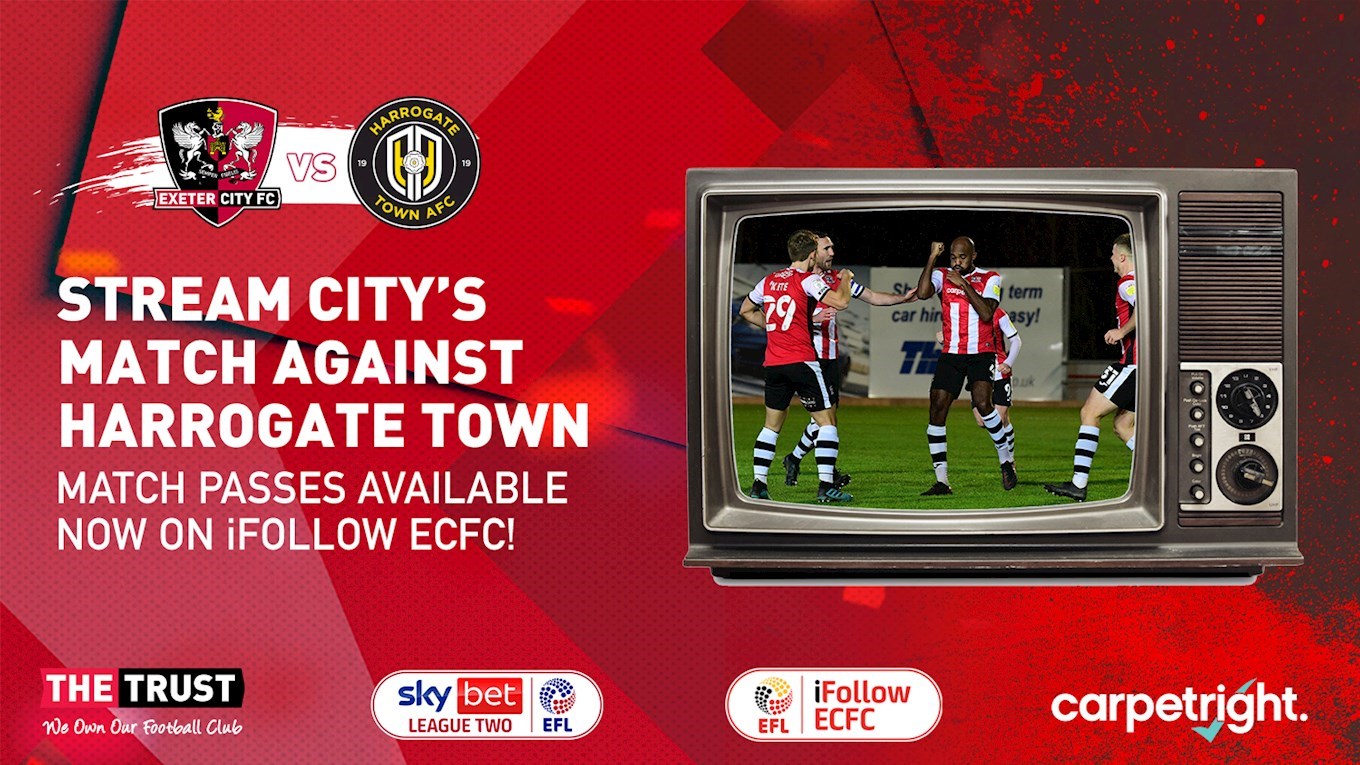 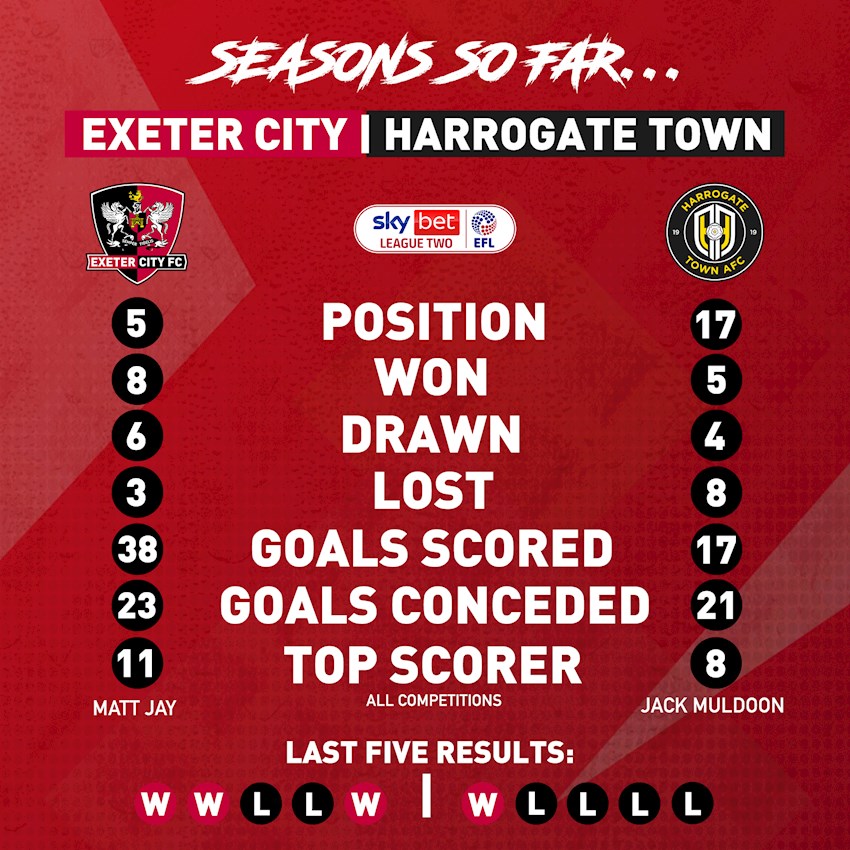 Aaron Wildig's second half header was enough for Morecambe as they held out for a 1-0 win on Saturday.

Exeter City suffered defeat at St James Park as Harrogate Town head back to Yorkshire with all three points following a 2-1 victory.

Goals from Brendan Kiernan and Jack Muldoon either side of the break succumbed City to their fourth defeat of the League Two season.

Jake Taylor scored The Grecians’ only goal seconds after half time as City were much the better team throughout the ninety minutes, but Harrogate’s two only real shots of the game were enough for the visitors.

Exeter thought they should have had a stonewall penalty in the second half, but the expectant shouts for handball were ignored by the referee.

Matt Jay and Joel Randall had good chances to get on the scoresheet, but it was not to be for Matt Taylor’s men.

The boss made one switch from the 5-0 thrashing of Tranmere on Saturday. Alex Hartridge started ahead of Tom Parkes and Nicky Law returned to the bench.

Taylor was fouled midway in the Harrogate half for the first free kick of the evening. Pierce Sweeney got his freshly trimmed head to the ball but could not guide it goalward.

The set piece was nearly the undoing for Exeter. George Thomson’s flat corner was spilled by Jonny Maxted and after a mad pinball game in the City box, an effort from Josh Falkingham was fired over.

Randall had The Grecians’ first chance. The winger burst through on goal, but his left-footed effort was fired straight at James Belshaw.

Harrogate remained rigid and disciplined in midfield and went ahead just after the half hour. Brendan Kiernan capitalised on soft City defending to put Harrogate a goal to the good.

City were almost level after Jack Sparkes’ inch perfect cross was met well by Matt Jay with a superb header but Belshaw somehow tipped the ball wide, and Exeter were one-nil down at the break.

Not ten seconds after the second half kick-off City were level.

A long ball forward was poorly dealt with by the two Harrogate defenders. Jay hussled and bussled and presented the ball to Taylor who prodded home from six yards out. It was the captains sixth goal of the season and St James Park found its voice again.

Tails up, Randell Williams drifted inside but his one-two with Ryan Bowman did not quite have the right execution and Belshaw claimed.

On 55 minutes Jack Sparkes fired a free kick on target from thirty yards. The Town keeper parried the ball up into the night sky and the ball crashed off the arm of Ryan Fallowfield, but referee Lee Swabey rejected the cries around EX4.

Soon after an exchange of blows as Jay volleyed into the keeper’s hands, and Aaron Martin headed over for the visitors.

With twenty minutes left Matt Taylor gambled with a double change for the hosts. Randall and Taylor were rested for Nicky Law and Nigel Atangana.

But Harrogate retook the lead with 15 minutes left. A flick on from Martin was well brought down by Muldoon and the Sulphurites’ top scorer curled the ball into the far corner.

Maxted was forced into a good save with his legs when Kiernan broke through again. On 85 minutes Harrogate should have had a third when Thomson’s in-swinging corner was headed past the post 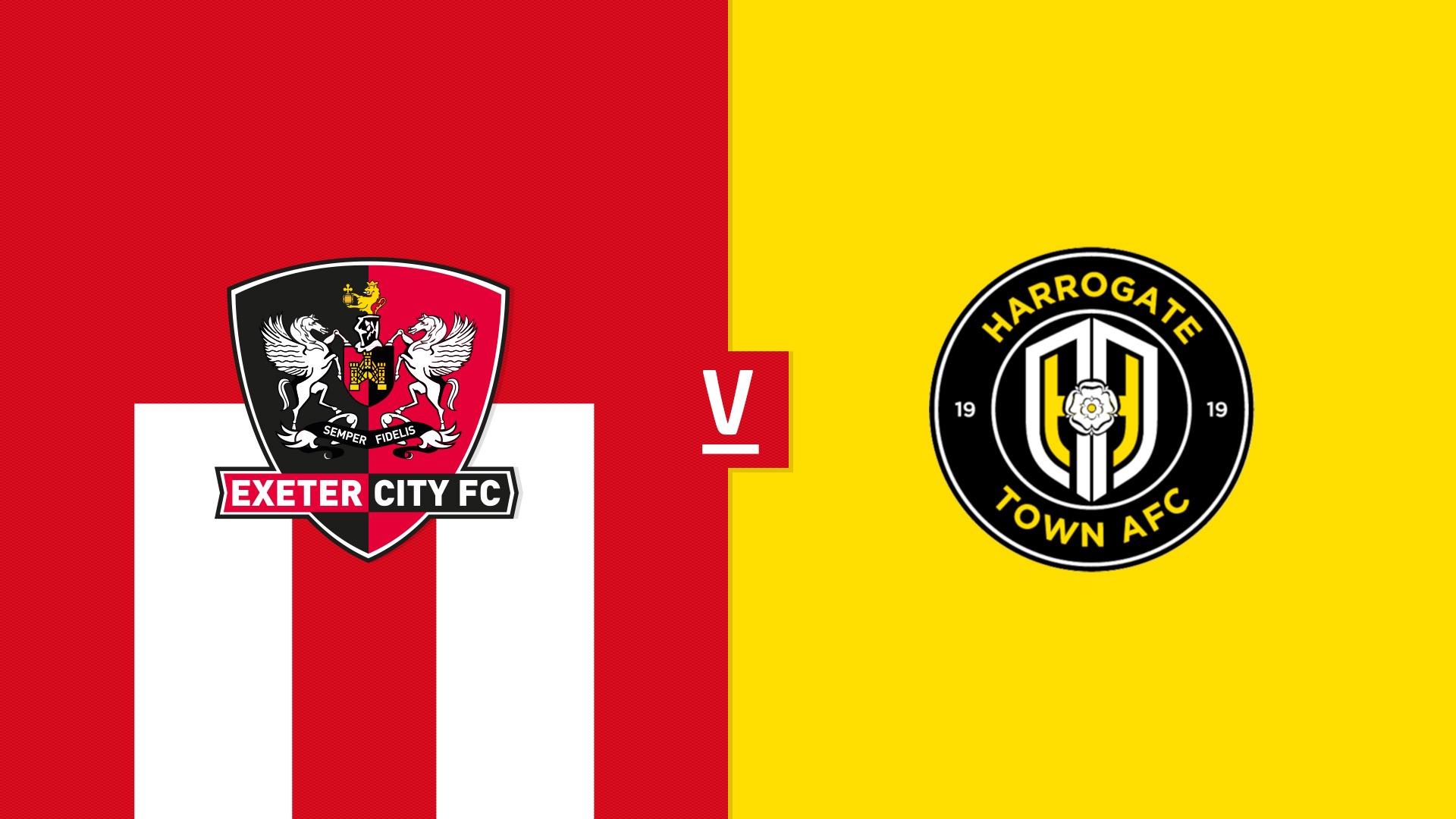 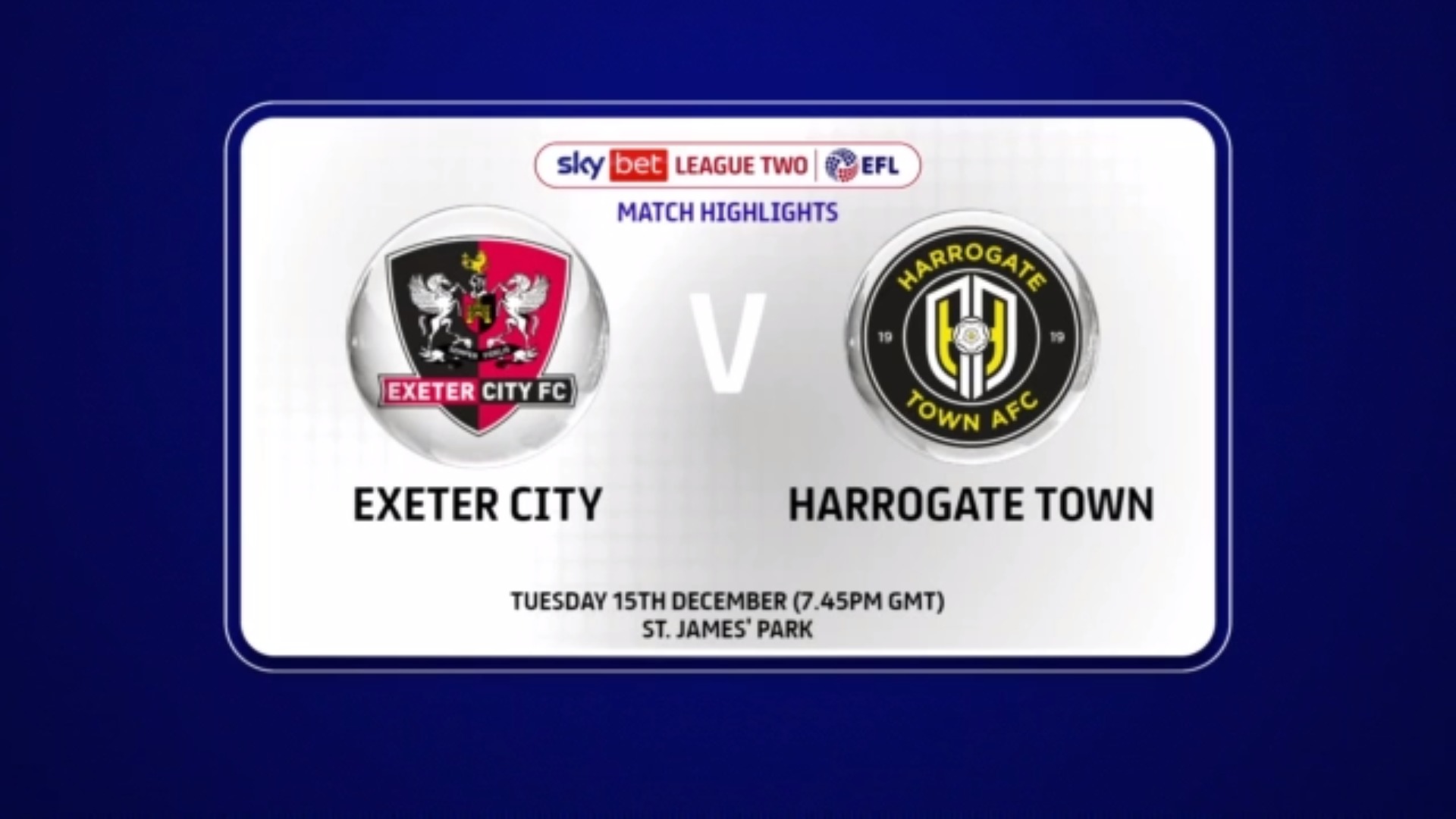 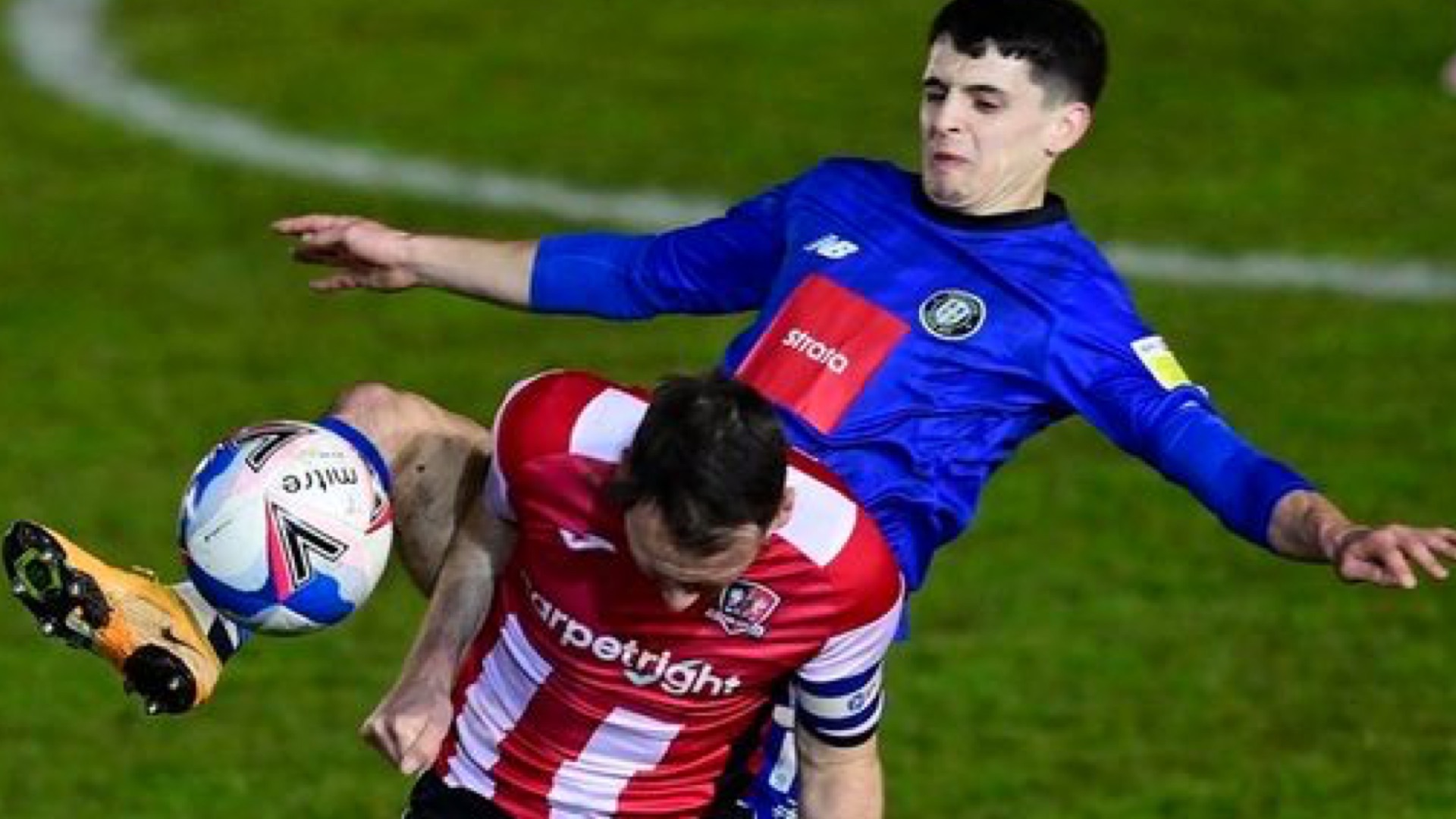