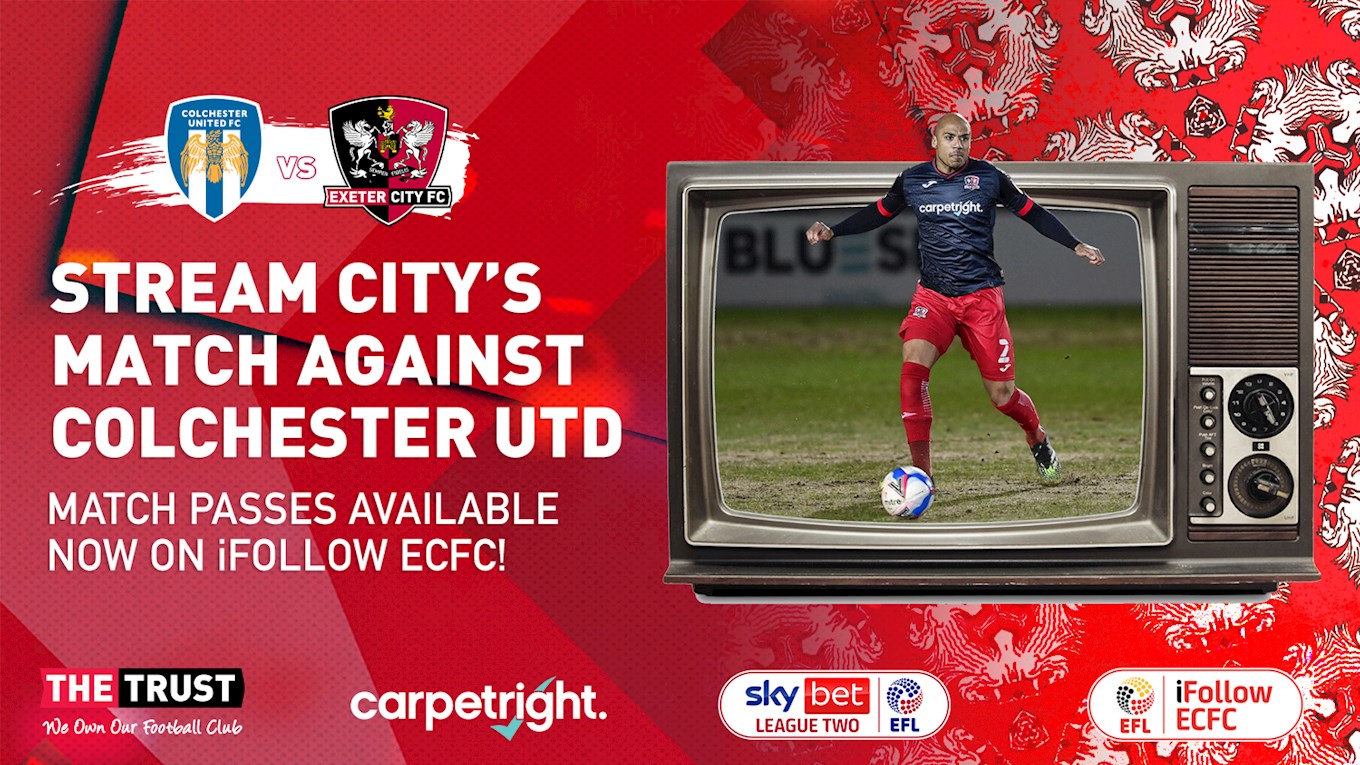 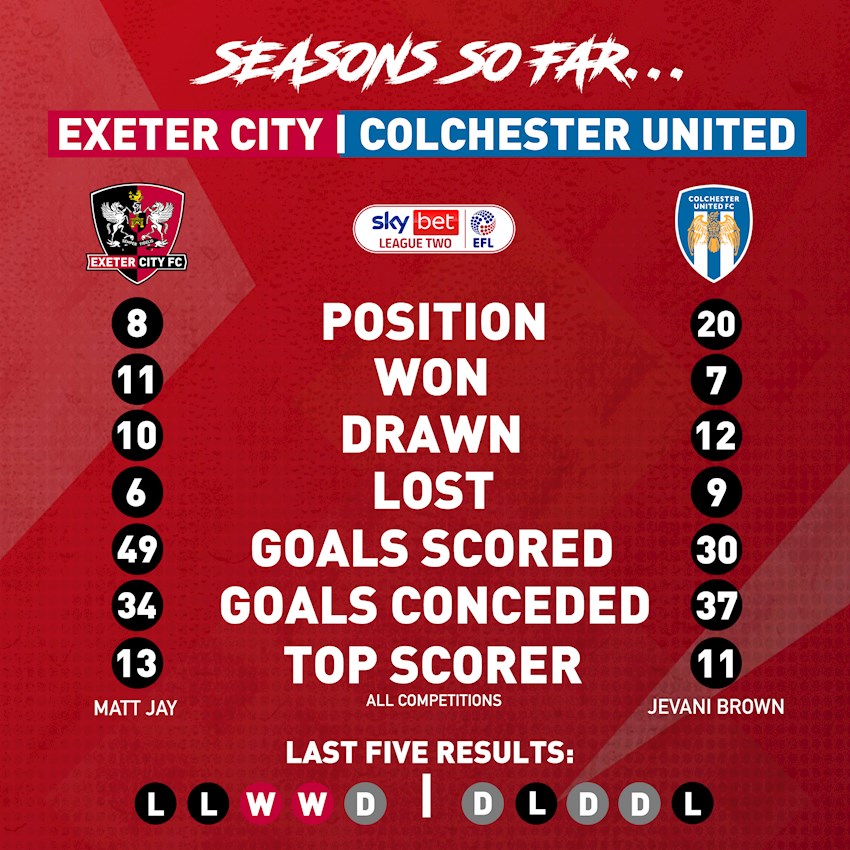 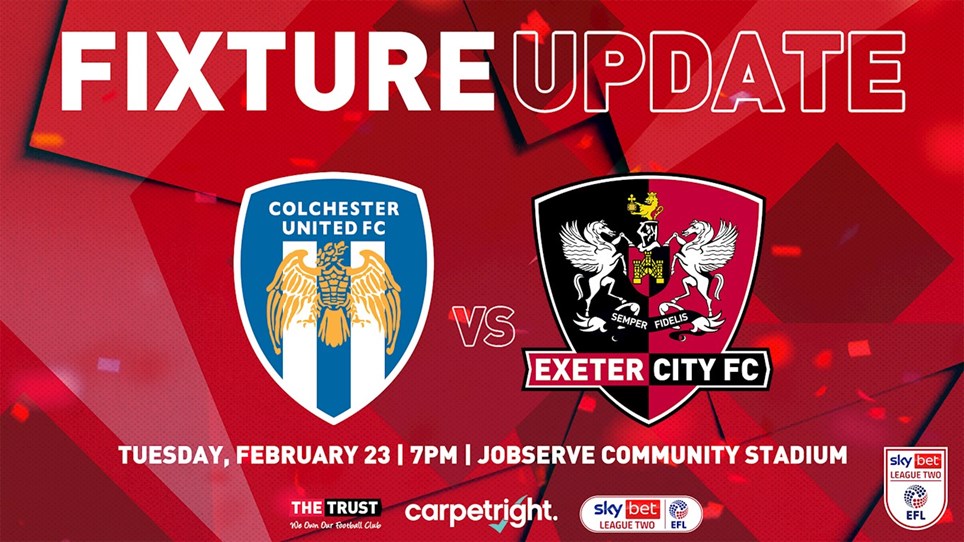 Exeter City leave Essex with all three points and remain unbeaten in February after a 2-1 win against Colchester United.

Both Robbie Willmott and Ben Seymour scored their first league goals for the Grecians to seal a 2-1 win at the JobServe Community Stadium, with Oteh clawing one back for the hosts.

Exeter City Manager Matt Taylor made four changes from the starting XI who faced Newport a week ago. Ryan Bowman and Alex Hatridge both missing out due to suspensions, making way for Lewis Page and Ben Seymour. Loanee Robbie Willmott came back into the side after being ineligible to play against his parent club, while Joel Randall started after a spell out with injury. Rory McArdle made it back to the bench after his freak injury against Stevenage earlier on in the month.

Exeter once again took on the manager’s notes and started the game on the front foot with Seymour making an instant impact inside the opening minutes with a dangerous cross into the box, aiming to pick out Matt Jay, but only able to get as far as the gloves of Gerken the U’s goalkeeper.

It was another early show of cards for the Grecians after having an early sending off last week, thankfully it was only a yellow with Tom Parkes being booked for a foul on Argyle loanee Nouble.

The Grecians had the ball in the back of the net inside twelve minutes as Matt Jay converted from the corner conceded by Smith, however the offside flag was shown. It was loanee Willmott who played the ball through for Matt Jay, who was caught offside.

Lewis Page required treatment inside twenty minutes after a nasty clash with Folivi after going up to claim a cross into the Exeter box. Thankfully after some treatment Page was able to return to the field and defend the resulting corner, which amounted to nothing after Doherty fired wide.

The Grecians made their mark on the scoresheet through Robbie Willmott after twenty-seven minutes. It was Josh Key with a superb cross into the six-yard box serving it on a plate for the Newport man to get his first goal for the club after signing a loan deal on deadline day in January.

After spending most of last Tuesday night defending a goal lead, Exeter were keen to double theirs quickly, with the hosts looking to bring themselves back into contention in what became a quick paced spell in the game.

The Grecians had a clear-cut chance just before the half time with Randall crossing into the penalty area and the hosts not being able to deal with the ball. Gerken came out to clear but only as far as Seymour who managed to get something on it, but the keeper claimed, and the ball looped over the crossbar before 2 minutes of added time due to Page’s injury.

The hosts made a double substitution at the start of the second half with Jevani Brown and Aramide Oteh taking the field for the U’s in place of Harriot and Folivi.

The pace from the first half continued after the break with both sides showing the intent to play attacking football. Joel Randall nutmegged a Colchester man with a back heel, feeding in MJ who is unable to get enough whip on the ball, seeing it just wide of the Colchester goal for the Grecian’s second.

After plenty of pressure from the Grecians they doubled their lead with Ben Seymour getting his first Football League goal for his home club with a header. The delivery came once again from Josh Key with Seymour leaping high to head it goalward and past Gerken.

Quickly the hosts reacted, and their deficit was halved with substitute Oteh striking low from close range into the bottom right corner to bring the home side back into contention.

With over seventy minutes played both sides made a flurry of substitutions with 5 player swaps taking place in that time, 3 from the Grecians with Jay, Key and Willmott making way for Atangana, Caprice and Sparkes. The hosts made 2 more changes, with Sarpong-Wiredu making way for Senior who netted a goal against Exeter in the play offs, and Chilvers leaving the field for Poku.

Sweeney went down and stayed down after a collision with goalkeeper Jokull Andresson, despite the referee initially deciding to play on much to the frustration of Manager Matt Taylor. The Irishman was seen to and was able to continue playing.

Atangana prevented the hosts from getting close to a second after getting back and tipping Nouble’s cross across the face of goal over the crossbar and out for a corner, which City clear.

With the several substitutes and the fourth official’s confusion with the board and numbers, 5 minutes were put up as the hosts were really throwing everything at it to get a draw, having not won a game in their last 6.

It was a fantastic bit of play from Jack Sparkes who dispossessed a Colchester man on the halfway line to nullify their attack and was able to run into tonnes of space in the hosts half, looking to play on Seymour who got too excited, running himself into an offside position. Sparkes ran all the way deep into the channel on the left side of goal to win a free kick, which ended up being the last kick of the game as Exeter get another three points on the road. 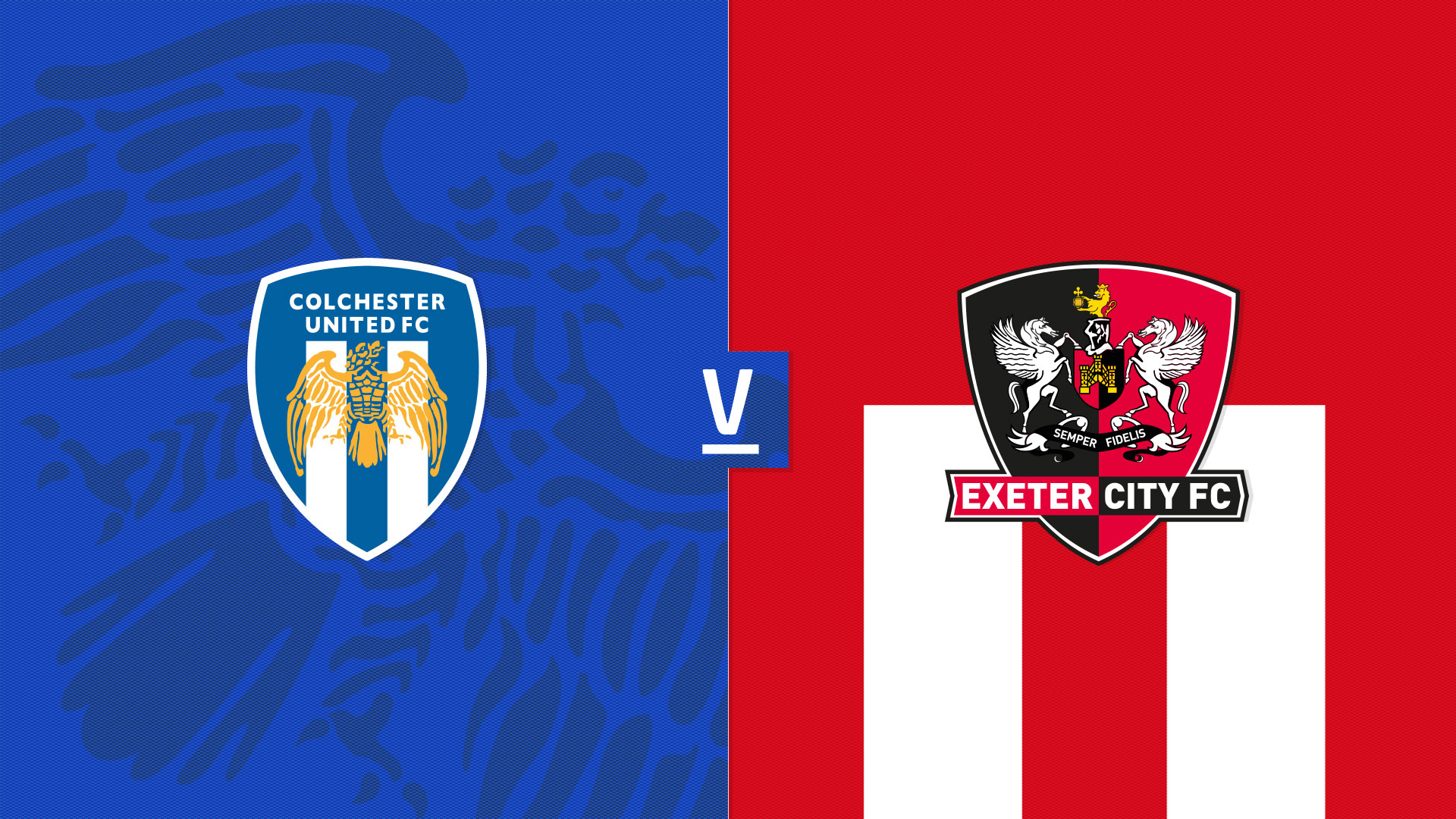 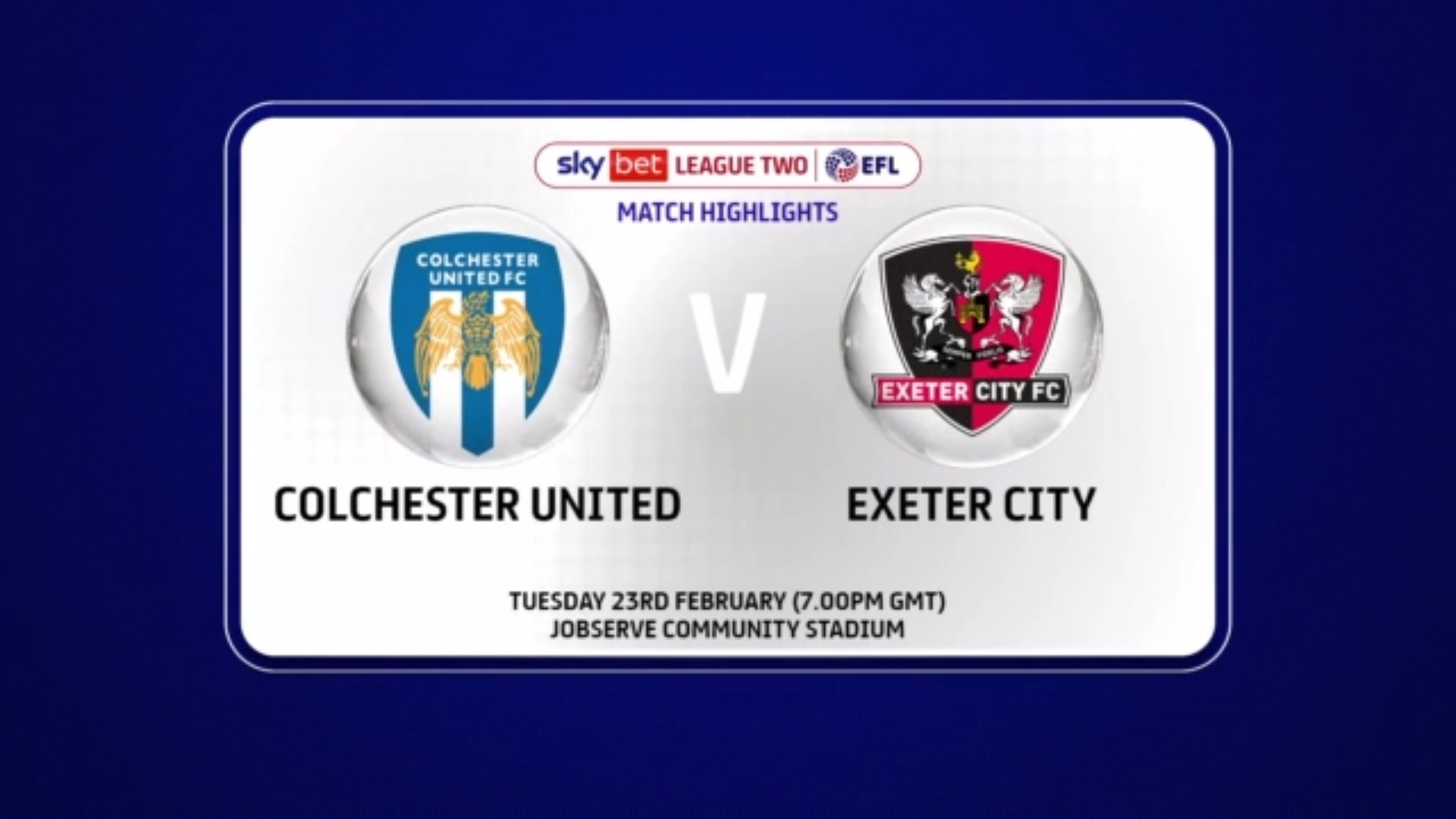 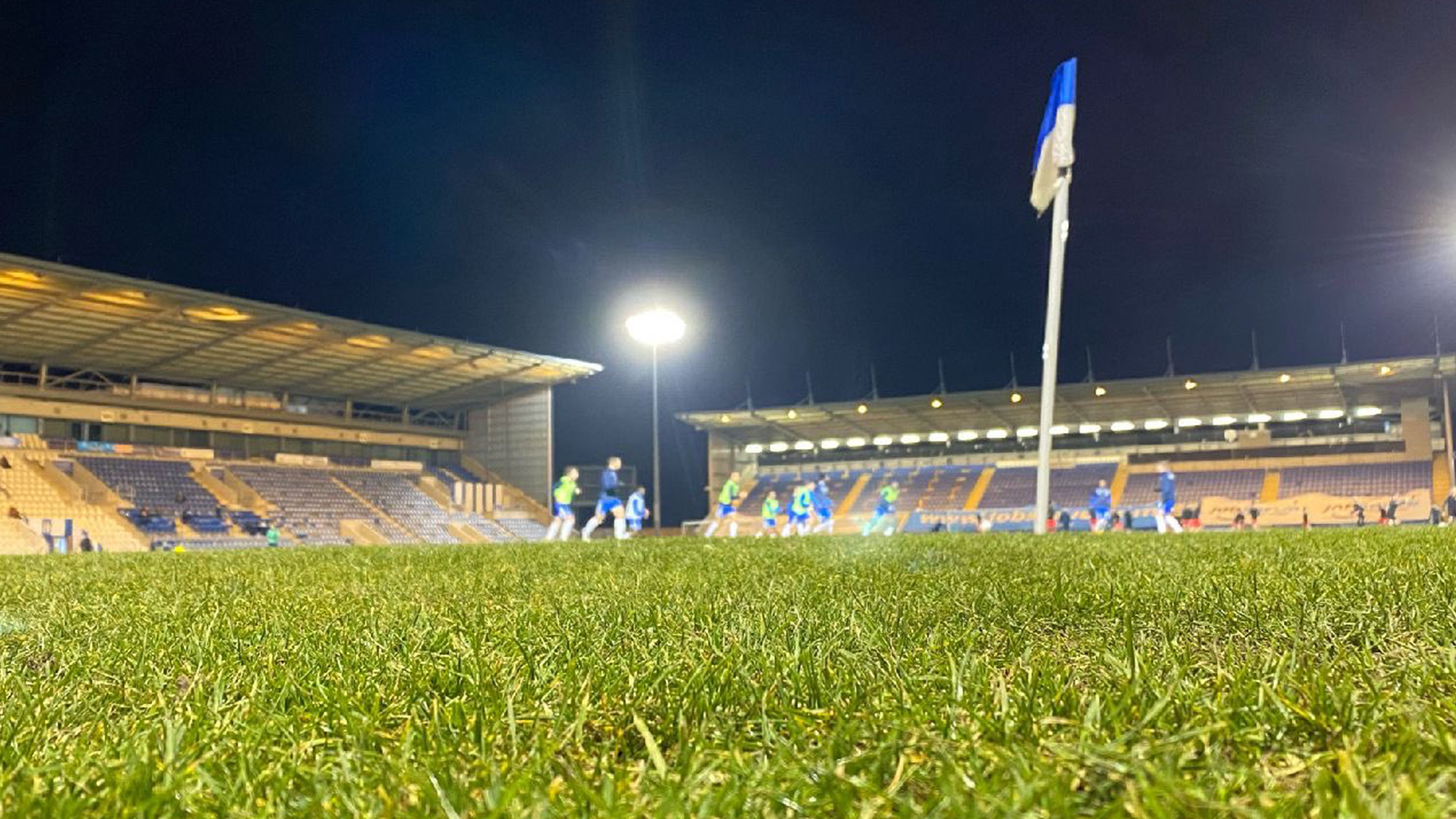