Exeter City are gearing up for Saturday's Emirates FA Cup Third Round clash with Sheffield Wednesday as they take to the pitch for the first time since Boxing Day.

Having seen away matches at Newport County and Barrow due to pitch issues, this will be the Grecians' first match since drawing 1-1 with Forest Green, and they have the opportunity to gain a cup scalp against Championship opposition.

Wednesday were last in action last Friday night when they beat Derby County 1-0 at Hillsborough.

With the Owls currently experience an outbreak of Covid-19 amongst their squad, it is likely they will be calling upon several youngsters to fill the rank for their trip to Devon, and the gaffer says this means the Championship outfit may be an unknown quanity.

"I have no idea what we're going to get from them on Saturday, but I need a clear indication what I expect from my players and that is an aggressive style of play.

"We can only focus on ourselves, and that's what I've said to my players. They'll still be very good players though!"

Hear more from Matt as he prepares for Saturday's game 👇

The match will be shown live exclusively on BT Sport Extra 5. Commentary only is available on iFollow.

To access BT Sport Extra viewers simply press the red button on their remote (on the Sky Digital Satellite Platform) or switch to BT Sport Extra on channel 527 (on BT TV). BT Sport Extra is included automatically within viewers' existing BT Sport pack, and as of September 25, is also available on Virgin Media.

Scotland international Callum Paterson scored the only goal as they beat Wayne Rooney's Derby County, just three days after the sacking of their manager Tony Pulis. 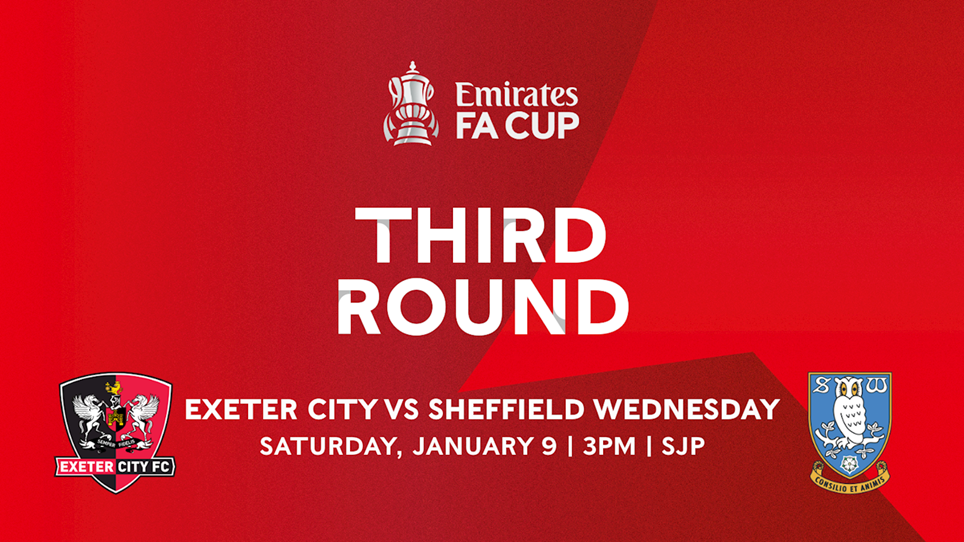 Exeter City's Emirates FA Cup journey came to an end as Championship quality ultimately shone through in a 2-0 loss to Sheffield Wednesday.

The Owls weathered the Exeter attacking storm and went ahead through Adam Reach’s first half volley, and the visitors put their name in the hat in the final moments with Callum Paterson’s tap-in.

City had chances through Matt Jay, Ryan Bowman and Rory McArdle but it wasn’t to be for Matt Taylor’s men.

The Cup gave Taylor a chance to switch around his squad, with Josh Key returning to the starting XI alongside Lewis’ Ward and Page. Covid struck Wednesday named young debutant Ryan Galvin.

Within a minute City almost took the lead. Page whipped a delightful ball across the box where Jay met the ball. Unfortunately, his headed effort drifted wide.

Bowman was gifted a gilt-edged chance on five minutes. Jay managed to squirm a ball through to the striker, who saw his side-footed effort aimed straight at Joe Wildsmith.

Reach drove a long-range effort toward Ward but was comfortably dealt with by the reinstated Keeper. Reach tried again from the halfway line much to the bemusement of his teammates.

City had glimpses in front of goal but Wednesday drew first blood.

Mid-way through the first half, the Exeter defence was breached. A simple lump forward caught the defence on their heels and Adam Reach snuck behind to fire the visitors in front.

The goal settled the visitors and limited City until half time.

Jack Sparkes came on at half-time to try and inject some life onto the left flank, and the substitute was influential in Exeter’s first chance of the second half. His overlap forced a corner for City. Jay’s set-piece was flicked on by Key at the front post, and somehow McArdle arriving at the far stick could not capitalise.

Alex Hunt could have doubled the Owls advantage but looped his shot high and wide.

Both teams turned to the bench to inject some life into the game. Nicky Law and Ben Seymour entered the fray for the Grecians.

Reach managed to get an attempt away mid-way through the second half after cutting inside to his left foot. Barry Bannan similarly tried his luck. Both comfortably halted by Ward.

Law was not too far away from equalising for City with five minutes left. Jake Caprice’s cross was met under heavy pressure by Law who could only steer his chance over.

Wednesday sealed their passage to the fourth round in the dying embers. Centre-back Liam Shaw picked the ball up in his own half and drove the ball seventy yards up the pitch before squaring to Callum Paterson who tapped home.

Not to be for City this year, but attention swiftly turns to the visit of Bolton Wanderers on Tuesday night.