Exeter City will be looking to make it three wins on the spin on Saturday, but will face a tough task as league leaders Cheltenham Town visit SJP at 3pm.

After midweek's 2-0 win at Scunthorpe on which City kept a third straight clean sheet and Matt Jay scored his fourth goal in as many days, the Grecians go into this match in good form, but face a formidable Robins side who are perched at the top of the league table.

Town did however lose in midweek - 3-1 at Mansfield Town - and will be wanting to put things right. That result ended a run of four straight league wins away from home.

Matt Taylor will have Tom Parkes available after suspension, while Pierce Sweeney is also back after coming off the bench at Scunthorpe on Tuesday night. He has also hinted that Sam Stubbs and Randell Williams are not far away from being given some minutes, and you can hear his full pre-match thoughts below 👇

"We know we are up against a good team this weekend. It's one of fourteen opportunities left," Taylor sai ahead of the game.

"Any team who finishes above Cheltenham this season will be there of there abouts. The game will not define us in any way and it won't define where we finish.

"It'll be our consistency over the fourteen games that defines that." 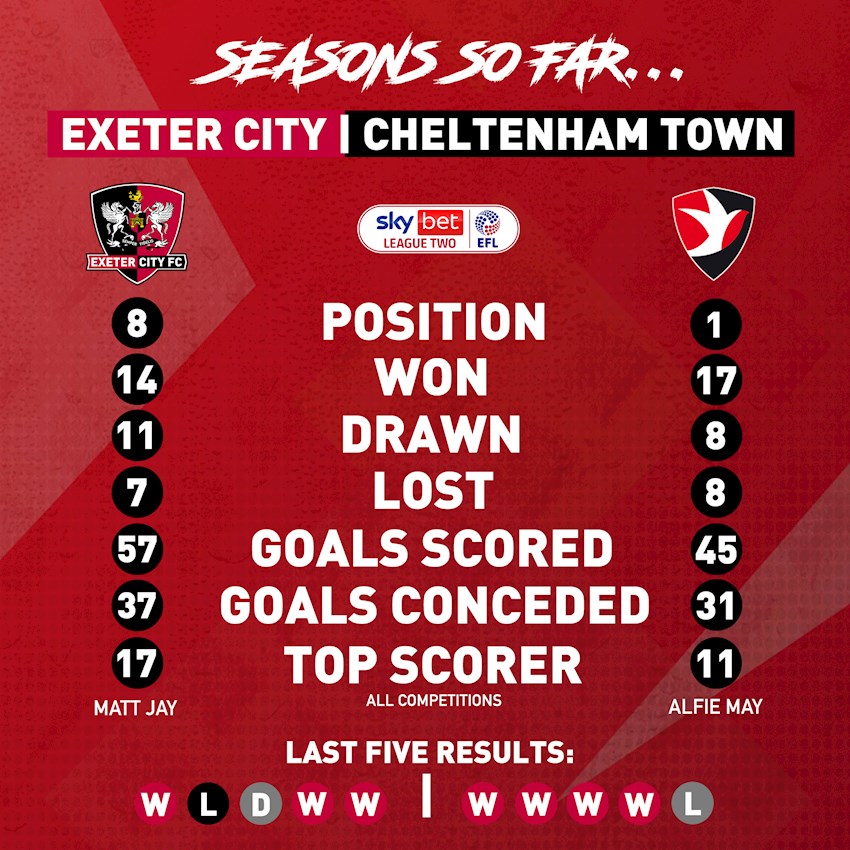 Cheltnenham took the league just after half time through Sam Smith, but three goals from the Stags in ten minutes turned the game on its head. Jordan Bowery found the net twice, either side of Jamie Reid's strike.

The Grecians were on the wrong end of an eight goal thriller at the Jonny Rocks Stadium in December, despite scoring three times. Archie Collins opened the scoring but City were soon 2-1 down after 15 minutes thanks to Liam Sercombe and Alfie May. It was 3-1 before the break through Sercombe's penalty. Matt Jay and Nicky Law both scored in the second half, but the Robins also found the net twice through Andy Williams and Will Boyle.

In a game that had very little going for it until the late stages, the only event separating the two teams came as substitute Andy Williams got a head to a loose ball in the box.

Manager Matt Taylor named 2 changes from the side that beat Scunthorpe 2-0 on Tuesday night. Jack Sparkes earned his place in the starting line-up after scoring his first league goal for the Grecians off the bench.

The visitors named 3 changes after they fell to a form ruining defeat against Mansfield. Former Grecian Liam Sercombe was named in the starting line-up for the Robins.

After a couple of days of some spells of heavy rain and strong winds, the pitch surface looked plenty better from the game who was postponed against Grimsby, but the strong wind chill continued throughout the game presenting a challenge for both sides.

There was slight worry early on as Jack Sparkes went down injured deep in the Exeter half, with Exeter being able to clear the danger as the ref stopped for a head injury. Thankfully, Sparkes was cleared to continue playing.

The Grecians had to weather some sustained pressure with a couple of corners for the visitors around 20 minutes, however, like for much of the first half chances we’re few and far between for both sides.

The visitors made their first substitute on half-time as Lloyd made way for May after spending a prolonged time at the end of the first half receiving some treatment. The Grecians remained the same as they did at the start of the first half

Both sides came into the second half with a renewed sense of aggression, with plenty of successful tackles taking place either side of the halfway line.

City had a good chance just before the hour mark as Sparkes played in Randall with a neat through ball but caught the winger offside. Randall struck low and forced the goalkeeper into a save as the flag was raised for offside.

After spending sixty minutes at deadlock, Matt Taylor brought on some more attacking threat in the form of Newport loanee Robbie Willmott as Jake Caprice came off.

A huge chance for Exeter just before seventy minutes with the wind picking up as Archie Collins found Jake Taylor in the area. A superb ball over the Cheltenham back line from Archie picked out Taylor beautifully who struck on the volley from 6 yards out, but it was slightly over.

Taylor made his second substitute just after with Sparkes coming of for Lewis Page as the rain started to pour at St James’ Park. The Grecians chancing the wind being able to carry the ball forward as they attack towards the St James Road End.

In a game with few chances the visitors almost netted in their own goal with the Grecians frenetic pace forcing Tozer to make a difficult touch deep in their box but managed to send it out for an Exeter corner, which amounted to nothing. The corner did create some sustained pressure from the Grecians as they looked to earn the full 3 points from the game.

Substitute Willmott had the best chance of the day so far late on into the second half as he was played on by a long ball and chased but struck directly into the hands of the Cheltenham goalkeeper.

Immediately from the resulting goal kick, the visitors also had their best chance of the game, forcing Andresson to make a great save in a game where he hasn’t had too much to do. It was Alfie May with the shot as Jokull tipped the strong strike over the bar.

In a game that was dictated largely by the weather, Exeter had a deep long throw to contend with just before the death of the game as they looked into the long sun.

After a long throw from Tozer, substitute Williams got a late goal as he connected on the end of the throw as both himself and an Exeter man went up for the ball. 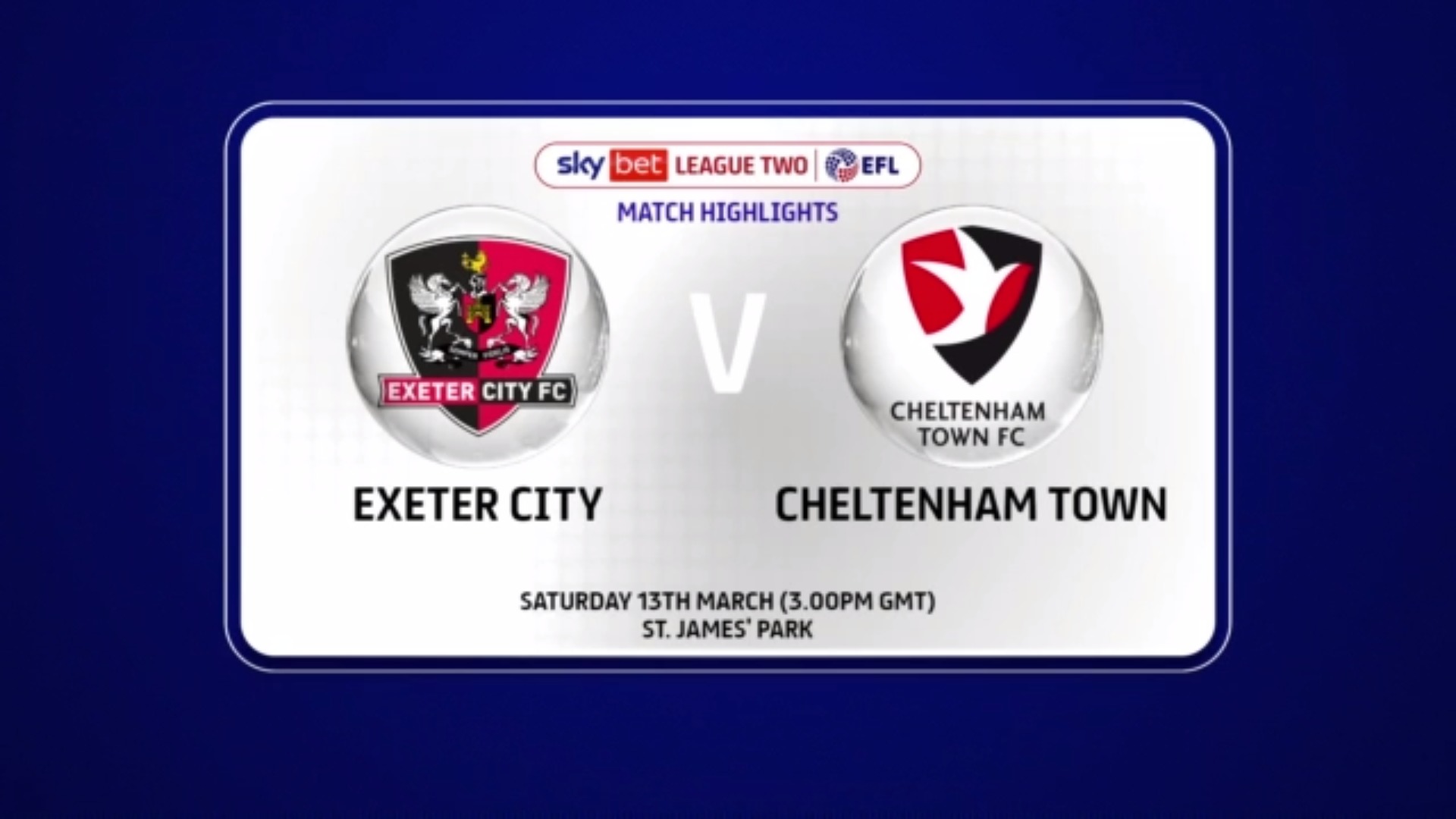 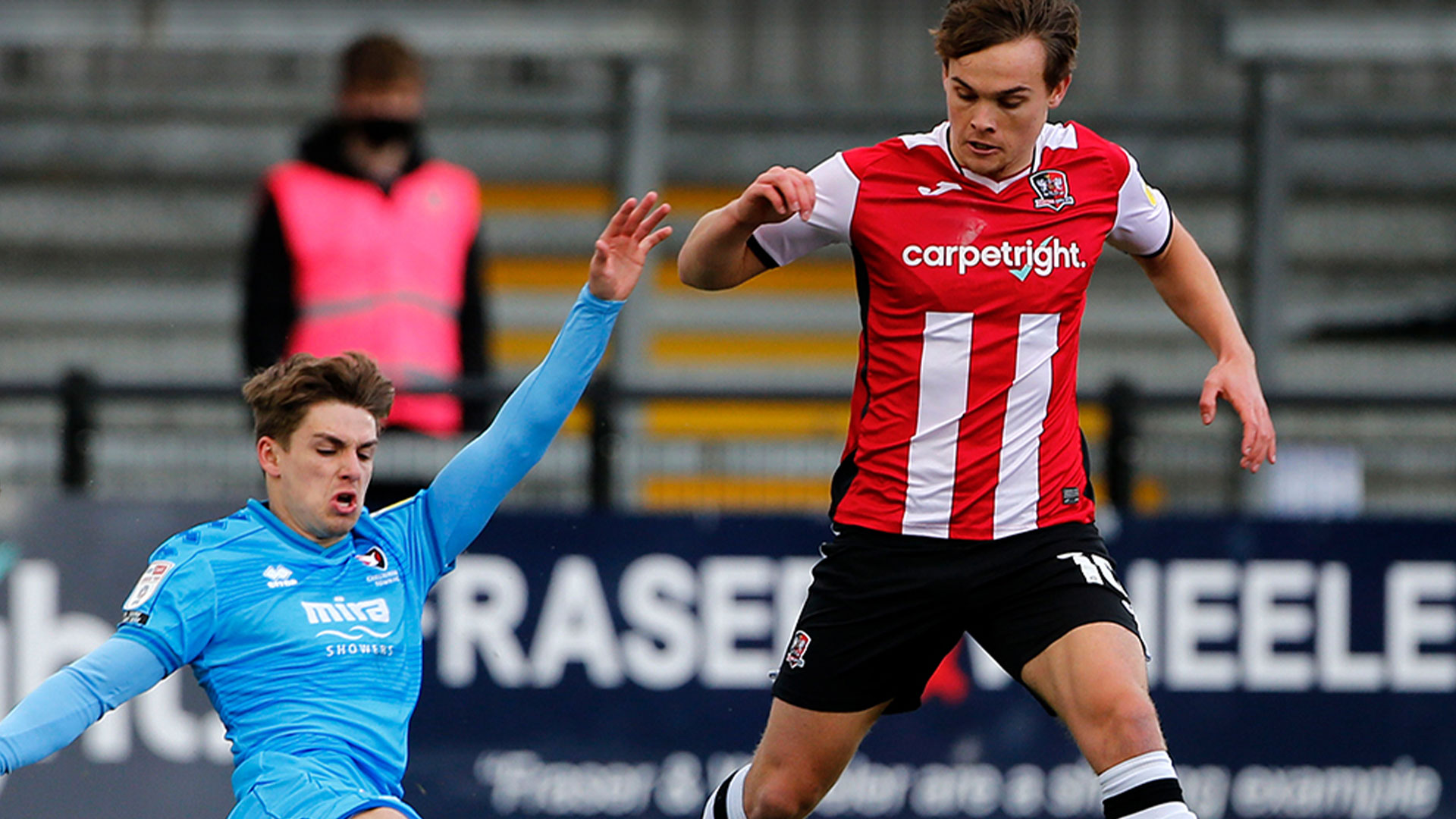