Exeter City will be looking to quickly return to winning ways as Walsall visit the Park for a 7pm kick-off on Tuesday night.

The Grecians fine run of form that saw them four unbeaten and ten points gained came to an end at Crawley Town on Saturday, as ten-man City were beaten 2-0.

Tuesday's match under the lights is the first of City's back-to-back home games and comes against a Saddlers side that haven't been in the best of form in recent weeks.

Walsall are without a win in their last five matches, and were narrowly beaten 2-1 by in-from Bradford City on Saturday.

The Grecians will be without Tom Parkes and Ryan Bowman who are both serving suspensions.

Ahead of the match, City forward Alex Fisher said the team are looking forward to returning to home soil after travelling hundreds of miles on the road.

"With two home games coming up it will be a good opportunity to pick up maximum points. said Alex.

"As cliche as it sounds we like to focus on our approach. We know what they are going to be about and we look forward to this opportunity as it's a home game where we have a good record.

Hear more from Alex below:

Bring on the Saddlers! As we return to St James Park on Tuesday evening, so does a packed edition of our award-winning programme, The Grecian.

In this week’s edition we speak to Josh Key, whose heroics at Colchester produced two assists that helped the club to at three points.

In the interview, Josh talks about an unexpected breakthrough season, the club’s ‘Band of Brothers’, and how his faith helps him as a player and as a team mate. 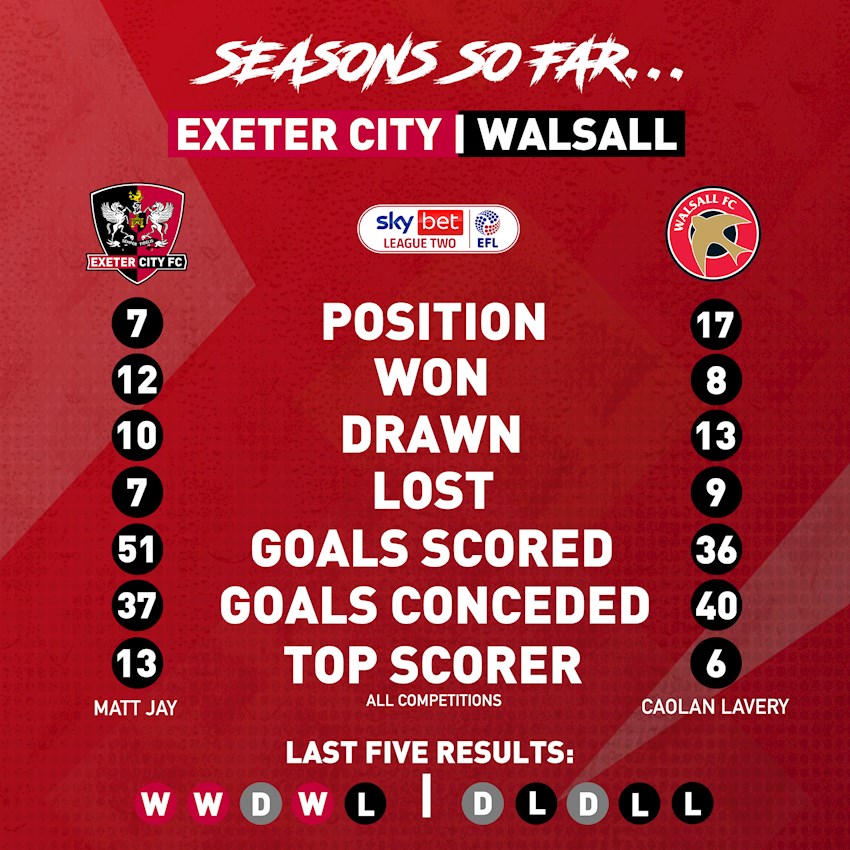 Walsall suffered their second successive defeat despite a spirited late rally against Bradford City. Goals from Levi Sutton and Andy Cook gave the Bantums a two-goal lead before Dan Scarr pulled a goal back, but they couldn't find an equaliser.

Exeter City made it four league games unbeaten after a goalless draw away to Walsall at the Banks's Stadium back in October. 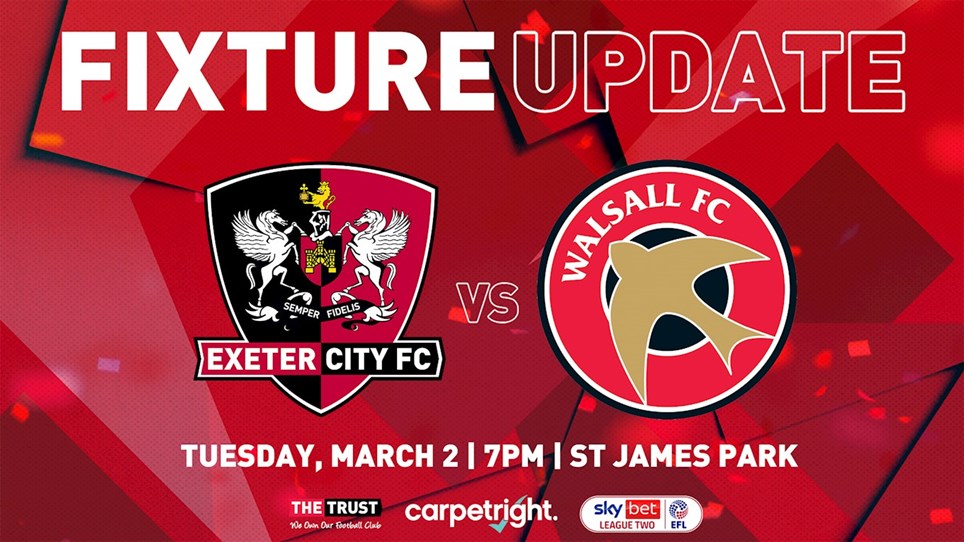 Exeter City open their March account with a point and a clean sheet after a 0-0 draw against Walsall at SJP.

Neither side could break the deadlock across 90 minutes, despite Exeter having a large presence in the game.

City Manager Matt Taylor named five changes to the side that were defeated by Colchester on Saturday. Rory McArdle made his way back into the starting XI after a spell out due to injury and youngster Jordan Dyer made his way to the bench.

It was Matt Jay and Ben Seymour that combined up top for the Grecians with the academy graduates making the partnership due to Ryan Bowman’s 3 match suspension after being sent off against Newport. The lively partnership was clear to see early as MJ found himself in space after just 2 minutes, chipping it into the area but straight to the goalkeeper as opposed to his partner Seymour.

The physicality of both teams was also clear to see from the offset with fouls being conceded from the off. After 4 minutes, a free kick was given Exeter’s way after Jay was fouled on the right-wing. The Grecian number 17 also stood over the set piece, with the ball making its way to Robbie Willmott who struck cleanly but was defended by the Walsall back line.

With a penalty decision going against Exeter in their last game, there were shouts for a Grecian penalty early on after Seymour was brought down in the box, but the ref was having none of it.

The visitors had their first chance of the game after twelve minutes as Stuart Sinclair found Caolan Lavery with a long through ball, the striker got it away, but the ball was deflected by Key and behind for a corner which came to nothing.

The Grecians saw a large amount of the possession and chances throughout the first half, with the hosts responding with some organised defending and hard work by Roberts.

Roberts had plenty of work to do in the first half. Key made a break with some flair down the right and into space, flashing the ball into the box and narrowly missing the crossbar with the Walsall keeper putting it over. The resulting corner supplied the ball into the box through Collins, with Key heading just wide.

There were more penalty shouts for the home side as it looked like a Walsall handball in the box after Taylor’s shot, set up by Joel Randall, made its way goalward, but once again it wasn’t to be so.

The visitors made two substitutions at half time in order to make sure the half went their way in the form of Reid and Cockerill-Mollett coming on in place of Gordon and Vincent. Exeter remained as they did when they lined up for the first half.

The ball was in the back of the Walsall net after fifty minutes after Josh Key won a free kick just outside of the box after being felled by Melbourne who also found himself in the referee’s book in the first yellow card of the evening. Jay stood over the kick which he curled into the sliding in legs of the returned Rory McArdle who slid it into goal but was adjudged to be offside.

The Grecians first sub came after seventy-three minutes with skipper Jake Taylor making way for Nigel Atangana after a game long battle in the midfield. McArdle took the armband for the Grecians.

After the visitors had some time inside the City  half, Joel bombed down the left making plenty of ground and with the Walsall goalkeeper, and plenty of the Grecians players expecting a cross shot from deep and almost caught Roberts off guard but he got a hand to it and pushed it out for a corner.

The visitors looked to build a reaction to the majority City presence in the game breaking on the counter from the cleared corner, but it is ended by the Grecians defence.

The second change came at eighty-three minutes with Randall leaving the field in place of Jack Sparkes, with the games coming thick and fast and manager Matt Taylor looking to preserve bodies.

There was plenty of head tennis in the closing chapters of normal time with Grecians unable to clear the Walsall threat that came from Perry being hauled down by Collins almost immediately after him coming on. Thankfully, Page being brought down in the Exeter box was the relief the Grecians needed with Jokull Andresson able to get a long kick away.

The game sprung into life with increased tempo just before the fourth official indicated three additional minutes added time for the Grecians to get themselves on the score sheet.

Quickly after the board came up Sparkes was cleaned out at the by-line and after some delay the referee gave a free kick. It was taken by Sparkes and curled in and cleared for a corner, which was also dealt with.

After a lively last ten minutes with the visitors starting to challenge for all three points, neither side could break the deadlock and the Grecians had to settle for a point in the opening of their March campaign.

Exeter City are back in Sky Bet League Two action this weekend as they face Leyton Orient at the Park in a 1 o’clock kick off. 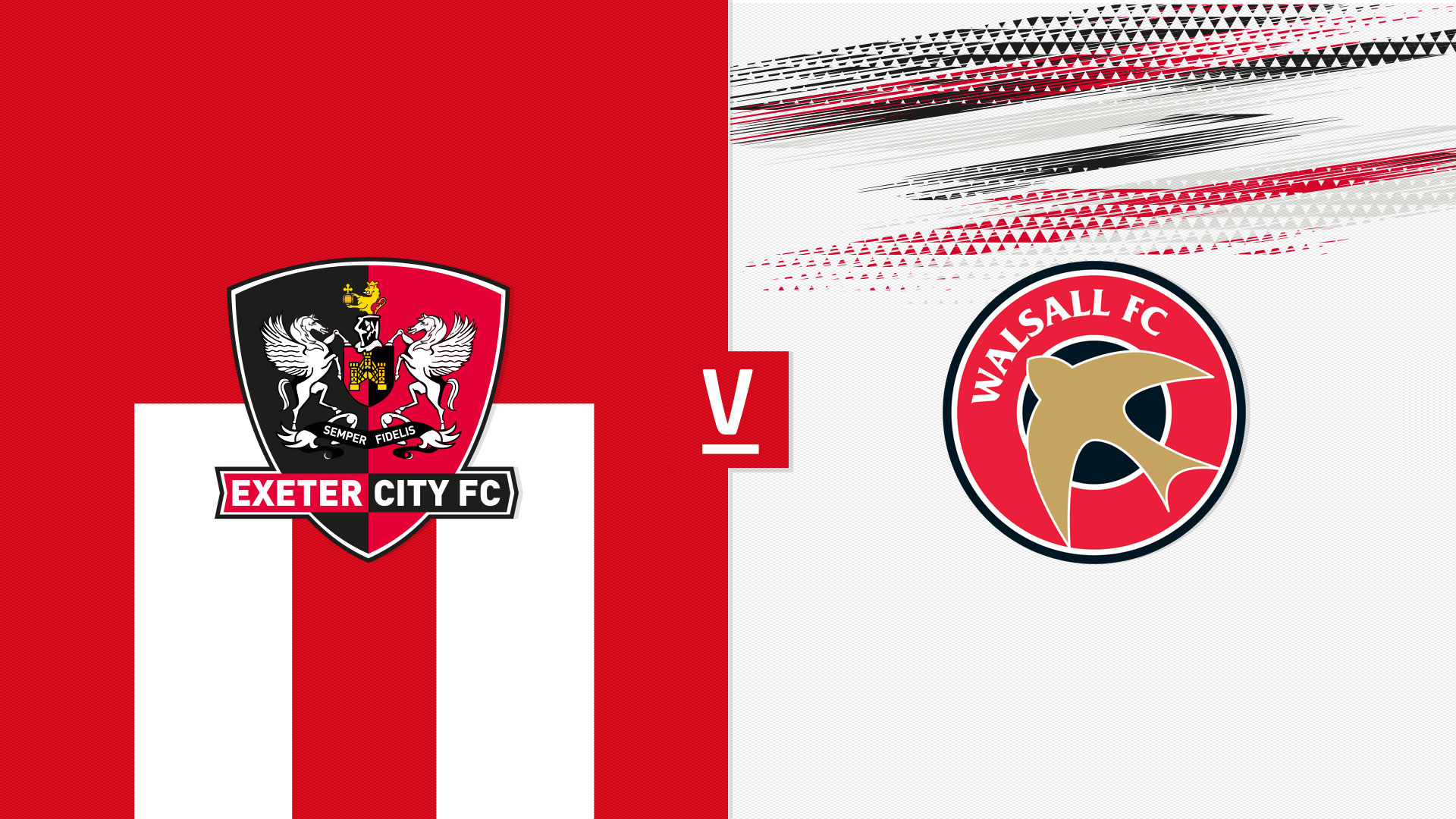 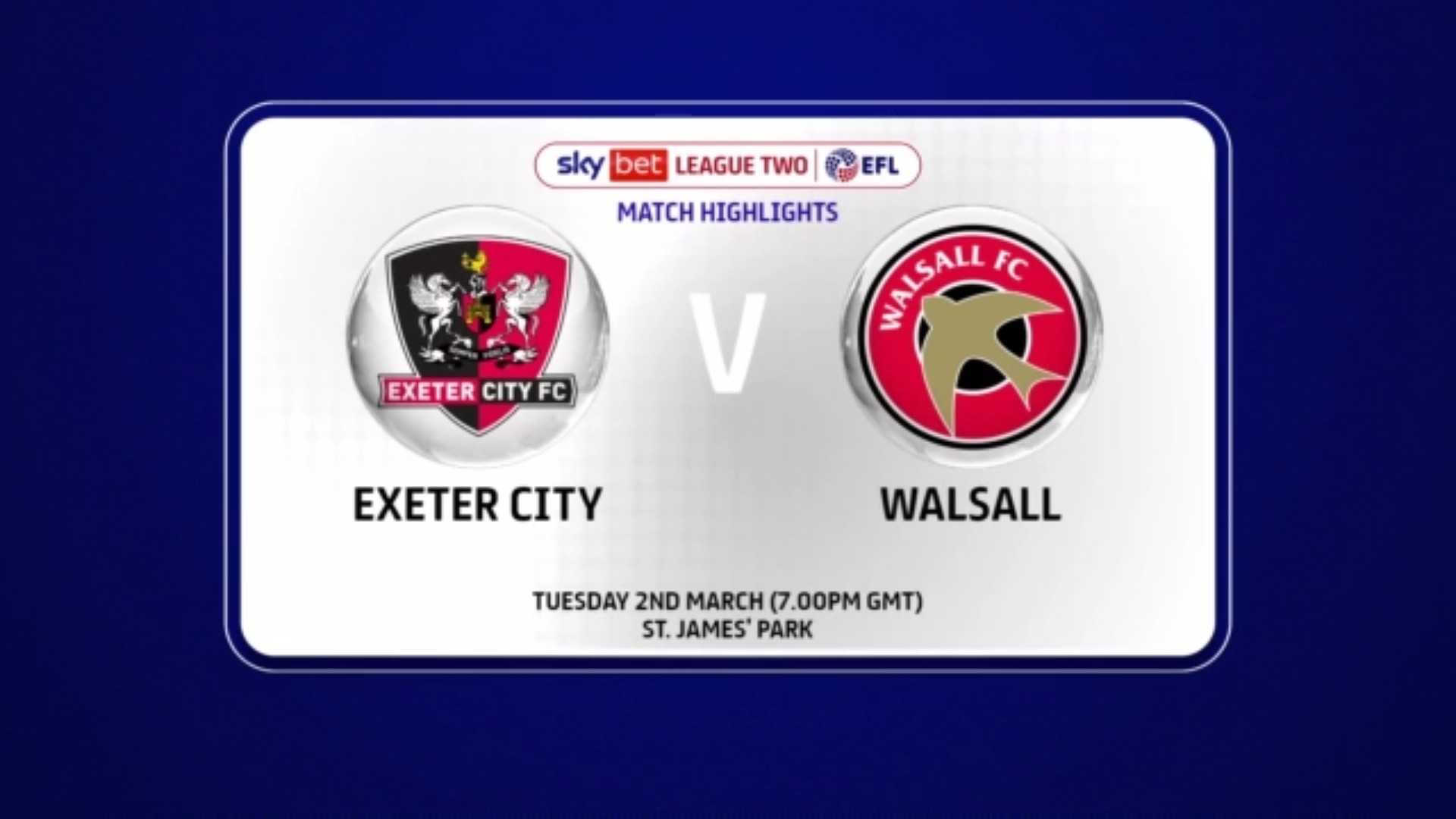 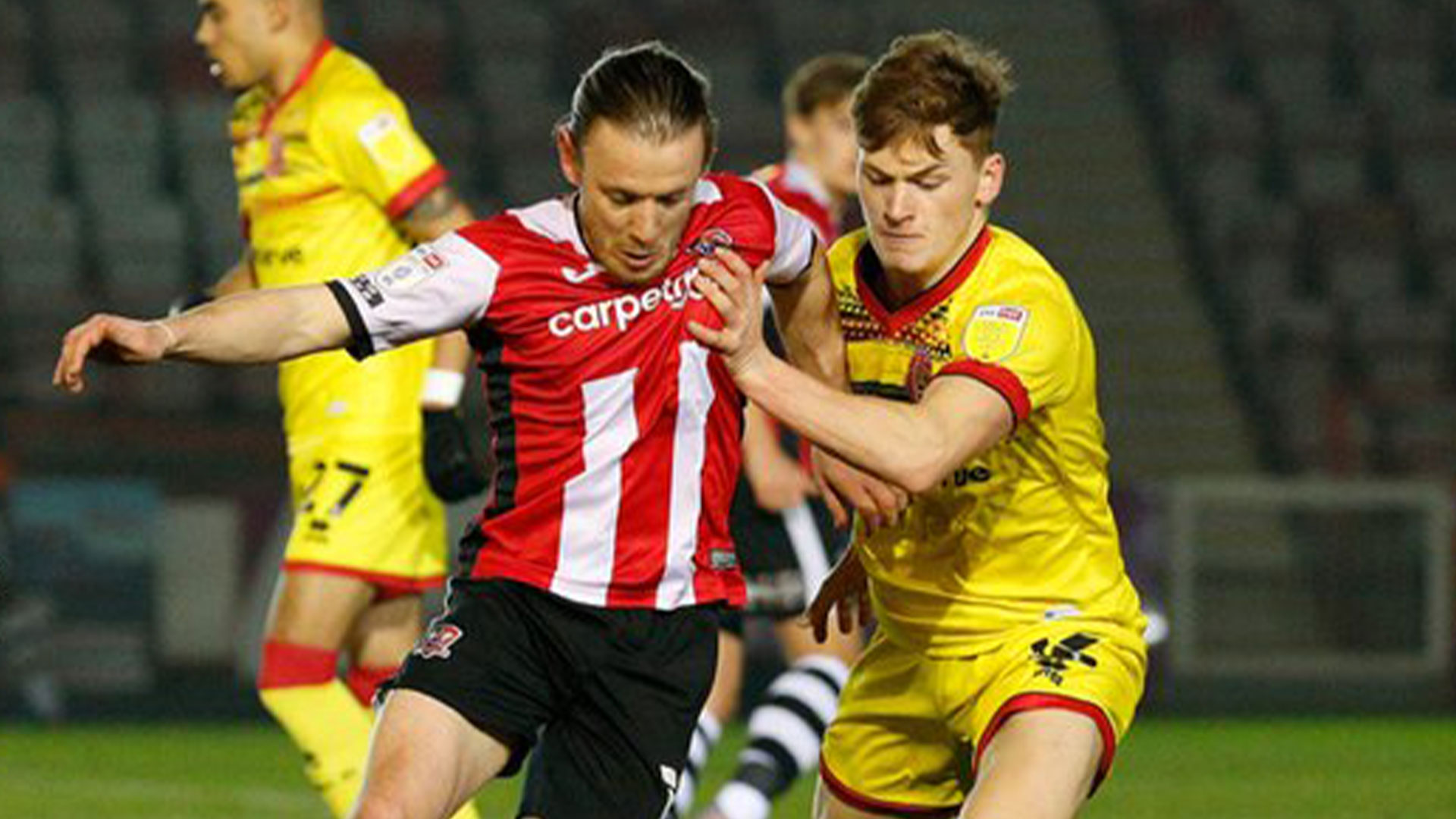