Exeter City will be looking to build on Saturday's thumping 4-0 win over Leyton Orient as they travel to face Scunthorpe United in a 7pm kick-off at the Sands Venue Stadium.

City will be looking to move back into the play-off places ahead of a tough couple of weeks ahead where they face promotion rivals Cheltenham Town and Tranmere Rovers.

Scunthorpe United picked up an impressive point away at Salford City on Saturday as Abo Eisa scored from the spot, and they will have eyes on avenging their earlier 3-1 defeat to the Grecians.

City will be without Tom Parkes, who serves the final match of his suspension.

Speaking about the threat Scunthorpe pose Joel added: "If we can bring our intensity like we did on Saturday, I don't think we need to worry to much about Scunthorpe. If we worry about ourselves and what we can do we should get the job done.

You can hear more from Joel 👇 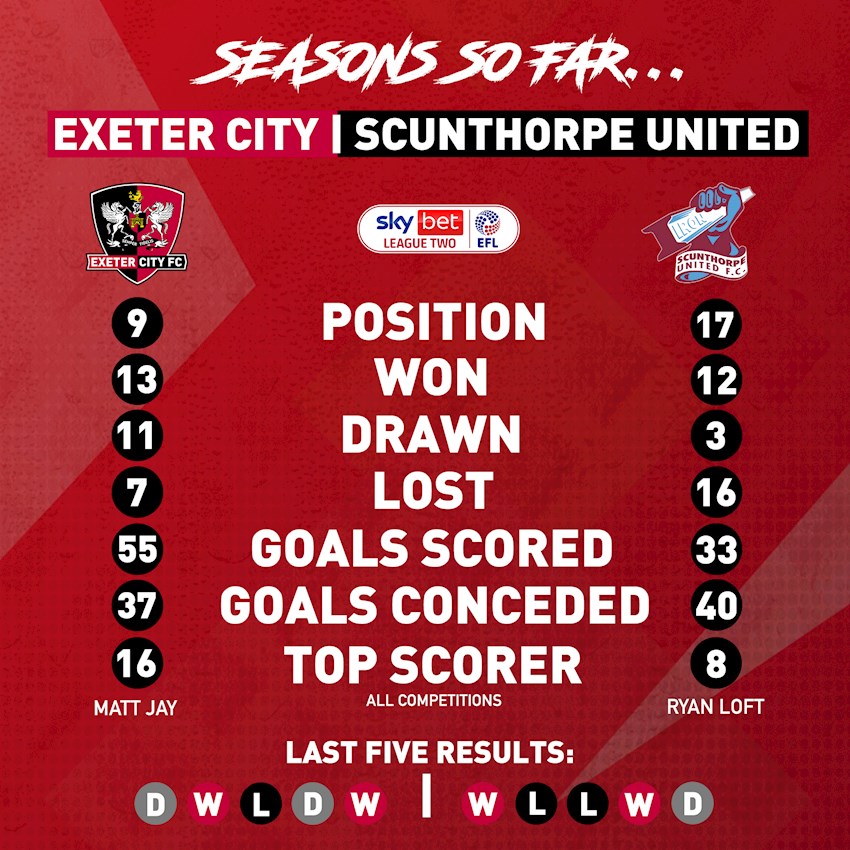 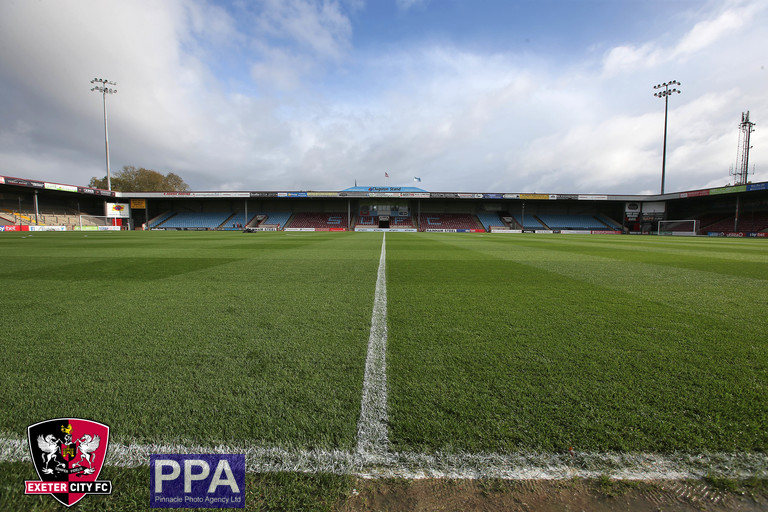 Abo Eisa scored his seventh goal of the season from the penalty spot to earn the Iron a point in a 1-1 draw at promotion-chasing Salford City on Saturday.

Exeter City made it six games unbeaten in the league, after convincingly beating Scunthorpe United 3-1 at a wet St James Park. Joel Randall and Matt Jay both netted their fourth goals on the season, with Jake Taylor scoring on 90 minutes to bag in back to back games, and secure the three points for City. 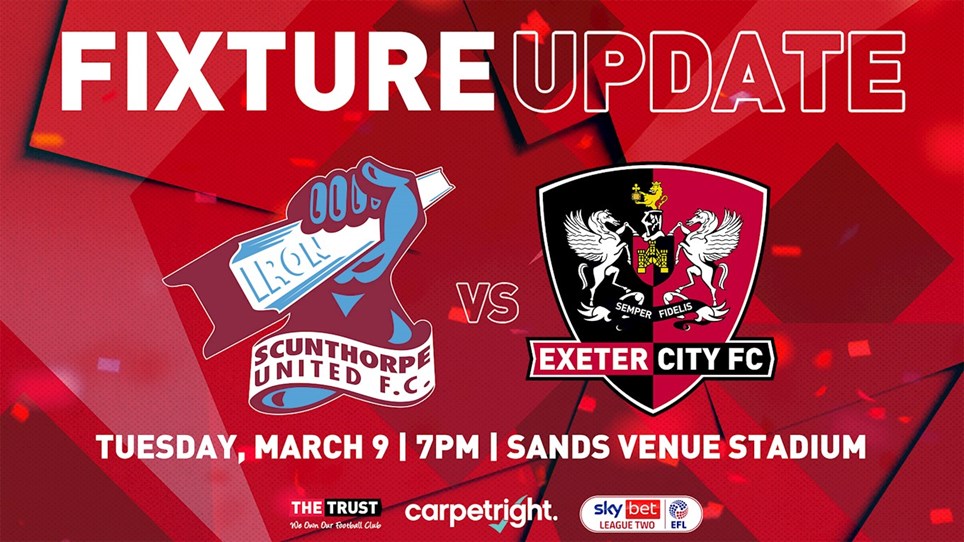 Jay opened the scoring after eleven minutes with a whipped set-piece to find the top corner, which set the Grecians on their way. Second half substitute Sparkes fired home late on- to put the result beyond any reasonable doubt.

Scunthorpe had half-chances of their own but rarely threatened Jökull Andrésson in the City goal, as the Grecians pick up points on the road in a fairly comfortable manner.

Matt Taylor stuck with thesame formula that dispatched Leyton Orient for four on Saturday. The only change to the squad was a welcome return for Pierce Sweeney who made the bench for Jordan Dyer.

Exeter in their changed luminous yellow and purple had the better of the opening exchanges and forced a corner on the left-hand side, but the short ball was easily snuffed out by the home side.

The early pressure paid on the eleven-minute mark though, with another strike for the man-in-form Matt Jay.

Ryan Bowman done well to win a dangerous free-kick twenty-five yards out and central. MJ made a beeline for the ball with only one thought on his mind.

Fresh from the weekend’s hat-trick, Jay curled in his third goal in three games against Scunthorpe, with an absolute pearler into the top right corner. A perfect start for City.

The Grecians built momentum and Josh Key’s dangerous cross from the right had to be well dealt with at the near post by Mason O’Malley. Key’s enthusiasm however ended the chance, fouling in the resulting melee from the corner.

Scunthorpe had a chance for themselves to put the ball in the box. A cheap foul gave O’Malley to send into the box, but his usual precision was no trouble for the Exeter defence on this occasion. Alex Hartridge proving his experience on his 22nd birthday- heading away.

Matt Jay had another sight of goal on 25 minutes. Neat interchange down the right saw Jake Taylor break into the box. The captain’s pull back was met by Jay’s backheel, but the effort was stopped by Mark Howard between the Scunny sticks.

Jökull Andrésson had his first call-to-arms on the half hour. Good play by the Clarets seemed to have put Abo Eisa away, but the young Icelander was quick off his line to claim. Up the other end, Joel Randall had speculative volley go over the bar and nestle into the terrace behind.

The home side calmed the storm mid-way through the first half and Jai Rowe let fly from an ambitious range, but his effort was undesirable.

The home side came out of the second-half traps with more intent. Former City-loanee Ryan Loft having is first, and only attempt of the game- trickling safely wide.

United began to play with some more confidence going forward and Andrésson was on hand to claim a looping attempt. Exeter threatened down the left in the next phase. Another enticing ball across the box from Page was smartly defended by the Iron.

Exeter carved a chance for Bowman on 53 minutes. Crafty wing-play between Taylor and Wilmott created an overlap on the right-hand side. The latter’s low cross was flicked goalward by Bowman by Clarke, who was tight to his man, and diverted the ball wide.

Matt Jay was gifted a chance to replicate his first half goal. Lewis Page was brought down in a similar position to the first. The City Number 17 took aim and Howard got across very well to tip it wide.

The Iron created their first real chance of the game on the hour. Rowe snuck in behind the Grecian back line but dragged his shot just wide of the far stick.

MJ, ever involved in the game, had a glorious opportunity to double Exeter’s advantage. Randall was set away down the left-hand side by a perfectly weighted ball by Page. The 21-year-old pulled the ball back almost on a plate for Jay, yet his side foot flew past the post.

The longer the game went on the more confident Scunthorpe became. O’Malley proved his prowess from the dead ball. His high delivery into the Grecian box on 63 minutes evaded everyone bar Jordan Clarke creeping at the far post. The Scunthorpe captain however could not steer his head on target.

Scunthorpe were almost level with 21 minutes to go. Substitute Kevin Van Veen launched a wide set piece into the danger-zone. Alfie Beestin nodded the ball back across the face of goal to no prevail.

All eyes were on referee Seb Stockbridge with seventeen minutes left on the clock. Jay picked out Randall goalside of the United defence but was bundled over with the goal at his mercy. No decision meant the ball was half-cleared. The visitors kept the ball alive, and Jake Taylor pulled a shot wide.

Matt Taylor freshened up the side and almost paid immediate dividends to his team.

Jake Caprice marked his introduction with a key part in a bright move down the right flank. His ball inside to Jake Taylor invited movement from the City front line. Jay proved an outlet and set Taylor up for a blocked chance. From the loose ball, Jay found Randall on the run and his first-time strike skimmed the post on its way wide.

Exeter City finally made the points safe in some fashion. Jack Sparkes capitalised on the loose ball on the edge of the Scunthorpe box. The winger held off the pressure from the Iron defenders, shimmied onto his right foot and fired in his second goal of this campaign.

A fine evenings work for the Grecians who go into Saturday’s game with leaders Cheltenham full of confidence. 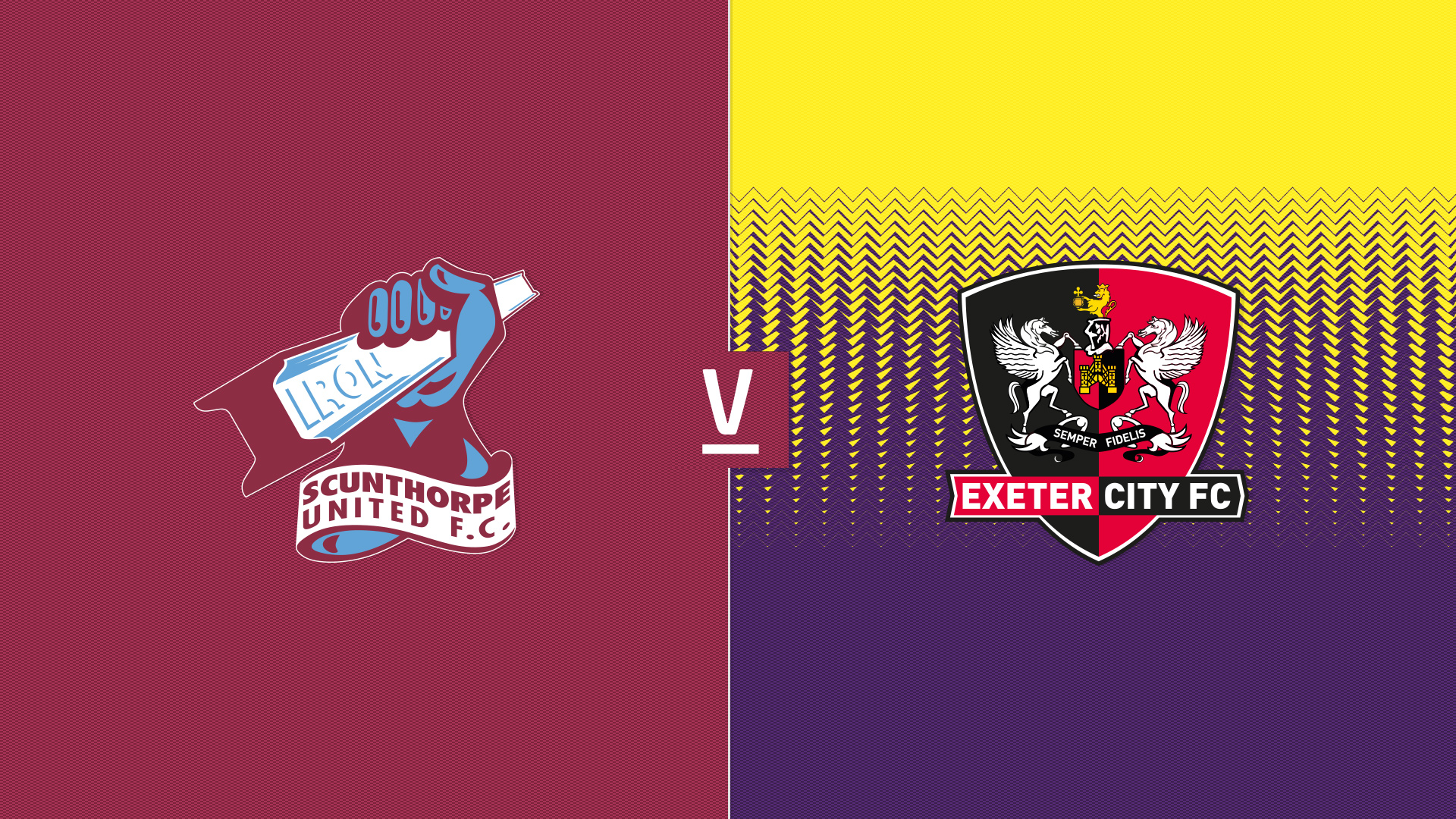 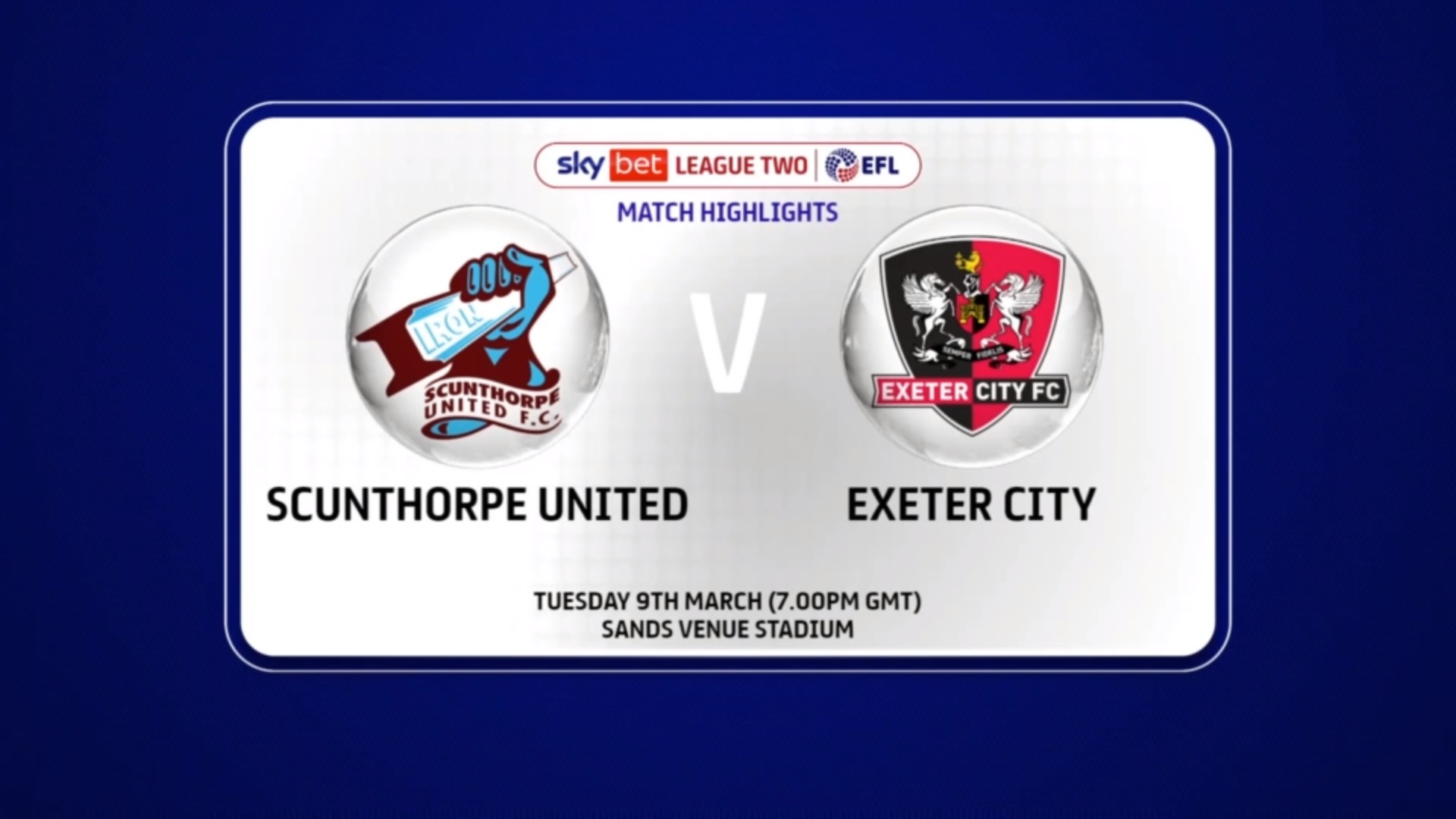 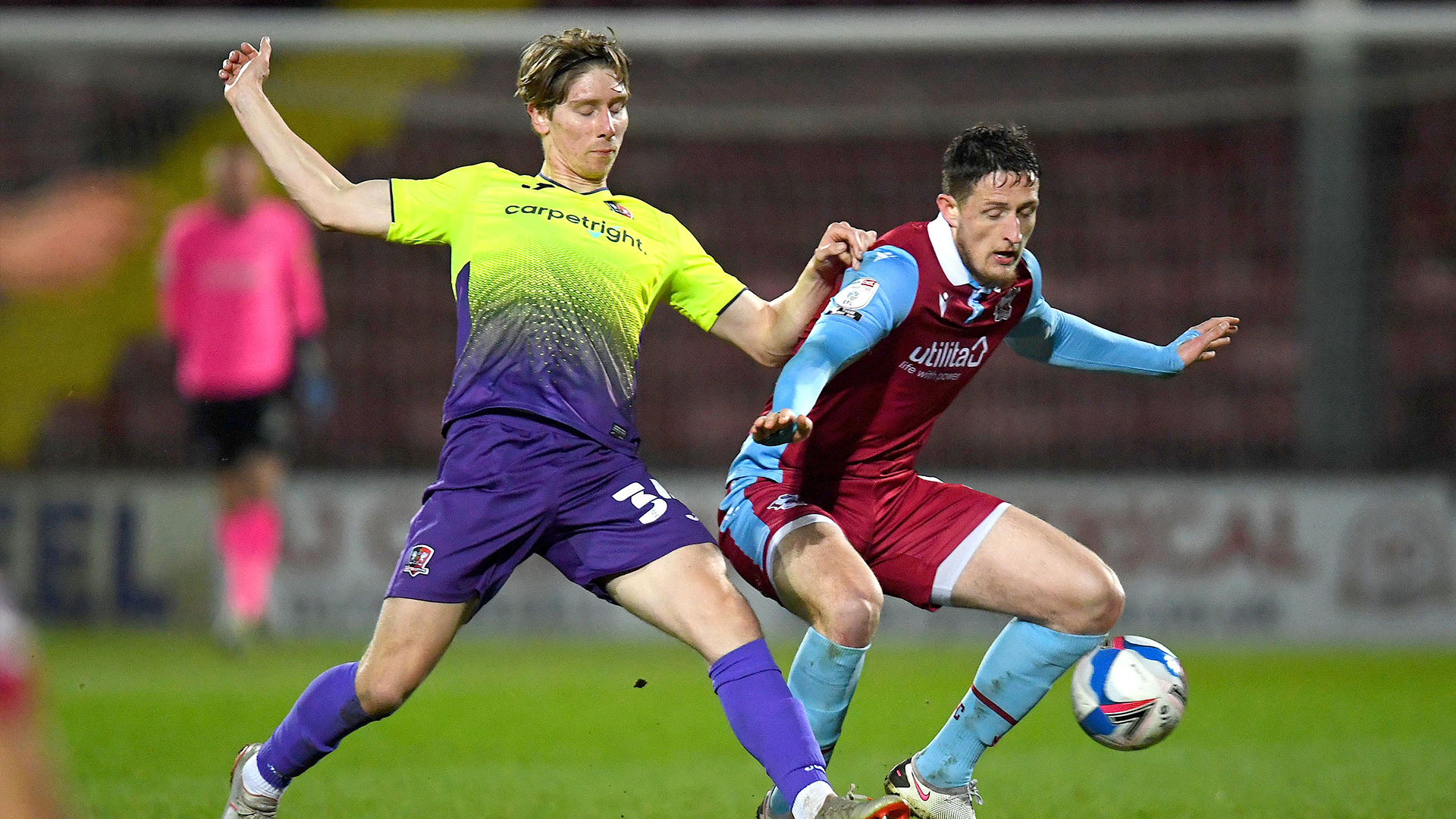