Exeter City make the mammoth trip to Cumbria to face Carlisle United on Saturday in a 3pm kick-off at Brunton Park.

The Grecians will be looking to solidify their place in the automatic promotion places on Saturday, and go into the match on the back of a six-match unbeaten run that has picked up fourteen points.

Carlisle head into the match on the back of a late 2-2 draw with high-flying Tranmere Rovers last time out, and are in good form, having won three of their last five matches to ease their relegation fears.

City will be in our red and white home strip for this fixture.

Exeter City manager Matt Taylor is expecting a tough clash when the Grecian make the 700-mile return journey to Brunton Park on Saturday.

The Grecians face a side that drew with high-flying Tranmere Rovers last Saturday and have picked up wins over promotion hopefulls Northampton Town and Bristol Rovers recently.

"They are one of the form teams and since the manager has taken over he has done a fantastic job," said Matt. "They were in a relegation battle at the time and to see that form turn around has been incredible and inspirational so full credit to Carlisle but we hope that form ends this week at the expense of ourselves.

"We generally play well when we go up there, the pitch suits us so we will have a good feeling about the environment."

City will once more be backed by an incredible support as over 350 tickets have already been sold for the mammoth journey, and Matt was full of praise for the travelling Grecians.

"It's incredible and has been throughout the season. We went to Barrow third game of the season having not won or scored yet, and they supported us really well on a windy, wet night.

"They make the journey and the sacrifices so much and we appreciate it and look forwad to seeing them on Saturday."

Tickets are on sale for City's trip to Brunton Park on Saturday to face Carlisle United.

The club had been sent an initial allocation of 304 tickets (inclduing 4 wheelchair tickets) in the Pioneer Food Stands Section 3. These sold and we were given an extra 111 tickets.

All tickets not collected at the club shop will be taken to Carlisle for collection at their ticket office.

Pay on the day is also available at an increased rate.

Tickets are also available on the day, but the prices rise by £3 on some age groups.

Tickets are now on sale at newtickets.ecfc.co.uk and can also be purched by calling 01392 411 243 or visiting the club shop at St James Park from 10am to 4pm (Monday to Friday).

Not heading to Carlisle this weekend? Fear not, get the next best thing and listen LIVE on iFollow!

By purchasing a match pass at the cost of just £2.50 you'll get access to the audio stream which includes the live BBC Radio Devon commentary. If you are overseas you can buy a video match pass!

A last gasp goal from Omari Patrick earned Carlisle a point away at Tranmere Rovers, who ended the match with 9-men...

Check out our handy guide for the trip to Carlisle, with travel information, what you can find at the ground and more. Click here to read. 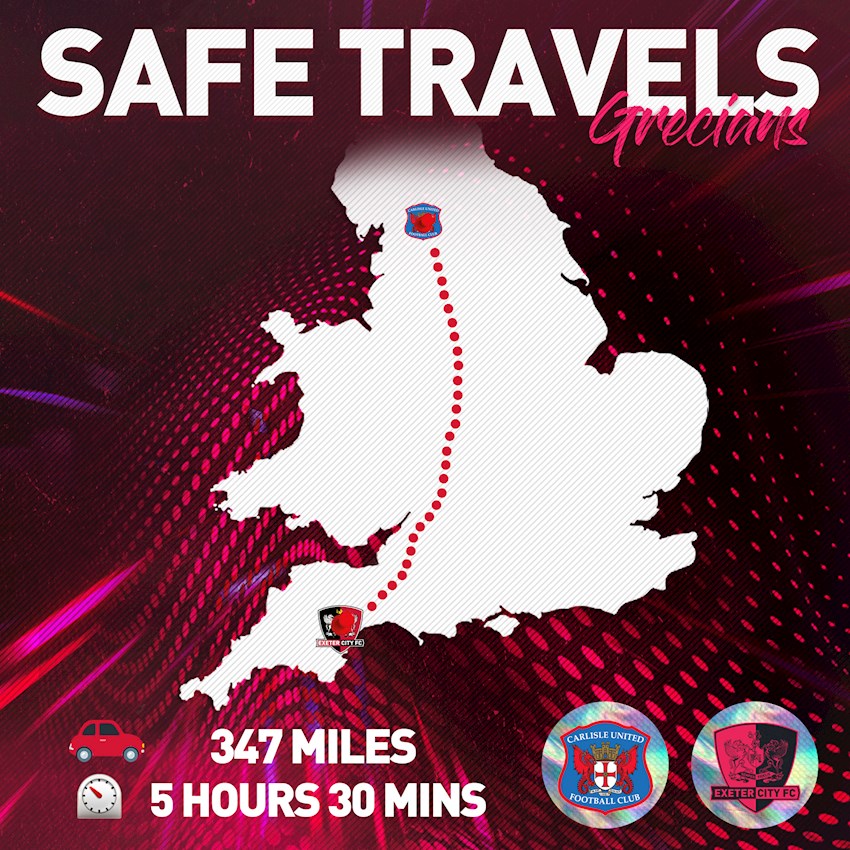 The distance between St James Park and Carlisle United is 347 miles and will take around five hours and 30 minutes.

City were dominant throughout but were unable to convert multiple chances with Offrande Zanzala and Tim Dieng troubling a busy Mark Howard in the Carlisle goal.

Carlisle rarely threatened though Cam Dawson was on hand to tip over a late chance for the hosts to keep his sixteenth clean sheet of the season.

Matt Jay was the only change to the team, with Callum Rowe making way for the skipper, following an impressive run of starts for the Grecians since his return from Bath City.

An early chance fell for Zanzala in the opening three minutes with Jay threading a ball through towards the target man who was unable to poke the ball past Howard in the Carlisle goal.

It was a lively start to proceedings for City who were looking to reward the travelling Grecians with speculative shots from Pierce Sweeney and Tim Dieng to round off the first ten minutes.

Looking to make it a memorable 30th birthday, Dieng narrowly missed the target following a Jevani Brown corner with a shot rolling wide of the left post in the 11th minute.

The chances kept falling for City with multiple balls into the box towards Zanzala. Crosses from wide men Jack Sparkes and Josh Key narrowly missed the stretching efforts of Oz.

It looked as if City were destined to take the lead 25th following a quick break from the half-way line. Some impressive play from Jay down the right-hand side found Key, whose intelligent ball found Jevani in space inside the box, but a sloppy touch from the striker provided relief for Carlisle who dealt with the danger.

The first piece of work for Cam Dawson came in the 31st minute as the hosts looked to make their first attack of the match. Striker Omari Patrick snuck a shot on target following some quick passing around the edge of the Grecian box, but the shot landing into the hands of a grateful Dawson.

But minutes later City found themselves back on top, as MJ took on an ambitious shot from outside the box, but frustratingly for the Grecians, a stretching Howard was able to push the ball wide of the left post.

Another massive chance came and went for City as the resulting corner found the head of Dieng. The Frenchman’s bullet header was saved once again by Howard, as the keeper continued to keep his team in the first-half.

As half-time approached, the 43rd minute saw some patient play inside the Carlisle half result in a Josh Key cross. The defender dinked the ball in the direction of the back-right post, but just past Oz who was unable to stretch his head onto the ball.

The positive momentum stayed with City at the start of the second period, as some clever play from MJ moved the ball into the path of Dieng. The Frenchman unleashed a shot from inside the box but a wonderful save from Howard once again denied Tim.

The following ten minutes saw little between the two teams, as the City faithful continued to support the Grecians.

The 67th minute saw City continued to battle, Brown played a delicate ball through the hosts back-line towards the overlapping Key, but the wide-man’s dangerous ball struggled to find a teammate.

Following a surprising decision, Carlisle were awarded a free-kick in the 72nd minute. A searching ball from the right was aimed towards the back-post, but City headed the ball out for a corner.

The corner found the head of Mitch Roberts, but an impressive save from Cam tipped the ball over the bar.

Despite a slight shift in momentum, the 77th minute saw City break from the half-way line with Jevani playing substitute Josh Coley through on goal, but a stumble from the attacker finished the move abruptly.

After a quiet spell of play, City finally broke the deadlock on the 88th minute. An Archie Collins corner was directed towards the back post of Dieng. The Frenchman’s cushioned header found substitute Podge Amond who was able to klick the ball past the helpless Howard into the bottom-right corner.

City continued to hold out in the closing minutes, resulting in determined win at Brunton Park.

Tickets are on sale for City's trip to Brunton Park on Saturday to face Carlisle United.

The club had been sent an initial allocation of 304 tickets (inclduing 4 wheelchair tickets) in the Pioneer Food Stands Section 3. These sold and we were given an extra 111 tickets.

All tickets not collected at the club shop will be taken to Carlisle for collection at their ticket office.

Pay on the day is also available at an increased rate.

Tickets are also available on the day, but the prices rise by £3 on some age groups.

Carlisle operate a scan entry system in to Brunton Park. Supporters need to show their ticket upon entry to a steward at the turnstle who will scan them into the stadium. Turnstiles open at 1:30pm for a Saturday fixture.

Tickets are now on sale at newtickets.ecfc.co.uk and can also be purched by calling 01392 411 243 or visiting the club shop at St James Park from 10am to 4pm (Monday to Friday).

Grecian Travel, completely run by the Supporters' Club, and not for profit, will be available for City's trip to Carlisle United. 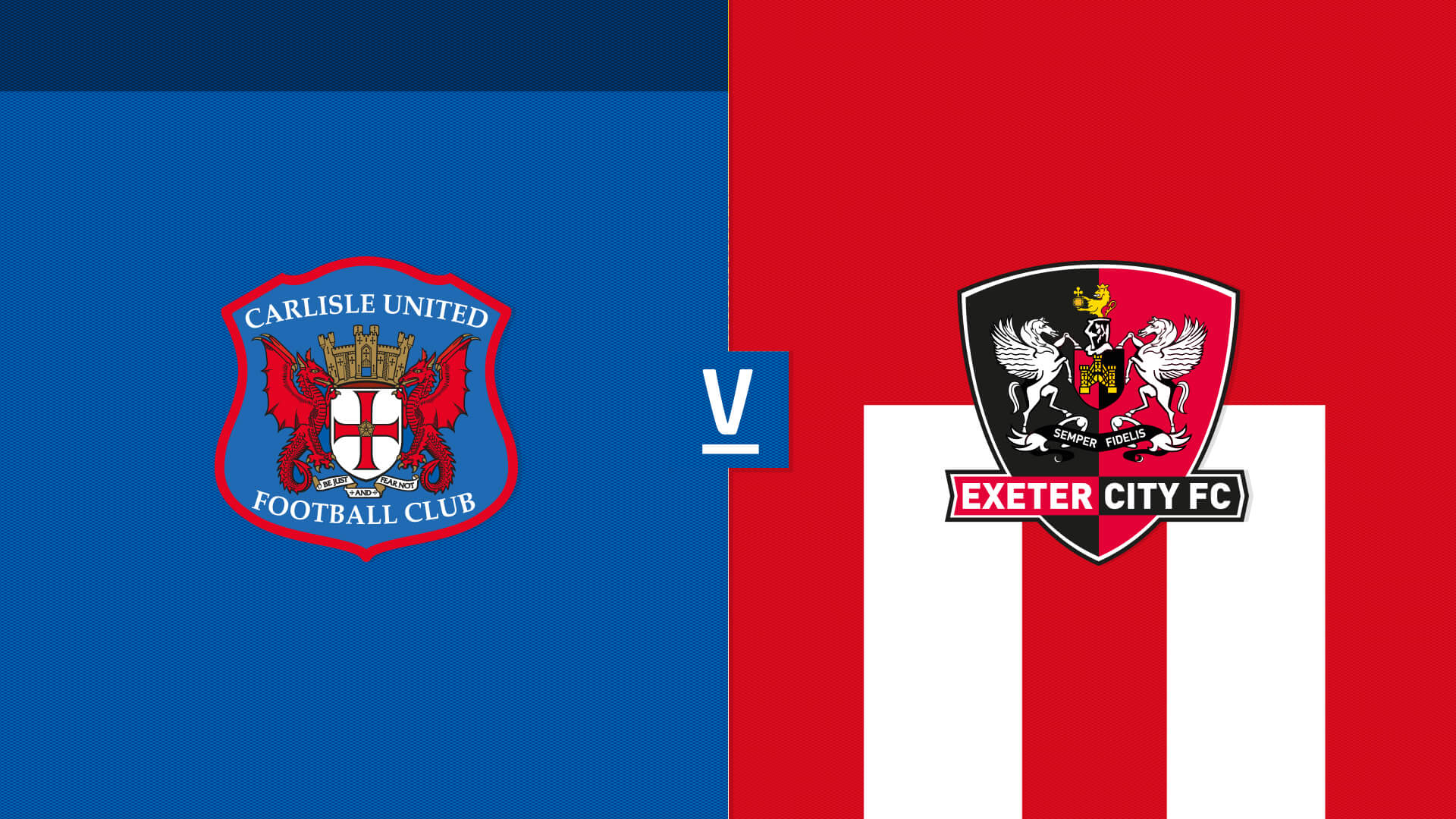 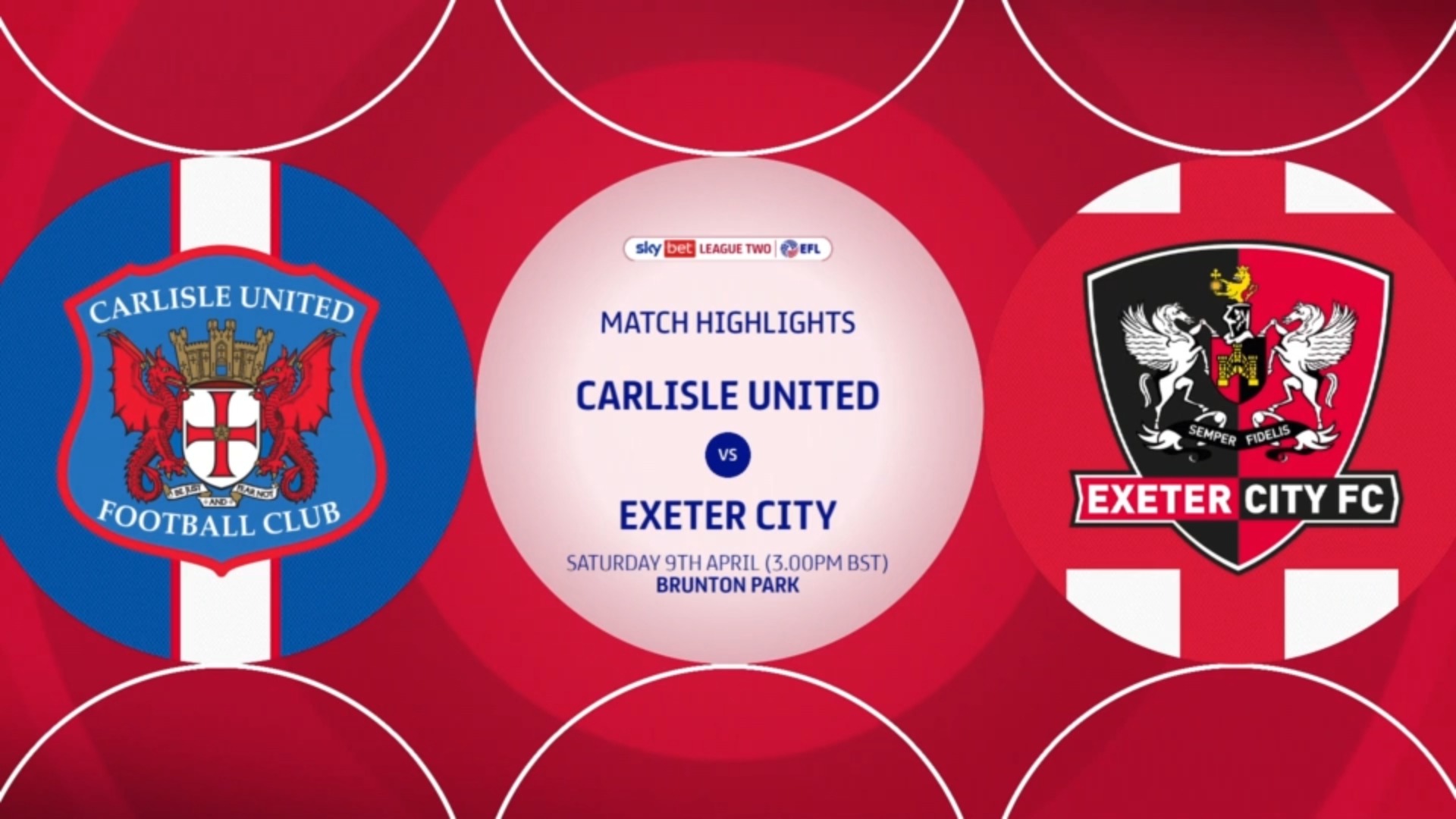 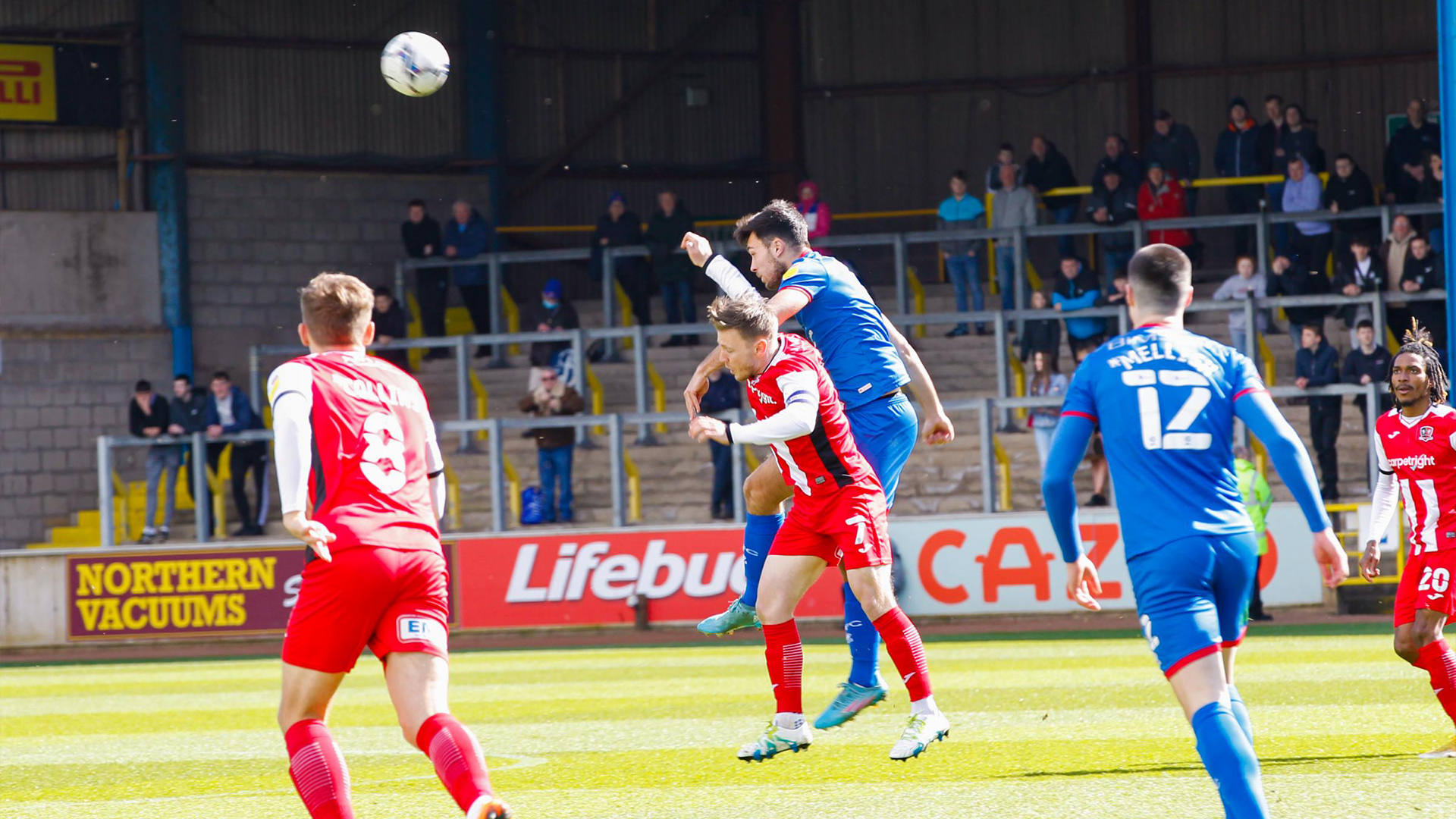