Come down from Tuesday night yet? Still partying? Well, you better had, as City still have two games left before we wave goodbye to Sky Bet League Two, starting with a trip to Northampton Town on Saturday.

The Cobblers currently sit in third in the table and have promotion aspirations themselves, while the Grecians now have their eyes on the title after cutting Forest Green Rovers' lead at the top to goal difference alone. Northampton were 4-2 winners away at Leyton Orient on Saturday, a result which helped deny City's hopes of going up that day, and are in prime position for the final automatic promotion place.

Following an unforgettable promotion to League One on Tuesday night, City head to Sixfields to face a side hoping to join us in the third tier next season.

"It's a sell out and a huge game of football. We go there with confidence and in good spirits and we give respect to the opposition," Matt said.

"I'll be making sure my players are fully focused on the task at hand. This is another opportunity. It's all to play for and it's right in front of us."

We have sold out total allocation of over 1500 tickets for the South and East Stands at Sixfields. Thank you for your incredible support.

There will be no tickets available on the day.

A message from Northampton Town:

"Everyone at Northampton Town Football Club offers our warmest congratulations to all at Exeter City on your promotion to Sky Bet League One and we are looking forward to welcoming you to Sixfields on Saturday.

Sixfields is sold out for this game, and allocated seating applies in all areas, so we do need all supporters to please sit in the stand, row and seat number shown on your match ticket. Stewards will be on hand to help and guide you to the right place!

By sitting in the correct seat, you will be helping us help you and your fellow supporters have the most enjoyable experience possible when visiting Sixfields.

Thank you for your co-operation, have a safe journey and congratulations again on your promotion!"

Grecian Travel, completely run by the Supporters' Club, and not for profit, is available for City's trip to Northampton Town.

For more information or to book please contact John Bishop on 07904 036334 or by email at: john.bishop760@btinternet.com

Not heading to Northampton this weekend? Fear not, get the next best thing and listen LIVE on iFollow! 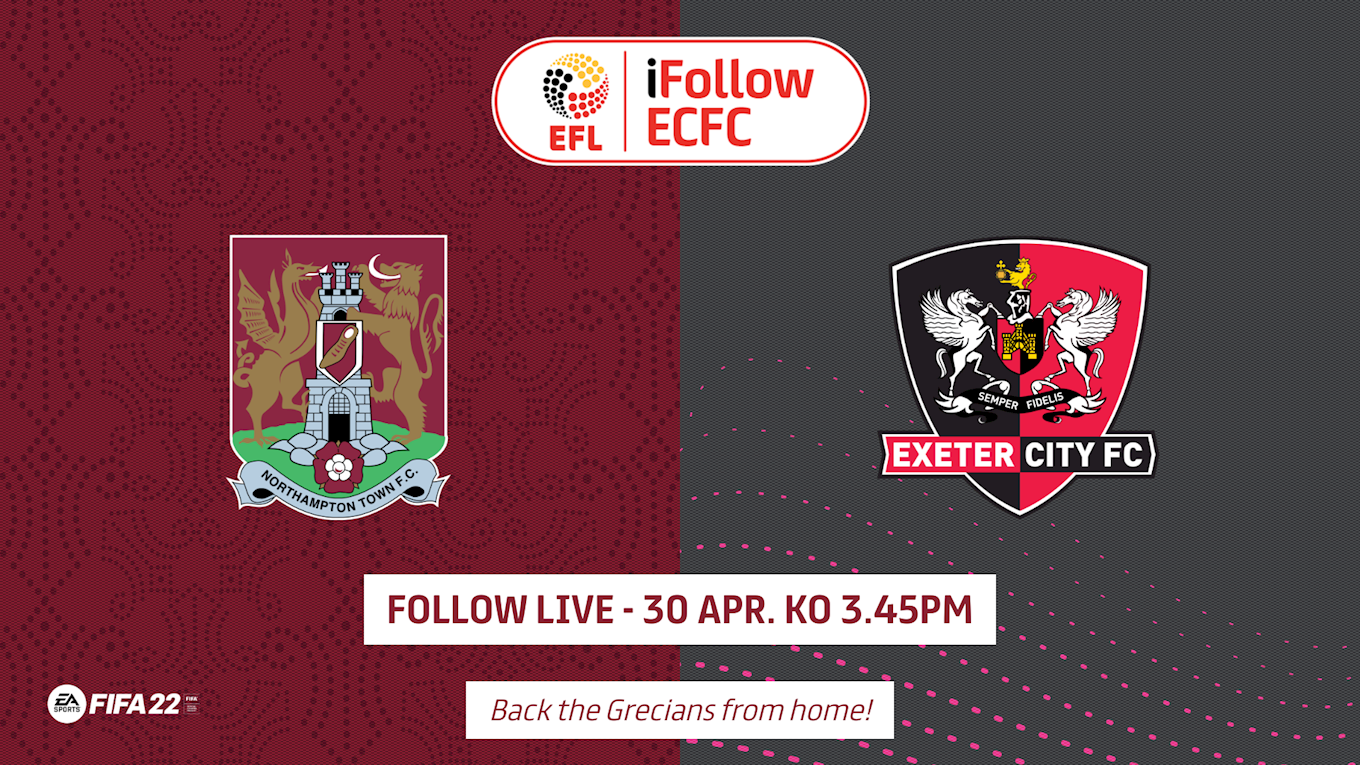 An entertaining away encounter saw City head top of the league thanks to a second half equaliser from substitute Sam Nombe.

Despite some promising chances for City, the defining moment of the first half came in the 29th minute as Mitchell Pinnock opened the scoring for the Cobblers. The midfielder produced a beautiful finish into the bottom left corner from just outside the right of the box following a quick throw-in.

The second period continued in dramatic fashion, with an energetic Northampton looking to grab a second. Following a disallowed goal for the opponents, City quickly broke down the left with Jake Caprice finding Sam Nombe in the box. A deft flick from the super sub creeped past the gloves of The Cobblers keeper to take City level.

Northampton continued to press the City back line, but a resilient City performance secured the point and took the Grecians top of the league for the first time this season.

Matt Taylor decided to bring the experience of Jonathon Grounds into the starting eleven with Sam Stubbs missing out as a precaution. Promising academy products Harry Kite and Alfie Pond were given a spot on the bench for the Grecians.

Changing to the blue strip for the visit to the Sixfields Stadium, City had to deal with a lively end to end opening ten minutes which featured two corners in the opening three minutes for newly promoted Grecians.

The eight-minute saw Josh Eppiah through on goal, following a ball through the Grecians back line from Louis Appéré. However, Cam Dawson continued his good form to produce a great save low to the left post.

As the game looked to settle down, City were able to break down the right side in the 17th minute thanks to a superb ball from Tim Dieng. The Frenchman’s lofted pass found Josh Key who played an intricate ball back to Matt Jay but unfortunately for City, the skipper was only able to find the gloves of Liam Roberts.

Following a stoppage in play, The Cobblers looked to change the momentum which was edging towards City. In the 29th minute, Northampton were awarded a throw in on the right, deep into the City half. The ball was given quickly to midfielder Mitchell Pinnock who was able to cleverly draw in Jay and dink the ball over the skipper, producing an impressive finish into the bottom left corner from the right edge of the box.

Despite the setback, it didn’t deter the Grecians as they continued to persevere attacking the Cobblers goal. Ten minutes following the hosts goal, Oz Zanzala was able to wriggle into the box and play a high ball across the box which ultimately fell to a Northampton defender, preventing a tap in for City.

Just one minute into the second half, saw a Grecian free kick from the left drop to the in-form Dieng. The midfielder tried to tap the ball past Roberts from close range, but the opposition keeper produced a great save to claw it away from danger, denying a great chance for City.

The lively nature of the match continued as Eppiah used his speed to get past Cheick Diabate, but a great challenge inside the box from Jonathon Grounds denied the quick striker from getting a shot on target.

The 60th minute saw The Cobblers with a glorious chance to put the match the bed. A ball was squared to Appéré with heaps of space inside the box. A one on one with Dawson was wasted as the shot stopper produced a vital save from six yards out.

Following a disallowed goal for Northampton in the 70th minute, City looked to break quickly down the left. Substitute Jake Caprice, produced a turn of speed to get past his opponent and produce a great ball into the near post towards fellow Sam Nombe. The fellow sub was able to produce a clever backheeled flick in little space to get the ball past the gloves of Roberts and level the game, resulting a jubilation from the away end.

The goal seemed to change the entire mood around Sixfields Stadium, as City were now fighting to take home all three points. Ten minutes later, another break into the hosts half saw Caprice with space to produce a ball with Coley in a promising position but a disappointing ball only found the gloves of Roberts.

Feeling the effects from the pivotal encounter on Tuesday night, the City back line seemed to be tiring as the hosts looked to take advantage. Multiple threatening efforts from the Cobblers put pressure on the exhausted Grecian eleven with a corner in the last minute. Another shot on target for the hosts was cleared by Sam Nombe off the line to hold out for a point in an entertaining away encounter.

CIty's trip to face Northampton Town on Saturday, April 30 in a 3pm kick-off is now SOLD OUT!

We have sold out total allocation of 1141 tickets for the South Stand. Thank you for your incredible support 👏

Ticket Prices are as follows:

Grecian Travel, completely run by the Supporters' Club, and not for profit, is available for City's trip to Northampton Town. 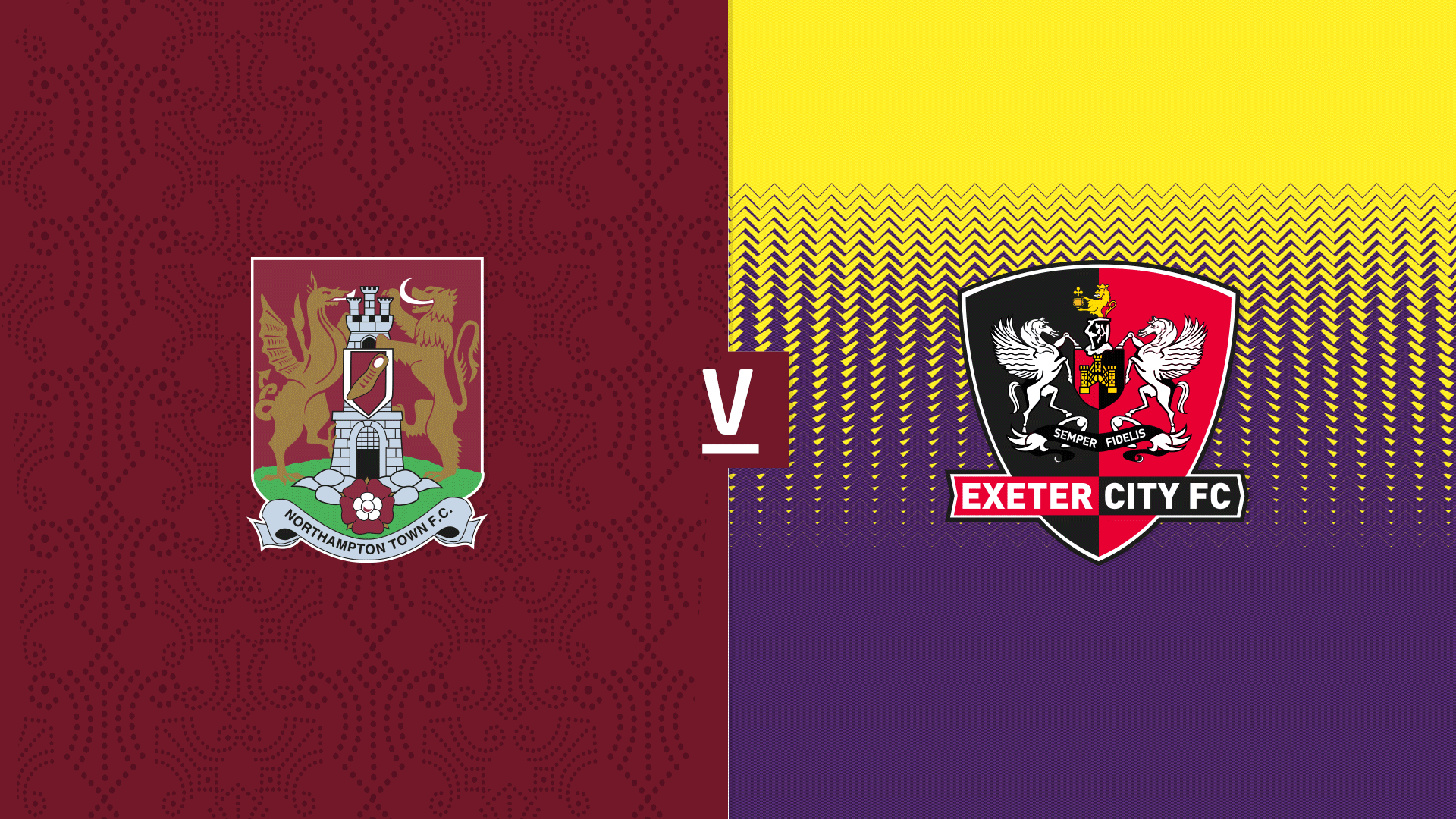 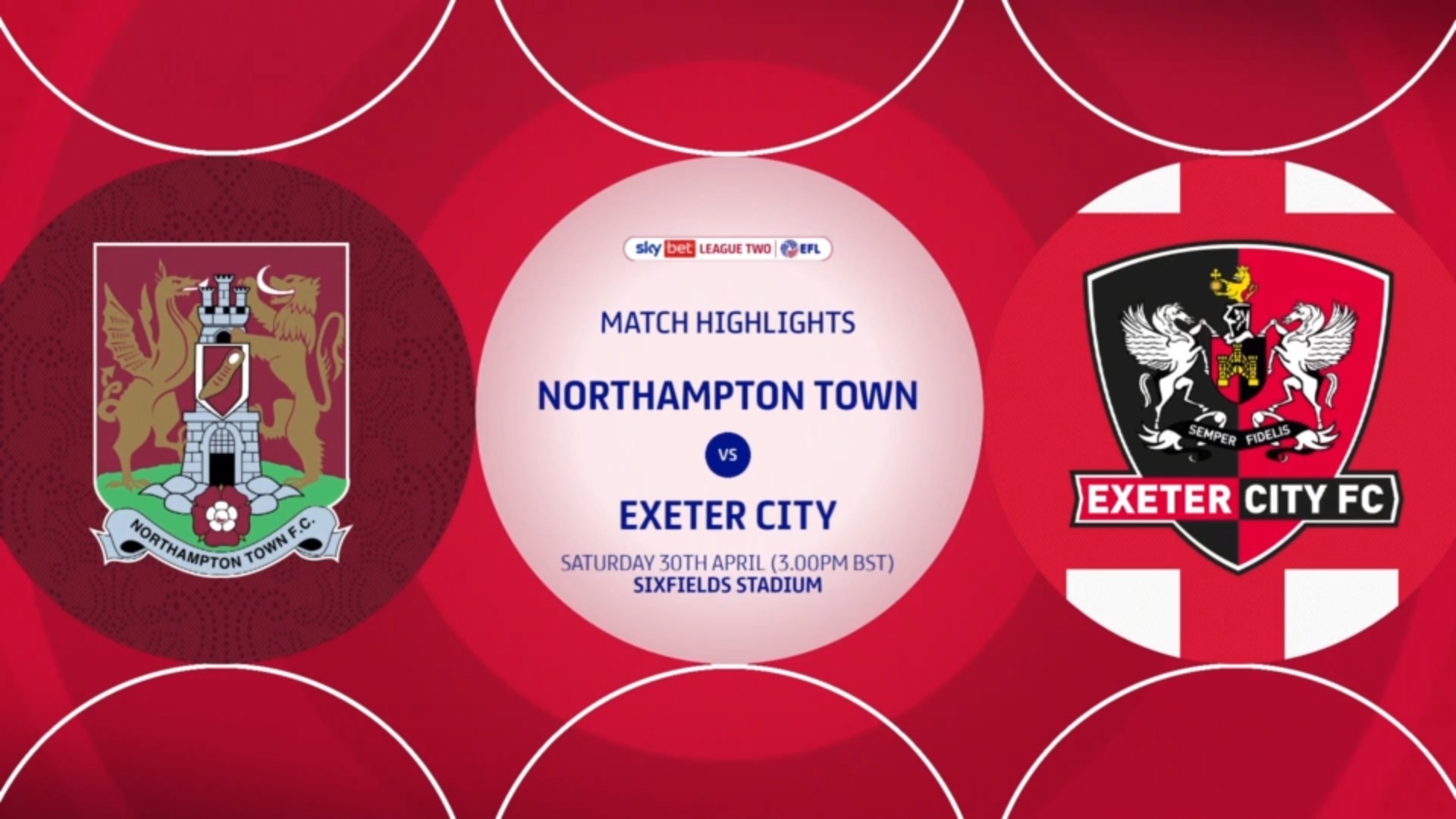 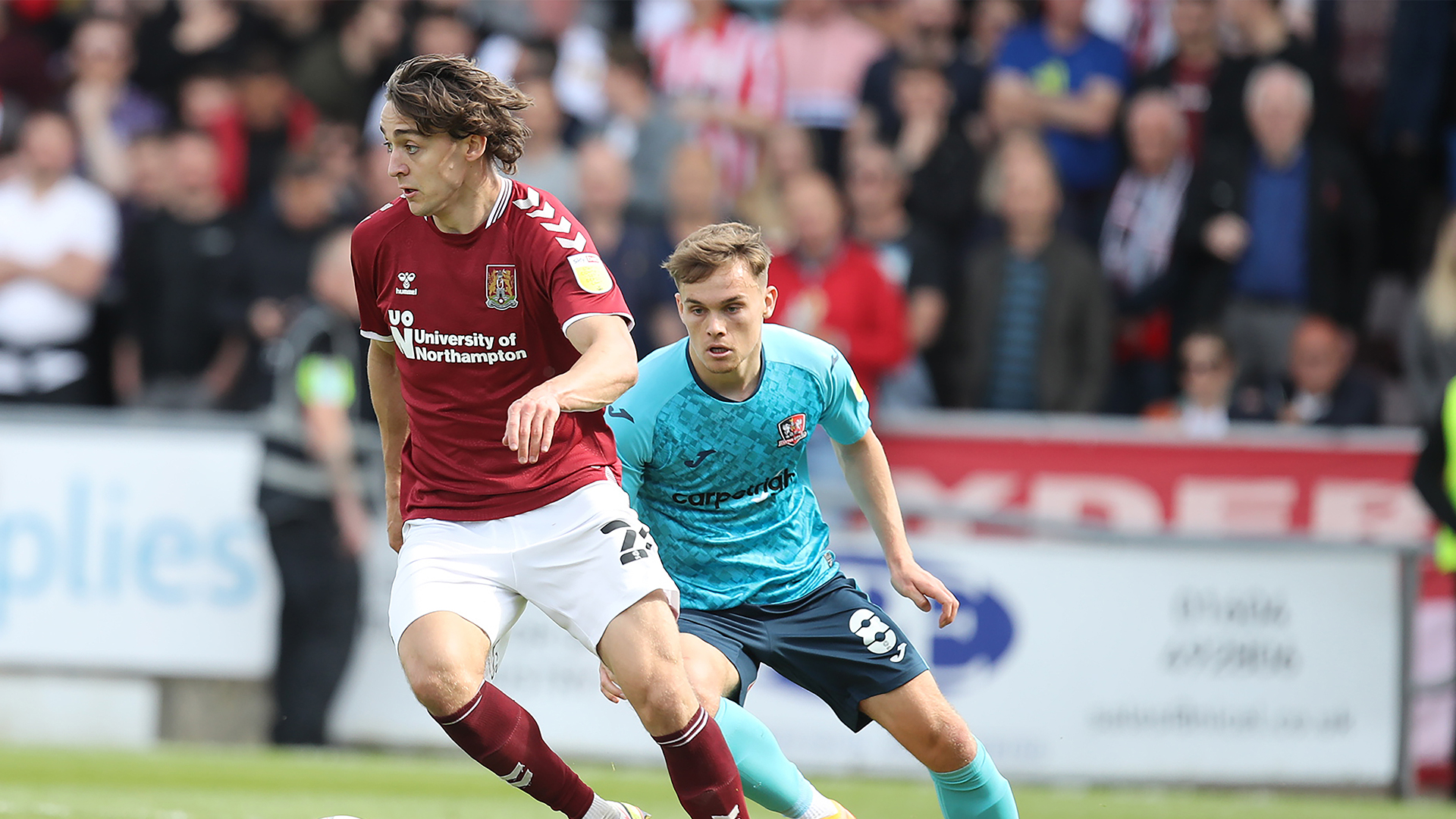