A tricky encounter against unbeaten Harrogate Town is Exeter City’s next challenge on Saturday afternoon.

The high-flying Sulphurites have been strong across the pitch so far, but Jed Penberthy picks out three of dangermen hoping to continue their early season form against the Grecians. A wonderful start to the season has seen the former Middlesbrough and Salford City striker quickly get off the mark for his new team. Three goals in as many games for Town has helped his side maintain this unbeaten stat to only their second EFL campaign. His senior career began in Scotland with Cowdenbeath before making the trip back over the border to seasoned FA-Cup giant killers, Blyth Spartans. Good form in the North East meant a move back to boyhood club Middlesbrough was on the cards. Loan spells at Gateshead and Accrington disrupted his time at the Riverside prior to a permanent move to Salford City.

After a loan spell with Hartlepool United, where he scored in the National League play-off final against Torquay this summer, Luke Armstrong switched allegiances to Wetherby Road and has hit the ground running, helped with a brace on Tuesday night against Leyton Orient.

Another Boro youngster, Pattison too is spearheading the Sulphurites to success in the early stages of the season. Three goals for the central midfielder joint-leads Harrogate’s charts. 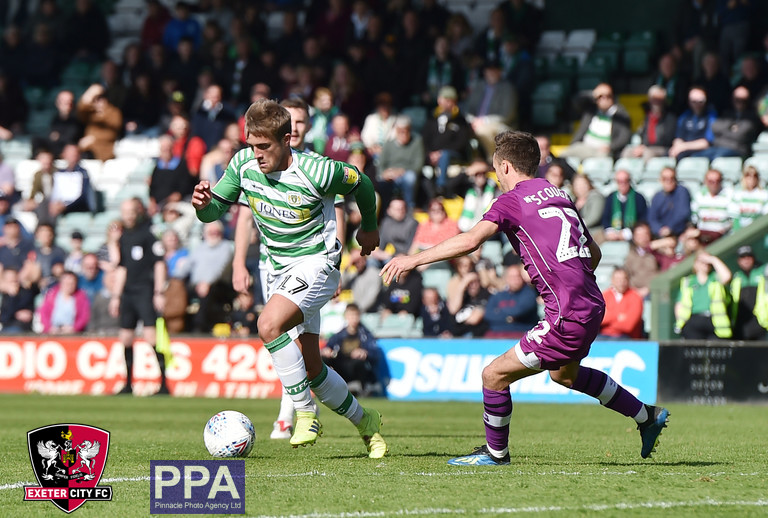 Born in Darlington, Pattison came up through the ranks on Teeside but could only muster a couple of EFL Trophy games for the Reds. Eventful loan spells at York and Yeovil earned him a move to Wycombe Wanderers. After helping the Chairboys to Championship promotion, six appearances in the second tier weren’t enough to keep a contract in Buckinghamshire and Pattison moved back to his native northern roots.

Firing on all cylinders again, Pattison is continuing to turn heads, and defenders, of other clubs and if he and Harrogate can continue to perform, another promotion might be on the cards for the 23-year-old.

Ten-man Exeter City valiantly fought for an entertaining draw away to Harrogate Town.

Harry Kite correctly saw red for his second bookable offence in the process, though some may believe his foul was outside the penalty area.

Alex Hartridge and Muldoon both had chances to nick the victory with seconds left but honours stayed even at the EnviroVent Stadium.

The manager opted for an unchanged league line-up who brushed aside Bristol Rovers last Saturday.  Former Grecians Lewis Page and Rory McArdle both started for the Sulphurites.

City sprung out the traps and almost took an early lead. Jevani Brown forced a second minute corner, which he delivered to the far post. Pierce Sweeney kept the ball alive and Josh Key swivelled and struck at goal, but Town keeper Mark Oxley was equal to it.

The home went closest on nine minutes. Jack Muldoon done well to recycle the ball high-up in the City half. His cross-box pass found free-scoring Alex Pattison who tried his luck from range. Bar a deflection Pattison may have been in the money.

Padraig Amond was inches from flicking Exeter in front on the 15-minute mark. The striker caressed Alex Hartridge’s ball toward goal with his head, though Oxley comfortably saw it wide.

Mid-way through the first half Harrogate had a decent opportunity to break the deadlock. Harry Kite was adjudged to foul Pattison around 25-yards out and earned himself a yellow card. George Thomson stepped up for the Yellows but sent his effort straight down Cameron Dawson’s throat.

Tim Dieng came close on 30 minutes. Fluid one-touch football saw Jevani Brown’s deft backheel find Amond in the box. The Irishman’s dink into the middle was met by Dieng, but his contact was lacking.

With the Grecians in the ascendency, Josh Key’s cross was begging for a City end-product and Alex Hartridge did get on the end of a wicked Jevani Brown free-kick, but Oxley was again the villain.

With two minutes to go until the break, Harrogate Town were gifted a chance from 12 yards.

Harry Kite went to ground suspiciously outside the box fouling Pattison, but ref Seb Stockbridge pointed to the spot. It was double punishment for City as Kite was given his marching orders. Jack Muldoon took the opportunity and stroked the ball beyond Dawson.

The Devon side were not to be deterred and Podge Amond went close in added time. A deep free kick from Sweeney was retrieved by Hartridge at the far stick. His delivery found Amond rising highest, but Oxley got across well to deny the striker’s first goal for Exeter. After a good start to the second half from the Grecians, Harrogate sought to make the extra man count. Alex Pattison drove through the open City midfield and played Page out left. The full back’s cross troubled the Exeter defence but eventually the ball was swept away.

With the Sulphurites gaining dominance, Matt Taylor turned to the bench. Tim Dieng and Padraig Amond were withdrawn and Sam Nombe and Owura Edwards entered the fray.

Cameron Dawson kept City in the game. A misplaced throw allowed Mulddon to stroll through the centre and lay the ball wide to Thomson. Fortunately for the Grecians, Dawson got down well and diverted the ball for a corner.

Jake Caprice had Exeter’s first meaningful effort of the second half. Edwards retrieved the ball in midfield and spread the ball out to the left-back. Cap cut onto his stronger right foot and fired comfortably over.

Against the odds it was the glorious Grecians who found themselves level with 11 minutes to play!

Wonderful play down the right-hand side saw Nombe get free on the wing. The striker drove into the box and pulled back for Josh Key. He had two bites at the cherry but the second was smashed past Oxley to bring City on par. 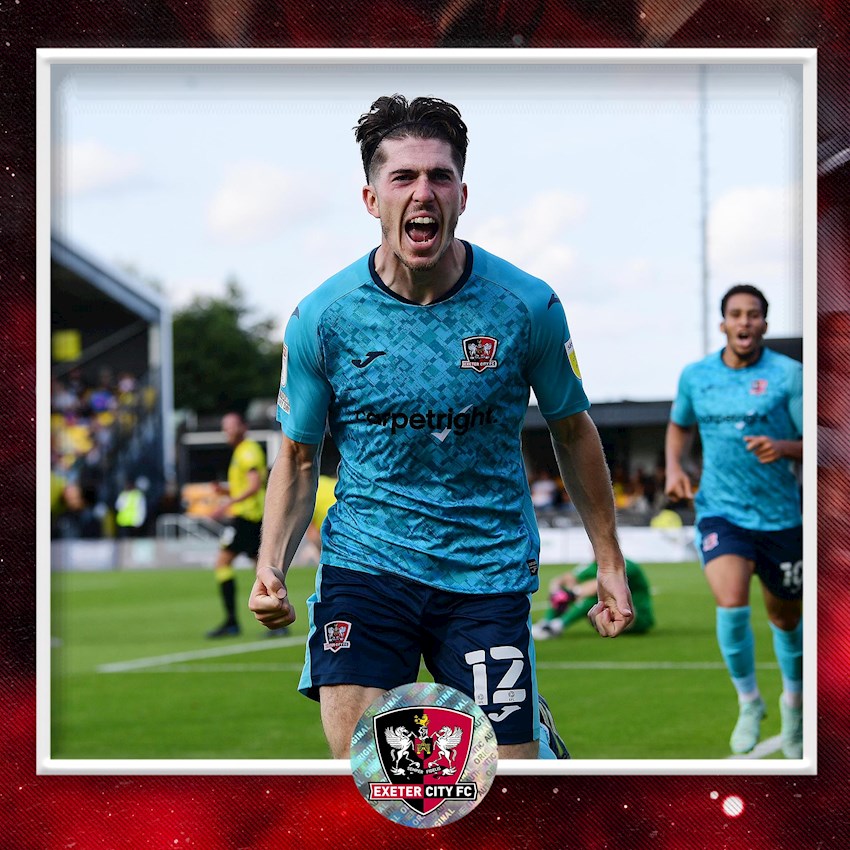 With their tails up, City pressed again. Edwards’ tenacity won the ball in the final third and he played it to Brown. Nombe couldn’t quite reach Brown’s cross. Up the other end Luke Armstrong jinked his way through, but Dawson was sturdy again.

With two minutes to go Exeter almost snatched the winner. Owura Edwards toyed with his oppodsing full back and delivered a great ball into the middle. Hartridge put everything behind the header but it flew narrowly wide.

Jack Muldoon almost stole the game for the home side in the dying embers. Pattison tested Dawson’s gloves from range and the man who separated the sides last season fired wide on this occasion.

After the hearts settled in all four corners of the EnviroVent Stadium referee Stockbridge brought the pulsating game to a close.

Exeter look forward to a rare week off and are next in action against Forest Green Rovers next Saturday. 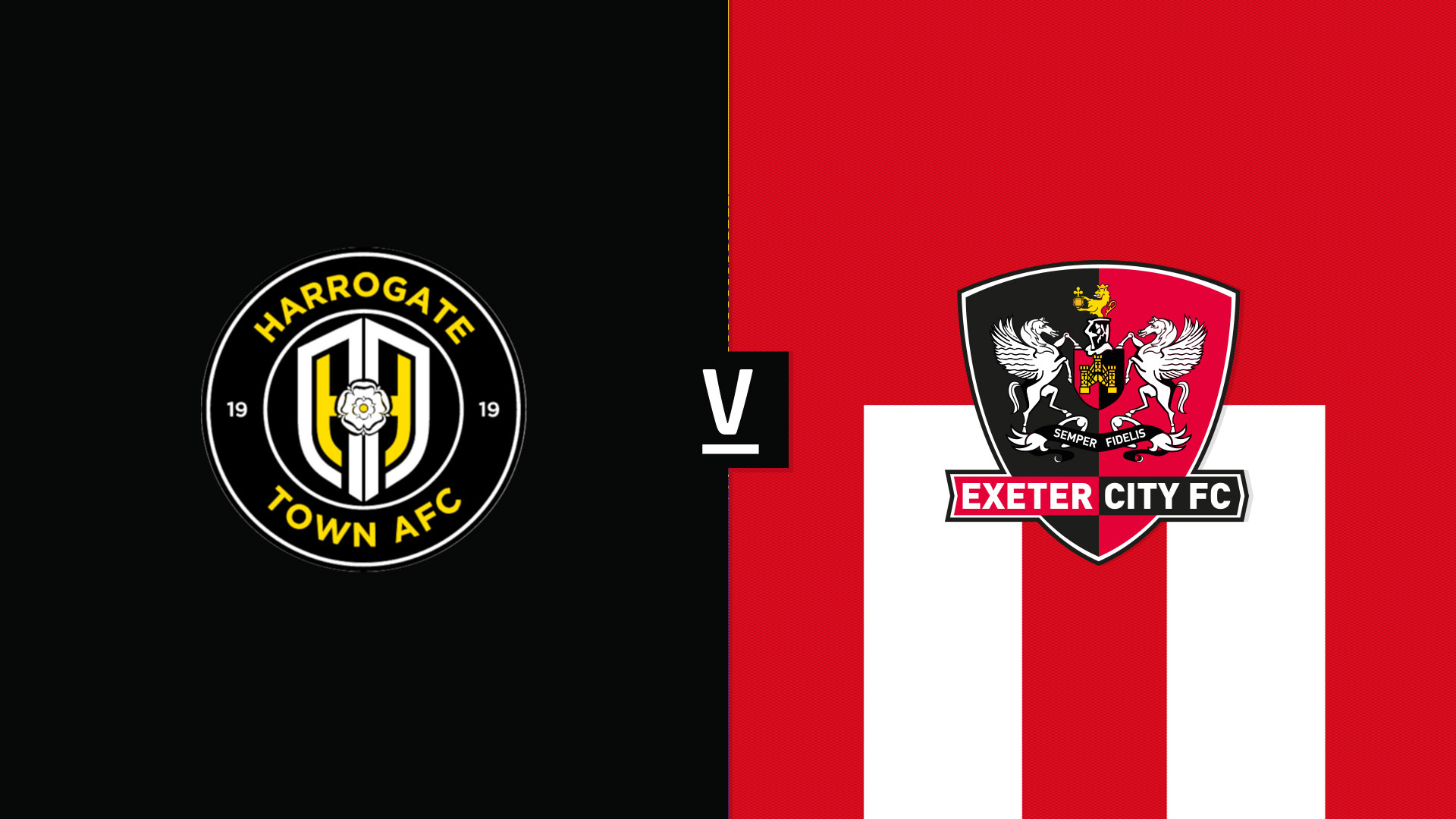 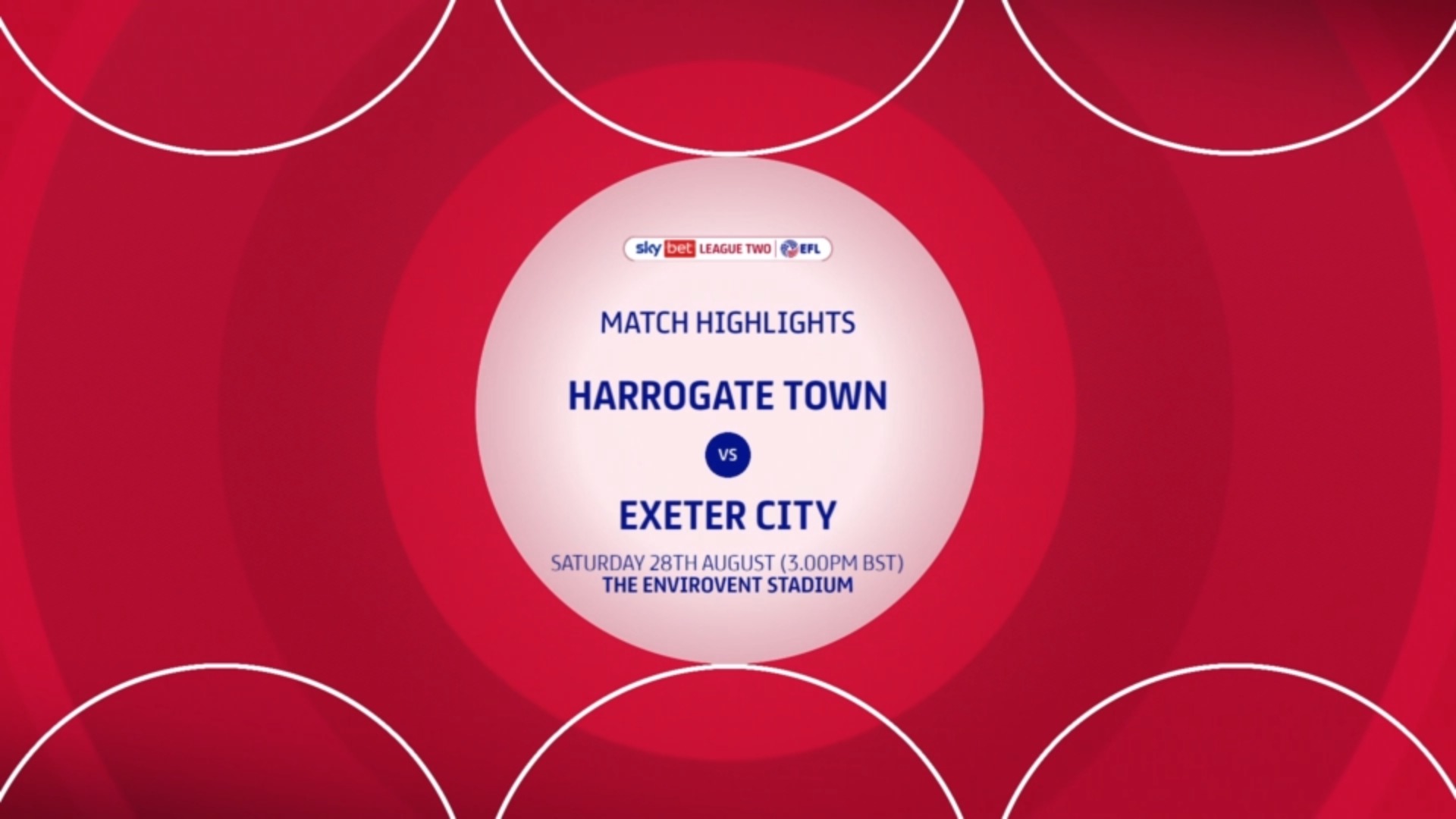 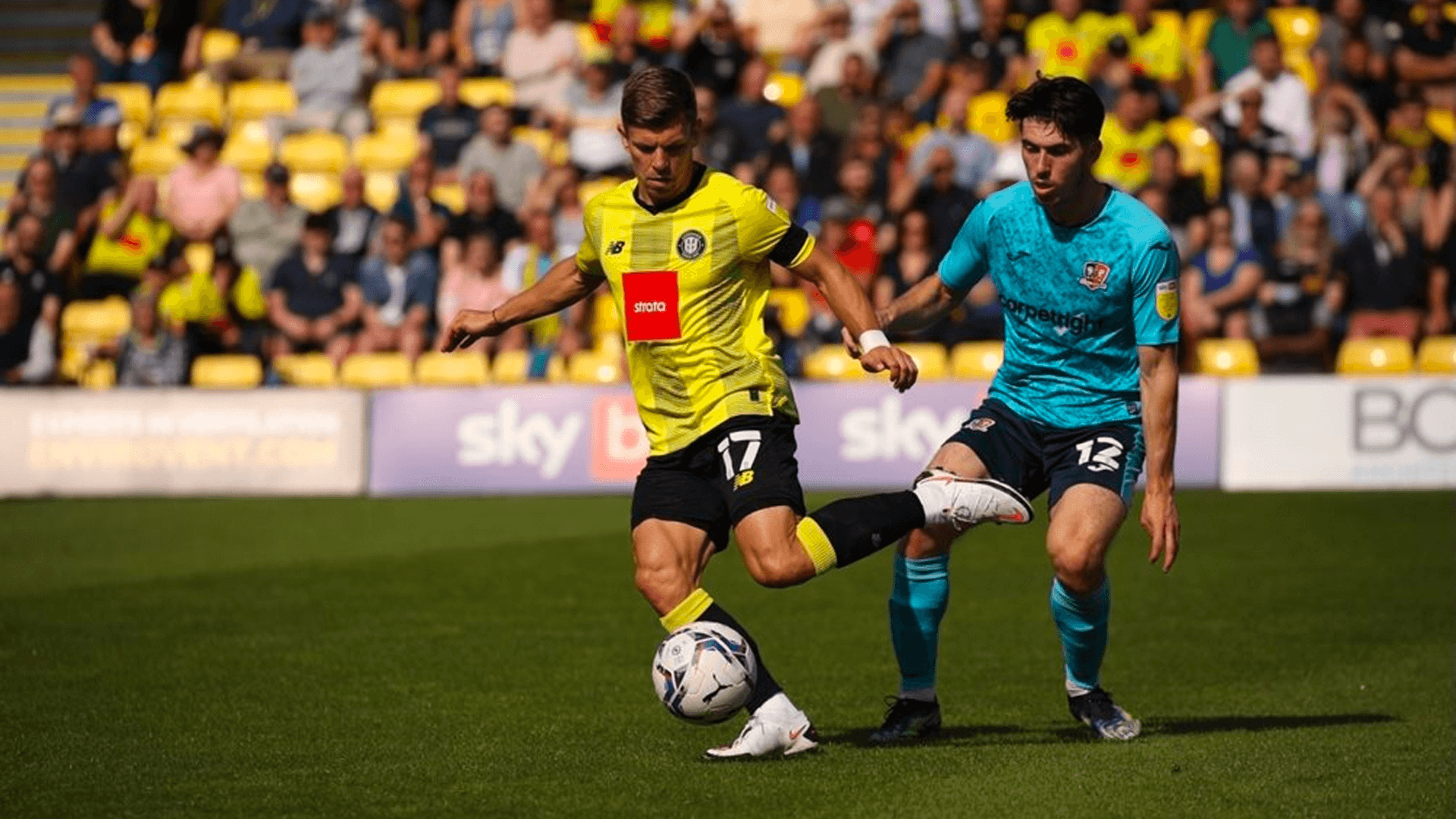