Exeter City are on the road this weekend as we make the relatively short trip to the top of the M5 to take on Walsall at the Bank's Stadium.

"The Matt Taylor Derby" as it has been coined by the media, owing to the manager of Walsall sharing his name with our own Matt Taylor, will be City's third league away game of the 2022, with the Grecians looking to build on last Saturday's 2-0 win over Scunthorpe United.

The Saddlers were beaten 2-0 away by in-form Mansfield on the same afternoon, but will have home advantage this time round at a ground where City have historically found it tough.

City will be wearing our turquoise/blue third strip for Saturday's match.

(Our) Matt Taylor has given his thoughts for City's trip to the Banks's Stadium.

"Last weekend was a pleasing result and we look forward to this weekend."

"We have looked at a lot of video footage this weekend to prepare the players and they have got a spring in their step.

"Walsall is always a ground that our supporters travel well to and I look forward to seeing them all there."

We have been allocated 514 tickets for this fixture and the prices are as follows:

Ticket prices rise by £2 when bought on the day.

Disabled supporters are charge at full price for their age category and are entitled to bring a carer free of charge.

Grecian Travel, completely run by the Supporters' Club, and not for profit, is available for City's trip to Walsall. 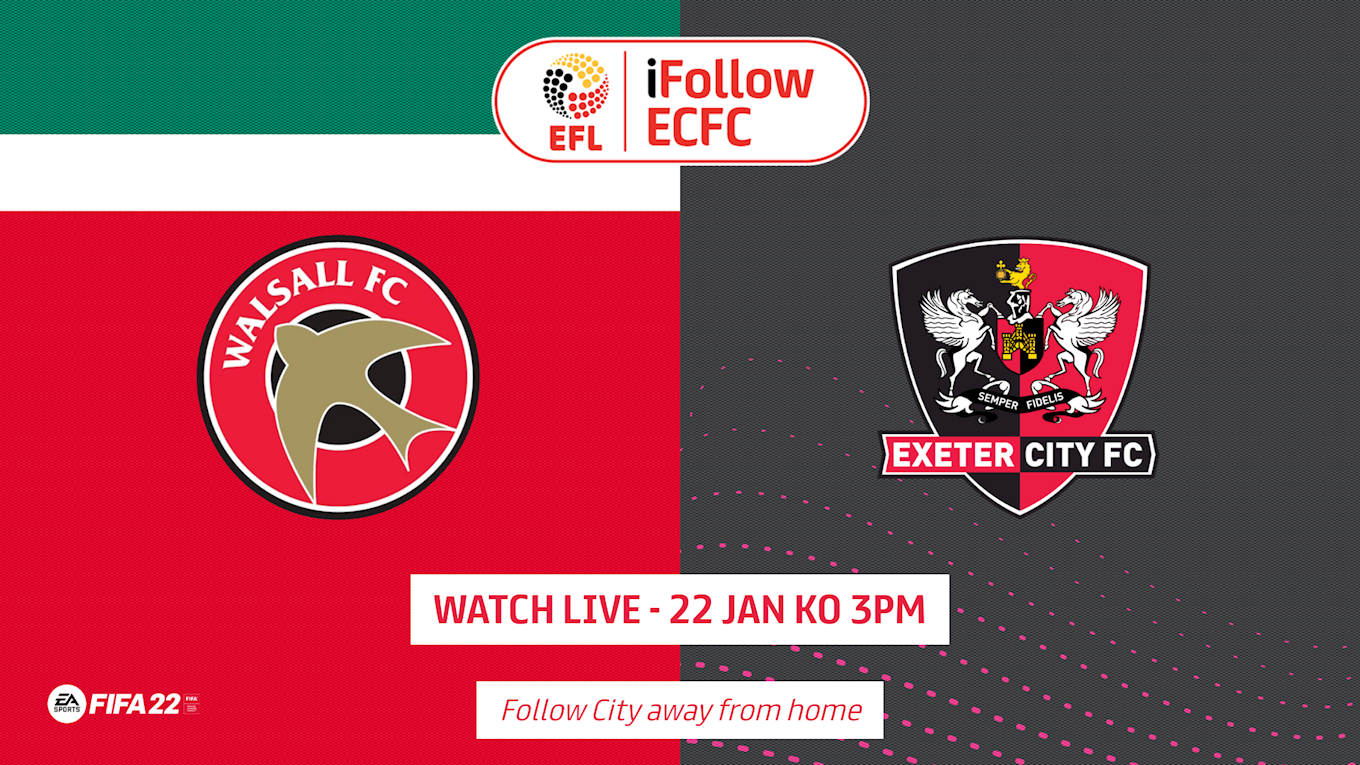 Tim Dieng and Sam Nombe were on the scoresheet as the Saddlers stole a draw at the Park.

Two identical headers in each half were enough for an emphatic City victory against ten-man Walsall at the Banks’s Stadium.

Archie repeated his contribution on 83 minutes as Cheick Diabate this time profited, scoring his first goal for the club.

Rollin Menayesee saw red mid-way through the second period on a day to forget for the Saddlers.

After last week’s victory over Scunthorpe, Matt Taylor saw no need to change the starting XI as Jonathan Grounds returned to the bench.

City could have, and maybe should have, found themselves ahead inside eight minutes. Josh Key sent a dangerous fizzing ball across the box, on a sixpence for Oz Zanzala. The striker done everything right with the header, but keeper Carl Rushworth miraculously kept it out not once, but somehow twice. Some of the best goalkeeping this division has seen.

Rushworth again was the villain in the next attack. Matt Jay broke free on the edge of the box and unleashed a left foot effort low. The Saddlers stopper was quick to get down and divert for an eventually cleared corner.

Frustration early for City as Zanzala had to be replaced in the 17th minute with a suspected knee injury. Podge Amond made his way onto the pitch. 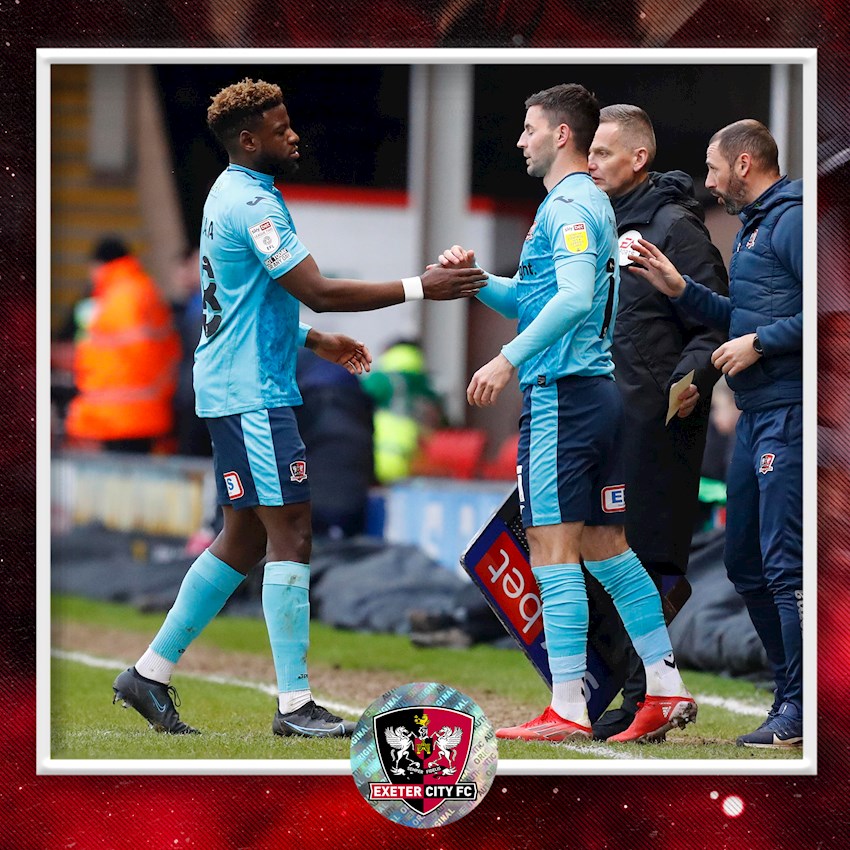 On 24 minutes, Jev Brown found room behind the Walsall line and drove a low ball across the face of goal. It just needed a toe and City would haven taken the lead. Jake Caprice similarly got to the by-line and delivered with the mirror result to the Jevani cross.

On 29 minutes, The Banks’s Stadium rose to commemorate our late, life-long City fan Sam Richardson, who sadly passed away this week. Sam’s family were in attendance at the game and everyone at Exeter City send their love and support through this time. Once a Grecian, forever a Grecian. We love you, Sam!

For the next couple of minutes, Walsall found their feet in the game. Conor Wilkinson sent a free-kick wide and Rollin Menayesee vaguely test Cam Dawson with a header, though the best chance in the period fell to MJ at the other end.

On forty minutes, Tim Dieng played a luscious pull-back to the captain who could only blaze over the bar. But moments before the break City finally broke the deadlock in smashing style.

The Grecians won a corner on the left-hand side. Archie Collins sumptuously whipped the ball into the middle and the silky-Frenchman Tim Dieng rose highest to thump Exeter ahead, complimented with a deafening roar from the away end. 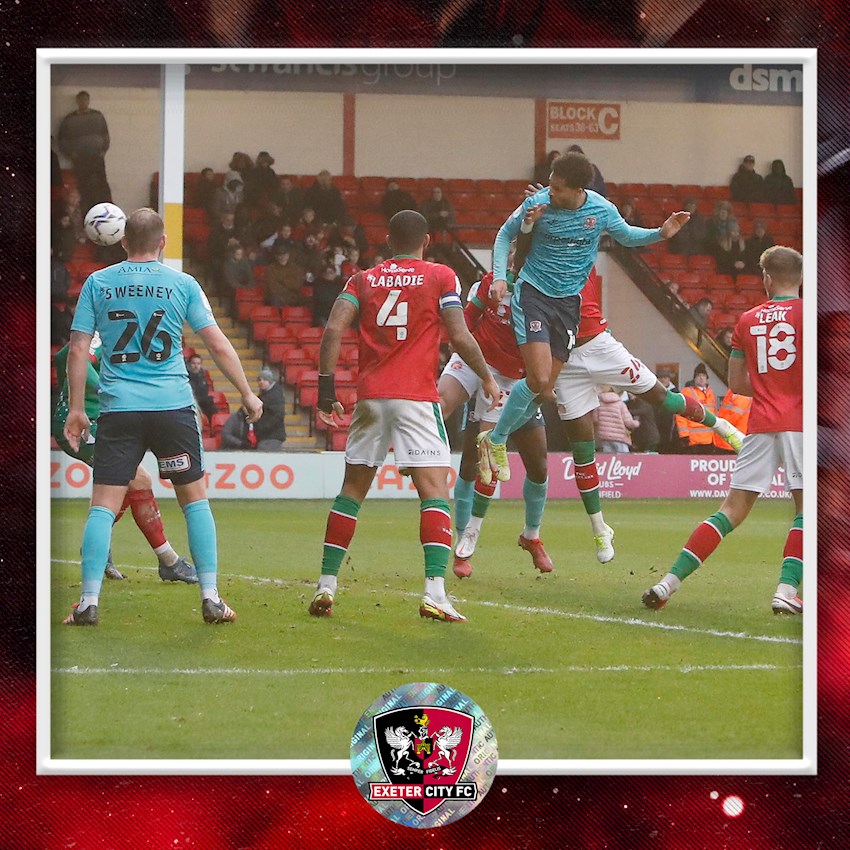 Seconds into the second half, City were agonisingly close to doubling their advantage. Brown’s delivery swept across the box. Only the crossbar spared Menayesee’s blushes as the defender’s diving header smashed against woodwork.

Moments later the Saddlers were down to ten-men.

A rush of blood from Rushworth cause Walsall a heap of trouble at the back. In the scramble a reckless challenge from two Walsall defenders chopped Jevani Brown in half. Though there was momentary advantage, the ref blew for the foul, with the man-in-black Darren Handley showing Rollin Menayesee his marching orders.

The home crowd found their voice after the incident but Brown almost silenced them straight away. Seeking inspiration from last week’s curler against Scunthorpe, on this occasion the forwards effort sailed wide.

Jos Labadie couldn’t replicate Dieng’s heroics in the first half as he met a deep corner just past the hour. Archie Collins tested Rushworth’s concentration levels with a low drive from range.

It felt like City needed a second, and on 70 minutes almost found their hearts desire. Jevani Brown swivelled in the box and flashed an effort across goal. Amond was within millimetres of poking in at the back stick. 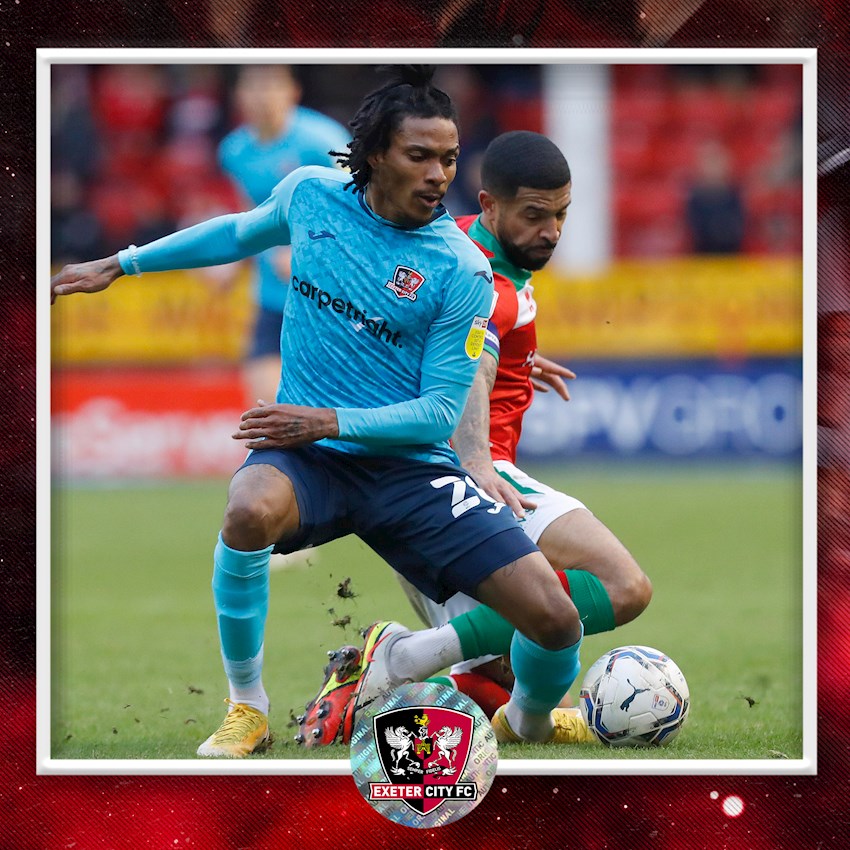 Brown again tested the gloves of the Walsall goalie with 15 minutes left. From a central position his curler was comfortable for the keeper to catch.

City should have made it safe on 83 minutes. MJ dispossessed Joss Labadie deep inside the Walsall half and sent away Brown. Another great pull back fell to Archie who again was denied by Man-of-the-Match Carl Rushworth.

But from the resulting corner the away end were sent in raptures with Cheick Diabate opening his account for the Grecians.

In a carbon copy of Tim Dieng’s first half header, the 19-year-old wriggled free during another perfect Archie Collins corner. In front of the excellent City support headed down into the net and wheeled away in jubilation.

Tickets and Grecian Travel are now on sale for City's trip to the Banks's Stadium to face Walsall on Saturday, January 22 in a 3pm kick-off.

We have been allocated 514 tickets for this fixture and the prices are as follows:

Ticket prices rise by £2 when bought on the day.

Disabled supporters are charge at full price for their age category and are entitled to bring a carer free of charge.

Grecian Travel, completely run by the Supporters' Club, and not for profit, is available for City's trip to Walsall. 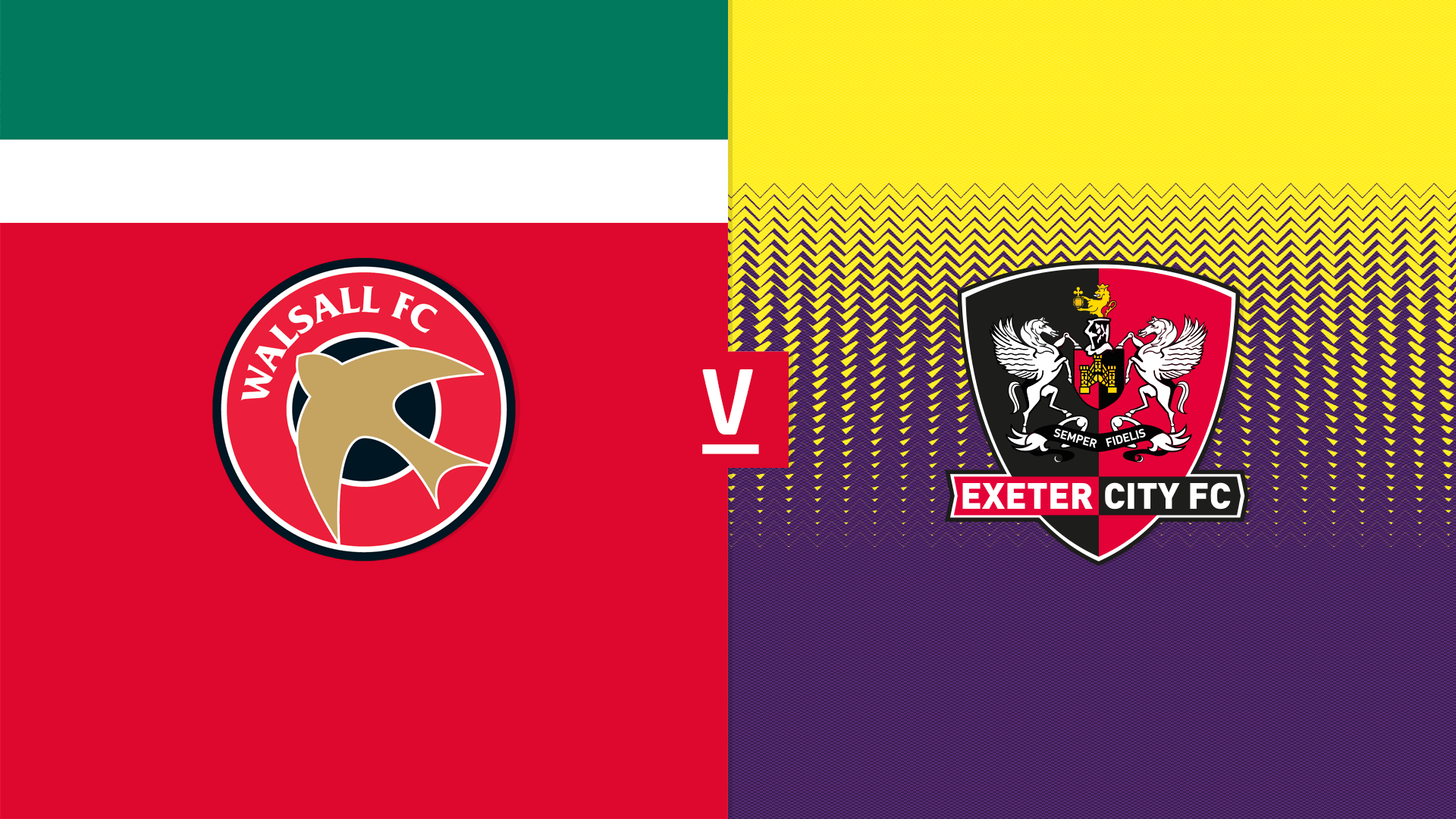 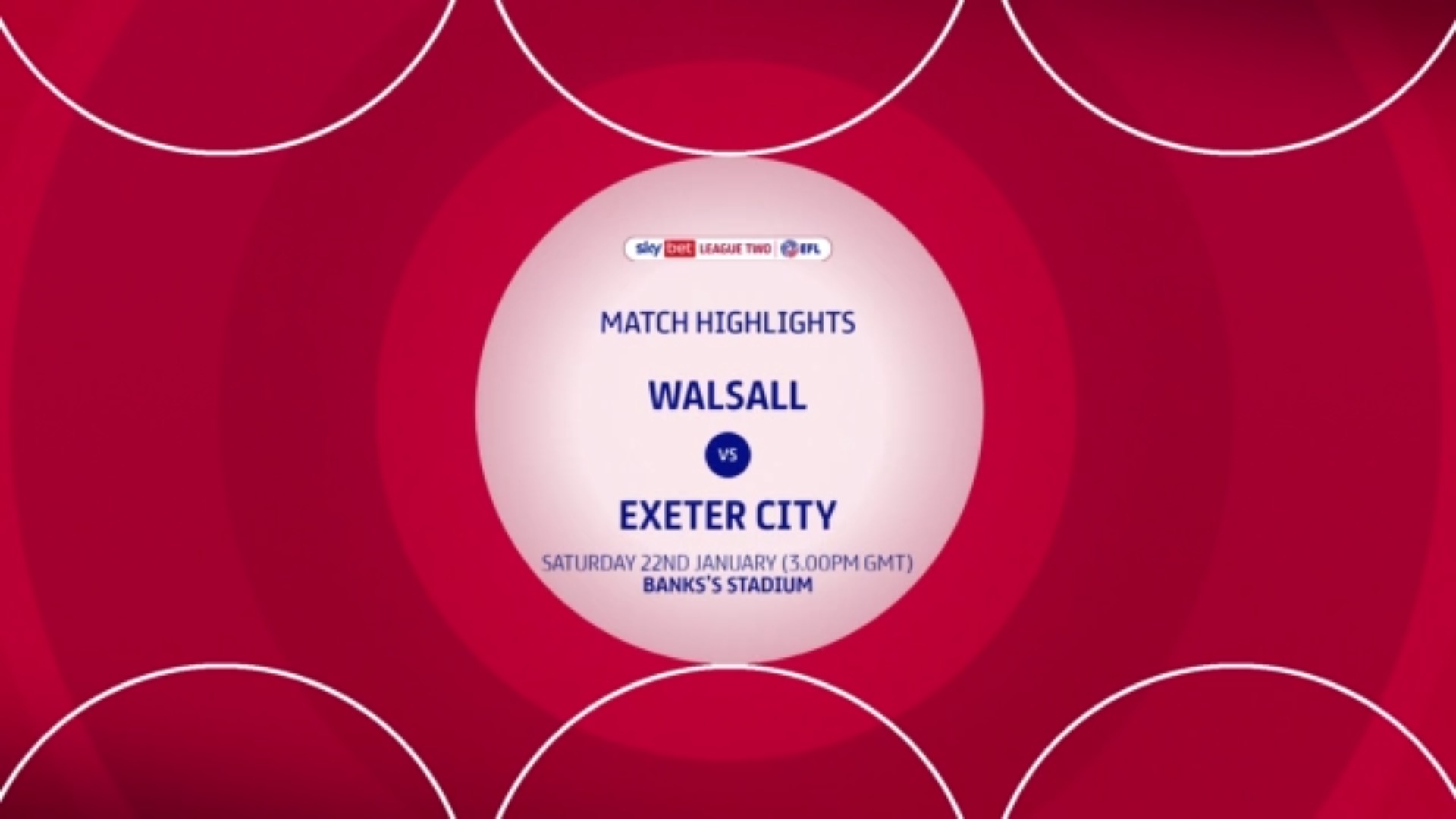 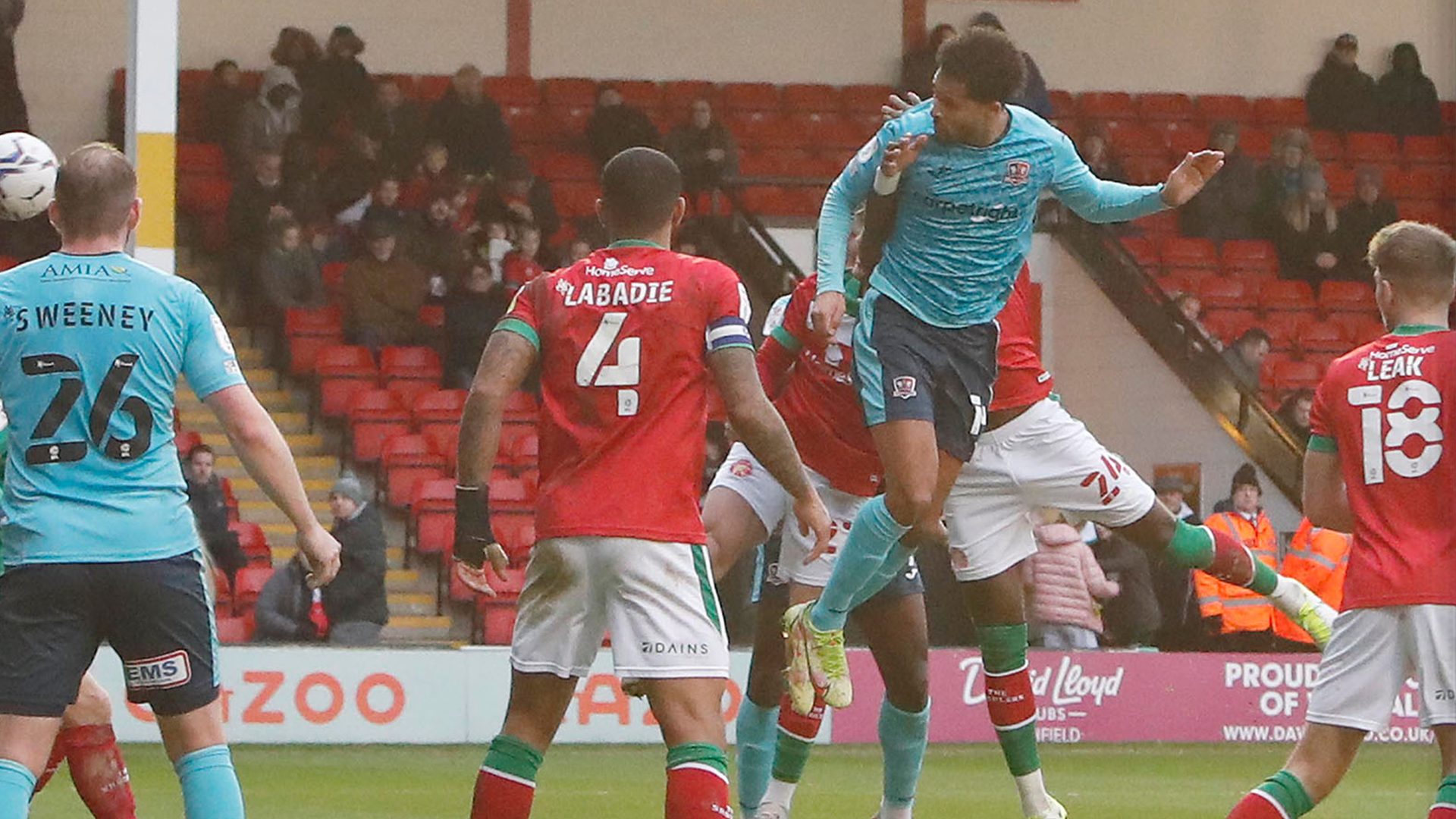