Exeter City's pre-season preparations continue as head to the Bob Lucas Stadium to face Weymouth this evening, with a 7.30pm kick off.

Following on from Friday's 4-3 win over Bath City, the Grecians travel to Dorset for the second summer in a row after a 1-1 draw in August 2020.

Covid restrictions have been lifted at the match, however Weymouth ask all supporters to consider safe practice. While no longer mandatory, face masks and social distancing is encouraged is indoor areas and hand gel will be available at all entrances, which they request supporters to use.

If you don't wish to watch the stream, we will have the usual coverage of the game across our social media channels, with reaction from Matt Taylor after the final whistle. 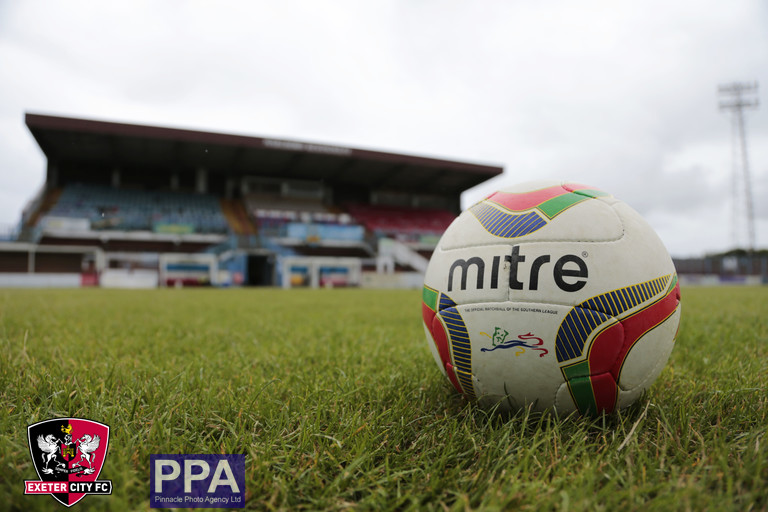 Exeter City continued their pre-season schedule with a 3-2 win against Weymouth at the Bob Lucas Stadium.

Grecians’ manager Matt Taylor named a strong side to face their toughest test in pre-season as they came up against National League opponents in the Terras.

Summer signing Sam Nombe, who scored four times in his last two matches, lead the line for the Grecians, whilst Nigel Atangana made a return to the side.

On a baking hot evening in Dorset, the Grecians looked to carry on their free scoring ways as evident against Bath City and Taunton Town, coming straight out of the blocks.

It took just four minutes for City to open the scoring, as last season’s player of the season Matt Jay found the back of the net. It all came from him taking a free kick quickly for Sam Nombe, and as City retained play for the next phase, he got the head to it to turn the ball in to give the Grecians a deserved early lead.

The Grecians were well on top in the early stages and almost made it two as Matt Jay found Sam Nombe who saw his effort on the swivel go just over the bar with less than ten minutes on the clock.

City doubled their lead on sixteen minutes with a superb move. Jack Sparkes won possession back and found Jevani Brown with the *perfect* ball over the top, Jevani then lobs the onrushing goalkeeper from just outside the area to put City in control.

The game then settled into a closer encounter as the hosts did more of the attacking, Scott Brown making a couple of decent saves including smothering a one-on-one chance from the Terras on the half hour mark.

Jevani Brown looked to have suffered a knock, which saw him depart, being replaced by James Dodd and the Grecians would head in at the break good value for their two-goal lead.

The second half started off in the same fashion as the first half with the Grecians going on the charge from the off, but it would be the Terras who almost got back into the match with Brandon Goodship charging down Scott Brown and the ball thankfully would head wide of the post.

City recovered from the early scare to make it three after fifty-one minutes as Sam Nombe continued his impressive pre-season form, finding the back of the net, curling home Matt Jay's lay off to make it five goals in his last three matches.

Weymouth got on the scoresheet on the hour mark as a City corner is cleared straight into the attack and Rose took the ball past his defender with some great skill after being found by Shields. Rose cut inside and slotted the ball past Brown with his right foot to make it 3-1.

The goal would spark the Grecians back into life and they would almost extend their lead through the lively Matt Jay, who has a go with a first-time effort from the edge of the box, but it’s well saved by the keeper who had only just come on.

The goal gave the hosts confidence, and they would continue to knock the ball about quite well. having a decent five-minute spell on the ball. A corner swung in just after seventy minutes was headed towards goal and a fine reaction save from Scott Brown kept City’s two-goal advantage.

The lively Rose continued to cause the City back line problems and after not winning a free kick from a challenge from Sweeney, Rose chased back to win the ball off Callum Rowe, but his effort from the edge of the box would sail high over the bar.

Weymouth really should have made it 3-2 as a cross across the box deflects off Callum Rowe, onto the bar, then safely into the hands of Scott Brown.

Weymouth then got the goal their strong end to the half deserved as Tyler Cordner sends a header past Scott Brown after 90 minutes, but it was too late and the match ended 3-2 to the Grecians.

The Grecians are next in action on Saturday as they travel to face Cardiff City at the Cardiff International Sports Campus in a 1pm kick-off. The match can be streamed live, click here to find out more.