Exeter City Women bounced back from Friday evening’s County Cup disappointment to gain a vital three league points; it was a victory that now leaves the team requiring a win next weekend to finish the season in third position.

Chesham were the brighter side in the opening minutes, the pace and intent of the front three signalling that the Grecians backline were going to be in for a busy afternoon. Despite that effective opening, it was the home side’s clinical front line that were to find the game’s first goal. Jaydee Seaman’s pass over the United defence found the run of Connie Pengelly, she cut back onto her left foot and found the bottom corner with the finish.

The Buckinghamshire side were unfazed and responded immediately, the ball bouncing around in the penalty area before Abbi Bond was forced to save with her feet. Pengelly forced a save from Lucia Delves In the Chesham goal, but it was the visitors who were to strike next. Bond picked up a pass that was deemed to have been intentional and Emma Delves dispatched the free kick into the far corner with a precise finish. Pengelly was proving a consistent threat for City, her chipped finish collected by Delves, before the newly crowned Young Player of the Year got her team back in front. Jaydee Seaman surged past the United challenges before playing a pass wide to Katie Grigg, her cross was struck into the far corner by Pengelly.

Chesham again responded; a free kick failed to find the required connection from the attacking players before the linesman’s flag was already up as the follow up shot was drilled goalward. The pace of Delves was the next threat for the City backline to deal with, her cross bravely smothered by Bond as Gemma Fraser looked set for a tap in. Yet for all the pressure, the Grecians have undoubted quality when they piece passages of play together, and it was a slick passing move that saw Emily Toogood provide Sarah Stacey with a chance. The target woman rolled in goal number twenty of her season to bring a perfect end to an exhilarating first half. 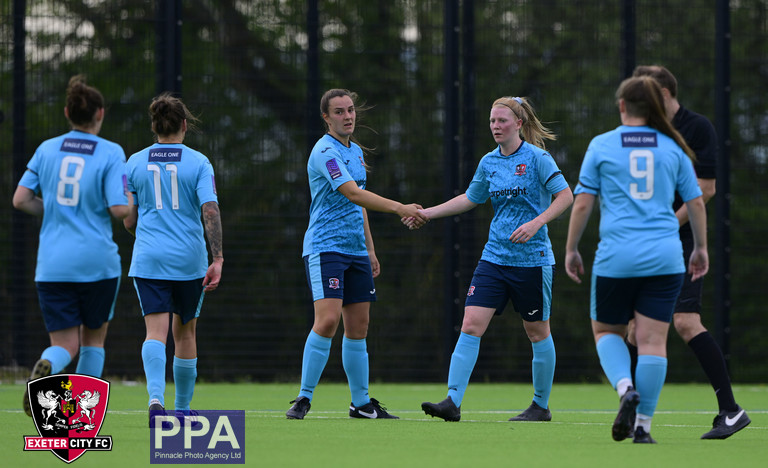 From a perfect end to a nightmare start. Chesham’s first attack of the half saw a low Delves cross drilled along the City penalty area and touched in at the back post by Kim Farrow. The next attack nearly saw the visitors level, only a strong City block prevented the effort on goal, but the visitors were now finding space to exploit. With nearly an hour played it appeared that equaliser had arrived, another ball over the top for the ever willing front line to chase and, as the ball was squared for Gemma Fraser to tap in, the linesman’s flag saved City.

Fraser lifted the ball over Charley Prouse before shooting narrowly wide as the pressure was sustained, a Delves shot rattling the crossbar moments later with the rebound put over the top when it looked easier to score. City were tiring, the effects of two games in three days really taking a toll, and it was only until the last ten minutes that they found their bearing once more.

Mia Preston and Jess Sandland were a welcome introduction of energy to the team, and both fought tirelessly to help their side maintain the lead. Preston carried the ball half the length of the pitch, drawing a near post save from Delves, before more battling play led to a chance for Stacey that she fired over the crossbar. 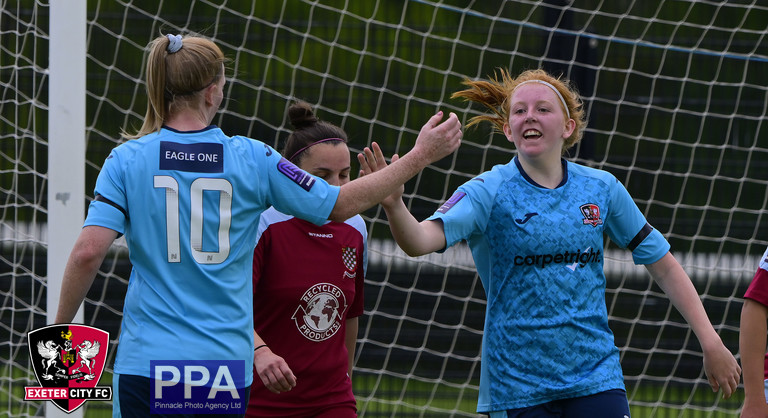 One player who has been exceptional in recent weeks is teenager Jess Sandland. Unfortunate to miss a decisive penalty on Friday, it says everything about her character that she provided the game’s crucial moment late on. Sandland surged past the tiring Chesham defence and her precise low cross was tapped in by Stacey to seal the three points.

Abbie Britton and Aaron Wakley’s side have had a tough weekend, with a mixture of emotions. Friday’s disappointing County Cup Final performance, the pride of sharing centre stage with the Men’s team at the Club’s Award’s evening and the sad news that Captain Manfy Sharpe had suffered a close family bereavement prior to Friday’s final.

Whilst there was plenty of flowing football at times, this was an uncharacteristic City win, with sheer determination the main source of fuel to maintain the second half lead. One game to go and it will provide a shoot out for third, with City needing beat Southampton Women’s FC to end a fine season and continue the advancement for another promotion push in 2022/2023.