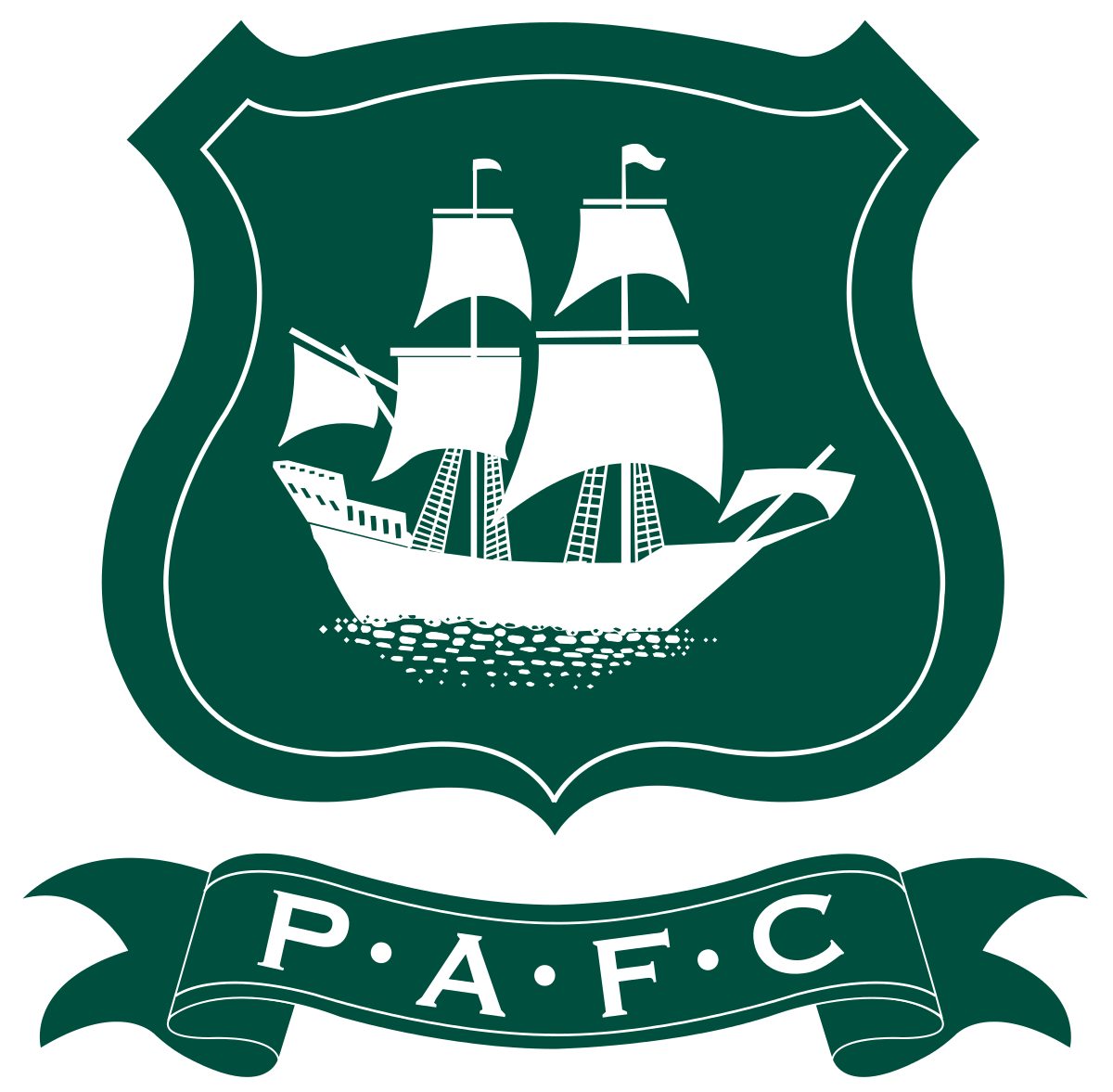 Devon’s biggest rivals put on a wonderful advert for Women’s football in the South West as, in front of a record attendance for a Women’s game at St James Park, Exeter City won a penalty shootout to progress in the Devon County Cup after a 1-1 draw.

After a cagey start to the game, City created two wonderful opportunities to take the lead. A short free kick routine saw a low shot brilliantly palmed onto the post by Argyle keeper Poppy Soper, before the Welsh International was again at her best moments later, tipping a Connie Pengelly shot onto the top of the crossbar after a flowing City move.

Emily Toogood’s slaloming run into the penalty area saw a shot just over, an opportunity that came in between two Zoe Cunningham free kicks. The Plymouth Captain has a reputation for her strikes from distance and, following the first effort clearing the crossbar, she found her range with the second. A dipping drive clipping the underside of the crossbar to beat Abbi Bond in the Grecians goal and give the visitors the lead. 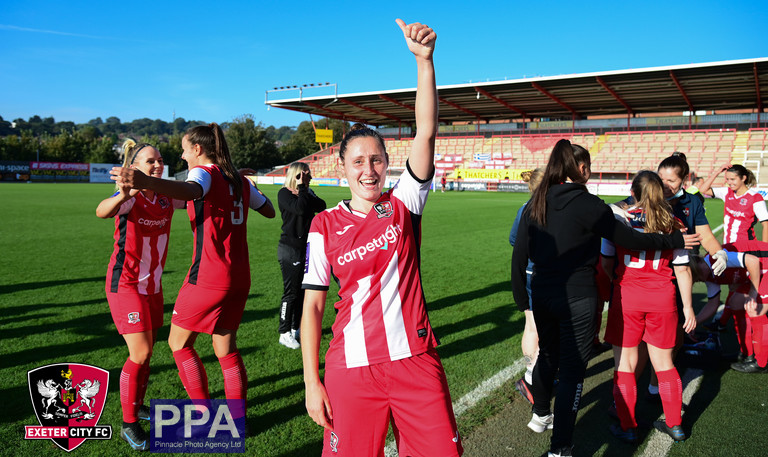 City’s response was almost immediate, Phoebe Baker’s driving run into the penalty area producing more good goalkeeper from Soper to frustrate the Grecians once again. It was turning out to be a good afternoon for goalkeepers, at the other end, Abbi Bond was at her best to keep out a fierce strike from Beth Ireland, palming the ball to safety as it arrowed towards the top corner.

The visitors were now on top, creating half chances, without that clear opportunity to extend the lead. City had to remain resolute with the defensive trio of Prouse, Seaman and Sharpe all making important challenges. However, with the half coming to an end, it was City that created that one big opportunity. Phoebe Baker’s free kick was saved by Soper, Manfy Sharpe reacted quickest, but her effort was over the bar from close range.

The Grecians started the second half in confident fashion, neat football was allowing them to gain territory, but the Plymouth defence stood resolute in allowing a flow of chances to result from City’s good play. Tash Knapman went close for Argyle, before Anthea Kaptein forced Soper into a save at her near post. Another free kick from Phoebe Baker then went close, as the game was evenly poised heading into the last twenty minutes of play.

As City pushed forward in search of an equaliser, the ball over the top of the home side’s defence was proving effective, and it is with such a pass that Plymouth created a wonderful opportunity to finish the tie. Tash Knapman raced clear and as she slotted the ball to Bond’s left; the City keeper brilliantly denied the former Grecians’ striker a certain goal.

It was a big moment, as within five minutes, City were level. A crossing opportunity was worked on the home side’s right, Sarah Stacey drilling the ball across the box and Zoe Watkins getting the final touch as the ball crept over the line to cue jubilant celebrations. 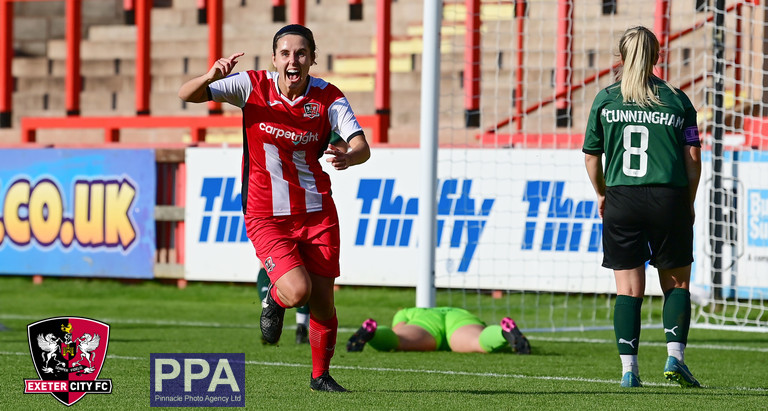 Both sides were now desperately trying to find a winner, Steph Beck having a strong influence in the game following her arrival onto the pitch, but it would be the visitors who would come closest. A free kick into the City box rebounded off bodies and into the path of an Argyle forward, yet it was Bond who was to win the battle once more, denying the chance with another save low to her left.

Already treated to a hard fought contest full of good football, the record crowd would now get to witness all the drama of a penalty shootout. Tash Knapman went first, her effort was saved by Bond to give City the advantage. Calm and composed penalties from the experienced Zoe Watkins, Steph Beck, Anthea Kaptein and Sarah Stacey put City on the brink, and when Bond denied Argyle Captain Zoe Cunningham, the Grecians were through. 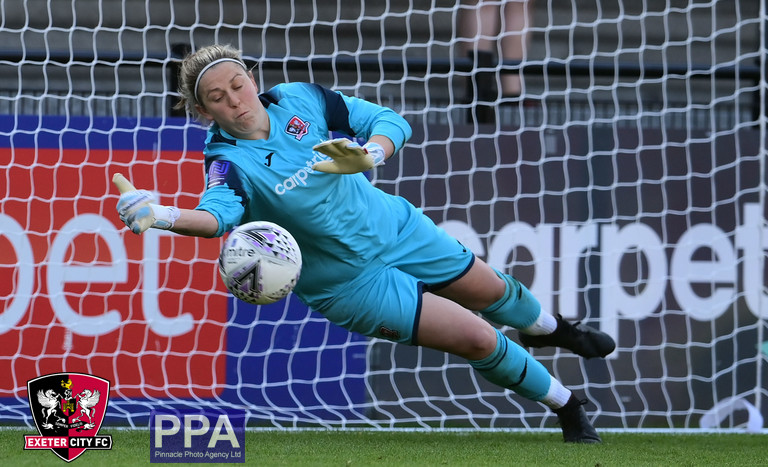 A jubilant St James Park were on their feet, a host of young aspiring footballers getting their first opportunity to witness the Women’s game in person and enjoying every minute of meeting their new heroes. Defeating your local rivals in a dramatic penalty shootout in front of 1380 supporters, it could not have gone much better for Abbie Britton and Aaron Wakley’s team, and with the response and enjoyment from the crowd, it will be hoped that a return visit to St James Park will not be too far away. 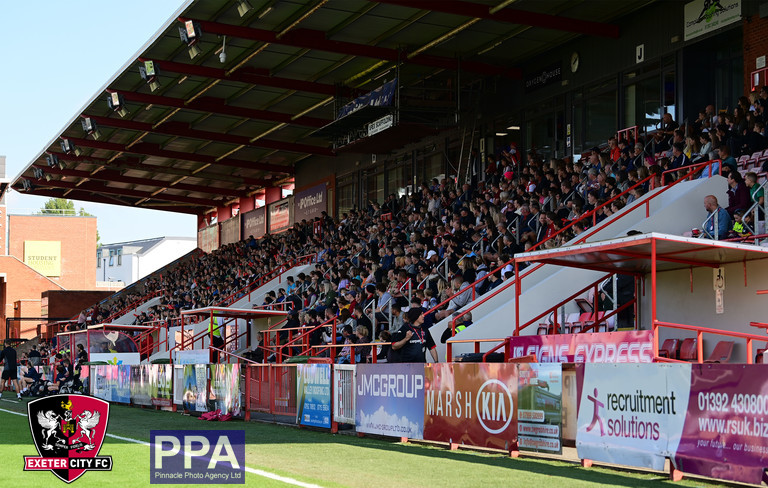