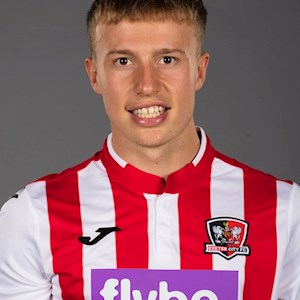 Sponsors: If you would like to sponsor Jordan for the 2019/20 season please contact operations manager Andy Gillard via email andy.gillard@ecfc.co.uk

Jordan Dyer has yet to make a first-team debut for the club but was an unused sub in the Checkatrade.com Trophy for the club last season.

Jordan, who is from Exeter and went to Isca School, signed for City's academy at under-10s.

He was captain of the under-16s team and can play in defence or midfield. He has got a great mentality and when he plays on the front foot with his defending he is very tough to play against. He has worked his way up to already sign a professional contract with the club. He is a tough and competitive centre-half who wins headers and is hard to beat one-v-one.