Man in the Lion Mask

Exeter City will be hoping to make it to the third round of the FA Cup this weekend as they square off against Forest Green Rovers away from home in what will be an exciting second round tie. Man behind the Mask, Dan Gottschalk takes a look at City's opponents.

City have already visited Mark Cooper’s side in the league this season, coming away in September with a comprehensive 3-1 win over their newly promoted rivals. The Grecians will be hoping for a repeat performance tomorrow and secure their spot in the third round draw on Monday night.

Despite being in their debut season in the Football League, Forest Green Rovers have a history trailing all the way back to 1889. Hailing from Nailsworth in Gloucestershire, the ‘Green Army’ played at their Lawn ground from being founded all the way up to 2006.

Forest Green Rovers have reached the third round of the FA Cup twice before, making back to back appearances in the 2008/9 and the 2009/10 seasons, having only made their debut in the 1st round of the competition in the 1999/2000 season.

The club is perhaps more famous for its recent history. Since local entrepreneur and Ecotricity owner Dale Vince became the majority shareholder of the club in 2010, FGR have become famous for their commitment to sustainability and in October 2015, became the world’s first all vegan football club.

Forest Green Rovers are currently enjoying their first season of being in the Football League in their history after gaining promotion from the National League via the play-offs last season.

After a rough start to the season, the ‘Green Devils’ have found their form in recent games, taking 14 points from their last eight matches and sat 20th in the League Two, three points clear of the relegation zone.

In the first round of the FA Cup this season, Forest Green Rovers sealed their place in the 2nd round with a 1-0 win over National League side Macclesfield Town. Christian Doidge provided the finish late on in the first half that day and Rovers fans will be hoping he makes a similar impact tomorrow.

Forest Green Rovers have been on an impressive run lately and will be heading in to tomorrows tie with some confidence. At the centre of this decent run of form has been talismanic striker Christian Doidge. The 6ft2 front man from Wales started his career at Southampton and signed for Rovers in 2016 from Dagenham and Redbridge. Doidge has got an impressive scoring record for the ‘Green Army’, netting 29 times in just 45 appearances and has scored 12 times in all competitions already this season.

Mark Cooper’s side also host international talent in their ranks. Young forward Omar Bugiel who signed for the side earlier this year boasts international experience with Lebanon, being eligible to play for Lebanon through his father and making his debut as a substitute in November in a 1-0 win over Singapore. Bugiel is Rovers’ second highest goal scorer so far this season, finding the net 3 times.

The last time Exeter City faced Forest Green Rovers at the New Lawn was in September this year, the Grecians taking all three points away from the encounter in a 3-1 victory.

The Grecians have faced Forest Green Rovers in the FA Cup before, facing the Gloucestershire side away from home in the 1st round in 2002. The game finished 0-0 that day with a reply at St James Park needed to determine the winner of the tie.

It was Exeter who would eventually proceed to the second round in 2002 courtesy of goals from Gareth Sheldon and Matt Lock. 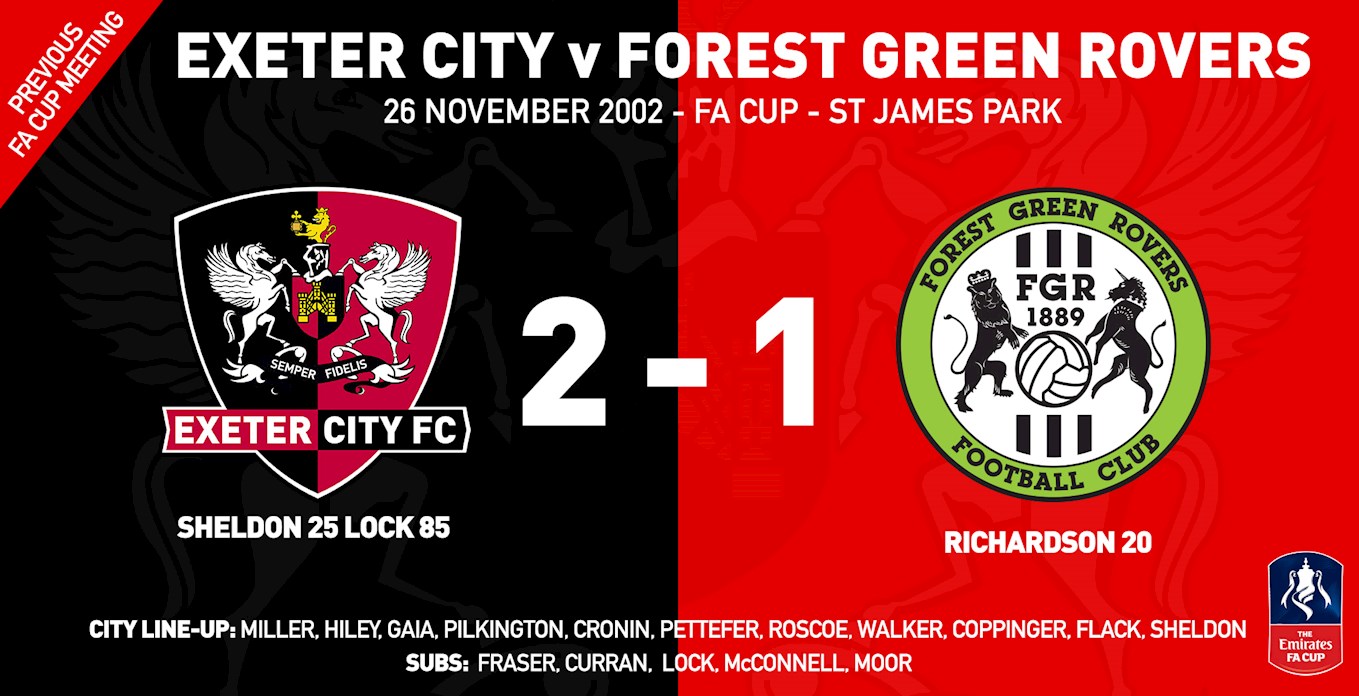 After a second round win at home to Rushden & Diamonds, the Grecians travelled to then Premier League side Charlton Athletic, managed by Addicks legend Alan Curbishley with the London side coming away as eventual winners in a game that ended 3-1.

Tomorrow’s game against Forest Green Rovers is an all-ticket match. Tickets are still available until 4.30pm today and can be purchased over the phone (01392 411 243), online or in person at club reception.