Exeter City’s under-18s produced a brilliant display last Saturday when they triumphed 3-0 in the Devon derby against Plymouth Argyle.

Josh Key and Jack Sparkes both scored to put the young Grecians well in control of the match by half-time, and although the Pilgrims had a short spell in the second period, they never really threatened the City lead.

Joel Randall secured the victory when he scored the third and final goal for the hosts, resulting in Exeter securing another three points as they hunt down league leaders AFC Bournemouth for that top spot in the Youth Alliance South West division.

Dan Green’s men began the contest brightly, and created numerous openings during the early exchanges. Sparkes started in a lively manner as he saw two chances go begging inside the first 10 minutes, whilst Mitch Thomas also hit a low shot that was comfortable enough for the Argyle shot-stopper.

Sparkes and Harry Kite both saw chances go begging as the home team continued to crank up the pressure on the Green Army, however the visitors did perhaps create the best chance of the game when a ball into the penalty area was met by a deft volley from a Plymouth striker, before Lewis Williams in the Grecians goal produced a superb fingertip save to keep the scoreline at 0-0.

Midway through the first period, Sparkes saw a sumptuous free-kick opportunity tipped over the crossbar, whilst minutes later, Key saw a half-volley denied by what was becoming a busy Argyle goalkeeper.

However, with 30 minutes on the clock, the breakthrough was eventually made. After Sparkes and Kite combined, the ball worked it’s way out to Randall on the left flank. The winger beat his man before sending a cross to the far post, where Key rose highest to head home and give City a well-deserved lead.

The away side flashed an effort wide as they looked for an immediate response, but the hosts always seemed in control of the half. In fact, six minutes before interval Exeter doubled their advantage.

Key did brilliantly to nick the ball away from a Pilgrims defender, before sliding it into James Dodd. The playmaker squared the ball to Sparkes for an easy tap in to make it 2-0 to Green’s men, who were displaying a real purpose to their attacking play.

Half-time arrived with the home team well in command, in a game where perhaps they should have led by more. The advantage was increased during the early stages of the second period.

After spreading the ball to the left wing, Brandon Parsons found himself on the edge of the box, before playing a superb through ball into Randall. The midfielder finished emphatically with a near post finish to stretch the Grecians lead to three goals after just 52 minutes.

In response, Argyle caused City some problems with a dangerous free-kick, but everything that was thrown in the direction of the hosts was met with stubborn resistance.

Key and Randall had further chances to increase their own, and their team’s goal tally, but both failed to convert their respective chances.

Substitutions were made by Green, introducing Harry Gardner, Lewis Wilson, Joe Belston and Josh Williams to the fray. And in spite of making the changes, Exeter’s build-up play was affected very little.

Parsons saw an effort well saved by the Pilgrims’ goalkeeper, whilst Thomas perhaps had the best chance to score the home side’s fourth goal 12 minutes from time when Key’s low cross found the central-midfielder, but his shot cannoned off of the upright and away to safety.

With time running out, the Grecians continued to come forward in the search of more goals, with Kite and Gardner seeing efforts narrowly miss.

Despite all of the chances created, City’s youngsters had to settle for a 3-0 victory, leaving Green pleased with his team’s performance and a hope that they can maintain their unbeaten run as they continue to apply pressure on AFC Bournemouth in the league standings.

Exeter City under-18s coach, Dan Green: “It was an impressive performance. The biggest thing is how hard everyone is working to help us perform as a team. It’s always pleasing to see different players score your goals, and on reflection we could have scored even more.

“They applied a little bit of pressure but in fairness we limited that to nothing clear-cut. The whole team worked really hard to keep the ball away from our goal, and the players worked hard towards our team plan.

“Lewis Williams’ distribution was excellent, and James Dodd and Joel Randall’s work rate was good. Jordan Dyer and Harry Kite showed real desire in stopping Plymouth play, but overall it was a very professional performance from the entire team. 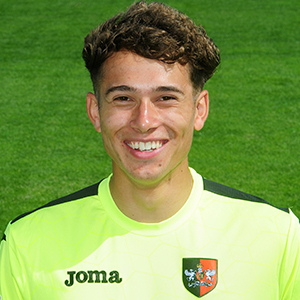 “There’s definitely bits to improve on. They had a great chance at 0-0 which Lewis Williams managed to save, and we are well aware that in future games we might not get as many opportunities to score so need to be ruthless in front of goal.

"We still believe there is more to come and right now we’re very focused as a squad, and we want to put in another good performance against Cheltenham next time out.”