Exeter City defender Luke Croll says he has been left frustrated after missing a large part of the season through injury but is delighted to be back to full fitness and is hoping to help the Grecians to promotion this season.

The 23-year-old, who joined City on a permanent deal from Crystal Palace last summer after a loan spell at St James Park last season, featured in six games earlier in the season but came off with a groin injury in October’s match with Carlisle United.

A long recovery period featuring multiple setbacks saw to it that Luke would miss a large part of the 2017/18 season. But after making a return from the bench against Port Vale last month, the defender says he is keen to get more minutes under his belt during the remaining matches of the season.

On his return to full fitness, Luke says it was a hard journey to return to the first team after a great deal of setbacks but credits the City backroom staff for their role in his recovery.

He said: “I was out for a lot longer than I expected, it’s been a long road, but I’ve spent a lot of time with Ade Saunderson and doing extra work with Matt Taylor. I feel good, of course everyone wants to play, but I’m just happy to be back and able to kick a ball. I was out for five or six months which isn’t nice, you spend a lot of time by yourself, running around the training ground seven times and it can get to you. I’m just happy to be back on the training pitch and being available.”

Luke’s injury initially came against Plymouth Argyle in the Checkatrade Trophy in early October, but keen to not miss anymore first team action he admits he tried to play through the discomfort.

“I felt my groin go in the first half. I played through it off my adrenaline and for the rest of the week I felt it. I’d just come back from a different injury and I felt this one, but because I’d managed to get myself in the team I thought I’d see how it goes.

“The game against Carlisle came along and I felt it tear again after playing a pass into Jayden Stockley early on. I tried to play through it and carry on, but I thought I wasn’t going to help the team by doing this. I got it scanned on the Monday and it came back as a grade two tear, which is between eight and 12 weeks out. There were setbacks with the injury and it took longer than I wanted but I’m back now. I feel better than I did before I got injured, all the niggles that I had cleared up.” 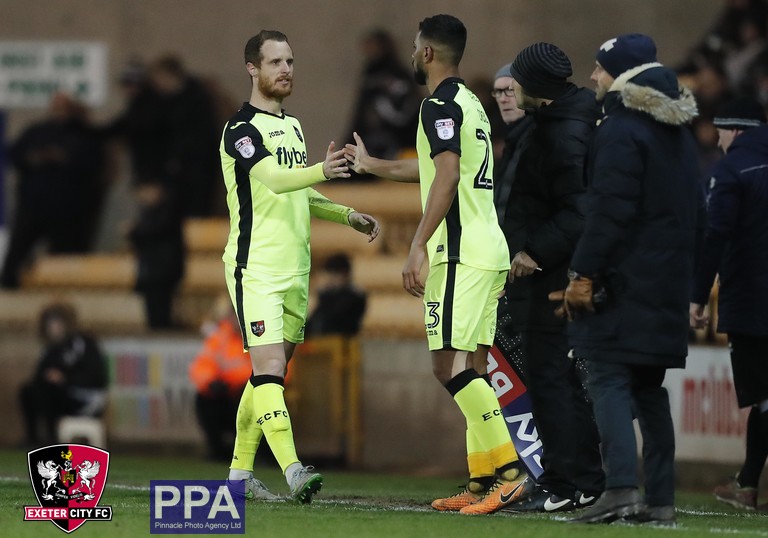 After signing for the Grecians on a permanent deal in the summer, Luke admitted he was excited to kick on and continue his development at St James Park, and adds how frustrated he has been to watch from the sidelines for much of the campaign.

He continued: “Last year wasn’t the best year for me personally and I feel like I’d joined City feeling more part of it this season and I was playing with freedom.

“It was frustrating to pick up an injury which could have been prevented. Things happen for one reason or another, I’m just working on not being injured again and working over the summer, working every day in the gym.”

With the injury now behind him, Luke is targeting promotion with the Grecians as they set about chasing the automatic spots with five games to go. Something the defender is confident the side have ability to do.

“The boys have done well, you could say it’s done us a favour being in fourth because we aren’t necessarily losing anything, we are chasing after people and we’ve done quite well at that. Hopefully we can continue to approach each game as we have done, we don’t want to change anything too much because we believe in the system and hopefully it works on Saturday and in the remaining games.

With City keen to record a third successive win when they come up against Accrington Stanley at the weekend, Luke admits it will be a difficult test against a side who can clinch automatic promotion with a win over the Grecians on Saturday.

He said: “They must be doing something right because they are top of the league but if you beat any team in this league then you’ll feel like you can do it again. We’ll be going into the match just as confident as they are. We want to upset their party.

“It will be massive (to win at Accrington), we don’t want to be relying on other teams to slip up, all we can do is apply the pressure. Teams like Wycombe are going to be looking back but all we can do is focus on ourselves, try and attack like we have done. Come the end of the season we will see where we are.”