One defeat at Wembley is usually enough for anyone, but two defeats is something even tougher to take.

Of the current Exeter City squad there are just four members who played a part in both League Two play-off finals. Christy Pym, who has had an outstanding 12 months from a personal perspective as he scooped up six end of season awards. Craig Woodman, the ever reliable and experienced left back.

Jake Taylor, who has recently become club captain following his consistent displays in midfield, and Pierce Sweeney, a defender who has improved drastically over the past couple of seasons to turn himself into a dependable right back with an eye for goal and an assist.

The 23-year-old has picked up from where he left off last season as he netted nine times, the majority of which came from the penalty spot, but he has already proved ice cold from 12-yards this season with his penalty converted against Morecambe last week and now sits on double figures for goals scored in his Exeter City career.

But how does a player who has gone through the ecstasy of confirming a trip to Wembley and then losing in the final twice in a row, bounce back from that?

“It’s difficult to forget about what happened the last two seasons,” explains Pierce. 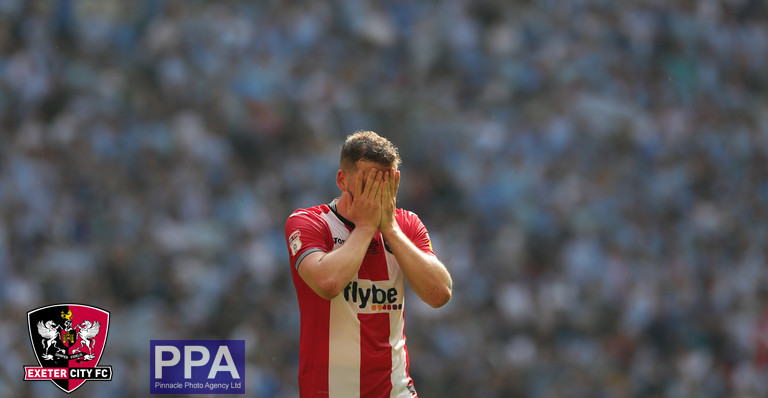 Pierce admits City were far from their best at Wembley

“We’ve had lots of conversations about the two play-off semi-finals, Jack Stacey scoring in the last minute, and us beating Lincoln City 3-1 at home.

“But they were two different situations because in the first season we were bottom of the league around Christmas time and we were hoping to get top three.

“Last season it was a bit tougher because we fancied ourselves big time to get top three, we didn’t, so we were disappointed with that going into the play-offs. We got to the play-off final and we weren’t ourselves at Wembley, everyone knows that. We didn’t perform to the standards that we had previously set in the semi-finals and the league. We have to put it behind us and we’ve started fantastically so far in the first two games.”

It’s clear that those defeats have been pondered, but with the news of drastic changes at St James Park over the summer, there is a reinvigoration about the playing squad as they dust themselves down from what happened last year and turn to a new era. Something Pierce is embracing.

“New faces have come in with a little bit of a spring in their steps, trying to impress,” he said. 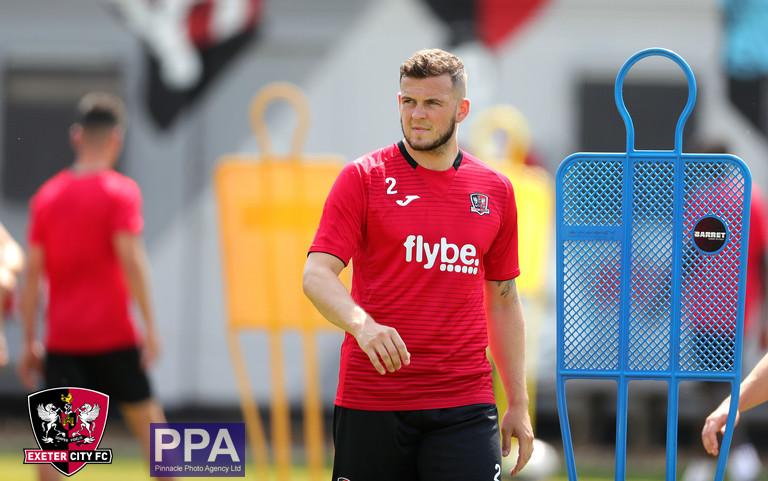 Pierce in pre-season training at the Cliff Hill training ground

“It’s always good to bring in new faces and use their experience and give you little bits of advice.

“What I like about Matt (Taylor) is the fact that it is black and white, he tells you to do this and to do that, it’s structured and he knows what you’re good at. He knows how to get the best out of you. He’s been here the last couple of years as a coach and now he’s stepped up to be a manager, so we know what he is like and how he likes to play football.

“Eric (Kinder), Chris (Weale) and Andrew (Wiseman) have all come in and they’re all nice blokes. They have a lot of experience in football, which is good to get an insight. They all have little tips. It’s always going to be a bit of a culture shock from all the other staff leaving that have been here for so long. It’s going to take a bit of time to settle down and get used to the way people work but, so far, it’s been really good.” 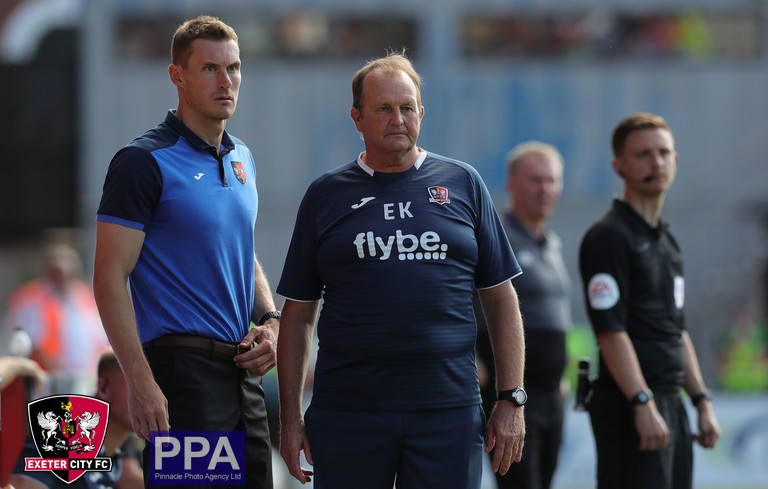 Pierce has continued to develop on the field as well as impose himself on the City faithful with his easy-going and cheerful persona, but behind that it is clear that the Grecians have a player on their hands who is desperate to develop, learn and improve on previous campaigns.

“My defending has got a lot better,” explains Pierce. “I’ve had to defend more in one-v-one situations being a full back, as opposed to being a centre half. It’s a bit of a different game because you don’t have players on the outside of you, but you’ve got players inside. I’ve worked on that over the last two and a bit years that I’ve been here. My quality on the ball and delivery forward has improved playing as a full back. There is always room for improvement, but I think they are the two areas that I’ve improved on.”

If you’d have said to Pierce at the beginning of the 2017/18 campaign that he would end the season as City’s second top goal scorer for the campaign, he would have been shocked.

However, when the Irishman stepped up to seal all three points for the Grecians against Accrington Stanley last season, he did so with a smart finish from the penalty spot.

Now the designated penalty taker for the club after success throughout last season and at the beginning of this campaign, the full back explains he thrives on the pressure.

“Surprisingly, I do enjoy it, I like the pressure,” he said. “Before I take the penalty I’m not aware of what minute it is. I remember in the FA Cup against Forest Green Rovers it was late in the game, but I didn’t know what time it was, I think it was early 80 minutes to get to 1-1 and Saturday (against Morecambe) it turned out it was in the 43rd minute. They were crucial minutes in the game and I don’t really realise it at the time. I really enjoy the pressure and I think I strive on it.

“I was delighted to get one goal, never mind 10! I didn’t see myself scoring five or 10 or whatever. It’s part of my game now because I am looking to score as many penalties as I can but before that I wasn’t bothered about scoring goals it was all about clean sheets. Now, it’s about assisting and sticking one on Jayden’s head as well as scoring penalties. The more the merrier.”

But, of course, as part of the defence Pierce is hoping that the Grecians can keep a settled back four together for much of the campaign. During his two previous seasons there has been unavoidable changes to the heart of the City defence with former captain, Jordan Moore-Taylor, and Troy Brown both struggling with injuries meaning the likes of Jordan Storey, who has now earned himself a move to Championship side Preston North End, Dean Moxey and Luke Croll have all had to spend time in the centre of defence.

On the injury situation in recent seasons, Pierce said: “For the last two seasons that I’ve been here we haven’t really had a back four that have played 35 or 40 games together, it’s been chopping and changing every two or three games. It’s been tough to get a settled back four or five together. I remember by debut away to Blackpool, Troy Brown and I played in central defence, Jordan Moore-Taylor played left back, and Craig Woodman played right back, so it was a bit all over the shop. It’s important this year to keep a settled back four.” 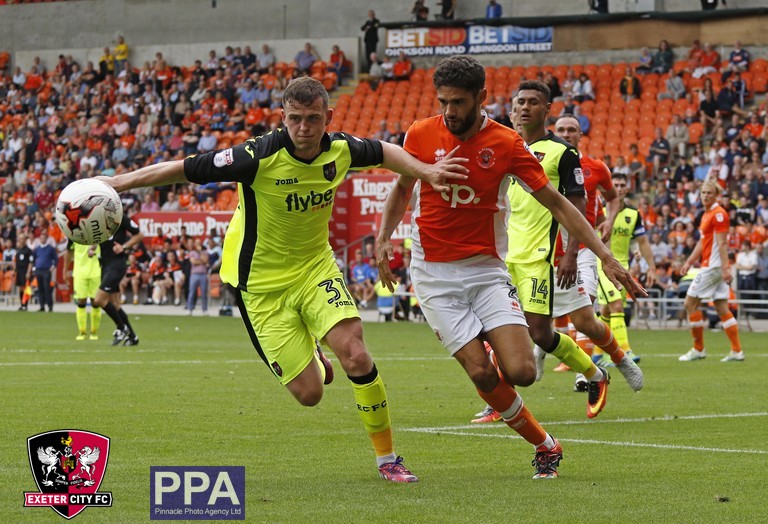 Pierce in action against Blackpool on his debut

And Pierce will be hoping that, with the introduction of Aaron Martin, they can put together some consistency under Matt Taylor.

“Aaron is an experienced player, a big lad, that has played at a higher level,” he said.

“He has come in and been very positive. We haven’t had the easiest of starts with Morecambe having a big striker (Vadaine Oliver), and it was tough against Carlisle United. He’s enjoying it and I’m enjoying playing beside a new player that I’ve never played with before.”

It’s clear that Pierce is excited about a new era at St James Park and he explains that the feeling has filtered through to the dressing room. With the introduction of Matt, as well as his coaching team and the new stand to come it is a promising time at the club as it continues its development.

“The sooner the better the stand gets up and we get more fans through the door and a better atmosphere,” smiles Pierce. “Everyone wants to play in front of big crowds, I think the new changing rooms are a big plus. It helps to attract new players, if you want to sign bigger players and bring them down then you only have to look at the stadium or look at the training facilities. As a footballer you want to work at the best facilities, so I think it’s only going to be positive."