Exeter City defender Pierce Sweeney says the Grecians are expecting a tough encounter when they take on Morecambe on Saturday in Sky Bet League Two.

City started their season in positive fashion as they beat Carlisle United 3-1 at St James Park in the opening encounter of the campaign.

And despite the Shrimps falling to a 6-0 defeat away at Crewe Alexandra in their first match of the season, Pierce says that City will be wary of the threat that Jim Bentley’s side pose.

He said: “We’ve watched the match from last week and it wasn’t a 6-0 game, really. Morecambe had a couple of good chances and they hit the post. They looked quite dangerous, so I don’t think the scoreline reflected the performance.

“We’re expecting a tough game, Morecambe are at home, and they did us over last year (in what was a 2-1 defeat for City), so we are going to take it like every other game, treat them with respect and work hard.”

The Irishman was also quick to praise the City fans that are making the almost 600-mile round trip to support the team as they go in search of their second successive win.

He continued: “Since I’ve been here Exeter have always had a good following away from home so hopefully on Saturday, and for the future going forward, the Grecians turn up in their numbers and back us.” 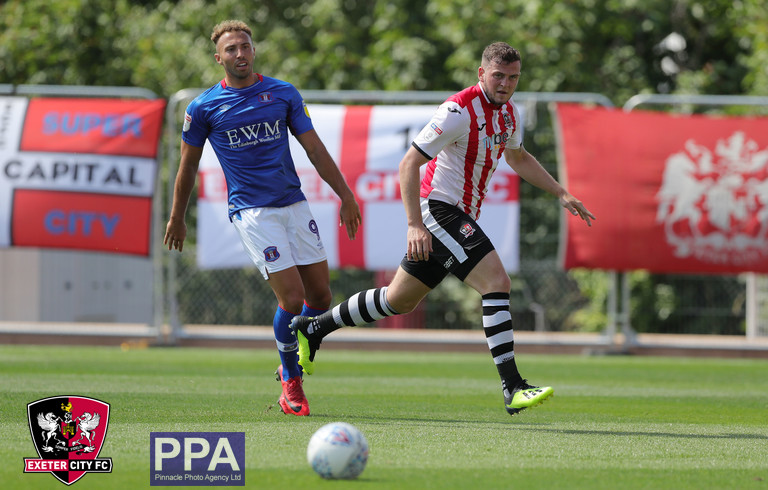 Following the win over Carlisle, Pierce admits there is a good spirit in the camp and the new summer additions at St James Park have settled well into the squad.

“It’s lively, the boys are in good spirits after a good first home win of the season and a good performance,” said Pierce. “We’re confident, but we were confident even before last week, so we’ll take that into Saturday at Morecambe.

“Everybody that Matty (Taylor) has brought in has gelled well. Last week three of the boys got a goal each (Nicky Law, Jonathan Forte and Tristan Abrahams) which is good to see, and it takes a bit of pressure of Jayden (Stockley) having to score 25 goals again. The new boys have been fantastic, they’re good lads and they’re good players.”