Belief. A characteristic that every footballer needs when things perhaps aren't going your way on the pitch.

Belief in yourself, in your teammates and in your coaching staff, that together you can come through a rough patch.

And after making more than 500 career appearances, 258 of which came at Exeter City, Dean Moxey will understand what it takes to get through a difficult moment.

“We had a great start to the campaign as we got some wins and some points on the board early,” explained Dean, referring to a stellar start to the 2018/19 campaign.

“Obviously, of late, we’ve not picked up the results we wanted so we needed to get back to the drawing board.

“It’s about self-belief, really. Believe in what you’re told to do and the way we want to play, and we just have to keep going. We know we’re a good team, we’ve proved that at the start of the season. We’ve got a lot of players that have played at a higher level, so fingers crossed we can get out of this run as soon as possible.”

Dean says the Grecians must retain their self-belief

As a player who came through the ranks at City before making his first team debut back in 2003 against Accrington Stanley in a 2-1-win, Dean has seen many youngsters come through to try and make their mark in the first team.

But what does he think of the current crop of young Grecians trying to break into Matt Taylor’s side on a regular basis?

He continued: “They’re great young lads, of course, they come and train with us. Archie (Collins) has been with us for a while but Deano (Will Dean) has trained with us a few times and is pushing his way into the first team.

“Exeter has always been about trying to bring youth through and try and develop that. Matt has carried on what Tis (Paul Tisdale) was trying to do in giving young lads chances. It’s good and it’s what this club needs.

“Their attitudes are second to none, they come in and enjoy it, you can tell they enjoy it. They’re there to impress and they realise that with Matt in charge, and as well as under Tis, they’ve got a chance at this club, if they do well, they can break into the first team.”

Dean has worked under a number of managers during his career. He had two spells working under Paul Tisdale, first when the club won back-to-back promotions, but also on his return last season as City made it to Wembley.

The defender revealed that now working under his former teammate in Matt Taylor, only minor changes have been made to the setup at St James Park, and the City number 21 is enjoying life under a new manager and new coaches.

“There are little things that he’s (Matt) made his mark on but there’s nothing major. We do some similar sessions but it’s Matt’s take on it. Whatever Matty puts on for us we try and implement on a Saturday.

“He’s good, always talking to you, and he was like that as a player, he’ll talk to you if you need it. He’s got Greeno (Dan Green) and Eric (Kinder) as well, so it’s good and Wayne Carlisle has been involved in recent weeks too. 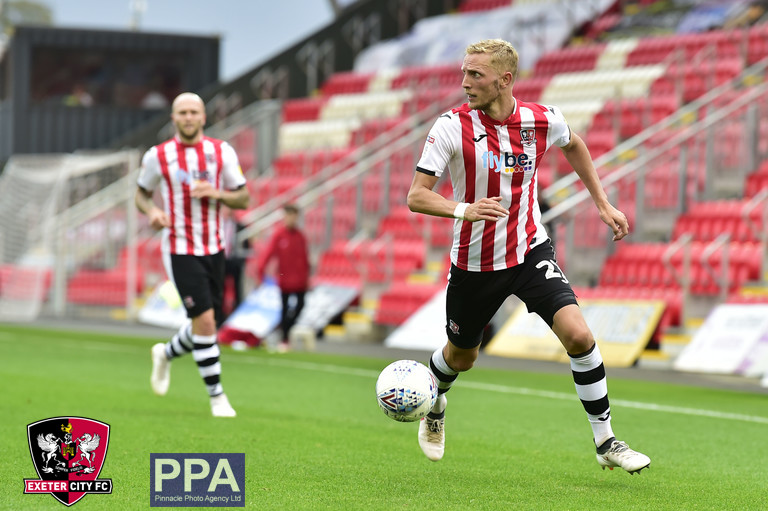 “There are familiar faces that I’ve worked with for a few years, but he’s come into his first job and done really well. He was captain towards the end of my time here, so you could tell he was always going to go into that sort of role as a coach or manager. It happened quick over the summer to appoint him after Tis left but he stepped up, he wanted the job, went for the interview and told them that he wanted it and it’s a great club to have your first job in management at.”

Since arriving back in Devon, Dean has been deployed in a number of different positions for City. Whether that be in his most comfortable left back spot and occasionally in midfield, but he has also filled in as a central defender- a position he has grown to quite enjoy.

He continued: “At first last year, not so much, but I’ve said it to so many people that I’m just happy to be out here playing and I’ll play in any position that I’m put. I had to learn quickly last year up at Notts County and they brought on Shola Ameobi and had Jon Stead up front. It was a hard game, but we came out on top and it was one of those where you never know, with injuries. I stepped in and enjoyed it against Peterborough.”

The Grecians are set to go into a big set of Christmas fixtures which sees them go up against Oldham Athletic, Yeovil Town and Grimsby Town before they see the new year in with a trip to Swindon Town. An experienced Dean is well aware of the importance of the Christmas schedule with lots of points up for grabs.

Dean scored his first goal of the season against Mansfield Town

He said: “This is a big stage of the season. We have got a lot of games coming up against teams that we feel we can beat. We feel we need to take a lot of points out of this month to stay in there, it’s going to be big for us to get points over this period, as hard as it will be.

“Less travelling is always good, you never know, as you see with Macclesfield anyone can beat anyone in this league. We’ll have to be on our best game to beat any team that comes to the park.

“It’s hard when there are so many games involved but it’s one of those where I’m used to it now. I’ve done it for so many years before so it’s second nature really. We’ll be in for training on Christmas day for the game on Boxing day.

“I’m used to it, some of the younger lads might not be but it is what it is. Everyone has their own recovery things to do and we’ll be in over that time, maybe there will be a little less training over that time because the games and then the recovery sessions, but it’s one of those when the games come you prefer to play the games than train, so you don’t really mind.”

A busy schedule over the next month or so could well have a bearing on how the Grecians finish the 2018/19 campaign. As always, there are sure to be more twists and turns between now and May, but with experienced pros such as Dean in the squad, no doubt City will be pushing as hard as they can to be back up there come the end of the season.