The Exeter City Foundation, which operates as a not-for-profit lottery scheme, has provided £22,500 to commission three new facilities adjacent to the 3G pitch as the Cliff Hill training ground continues to be developed.

The new setup sees provision for changing rooms, a toilet/shower block and refreshment facilities. Since its installation two seasons ago, the 3G pitch has proved a great resource, allowing training to continue during bad winter weather, as previously City’s playing squads had to use facilities at Exeter University and elsewhere across the city. The pitch is also used by the academy, the ladies teams and other local sides who can hire it when available.

The infrastructure will be used to support a wide range of users of the 3G pitch, reducing the need to head to the main building at the other end of the site.

Ruth and Paul Lawrence (pictured in lead photo alongside foundation organiser Richard Horne, Chris Weale and Dan Green), who have just won £1000 through the Foundation, took a trip down to the training ground to take a look at the new facilities as well as meet goalkeeping coach Chris Weale and under-23 coach Dan Green. 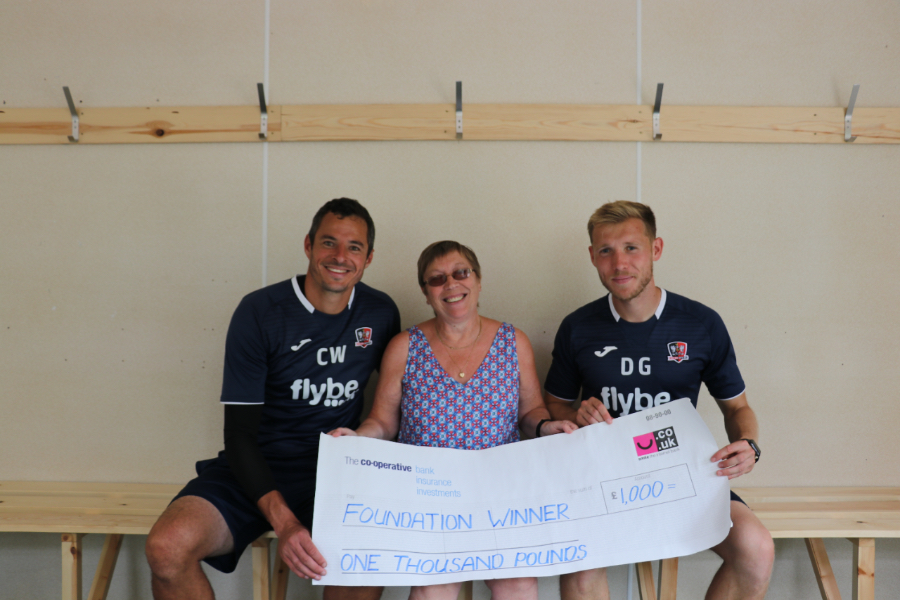 Richard Horne, who is the Foundation organiser, says he is delighted that the organisation could make such a contribution to help with the off-field development of the football club.

He said: “People have been putting money into the foundation over the years and it’s important that we are clear that the money is put to good causes. This is something that helps all aspects of the playing side of the club and it’s a facility that makes the 3G pitch more usable.

“The Foundation has been running for about 10 years, it started off before my time under a different name. I’ve been running it for about five years now. The important thing is that members can see that surplus money is being put to good causes and put to helping the club and I think that’s what they want to see.

“We will all use the facilities. It’s nice to have it down here away from the main block and it enhances what is already a good facility for the club.

“People get a little bit confused between the Trust and the Foundation. The people who join the Foundation pay their money and they have an opportunity of winning prizes through the season. It’s not only financial prizes, we’ve also got what we call ‘money can’t buy’ prizes, which includes watching the first team train. It’s a really good deal, all of the members are Exeter City supporters, so you know that money is being channelled back to somebody who supports the club. We then put the surpluses to good use, like we’ve done here."