Jordan joined the Lancashire club on a four-year deal having impressed in the City first team last season – making 17 appearances as the Grecians booked their place at the SkyBet League Two play-off final for the second season in a row.

Despite being well-known and loved by City supporters, Jordan is somewhat of an unknown quantity to fans of Preston and many enquired about his ability on Twitter. Not surprisingly they received rave reviews from our fan base who wished the 20-year-old defender all the best at his new club.

“It is always nice to see that the fans support you and want the best for you,” said Jordan. “That is why Exeter is such a good club because they have got such a good and loyal fan base. It was nice to see the comments from them wishing me the best and saying how well I did for the club.

“I have got a lot of respect and time for Exeter City. I will definitely be keeping an eye out for their results and wishing everybody there the best.” 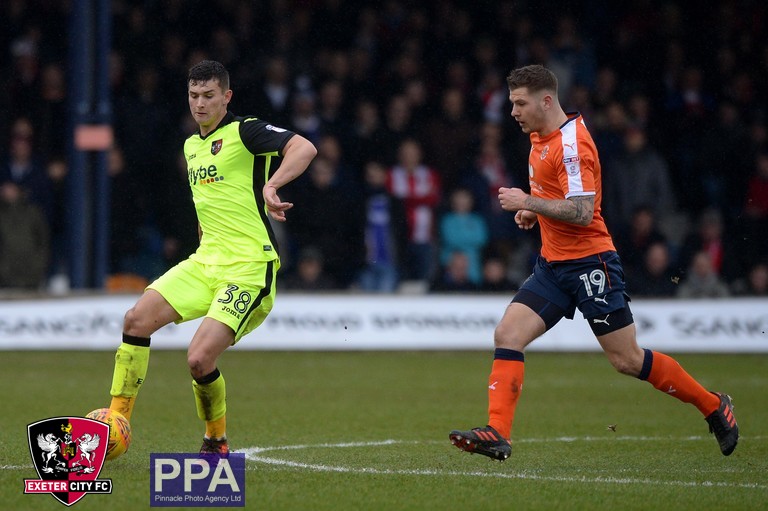 It has been a bit of a whirlwind five months for the Somerest-born centre-back as he only made his full debut for City away at Kenilworth Road in February.

“To be fair it has gone better than even I could have imagined,” said Jordan. “If someone had said at the start of last season that I would have been playing at Wembley, I wouldn’t have believed them at all. So, from my perspective, it has gone tremendously well. It has been great.”

So what have the keys to Jordan’s success been and what advice would he give to other youngsters on the fringes of the first team squad?

“When I broke into the first team I just tried to give it my all,” said Jordan. “I wanted to do as well as I could not just for myself but for the team as well. That is what I set out to do and to try and cement my place in the first team and build from there.

“I think you have got to train every day with intent because the coaches are always going to be keeping an eye on you.

“Every little thing you do is being monitored so you must not feel like it is not. The reserve games and everything else, it all matters. They are all going to help you improve as a player. So, even when things are going your way, you have got to put in the graft because everyone is taking note and it may take some people longer than others to get where they want but over time it will be worth it.”

“I think those loan spells helped me massively, especially for League Two as it is a very physical league,” he said. “Playing in the lower leagues against big men and doing the dirty side of the game well, trying to win every header, every tackle and every clearance, set me in really good stead for the games I have played. It has been massive for me.

“I can’t wait for the Championship season. It is going to be a good test for myself as well and, hopefully, I can excel in the league.”