With the 2018/19 season fixtures being announced this week, we’ve decided to take a look back at some of the standout matches from the 2017/18 season.

Although, ultimately, the season ended in disappointment at Wembley for City with defeat in the play-off final, there were many standout moments under Paul Tisdale as he guided City to 24 league wins which was his season’s best during his 12-year stay at St James Park.

The Grecians came up against Cambridge United in the opening day of the 2017/18 season at St James Park as they made a winning start to the campaign. In what was a tough test against Shaun Derry’s side, City came out on top with the only goal of the game coming when the season was just five minutes old courtesy of Reuben Reid, who initially saw his penalty saved, before firing home the rebound. 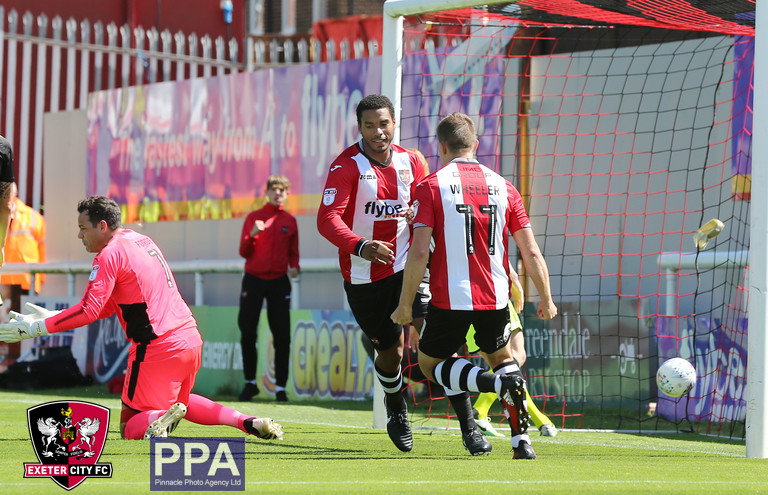 After 12 minutes many City fans may have been feeling that they were about to see the Grecians fall to defeat in the league for the first time that season. But a stunning comeback saw to it that it would be City who would walk away with three points. After Kevin Dawson netted twice, the Grecians pulled one back through captain Jordan Moore-Taylor, who curled a sublime effort into the far corner from a free-kick before Reuben Reid levelled things in first half added time. An exciting second half then saw City go ahead with Reid notching his second of the afternoon from the penalty spot, before Jake Taylor added a fourth for the Grecians after some superb play. Dan Holman netted again for Town in injury time, but City held on to see out a thriller at Whaddon Road and claim all three points. 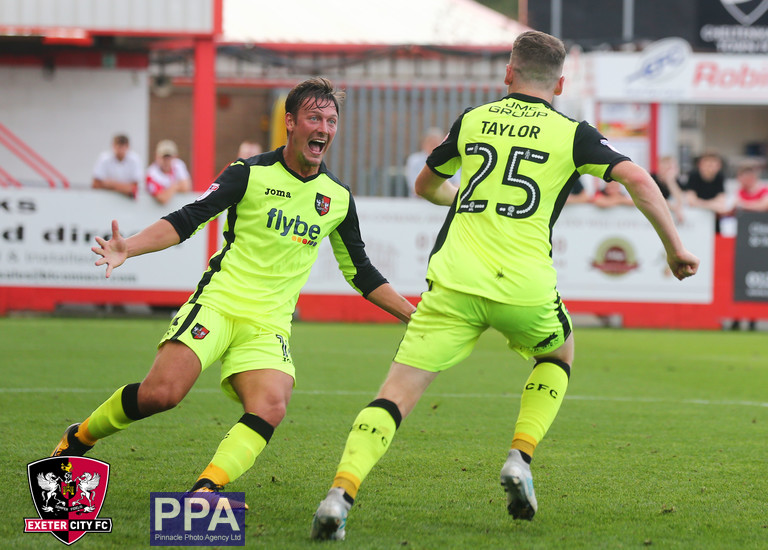 In another comeback win for the Grecians, this match saw Jayden Stockley net the first of his 25 goals for the season against Barnet. City fell behind in the second half after Shaquile Coulthirst fired in from close range before City levelled things through Reuben Reid just 12 minutes from time. The Grecians may have felt that a point against a Barnet side who had applied a significant amount of pressure on them would have been a good result, but they went one better and snatched the win four minutes into injury time courtesy of Stockley who slotted the ball in at the far post to send City fans home from the capital delighted. 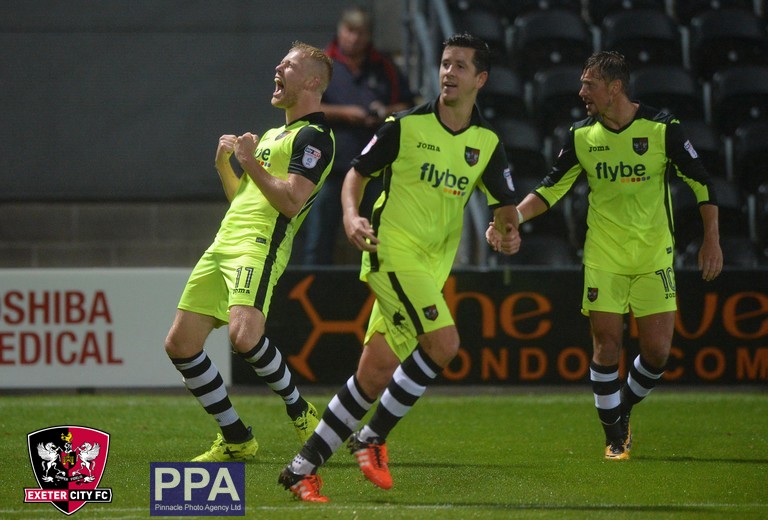 The FA Cup third round is, of course, a round to look out for as the Premier League sides enter the competition. After beating Heybridge Swifts in the first round and seeing off Forest Green Rovers with the help of a replay, City then faced West Bromwich Albion. With an attendance of 5,638 at St James Park it was the Baggies who were the more clinical as early goals from Saloman Rondon and Jay Rodriguez did the damage for the away side. Despite a more than spirited display from the Grecians in the second half, who created some good opportunities to get themselves on the scoresheet, it wasn’t to be as Alan Pardew’s side claimed a place in the fourth round. 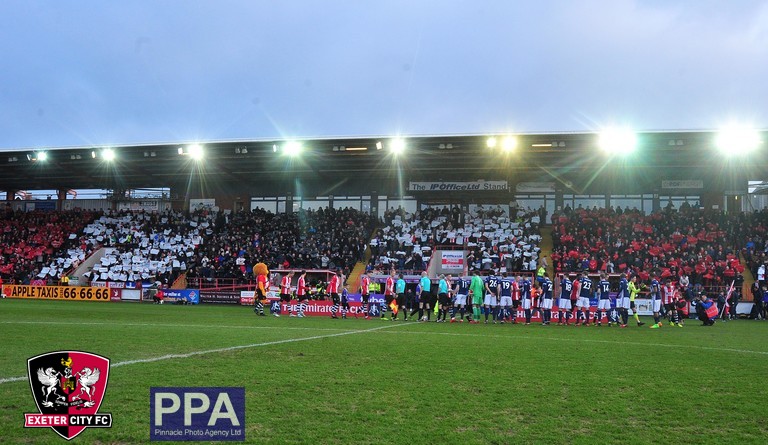 A remarkable night in Cheshire saw fans looking towards the exit door in the 87th minute after a match of relatively minimal chances in a game which seemed destined to remain goalless. But if ever there was a reminder as to why not to leave early, then this was it! The home side thought, surely, they had snatched a victory in the 88th minute when Shaun Miller despatched coolly for David Artell’s side, but captain Jordan Moore-Taylor and co had other ideas. After City did well to keep the ball alive and play it back into the Crewe box, Moore-Taylor was on hand to thump an effort home to level things in the second minute of injury time. Not a team to settle for a draw, though, City pushed for a winner and it came in the fifth minute of added time when Lee Holmes delivered an exquisite cross onto the head of Stockley who nodded in to send the travelling City fans wild. 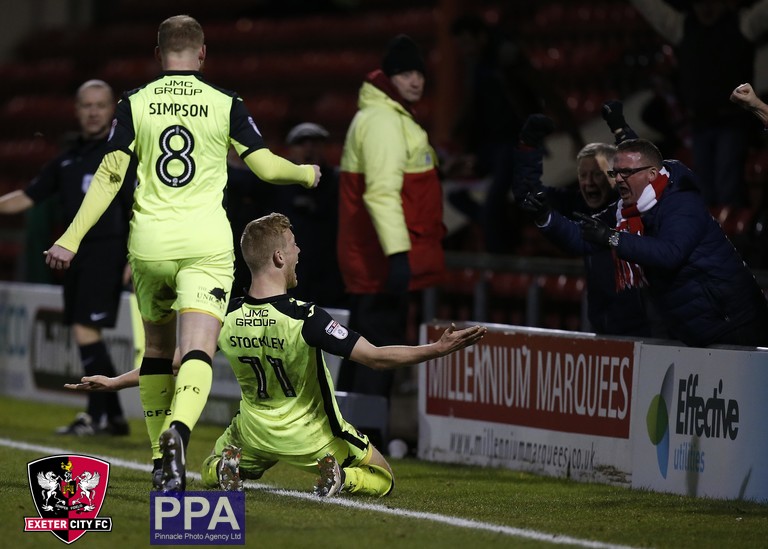 Another scintillating match involving the Grecians, and another where they showed a great deal of character to fight back. A difficult first half saw the home side take, perhaps, a deserved lead into the break after Jabo Ibehre netted. But Jayden Stockley headed home from Hiram Boateng’s cross to bring City level. A wonder strike from George Maris then put the home side ahead again before Matt Jay popped up to prod the ball home to make the score 2-2 in the 84th minute. And three minutes later the Grecians were ahead when Jake Taylor struck just three minutes from time to seal the win. 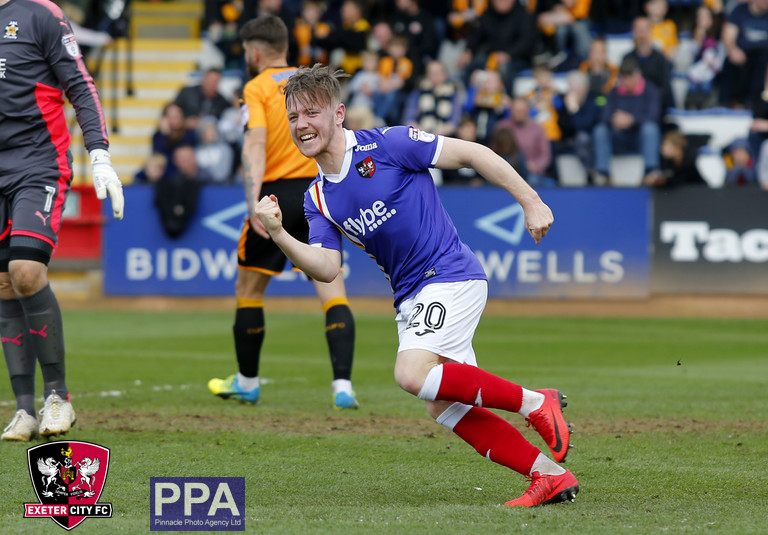 With the image of Jack Stacey’s winner against Carlisle United in the play-off semi-final the season before still fresh in the memory, it was another special evening at St James Park in front of the TV cameras. With the tie delicately poised at 0-0 from the first leg with Lincoln City, the Grecians turned it on as they ran out 3-1 winners over Danny Cowley’s side. Jayden Stockley’s excellent volley put City ahead before wonderful individual efforts from Hiram Boateng and Ryan Harley sent City to Wembley. 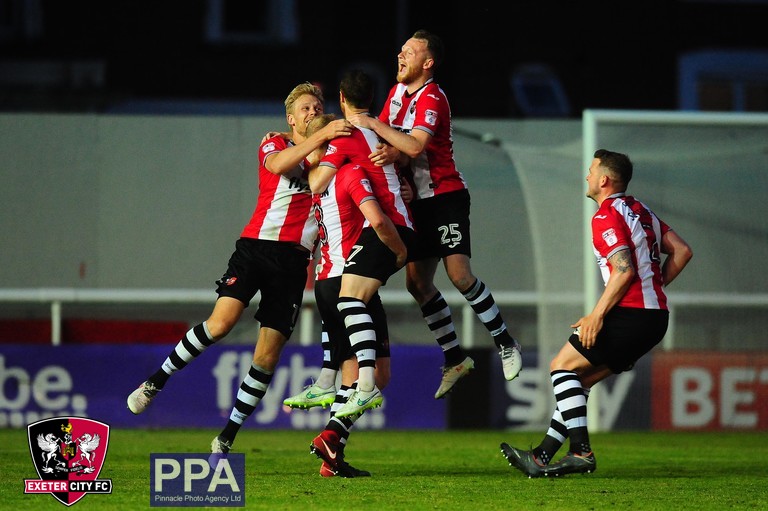 As new manager Matt Taylor prepares his squad for the opening day of the 2018/19 campaign, find out who City will face on Thursday from 9am. 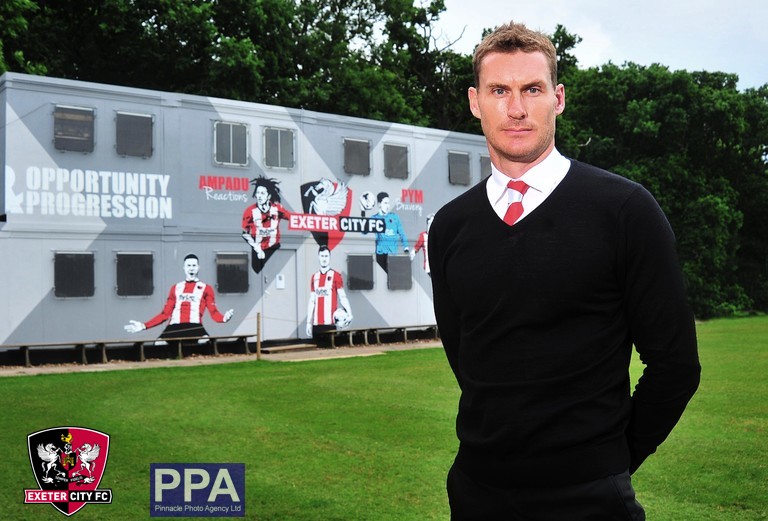