Exeter Comedy Grove returns to St James Park on Friday, May 25 featuring another four fantastic comedians that are all part of the UK comedy circuit.

Comedy Groves feature the very best in live comedy from comedians that have performed at some of the biggest comedy clubs in this country and abroad.

On the bill for Friday, May 25 is Lloyd Griffith, Barry Castagnola. Riordan DJ and your MC Cerys Nelmes. Doors open at 6:45pm for a 7:30pm start with tickets just £10. Tickets can be purchased by clicking here.

The night is expertly hosted by MC Cerys Nelmes. Cerys is in the new series of Trollied on Sky 1, and can also be seen popping up on Casualty, Stella, Back, The Coroner, Thirteen, Ill Behavior, Galavant and The Rack Pac.

Opening the night is Lloyd Griffith, host Of Soccer AM. Lloyd is a comedian, a choirboy and an aspiring goalkeeper. He’s the co-host of Soccer AM on Sky Sports every Saturday and is also the face of BBC3’s Taxi to Training.

Lloyd's just completed supporting Jack Whitehall and Rob Beckett on their respective sold out UK tours including dates at Liverpool Echo, Newcastle Metro, Manchester, Leeds and Wembley Arenas and Hammersmith Apollo. Lloyd has just extended his first UK tour into 2018 and the success of the tour in 2017.

Next up is Riordan DJ, 2017 student comedian of the year. Originally from Exmouth, Riordan studies medicine at the University of Bristol and in his act blends observational comedy with surreal one liners.

Your headliner for the evening is Barry Castagnola. Actor, writer and comedian Barry has firmly established himself as an accomplished comic performer. He has been performing stand up round the country and internationally for over four years. He started off by blagging his way on to the stage at the Comedy Store in Los Angeles and has never looked back.

Doors open at 6:45pm for a 7:30pm start, with seating first come, first served. Tickets are priced at just £10 with no booking fee, and can be purchased by clicking here.

Please note - line up is correct at time of posting and may change without prior notice). 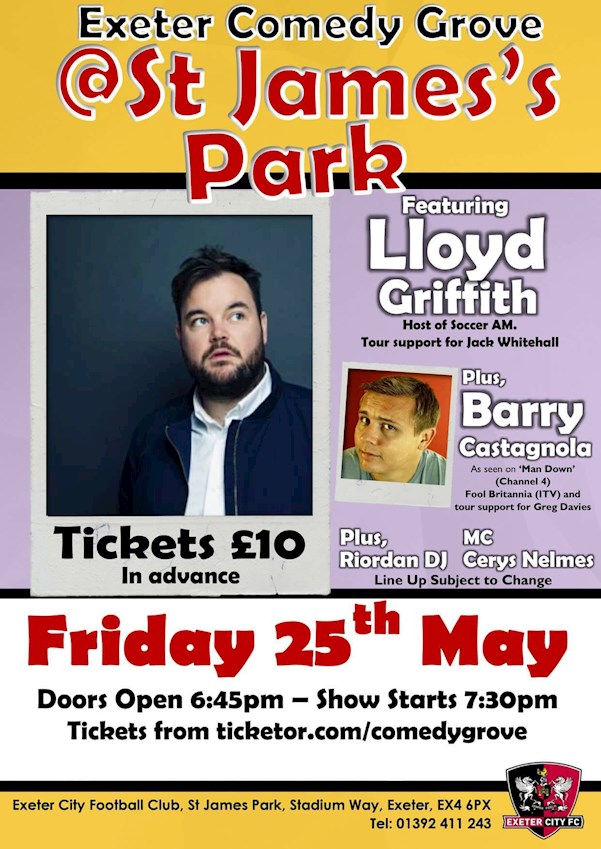