Exeter City striker Jayden Stockley says he is “enjoying his time” with the Grecians as they go in search of a successful season.

Jayden, who was the club’s top goal scorer last season and currently leads the way so far this campaign with eight goals, is in good form and has been a key member of Matt Taylor’s squad in their positive start to the season.

Speaking ahead of City’s match with Swindon Town on Saturday, Jayden is pleased with how he has begun the season with the Grecians as he hopes to keep firing to ensure his side retain their place towards the top of League Two.

He said: “It’s been a good start. It’s early days in the season but I’m happy with that return so far (eight goals.)

“I’ve had a lot of chances and I think I could have even more this season with the balls that have been put in for me. Hopefully, they can keep on coming and the boys can keep on producing the brilliant attacking play like they are, and keep things assured at the back. I’m really confident and I’m enjoying my time so much here.”

Jayden has been in the spotlight this week with statistics showing he is the highest league goal scorer in 2018 so far across the top four tiers of English football (Premier League, Championship, League One and League Two), an achievement the striker is pleased with and wants to continue to build on.

“I’m not sure how many Harry Kane would get in League Two, maybe triple figures! My friend said that to me the other day and it’s quite funny to see. I’m happy with that at the moment, considering I’m not on penalties either. 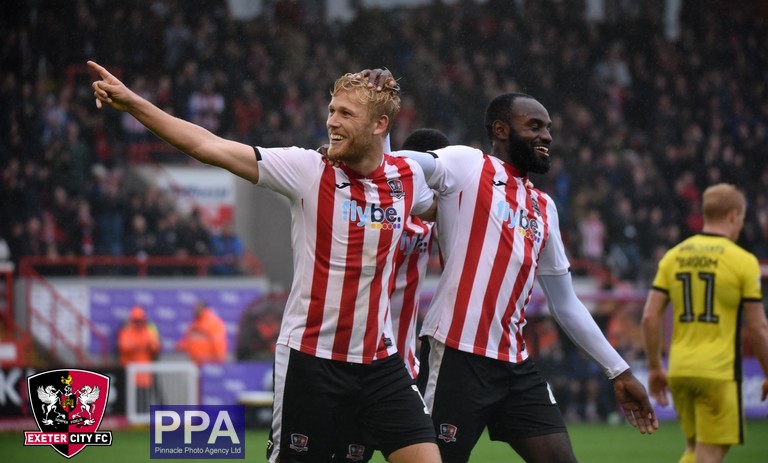 Jayden is enjoying playing alongside his City teammates

“It would be cool to finish the season like that, it would be a nice thing to look back on, but there’s a long way to go yet. Kane or Mohammed Salah could score about 40 goals this season.”

Having impressed on a number of occasions at St James Park so far this season, the City forward also credited his teammates for the service they have provided him with going forwards.

“They’re brilliant, and so creative. Whether it’s in training or a match you have to be in the right areas of the pitch and rely on it to come in. You can’t go looking for the ball out of your area, and I’ve got so much faith and trust in them that they’re going to find me.

With the signing of Jonathan Forte, who has helped himself to five goals so far this season, the pressure has somewhat eased on Jayden to provide the goals for the Grecians, and after the arrival of the former Notts County man, Jayden believes he can thrive alongside his new strike partner.

He continued: “He’s really good. Some of the runs he makes are perfect, he takes defenders with him which frees me up.

"It’s brilliant to have him, the experience he’s got and he’s a great finisher. He’s a big guy as well and he can shift, I just wish that I could shift as fast as him, I don’t know what’s in my genes because my dad was the slowest person in the world, so I’ve caught that from him. I wish I had an ounce of pace like Jonathan, but it’s great to play with him."

Looking at the bigger picture, Jayden also believes the side are in good shape going into the match with Swindon on Saturday.

He continued: “We’re feeling good, we’re looking forward to playing back at home, especially with the way the stadium is looking after the work in recent months.

“It’ll be nice to play in front of four stands, it looks smart down there now. It comes off of what was probably a disappointing point in the end against Yeovil, so we are looking forward to improving our home form and keeping the wins coming at home.

“We’re confident, the lads have had a good week’s training, with a couple of days off. It’s nice to be relaxed going into the weekend.”

Despite the squad being on a high at the moment in terms of the league table, Jayden was also quick to warn that Phil Brown’s side will travel to Devon with an intent to take all three points, and they possess some dangerous players.

“They’re a good side, with a good manager who has got experience at this level and above,” explained the City striker.

"He (Phil Brown) is going to set his team up right and it’s down to us to focus on what parts to play on and hopefully that goes well on Saturday. They’re a big team in our league with big aspirations for the season, and we’re in and amongst that as well. We’re second in the league now and we have to push Lincoln City who are above us.

“It was a good game at St James Park last year. We came out winners, but it was a good game of football with both teams wanting to play. We scored a brilliant goal with the amount of passes we put together, but it’s up to us to continue our good form and be the team on the front foot and excite the fans.”