Exeter City will be looking to continue their good run when they visit Crawley Town on Tuesday night.

The Grecians came agonisingly close to all three points in a 0-0 draw at Grimsby Town last weekend, but had to settle for a point after Pierce Sweeney had a second half penalty saved.

Crawley come into the tie on the back of a 4-1 demolition of Newport County. Here’s all you need to know about the hosts…

Despite being founded in 1896, the Red Devils have enjoyed the large portion of their success since the turn of the century.

The 2010/11 season represented their greatest success to date after winning the Conference and entering the Football League for the first time in the club’s lengthy history.

Crawley then went from good to great, as they finished third the following season and earned promotion to League One as a result. In the proceeding seven years, the Red Devils have been a mainstay in professional football.

Crawley’s Italian manager applied his trade largely in the lower leagues in Italy, before sampling Serie A and B respectively with Torino, Ascoli and Mantova.

The domineering centre back’s first foray into management came with Italian side Gavorrano in 2013 and then enjoying a five year managerial hiatus, before taking the reigns of Crawley in September this year.

Keeping in touch with the club’s recent success, the Broadfield Stadium has been home to Crawley just before the turn of the century in 1997.

After joining in the summer from non-league side Hendon Town, Nathaniel-George has made a notable impression on the wing, scoring three goals.

Exeter will have to look out for the 23 year-old who has converted 33% of his shots on goal and averages a goal marginally above every other game.

The Red Devils have been fairly inconsistent in recent weeks with three wins and two defeats, but have come straight off a 4-1 victory against Newport County and are just outside the play-off zone courtesy of goal difference.

However, Cioffi’s side have won their past five home games and are undefeated in six, making Tuesday’s game a tough match for the Grecians.

Crawley got off to the worst start imaginable, losing their opening three games and were firmly rooted to the foot of the table as a result.

With just seven wins before Christmas, the Red Devils loitered dangerously around the drop zone, but the new year coincided with a remarkable turn around. Eight wins from January to February followed as Crawley propped up to the table and settled for a midtable finish.

A defining moment in Exeter’s season saw them fail to capitalise on results going their way elsewhere. A win could have seen them rise into the top three with two matches remaining. 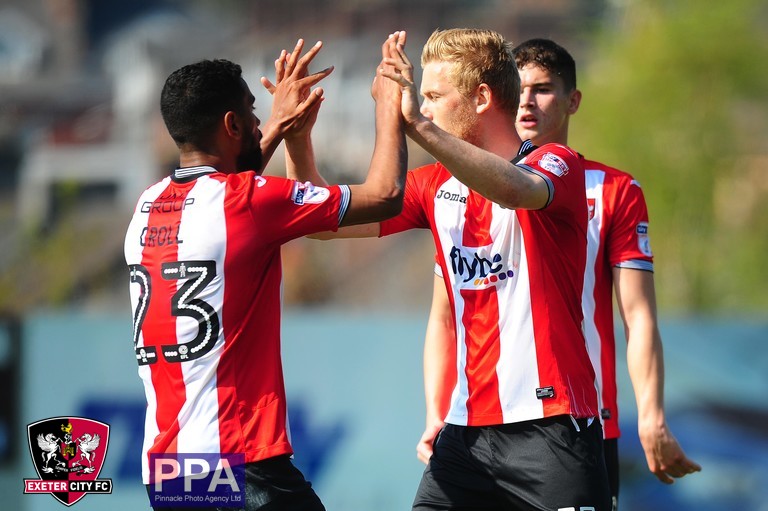 However, Jayden Stockley’s double proved insufficient for all three points as they were pinned back by a Josh Yorwerth second half leveller.

The Grecians suffered a shock defeat at the Broadfield Stadium, as Josh Payne and a second half Jordan Roberts double gave the home side the win following Dean Moxey’s opener.

The defeat for the visitors saw them fall four points off the automatic promotion spots, as they remained fourth. Meanwhile, Crawley alleviated some relegation pressure as they rose to 17th.