Exeter City will be looking to return to winnings ways and extend their unbeaten run when they host Stevenage on Tuesday night.

The Grecians dropped two points in the cruellest of fashions after a 97th minute leveller saw them share the spoils in a 1-1 draw at Port Vale.

The clash sees third take on fourth and could see Exeter edge closer to 1st place Lincoln City, while Stevenage could move into the automatic promotion spots with victory.

When it comes to British professional clubs, Stevenage are very much in their infancy after being founded less than 50 years ago in 1976.

The London-based side, nicknamed ‘The Boro’ having previously been known as Stevenage Borough FC, renamed simply as Stevenage after reaching the Football League.

Their most notable achievement to date are back-to-back promotions in 2009 and 2010 as they reached the Football League and then League One in 2011.

Tunisian born manager Maamria has been a mainstay in English football ever since his arrival at Burnley in 1996 even though a lengthy injury curtailed his time at the club.

The former striker’s fortunes soon turned after a transfer to Doncaster where he started to cut his cloth as a Conference level player.

The 46 year-old had three separate spells at the club before assuming the managerial reigns this year.

The Stadium formerly known as Broadhall Way, became the home of first Stevenage Town in 1961 and then Stevenage Athletic before the club disbanded. In 1980, Stevenage FC became the tenants which they have remained until this day.

With a capacity ground of 6,722 a fourth round FA Cup tie in 1998 against Newcastle United saw the highest ever attendance at the ground with 8,044.

A poster boy of the clubs youth academy, Ben Kennedy is one to fear for opposition defences having racked up over 100 appearances for the club. 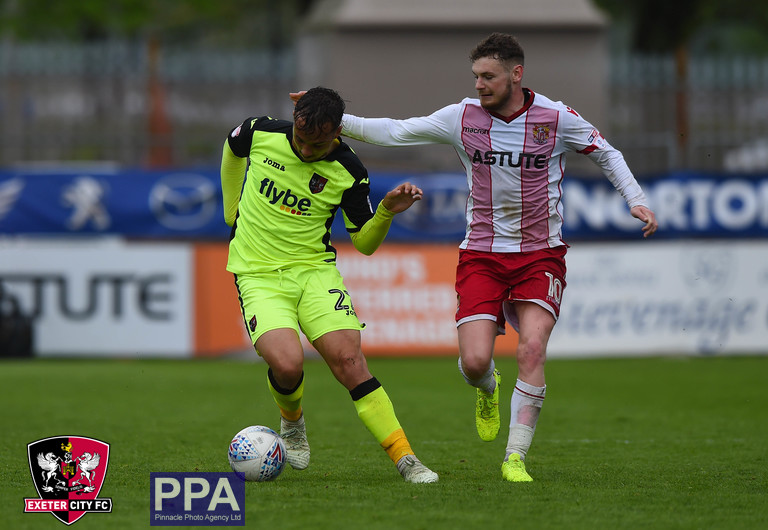 The 21 year-old Northern Irishman has scored over 20 goals for the Boro in his fledgling career at the club so far.

Goals may have come at a premium for Stevenage, registering just 12 goals in 10 games, but a resolute defence has still pitted them against the table-topping sides as they sit in 4th.

The Boro has won five games this season - four of which being 1-0 wins - and they are undefeated in their past four games with three wins and a draw.

Stevenage got off to a flying start in League Two and sat in 2nd place after five games and kept up their promotion hunt well into October after a dramatic 3-2 win at home to eventual champions Accrington Stanley.

The Boro soon laboured as the season wore on and manager Darren Sarll was dismissed. Maamria joined in March to steady the ship with a respectable 16th place finish.

A demoralising 3-1 defeat at the Lamex Stadium ended Exeter’s promotion hopes in late April, as they were undone by a Alex Revell hat-trick.

Pierce Sweeney managed to reduce arrears with a confidently struck penalty in the 78th minute, but that proved no more than a consolation.

Goals from Lloyd James and Pierce Sweeney propelled the Grecians into the automatic play-off spots with a well earned victory.

Matt Godden pulled one back for the visitors late on, but that proved to be in vain.