A brave, old school defender who never shies away from a tackle, Troy Brown came up through the ranks at Fulham, joining the West London club at the tender age of seven.

Having broken into senior football under the tutelage of Roy Keane at Ipswich Town, he enjoyed spells at Aldershot and Cheltenham Town before arriving at St James Park in July 2015. A key presence at the heart of City’s defence, he is now entering his fourth season with the club.

9 – A bright talent in his youth, Troy was capped at age group level by Wales, making his first foray into international football during a 2-2 draw against the USA’s under-17s in April 2006. Part of a talented cohort that included Aaron Ramsey, Jonny Williams and fellow Grecian Jake Taylor, he worked his way into the under-21s’ squad, going on to make nine appearances.

115 – A former Robin, Troy was highly rated during his time at Whaddon Road. Unfortunately, however, he was unable to arrest the club’s slide down the League Two table. Following heart-breaking relegation in May 2015 with Cheltenham, he made the move 115-miles down the M5 to St James Park, joining Paul Tisdale’s men on a free transfer. He would make his debut on the opening day of the 2015/16 season, helping City to beat Yeovil Town 3-2.

62 – Not just a calming influence at the back, Troy also proved himself lethal from close range, finding the net for the first time on just his fourth appearance in red and white. With the clock having just ticked past the hour mark and the Grecians leading Dagenham & Redbridge 1-0, he nodded home a Lee Holmes’ corner. His goal ultimately proved crucial in securing an important 2-1 win over the Daggers.

90 + 1 – Arguably, however, Troy’s most important intervention for the Grecians came midway through his second season. Fighting for a play-off place, the Grecians found themselves 3-0 down at home to Yeovil Town. With all seeming to be lost, David Wheeler lashed in a shot off the post in the 88thminute. Mayhem ensued, with Troy heading in a second a minute into added time. Then, just a minute later, Reuben Reid smashed in a Jack Stacey cross to complete one of the most famous comebacks in the Grecians’ history. 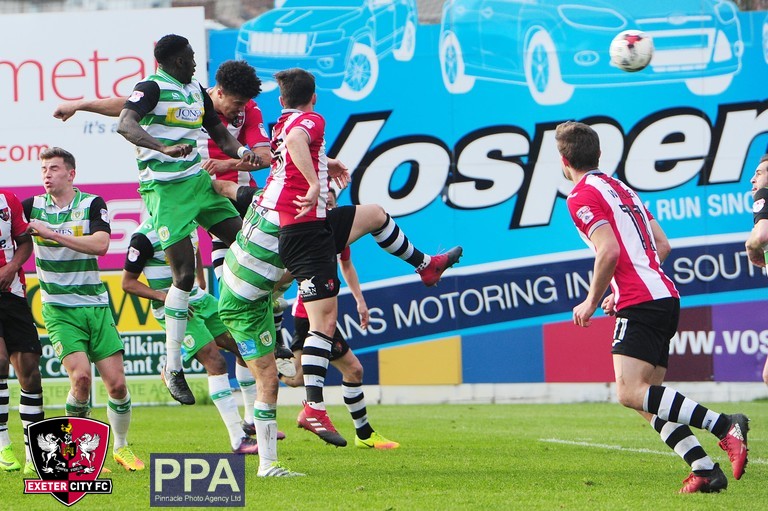 100 – Much loved by the Exeter faithful, the combative centre half made his 100thappearance for the club in November 2017, when St James Park played host to Heybridge Swifts in the first round of the FA Cup. It proved to be an all-round happy affair, with a Jayden Stockley brace, alongside a late strike from Liam McAlinden, seeing City run out 3-1 winners.

28 – Unfortunately, however, last season proved to be one of Troy’s most difficult in a Grecians’ shirt, with injuries restricting the 27-year-old to just 28 appearances. Having struggled with a couple of niggles, his season finally came to an end on St Patrick’s Day following a 2-1 defeat away at Morecambe.

1 – True to form, however, he bounced back at the start of this season, beginning the campaign in excellent form. This included a vital goal against his former club, Ipswich Town, in the EFL Cup. With the Grecians trailing to a Kayden Jackson strike, Troy stood tall in the 64th minute to nod home a flick-on from Jack Sparkes. City went on to beat the Championship side 4-2 on penalties. Although he is currently side lined with another niggle, Troy will be hoping to return soon and continue his sterling run of form.