If you were to ask a footballer what their biggest worry is in terms of their career, you could wager that injury is probably towards the very top of the list.

But unfortunately, injuries are part and parcel of the game and every player will spend time in the treatment room at some point in their career.

But it’s that road to recovery from injury which is key. How a player can bounce back from a setback to get themselves onto the pitch once again. You could forgive a player for asking themselves: What if I can’t get back to my best? Or what if the manager buys someone else to replace me?

It’s an injury that you wince at when you hear it. Snapped achilles tendon. As soon as it’s confirmed then it’s inevitable that the sufferer is set to spend a sustained amount of time on the side line.

And in Aaron Martin’s case, he suffered the horror of that injury when playing for Oxford United in an Emirates FA Cup match with Macclesfield Town in December 2016. The central defender was in good form for the League One side and it left former boss Michael Appleton disappointed for him after he had turned out some excellent performances.

“I’m gutted for him because he’s worked so hard to get into a position where he was pushing Chey (Dunkley), Charlie (Raglan) and Curtis (Nelson) really strongly to get in the starting line-up. For that to happen after his last couple of performances is a real shame,” said Appleton following the injury.

After the long recovery and the process of proving his fitness, Aaron then endured a frustrating time at the Kassam stadium last season. Change in management and irregular selection saw to it that he would have to depart the club to reignite his career.

Now he has found himself a place where he is loving his football again. A move to Devon with his partner and young child, it seems Aaron is enjoying his fresh start at Exeter City- and that’s more than showing on the football pitch.

“I’m really enjoying it at the moment,” says Aaron as he sits down at the Cliff Hill training ground following an intense training session. 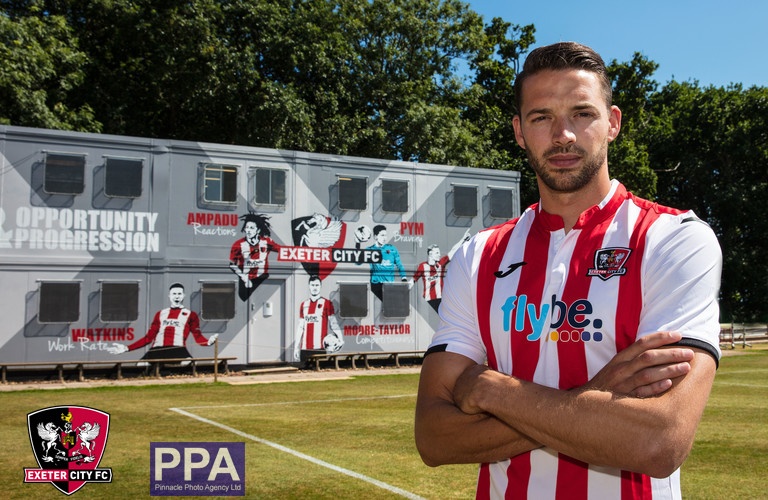 “I’ve settled in and it’s really good to get back playing and be doing well again, I’ve really enjoyed it.

“It’s nice (Devon), I didn’t really know what to expect because I haven’t been down here that much over the last few years, but I love it, my partner loves it and so does the little one.

“It’s the best feeling ever (to play regularly.) It was really frustrating at Oxford with my injury and then being in and out of the team so it’s nice to come in here and hit the ground running. Hopefully, I can play as many games as possible this year.”

Often a happy player off the pitch will see good form replicated on the field, and Aaron is certainly producing for the Grecians. 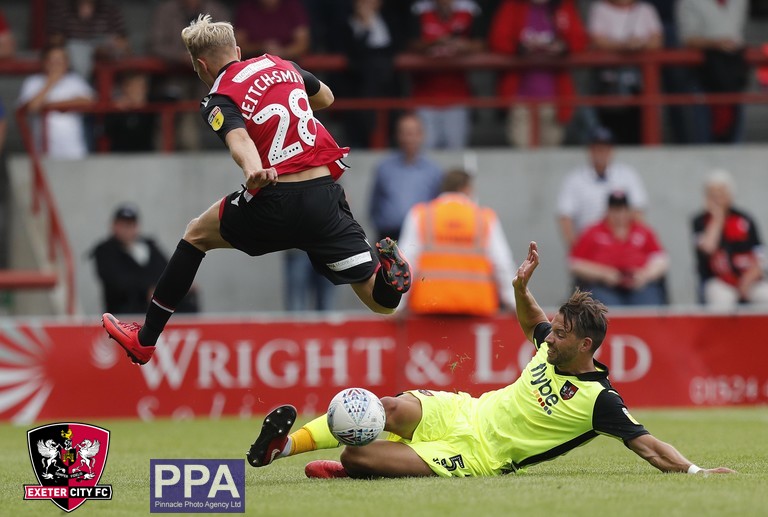 With the departure of an experienced player who knew the club inside-out in Jordan Moore-Taylor, as well as the immensely talented Jordan Storey who was picked up by Championship side Preston North End, the Grecians found themselves in need of a new central defender. A player who could accompany Troy Brown with experience, and quality, to help pick the Grecians up following play-off final heartbreak.

They’ve begun this campaign well under new management and there is great cause for optimism around St James Park. Under new boss Matt Taylor the Grecians have put points on the board early on in what is a new era at the club, and Aaron is one of eight new faces in the playing squad who seem to have taken kindly to life in Devon.

“I think everyone should be pleased,” said Aaron. “But it’s just the start and there is a long way to go and we need to keep at it now.

“It’s gone really well so far but I think there is still a lot more to come from me, as well as the team. Personally, I know I can still get better. I’ll just keep working tirelessly to get to where I, and the team, need to be.” 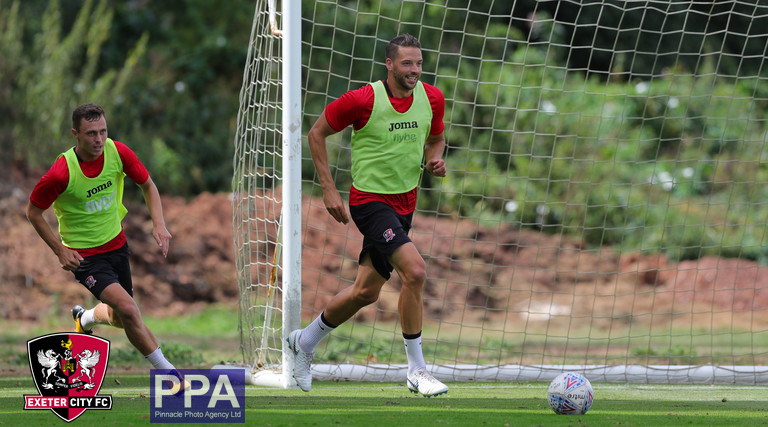 Aaron is all smiles at the Cliff Hill training ground

And whilst social media can be somewhat of a minefield for many footballers in the modern game, it’s nice to say that Aaron is experiencing the rather more pleasant side of things when it comes to City fans airing their views on the Grecians’ latest performance.

“Solid performance from ECFC tonight. Great Result! Aaron Martin has been phenomenal again!” reads one tweet. “Aaron Martin is a rock” reads another.

“They (the fans) have been excellent so far and I’ve enjoyed the praise that I’ve received from people on social media. It’s been a real pleasure so far,” smiled Aaron.

So, after dropping down to League Two, and now Aaron has had time to get to know his City teammates, what does he make of them?

He explains: “I’ve been so impressed with the whole squad. There are some really outstanding players here and I think that’s testament to what Matt (Taylor) has seen and brought in. Everybody is doing a great job.

In a recent post-match interview, following the 1-1 draw with Newport County, Aaron explained how he is enjoying a developing partnership with Troy Brown, and the 28-year-old was also paired with Dean Moxey in the centre of defence for the 2-0 win over Cambridge United.

Partnerships in football are often something key to a successful team, whether that be a threatening strike partnership, or in the centre of midfield, and no less in the middle of a defence.

Aaron believes, though he and his fellow defenders have put in some good performances of late, there is still work to be done.

He continued: “You just have to keep playing with each other. The more games you play together then the more you learn from each other and then the better the partnership gets. It’s been nice that it’s gone well so far, and like I keep saying, it’s just the start so we need to keep going as much as we can.

“He was brilliant (Dean), he’s really good to play with and he slotted into the centre of defence really nicely as well. It’s testament to the work we have been doing, we’ve been training extremely hard. Deano was brilliant against Cambridge.”

Aaron tasted success as a youngster with Southampton as the Saints won successive promotions to the Premier League. Turning out for the likes of Birmingham City, Coventry City and Oxford has given him experience of football at a higher level. And it’s clear that, after finding full fitness, he is hungry for success with the Grecians and he believes that there is more than enough capability within the City ranks. 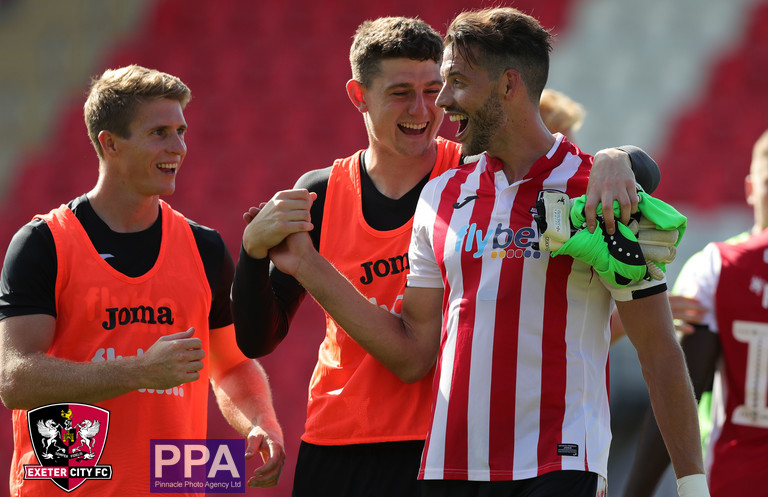 Aaron celebrates after a win on his City debut

“I think the goals that we’ve scored so far have been outstanding,” explains Aaron. “I think our will to win is going to be the biggest thing this year. Obviously, there is the individual talent that we have in the squad and you can clearly see that the players we have here have played at a higher level. Hopefully everybody can bring that together and push us up.”

Aaron arrived as Matt Taylor’s first signing as a manager in the summer, and even prior to working with the new City boss, Aaron believed he had made the right move- and that has been further consolidated after working alongside the manager on the training pitch, a man he can only complement for the work he has done so far.

“Matt has been outstanding to be honest,” explained Aaron. “He has shown more in his time being a manager than what I’ve seen from managers that have been managing for 10 or 12 years.

“He has great attention to detail and all the little things, he has been excellent.”

It’s clear that the Grecians have acquired a player who is hungry for success. A player who is relishing an opportunity to simply play football regularly once again following a frustrating period.

And it seems that as long as the 28-year-old maintains his fitness for the majority of the campaign then City fans have every reason to be optimistic that they have a reliable and consistent defensive unit.