Exeter City midfielder Hiram Boateng has praised the squad’s versatility as he hopes to help his side to three points in the league against Cheltenham Town this weekend.

After picking up two wins on the bounce the Grecians meet Michael Duff’s side looking to extend their winning run.

Hiram believes that the ability to change formations and the fact that players have come into the side and hit the ground running has been a big help in recent weeks.

He said: “I think the way people have come into the side when needed and done the job asked of them. There’s a good sense of togetherness between the boys which I think is the main reason why we have done well so far.”

Part of that change in shape has seen Hiram play further forward close to central strike Jayden Stockley, and despite being a little unsure at first, the midfielder has enjoyed his stint further up field.

“It’s been very different for me, explained Hiram.  “But I feel as though I’ve been adapting, but to be honest, I’m willing to play wherever it is for the team. 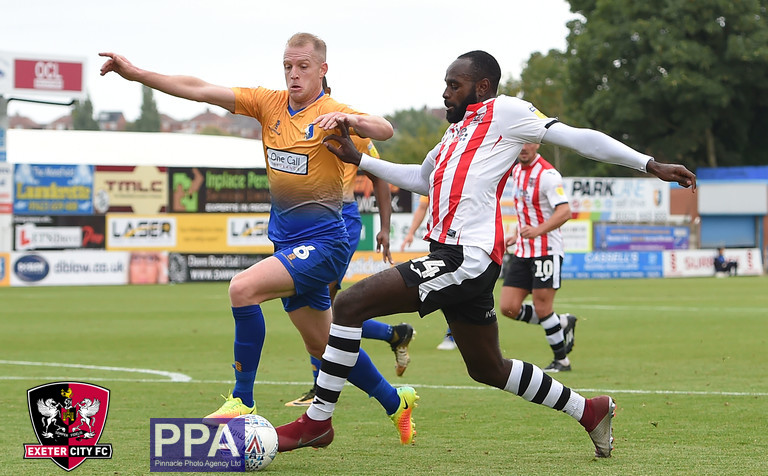 “As long as we’re getting the results that we hope to be getting then I’m happy. I wasn’t sure at first, but as time has gone on I’ve started to understand that position a bit more and I know the kind of runs I need to be making and what to do. Playing up with Jayden has made it easier because I know what he’s going to do and where he is going to go.

“It’s very important” (to be versatile.) I think it’s something that we carried on from last year, where a lot of the players knew how to adapt under different situations and formations.

"It’s credit to the new lads that have come in as well, they’ve come straight in and adapted which has been massive for us. All of them have been doing really well, I think even the lads who haven’t played as much so far, I get to see in training every day and they’ve settled really well. I’ve been impressed with all of them.”

But if the Grecians are to continue their good form they will have to navigate their way past a Cheltenham side who will be difficult to overcome, nonetheless Hiram believes the onus is on the home side to approach the game positively.

He continued: “We expect them to be compact. We’re going to have to break them down because we are at our place, we know our game plan and we know what we have to do, so I think if we stick to it then we’ll be fine.”