Wins over Notts County, Mansfield Town and Cheltenham Town in the league have put the Grecians second in the table, but manager Matt Taylor is expecting a difficult test in Neil Aspin’s side.

The City boss said: “They’ve made a decent start and have picked up some good results recently. They seem to have found a formula to play to and to win by. You go to Port Vale on a big pitch against a good opposition who will be firing right into you, it’s always going to be tough.

“Any time I’ve experienced Port Vale as a coach or a player it’s always been a difficult place to go.”

The match has been dedicated by Port Vale to promote the work of Fans for Diversity in tackling racism and discrimination in football.

On the day itself, the Port Vale supporters club will be giving away 300 bespoke t-shirts proclaiming, ‘Love Port Vale, Hate Racism’. The players will also be warming up in the t-shirts and there will be information about Fans for Diversity in the match programme and on the smartboard.

Although the message on the t-shirt is anti-racist, the campaign is much broader, and identifies the need to tackle discrimination in all its forms – whether it is based on race, religion, gender, sexual orientation, age or disability.

The club has a small amount of tickets to sell in person at the club shop/reception.

Grecian Travel: Departs Unit 1 nightclub at 8.15am. Other pick up points include: Honiton Road Park & Ride (by Miller and Carter steakhouse), Cullompton Services (junction 28), Tiverton (junction 27), Taunton (junction 25), any other pick-ups en-route by prior arrangement. For availability information please contact Chris Woolcott on 01392 250250

WHEN WE LAST MET:

The Grecians last met Port Vale last season on a Tuesday evening and ran out 1-0 winners in a hard-fought contest. The home side put City under considerable pressure at times, but a resolute defensive performance, and a Jordan Storey header were enough to seal the win. 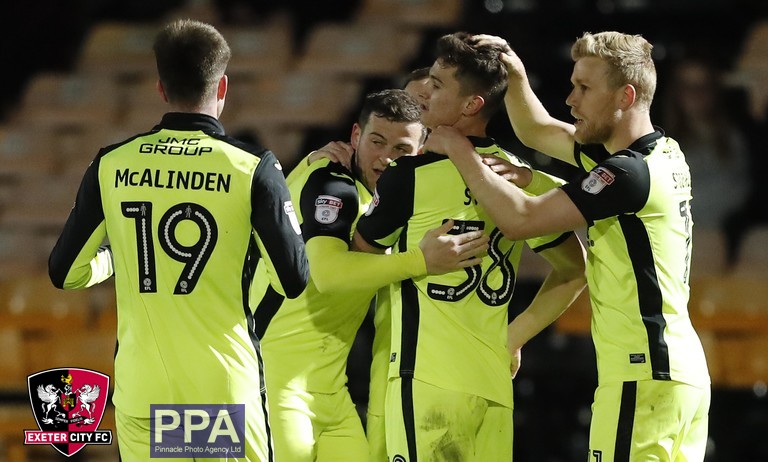 The capacity of Vale park is 19,052 and it is an all seater stadium renowned for its expansive pitch.

In the scale of League two stadiums, Port Vale have a large one with a capacity of just over 19,000. Only MK Dons and Notts County in League Two can boast bigger stadiums.

Vale Park opened in 1950 and unlike many English stadiums of today, can be credited with saying it has never undergone a name change for sponsorship purposes. Just 10 years after opening, Port Vale enjoyed their record attendance which is still true to this day when 49,768 fans packed into the ground to watch their team play Aston Villa in 1960.

PUBS/FOOD: The Bulls Head in Burslem town centre is a titanic brewery pub. With up to 10 real ales on the bar and 10 real ciders from the cellar at any one time as well as malt whiskies, Belgian bottled and draught beets. Also, just outside the away turnstiles is a club bar called the Vale social which allows all home and away fans in for free.

BY CAR: From Exeter the journey is just over 200 miles and takes around three and a half hours to get to Vale Park. Take the M5 to Birmingham before joining the M6 north before taking the exit for the A500. Follow the road before leaving for the A527 where you need to take the third exit at the roundabout. Shortly after you need to join the B5051 which you follow to Hamil Road where the stadium is located.

BY TRAIN: There are two train stations located which are recommended by Port Vale. Both journeys take between four and a half to five hours from Exeter St Davids. You can travel to Stoke-on-Trent’s main station, where you then have to catch a bus to Burslem town centre or travel by taxi (which should cost between £5-£10.) The journey requires at least one change at Birmingham New Street. Otherwise, you can travel to Longport via Birmingham New Street and Stoke-on-Trent to get within a 25-minute walk of Vale Park. Exit Longport station and then head onto Newcastle Street until you reach Burslem town centre with Hamil Road on the left-hand side.

Click here to find out all you need to know about visiting Vale Park.