If things aren’t quite going your way in a season, it’s often expected that the experienced heads step up and lead the way, and within the City dressing room it’s fair to say that Nicky Law can be included in that group.

A stellar start to the Grecians’ campaign in the league was halted with defeat to MK Dons which preceded a 3-0 loss at home to Lincoln City. That is, prior to convincing wins over Notts County and Mansfield Town as the Grecians bounced back in style.

There are players in the City changing room who carry a wealth of experience and know-how. Players and management that won’t be panicking or worrying if things don’t necessarily go to plan. People that will stick to their principles and retain the phrase: “There is a long way to go yet!”

Nicky Law embodies that spirit and has developed a great deal of belief in his new squad since his arrival in the summer. A move to Devon following his departure from Bradford City sees him bring experience from the higher leagues of England and Scotland to St James Park as he sets about helping the Grecians to success. The midfielder says he has enjoyed life at the club so far and is optimistic that the Grecians can go on to have a positive season in Sky Bet League Two. 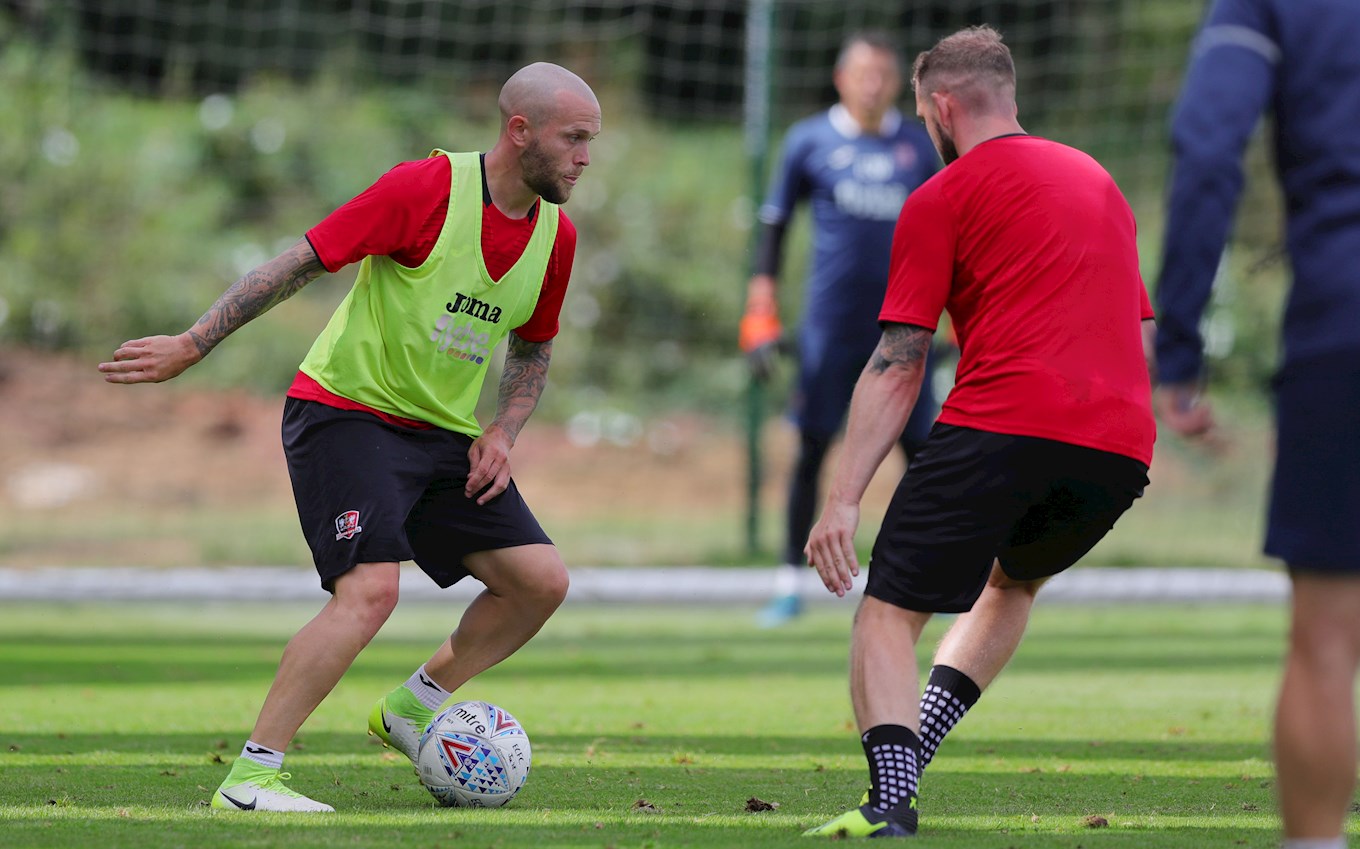 “I’ve settled in well,” explains Nicky. “The lads have been good with me, as well as the other new boys. Half the squad are staying at Fingle Glen at the moment so that’s probably helped because I’ve been able to spend time with some of the boys away from the pitch as well.

“My family have come down for a bit and we’ve seen quite a lot of the area, so it’s really nice. I’ve not got a bad word to say about the place.”

Having turned out for the likes of Sheffield United, Motherwell and Rangers, Nicky has played at a number of different stadiums throughout his career. From going toe-to-toe as a youngster with the likes of Cristiano Ronaldo, Paul Scholes and Wayne Rooney in his younger days as he got a taste of Premier League action, what does the new City midfielder think of his new surroundings and the City supporters?

“I think I’d only played there (at St James Park) once before in my career a long time ago, and I remember the old grandstand where the changing rooms used to be.

“The new stand is impressive, it looks nice and it will be good when it’s open. It’s always a bit strange playing in any stadium where only two sides have people in it, but I don’t think it has affected us because once you’re in the game your concentration is solely on it.

“The atmosphere has been good, particularly in the first game against Carlisle, the fans were brilliant, and I was surprised to see so many people at the Ipswich game as well which was a great turnout for the first round of the cup. The supporters have been great with me and they have backed the team all the way. Even against Lincoln it would have been easy for them to turn on us for the performance, but they backed us, stayed until the end, and it was a good chance for us to go over and thank them for their support. We’ll need them throughout the season.” 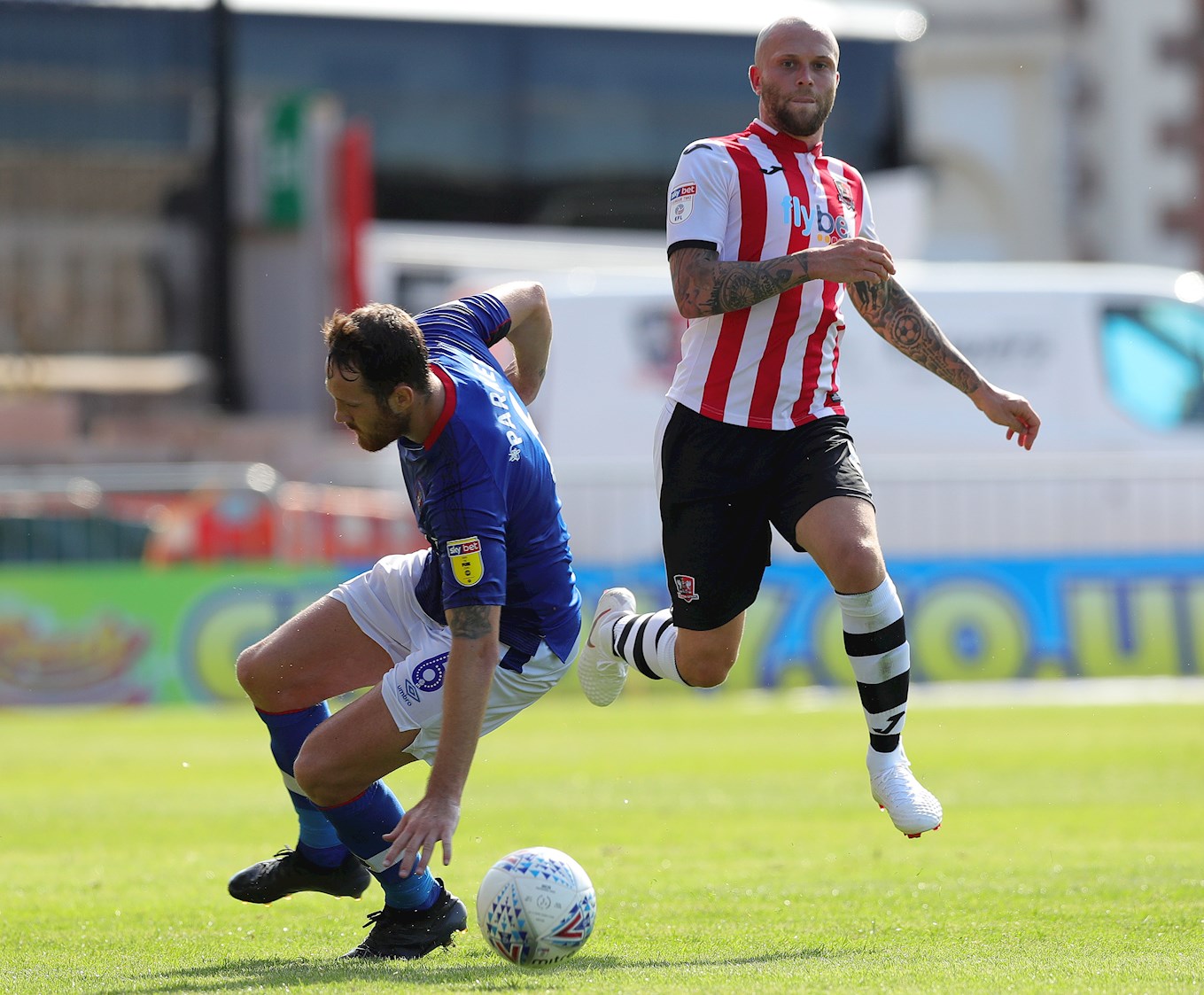 Nicky in action on the opening day win over Carlisle United

Nicky couldn’t have asked for much of a better debut. With a number of faces on show on the pitch and in the dugout, it’s fair to say that the new City number 8 stole the show with a man of the match display against Carlisle United as the Grecians ran out 3-1 winners.

He netted his and City’s first goal of the season, before having a major hand in the other two goals scored by fellow new players Jonathan Forte and Tristan Abrahams. The Grecians grabbed the plaudits in the sun at St James Park on the day and turned out a wonderful performance for much of the match.

“To score my first, and our first, goal of the season was great," smiled Nicky. “We were really good that day and we carried our pre-season form into the game, but we haven’t always been able to quite reach that level again, but I’ve huge confidence that we will get back to that level."

A win on the road over Morecambe saw to it that Nicky’s good start would be temporarily halted when he limped off 37 minutes into the match with the Shrimps with a groin problem. On the setback, Nicky says it was disappointing to suffer the injury after starting off so brightly.

He continued: “I was disappointed to pick up the injury at Morecambe because I don’t usually get muscle injuries. I don’t know if it had something to do with the nine-hour journey the day before after we got stuck in traffic. It was my first movement of the game, I just felt my groin and then I couldn’t recover. It stopped my momentum a little bit because it was a great debut the week before. The injury meant that I had to miss a couple of games.”

But with the 5-1 win over Notts County and a hard fought 2-1 win on the road at Mansfield, where Nicky found the net, he says that even if results don't go City's way at times, there are good players in the dressing room to guide the squad through.

He continued: “They are good lads here with a lot of experience, so there certainly won’t be any panic from ourselves, but of course, we need those experienced heads to help in situations where you do have bad weeks. It’s about how you bounce back, I can see a real determination in the squad."